Gold chopped lower today, with most of the damage happening just after the US open. The long black candle was a bullish continuation, but forecaster dropped, moving into a downtrend. Gold is still in an uptrend in the weekly and monthly timeframes.

Futures markets are projecting a 5.5% percent chance of a rate cut at the next FOMC meeting. 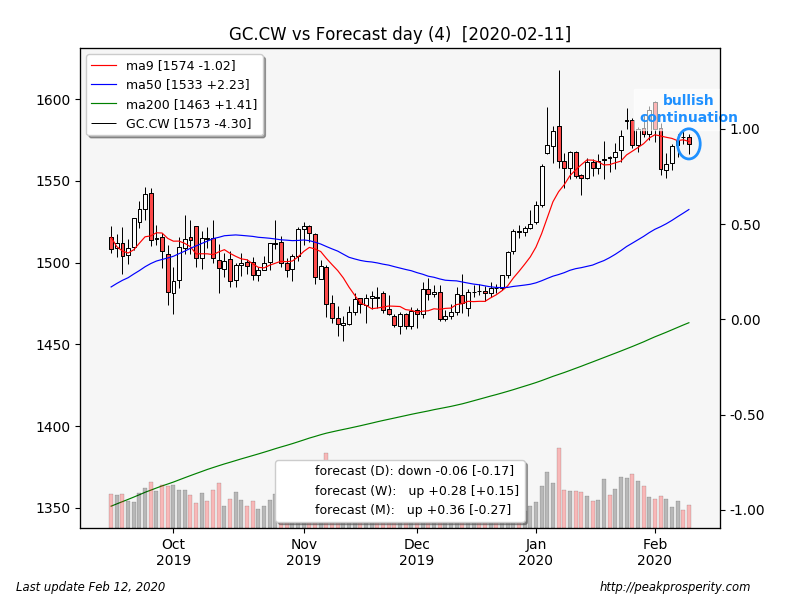 Silver fell for most of the day, with the day low happening at roughly 1pm. The long black candle was neutral, and forecaster climbed, moving higher into its modest uptrend. Silver is in a downtrend in both the weekly and monthly timeframes. 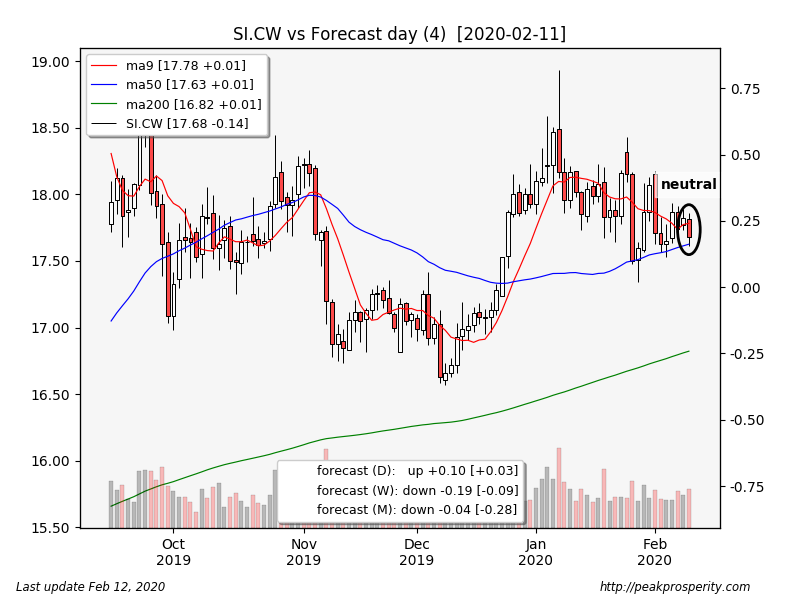 The miners chopped largely sideways today. GDX rose +0.14% on moderately light volume, while GDXJ fell -0.34% on light volume. XAU climbed +0.02%, the high wave candle was a possible bearish reversal (33%), but forecaster climbed, moving into an uptrend. XAU is in a downtrend in both the weekly and monthly timeframes. 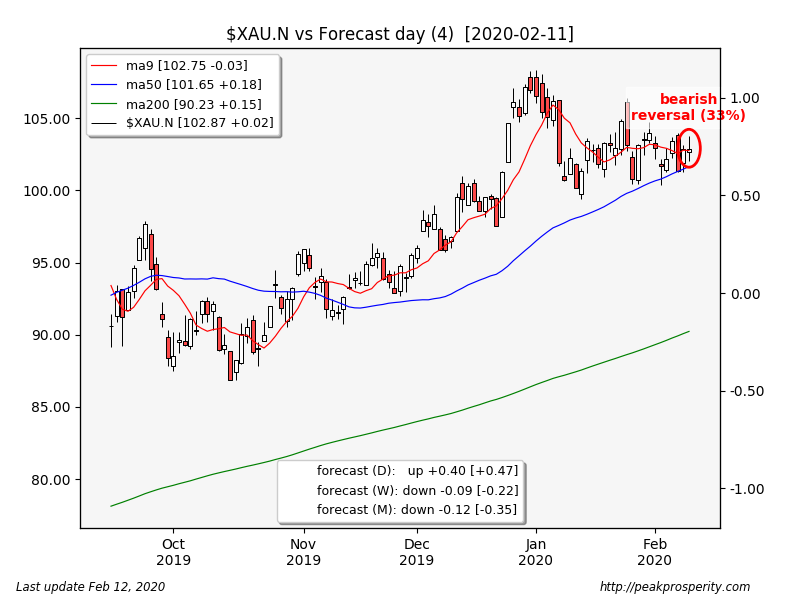 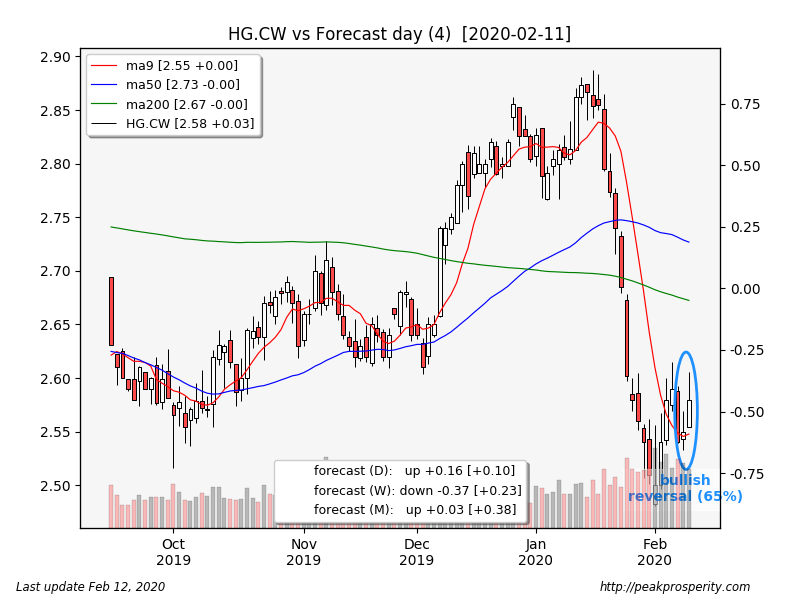 The buck fell -0.12 [-0.12%] to 98.35 on moderate volume. The dark cloud cover candle was a possible bearish reversal (37%), and forecaster dropped, but remains in an uptrend. The buck remains in an uptrend in all three timeframes.  It looks like the buck took a rest today after a long move higher. 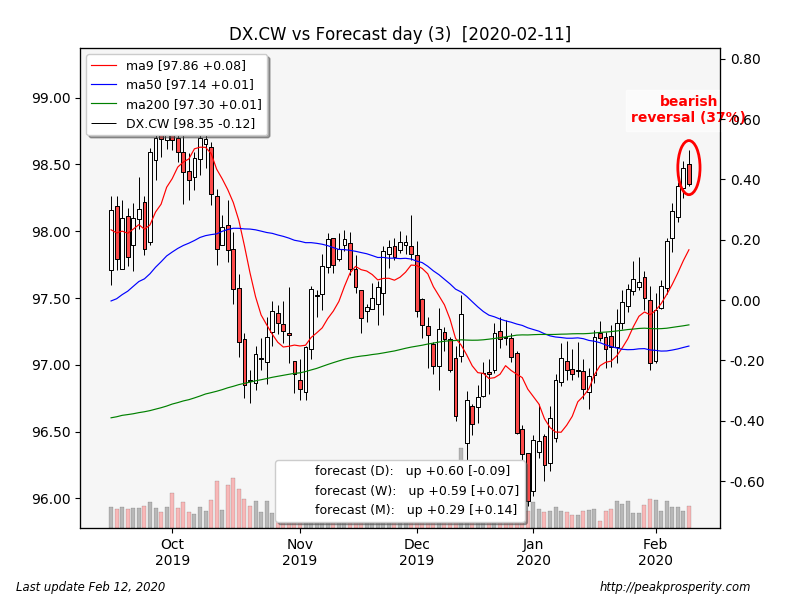 Crude rallied +0.36 [+0.72%] to 50.29 on moderate volume. The spinning top candle was a bearish continuation, and forecaster climbed, but remains in a downtrend. Crude is still in a downtrend in all three timeframes.

Crude attempted to rally today but the rally largely failed. Crude remains below its 9 MA which appears to be acting as resistance; that’s a negative sign for crude. Crude is hovering just above round number 50.  A serious break below 50 could lead to a lot of selling – and also, promises by OPEC+ to stem the plunge by promising to restrain production. 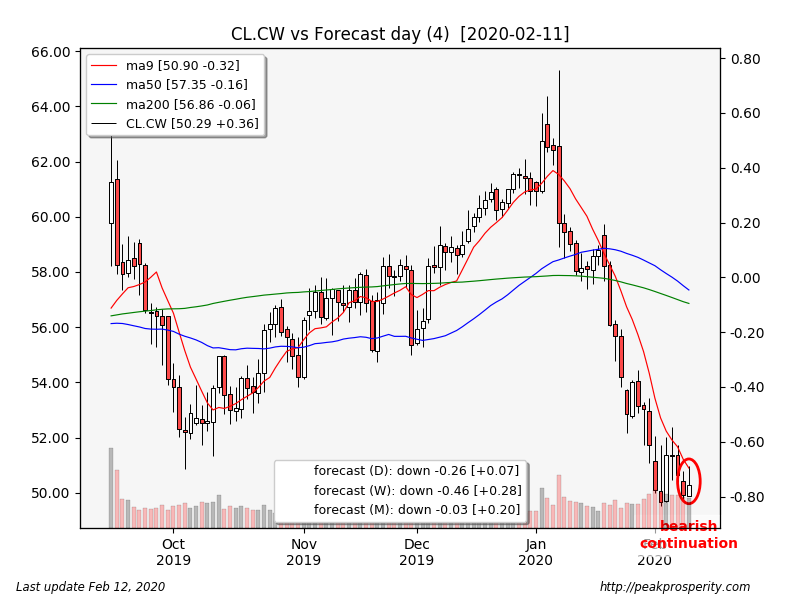 SPX rose +5.66 [+0.17%] to 3357.75 on moderate volume. SPX tried to rally today but the rally largely failed. The long black candle was a bullish continuation, and while forecaster dropped, it remains in an uptrend. SPX is still in an uptrend in all three timeframes.

TY dropped -0.25%. The swing high candle was (surprisingly) neutral, but forecaster fell, dropping into a downtrend. TY remains in an uptrend in the weekly and monthly timeframes. The 10-Year yield rose +3.0 bp to +1.59%. 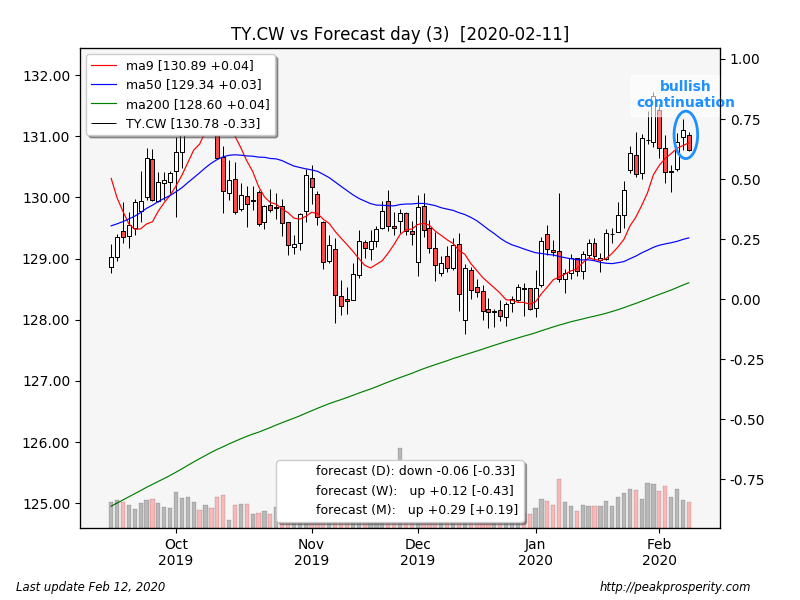 JNK inched up +0.04%. The opening black marubozu candle was a reasonably strong bearish reversal (44%), and forecaster dropped, but remains in an uptrend. JNK is in an uptrend in the daily timeframe. 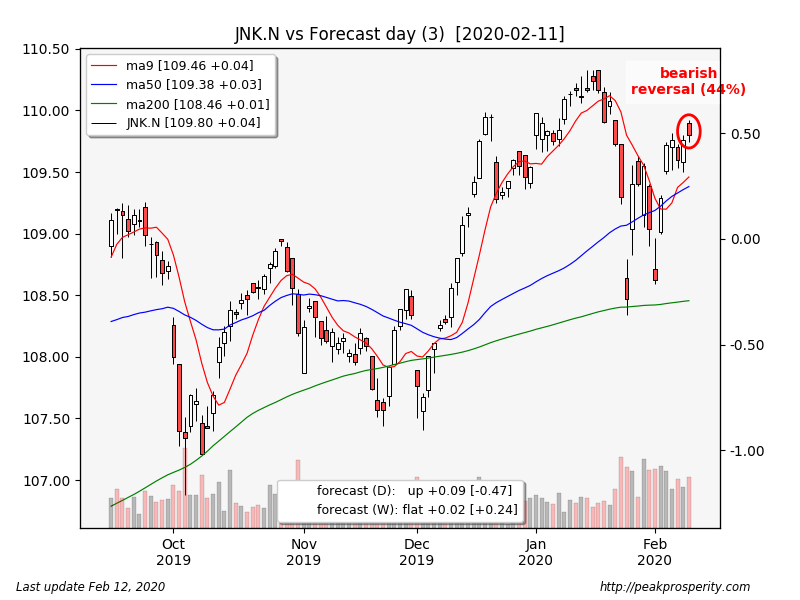 The two coal-mine canaries – copper and crude – were mixed. Copper moved higher (printing a bullish-looking swing low) while crude tried to rally but failed. Crude is hovering just above round number 50.

Diamond Princess (cruise ship) update: 53 more people tested, revealing 39 new positive cases (among them a quarantine official!), bringing the total to 174. 4 people are in the ICU. Testing was expanded to anyone with symptoms as well as close contacts with other infected passengers or crew. 80% of passengers are 60 or over. Many years ago, a friend of mine worked on a Holland America cruise ship for several years as an entertainer. He used to describe cruise ship passengers as belonging to one of three groups: “the newly wed, the over fed, and the nearly dead.”

The unfortunate passengers on this ship will likely provide us with a worst case analysis on both infectivity as well as the serious case rate and the success of treatment provided by a non-overwhelmed first world nation’s medical system.

Because the number of new cases were alleged to be falling in some of China’s provinces, the CCP’s medical advisor Dr Zhong Nanshan forecast that the epidemic would peak later this month. Of course, 14 days ago this same guy predicted the epidemic would be peaking about…four days ago. Caveat emptor.

The WHO chief noted that the first vaccine was 18 months away.

With Hong Kong seeing infections apparently via pipes in apartment buildings, and that cruise ship finding large numbers of new cases every time they test more people, it sure appears as though this illness is (most likely) not as lethal as feared, but incredibly infectious. My guess is there is an epidemic currently exploding (quietly) in the third world, and we will only find out about this once they start to see a number of severe cases (of wealthy older people) that start to appear in their hospitals. That’s still (perhaps) 2 weeks to a month away.

And in China, will those factories restart? There will be westerners on the ground who have VPNs. Information will leak out. TSLA might be a coal mine canary for that one. In Japan, Nissan just shut down an auto plant due to supply chain issues.

Crude and copper are still the things to watch, in my opinion. Copper looks hopeful (perhaps due to happy noises from the CCP’s “Dr Social Harmony”), but crude does not.