Gold chopped sideways in a fairly narrow range today. The doji/NR7 candle was a bullish continuation, and forecaster climbed, rising into an uptrend. Gold is now in an uptrend in all three timeframes. 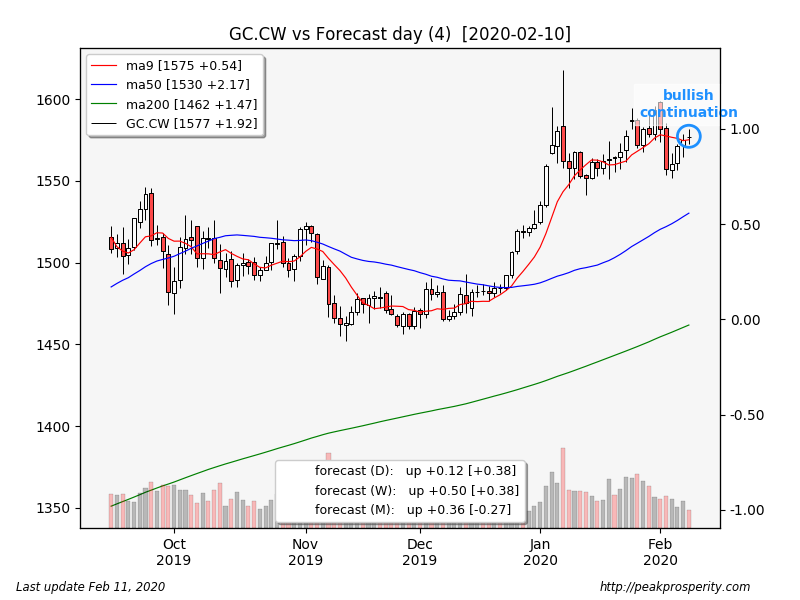 Silver chopped slowly higher today, fading a bit into the close. The short white/NR7 candle was unrated, and forecaster climbed, moving higher into its uptrend. Silver remains in a downtrend in both the weekly and monthly timeframes, but the monthly downtrend is quite weak. 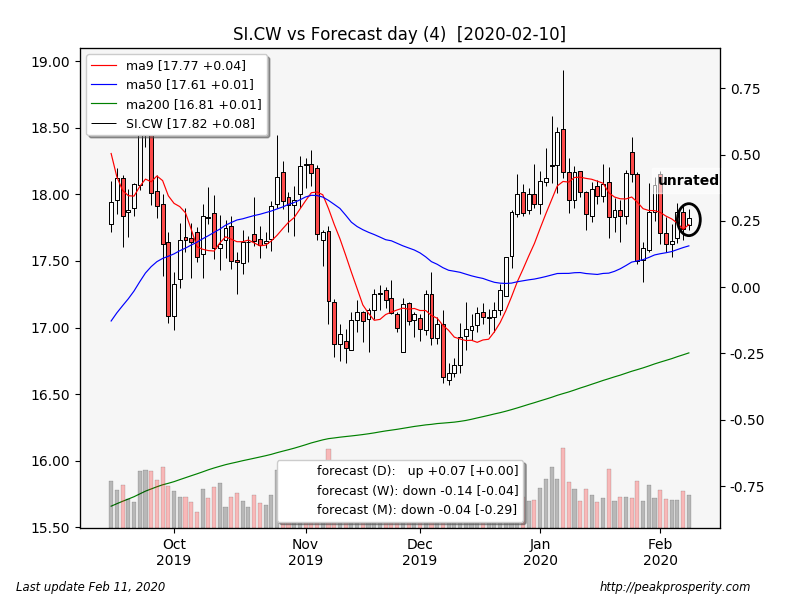 The miners gapped up at the open, and rallied for much of the day. GDX moved up +1.65% on moderately light volume, and GDXJ rallied +1.74% on moderate volume. XAU rose +1.50%, the bullish harami was a possible bullish reversal (32%), and forecaster moved higher, but remains in a downtrend. XAU remains in a downtrend in all three timeframes, but the miner downtrends remain fairly weak. XAU does seem to have found support at its 50 MA, and it managed to squeak back across its 9 MA today – both are positive signs. 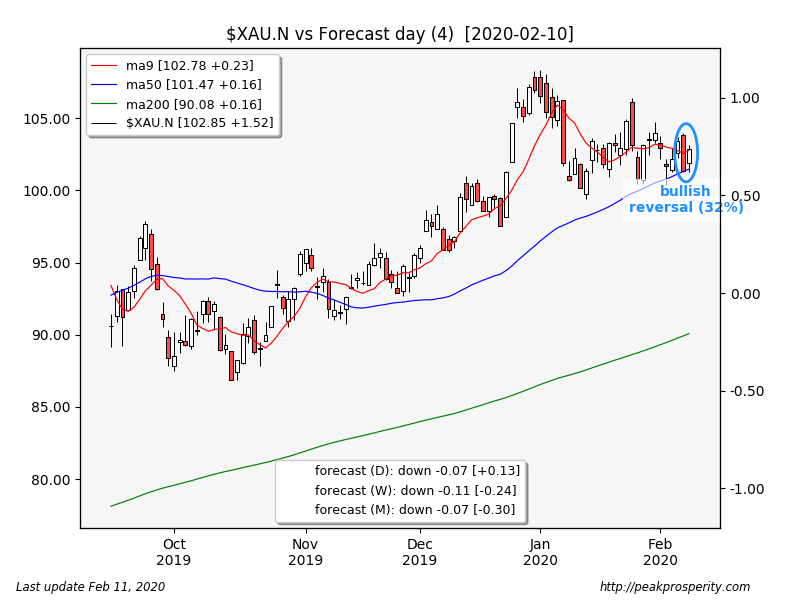 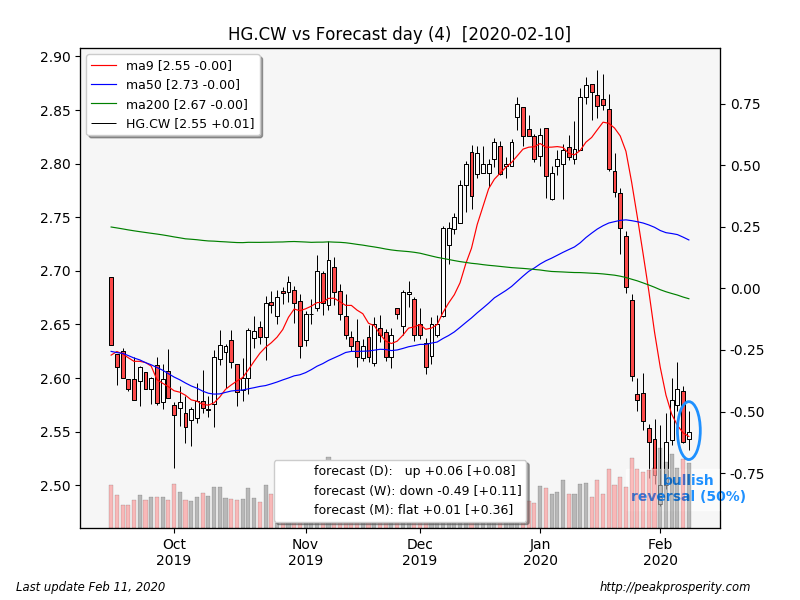 The buck moved up +0.13 [+0.13%] to 98.47 on moderate volume. The long white candle was a bullish continuation, forecaster dropped, but remains in an uptrend. The buck is in a strong uptrend in all three timeframes. The buck continues its steady move higher, and is now closing on the previous (September 2019) high of 99.33.

The buck looks really strong at the moment. 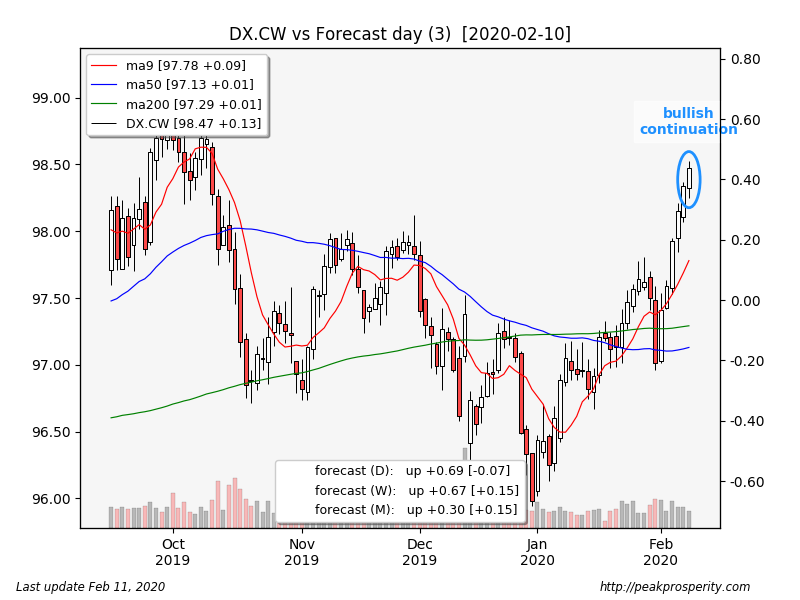 Crude fell -0.71 [-1.40%] to 49.93 on moderate volume. The short black/NR7 candle was a bearish continuation, and forecaster fell, dropping into a downtrend. Crude is back in a downtrend in all three timeframes. Will round number 50 support hold? If not, next support is the previous low down around 42 and change. Ouch. 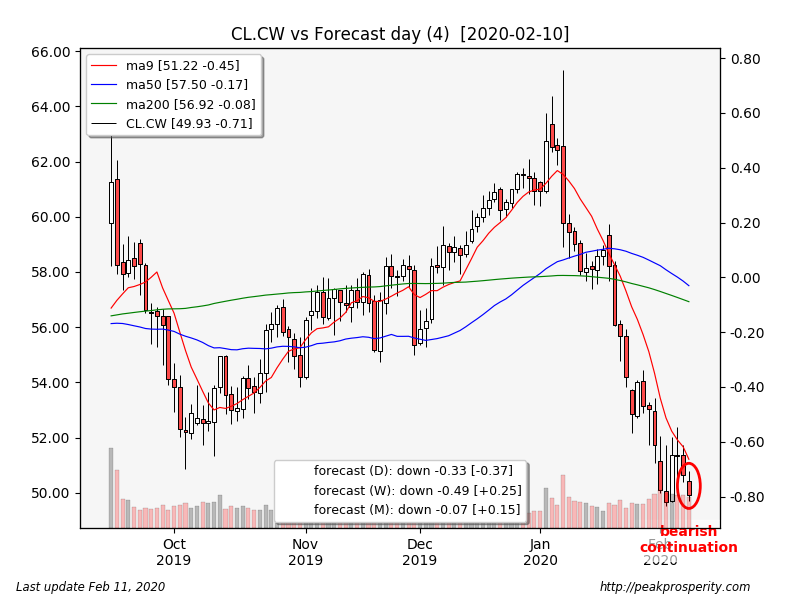 SPX rallied +24.38 [+0.73%] to 3352.09 on moderate volume. Today’s rally took place entirely during market hours, for a change. The white marubozu candle was a bullish continuation, and forecaster climbed, moving higher into its uptrend. SPX is in an uptrend in all three timeframes. Today marked yet another new all time high for SPX.

TLT rose +0.28%. The short black candle was a bullish continuation, forecaster climbed, moving higher into its uptrend. TLT is in an uptrend in the daily and weekly timeframes. The 30-Year yield fell -2.0 bp to +2.03%.

TY moved up +0.15%. The spinning top candle was a bullish continuation, and forecaster climbed, rising into an uptrend. TY is back in an uptrend in all three timeframes. The 10-Year yield fell -3.0 bp to +1.56%.

In spite of the new all time high in equities, bonds did reasonably well today. 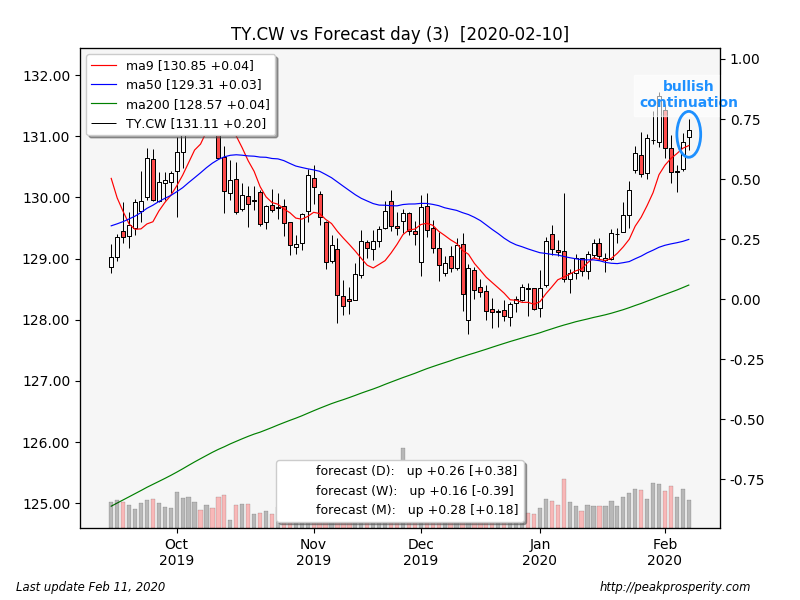 JNK climbed +0.15%. The long white candle was a bullish continuation, and forecaster climbed, moving higher into its uptrend. JNK is in an uptrend in the daily timeframe. JNK isn’t looking nearly as bullish as equities, but neither is it selling off.

While gold just managed to inch higher in dollars today, gold/Euros actually made a new all time closing high. I haven’t been tracking gold/Euros so closely of late – a mistake, as it turns out. Gold/Euros provides quite a different picture of what is going on in the PM space, a picture that is substantially more bullish. 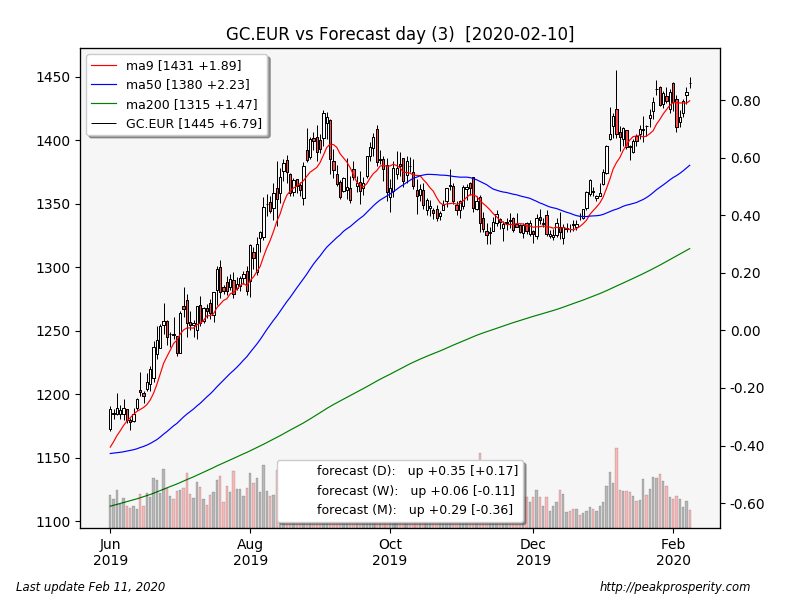 Overall, it looks as though money is flowing into the US, as well as into risk assets, US treasury bonds, and PM. Is this all about money printing? I’m not sure.

Meanwhile, crude is threatening to make a new low, while copper has arrested its decline for now.

China is allegedly “going back to work” this week; that’s probably helping copper to stabilize for now. Bubbly TSLA tried to bounce on the notion that its Shanghai workers were going to start building cars for Chinese consumers to purchase. How long will that last? How many Chinese consumers will run out and buy cars during this time? If all of China turns into Wuhan…the answer is, probably, “none.”

CHS absolutely nails my sense of things with his latest post:

China faces an inescapably fatal dilemma: to save its economy from collapse, China’s leadership must end the quarantines soon and declare China “safe for travel and open for business” to the rest of the world.

[Choice 1] Ending the limited quarantine and falsely proclaiming China safe for visitors and business travelers will only re-introduce the virus to workplaces and infect foreigners who will return home as asymptomatic carriers, spreading the virus in their home nations.

The CCP desperately needs to “find” a fantastic treatment that fixes everything. Or a vaccine. Preferably both, and within the next week or so. How this “vaccine” and “treatment” get mass-produced in the middle of a pandemic and then distributed to every corner of the 1.4 billion person nation…a nation famous for fake products in general and fake vaccines in particular…that will be the next puzzle to solve.

As for uncovering the truth about he virus – my eye is on the Diamond Princess: a cruise ship docked in Yokohama, Japan. Of the 3700 people aboard the vessel, 280 passengers have been tested, and 135 have tested positive. Now we get to see how they progress. This is, most likely, Wuhan in microcosm. Consider: a single passenger that left the ship last month tested positive for corona virus. Now there are 135 infected.

Unlike the CCP, Japan has no motivation to lie about what happens to these cruise ship passengers. Just the opposite, actually – they are strongly motivated to uncover the truth.

I expect when the truth comes out, copper and crude will both suffer, with copper hit the hardest. I’ve given up trying to predict the equity market. Apparently pandemics that shut down supply chains are great for risk assets and crappy debt too. Who knew?

Fantastic article by WAPO.  Must read.  As important as understanding how thoroughly the British owned Germany’s “Enigma” encoding device during WW2.

CIA ran a top crypto company for decades, alongside the BND, basically selling easily crackable crypto gear to pretty much anyone who would buy it.  This included a whole bunch of really interesting places including Libya, Iran, and Argentina, just to name a few.

If you ever wonder why I assume the NSA is reading everything the Chinese are sending to one another, it is because of stories just like this.

For more than half a century, governments all over the world trusted a single company to keep the communications of their spies, soldiers and diplomats secret.

The company, Crypto AG, got its first break with a contract to build code-making machines for U.S. troops during World War II. Flush with cash, it became a dominant maker of encryption devices for decades, navigating waves of technology from mechanical gears to electronic circuits and, finally, silicon chips and software.

The Swiss firm made millions of dollars selling equipment to more than 120 countries well into the 21st century. Its clients included Iran, military juntas in Latin America, nuclear rivals India and Pakistan, and even the Vatican.

But what none of its customers ever knew was that Crypto AG was secretly owned by the CIA in a highly classified partnership with West German intelligence. These spy agencies rigged the company’s devices so they could easily break the codes that countries used to send encrypted messages.

Gold was a sell today.  And yesterday too, but today all my models agreed, today was a red day.  FWIW. 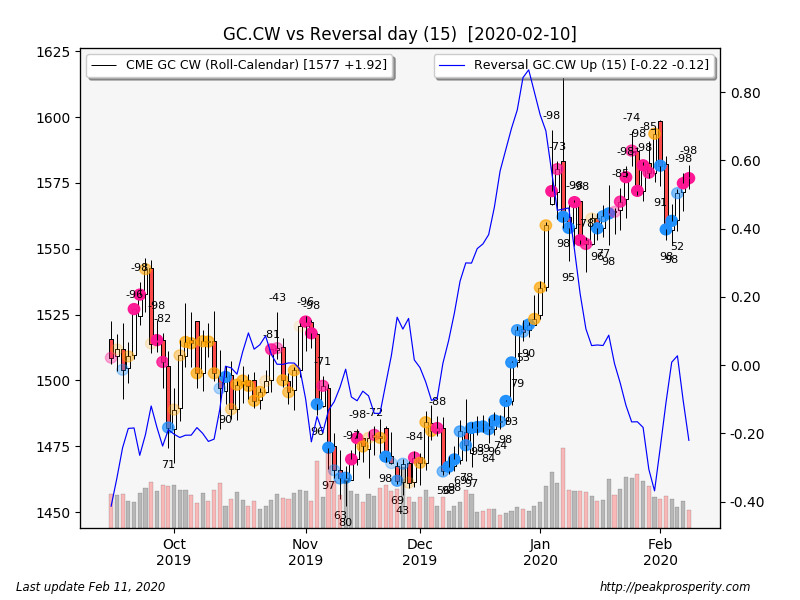 “Apparently pandemics that shut down supply chains are great for risk assets and crappy debt too. Who knew?”

Actually, I heard that the first market bubble, the tulip mania, occurred while the bubonic plague wiped out 30% of the dutch population.

I lost my options virginity today! I bought VIX call options three and four months out as part of the continuous VIX hedge strategy I talked about a month ago.

I will definitely lose money as I buy a new 120-day contract each month, but nothing more than a nice dinner with drinks. Perhaps it will pay me back one day.

All the best to you Mr. Dave