Gold moved lower all day long, with the bulk of the move happening after the US market opened. The strong line/swing high candle pattern was a probable bearish reversal (55%), and forecaster dropped hard, but remains (just barely) in an uptrend. Gold remains in an uptrend in all three timeframes, but both daily and weekly uptrends look more than a little frail.  Still, gold remains above all 3 moving averages, which is a positive sign. 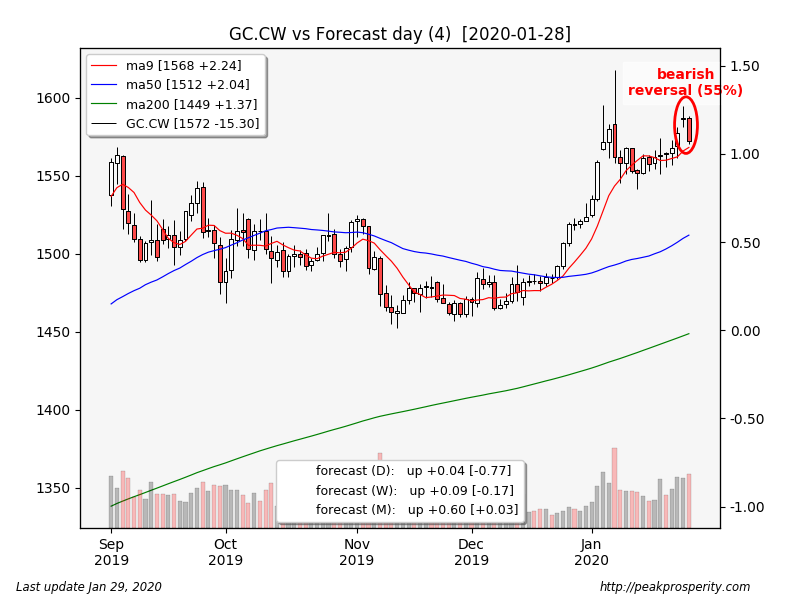 Silver edged lower in Asia, but fell off a cliff during the London session, and the selling didn’t stop literally until the close in New York. The strong line/swing high candle pattern was a probable bearish reversal (51%), and forecaster cratered, plunging silver into a downtrend. Silver is now in a downtrend in both the daily and weekly timeframes. Silver’s plunge took it clean through the 9 MA, right down to the 50 MA.  That’s bearish. 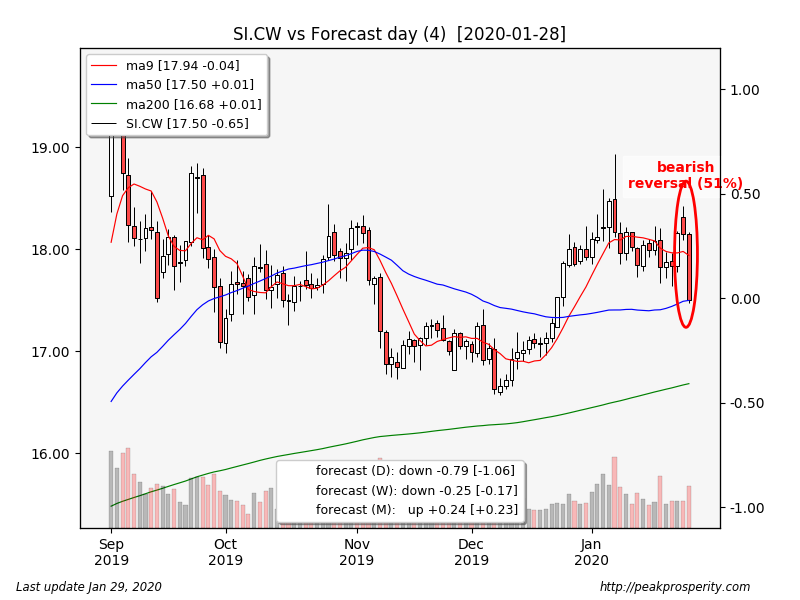 The miners moved lower for most of the day, managing to bounce slightly into the close. GDX fell -2.65% on moderate volume, while GDXJ dropped -2.61% on moderate volume. XAU moved down -2.30%, the swing high candle was a likely bearish reversal (62%), and forecaster dropped, moving deeper into its downtrend. XAU is in a downtrend in both the daily and weekly timeframes. Today’s move took the miners below the 9 MA, which is a bearish sign, although they have yet to make a new low. 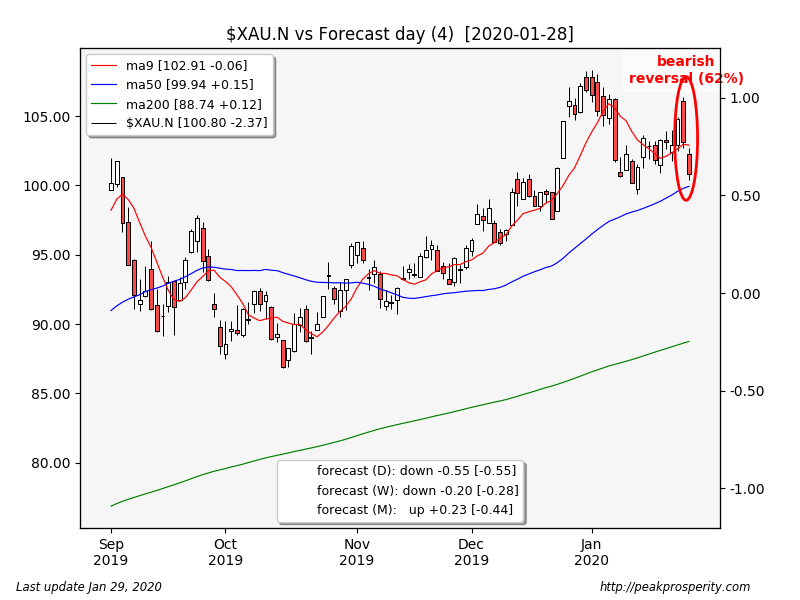 The buck moved up +0.07 [+0.07%] to 97.64 on moderate volume. The spinning top candle was a possible bearish reversal (36%), forecaster climbed, moving higher into its uptrend. The buck is in an uptrend in all three timeframes. This was a new 2-month high for the buck.

Crude rallied +1.13 [+2.14%] to 54.00 on moderate volume. The bullish engulfing/swing low2 candle was a reasonably strong bullish reversal (48%), and forecaster climbed, but remains in a downtrend. Crude is in a downtrend in both the daily and weekly timeframes, and a no-trend state on the monthly. 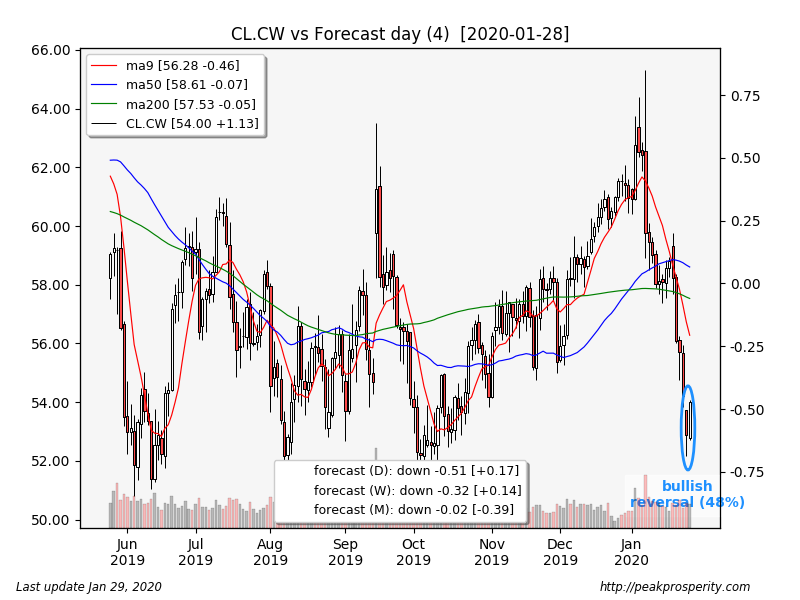 SPX rallied +32.61 [+1.01%] to 3276.24 on moderate volume. Perhaps 40% of today’s rally took place in the futures markets overnight. The bullish tasuki line candle was a probable bullish reversal (58%), forecaster climbed, but remains in a downtrend. SPX remains in an uptrend in the weekly and monthly timeframes. 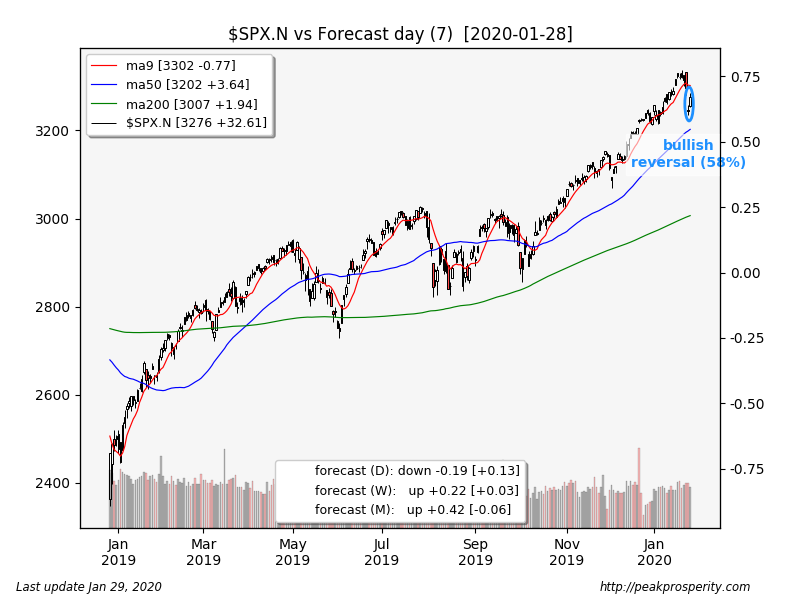 TLT fell -0.78%. The swing high candle pattern was a possible bullish reversal (37%), and forecaster dropped, but remains in an uptrend. TLT remains in a strong uptrend in the daily and weekly timeframes. The 30-Year yield rose +5.0 bp to +2.10%. 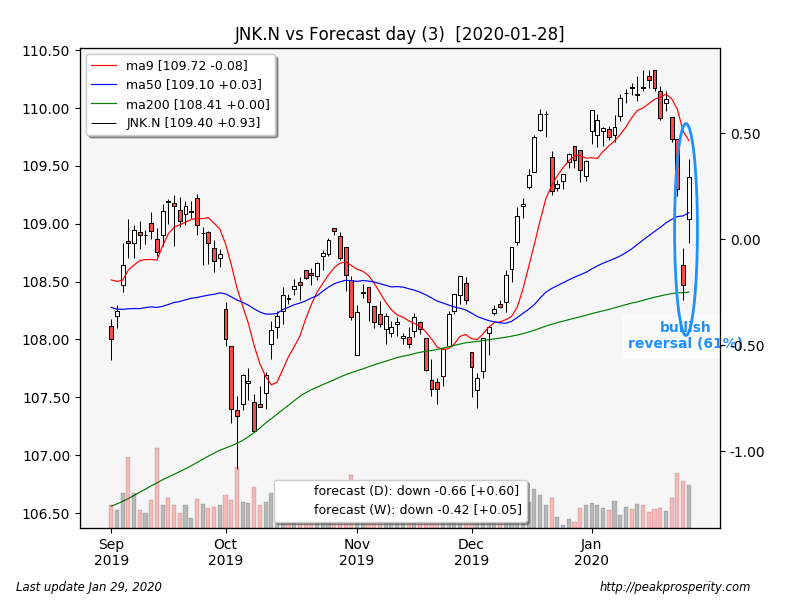 Well I have to say, yesterday the candle code had some low-to-medium percentage predictions of bounces on all the items that had sold off heavily. What do you know – that’s what ended up happening across the board. Whether these bounces turn into actual reversals, or they are simply the usual volatility that happens in a downtrend – that remains to be seen.

JNK and SPX both printed some strong-looking candles, but forecasters have yet to bounce back, and bonds fell, but not substantially.

Are the reversals in PM durable? Does this mark the top for gold?

Longer term, this would seem to depend on the answer to this question: is the pandemic threat over?

I don’t think it is. Do you? To me, copper is providing the tell. While many risk assets rallied today, the best copper could do was print a spinning top candle (bearish continuation) which marked a new low. Copper = China, and China is in deep doo doo.

However, this will take a while to play out. Just looking at the news, “Impeachment” is deemed to be more critical than the threat of pandemic. And people are pointing out that the 2019-2020 “flu season” has killed off from 8k-20k people in the US.

[CDC says: in the US this season, there were an estimated [using upper-end estimates] 21M flu infections, 250k hospitalizations, resulting in 20k deaths. So with the flu, if its bad enough to get you checked into the hospital, you end up dying maybe 8% of the time. Roughly speaking.]

The ability to do simple math seems to be in short supply, however; if the same number of people get the Wuhan virus, a lot more people will die than just 20k.  And the actions taken to prevent transmission will take a large toll on the global economy also.

But for now, the good news is, if you want to enter short, it looks like there may be another opportunity to so do. I can’t tell you how much longer the bounce will last. But I do think its just a bounce. FWIW.

We do have the FOMC meeting coming up tomorrow as well. What will they say?

This is going to be really interesting. I may have to join the lone wolf trader on this bounce today….

See Cold Rain.  Now you can cheer the pops as well as the drops.;-)

You are not wrong!  I was actually going to wait till the equity market closed before posting, because of the EKG configuration markets usually find themselves in on or just after Fed days.  Certainly good to see. Hopefully, this will mark a bottom.  Powell’s testimony was less than risk-on inspiring but didn’t appear to be overly bullish for PMs in and of itself.

The Fed is pretty much trapped and they know it.  Assuming nCov doesn’t just blow over and dissipate, there are going to be substantial global repercussions.  I’m not sure how that’s not positive for PMs.  I suspect stocks are in for a few days of selling pretty soon.  The close today wasn’t pretty.

Also, it will be nice when we see gold break over the recent Iran highs and hold and silver move higher and hold.  Miners have moved steadily higher, but they haven’t really shot up in big surges like we’ve seen previously.  That is a little bit of a red flag to me, but it was nice to see some short covering in the metals over the last couple of days.