Today’s moves were driven largely by concerns over the Wuhan virus.

Gold gapped up at the open on Sunday evening, then chopped mostly sideways for the remainder of the day. The gap up doji candle was a bullish continuation, and forecaster climbed, moving higher into its uptrend. Gold remains in an uptrend in all three timeframes.

Futures are projecting a 13% chance of a rate increase at the Fed meeting on 29 January – happening in just two days. Is anyone paying attention?

Re gold OI: I suspect a large number of shorts bailed out at the open. Who wants to be short gold with a potential pandemic in the offing? Gold’s projected uptrends right now are extremely strong.  Today also marked a new 6-year closing high. 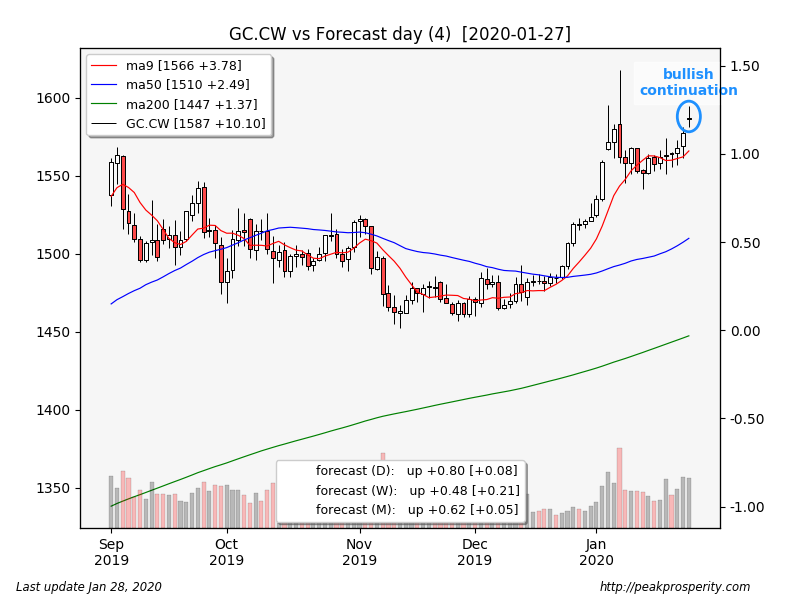 Silver dropped -0.01 [-0.06%] to 18.15 on moderate volume. The long black candle was a bullish continuation, forecaster dropped, but remains in an uptrend. Silver is in an uptrend in the daily and monthly timeframes.

The gold/silver ratio climbed +0.60 to 87.45. Silver seriously underperformed gold today, although it is not showing any signs of a bearish reversal. 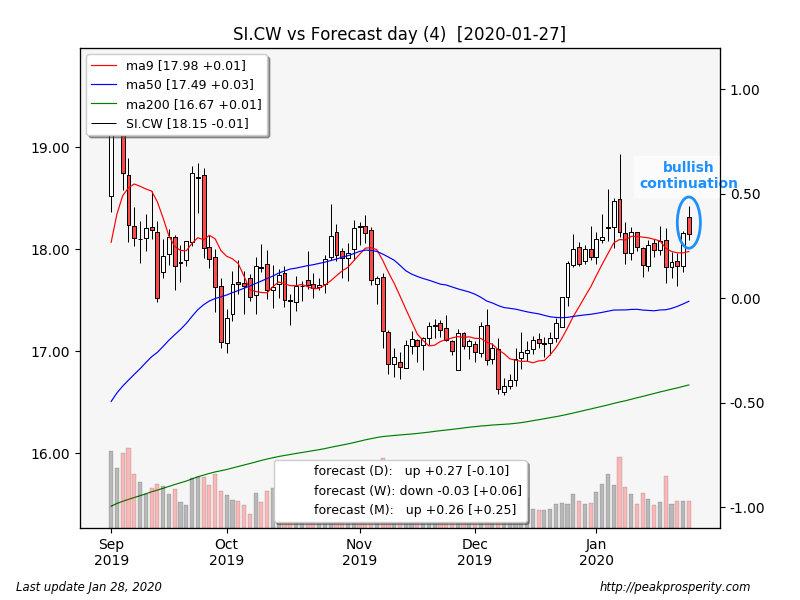 The miners gapped up at the open, but sold off fairly hard in the first few minutes of trading, and then spent the day moving mostly lower, closing near the lows of the day. GDX fell -0.48% on moderate volume, and GDXJ dropped -1.15% on moderate volume. XAU plunged -1.57%, the dark cloud cover candle was a reasonably strong bearish reversal (43%), and forecaster dropped, moving into a state of no-trend. XAU is now in an uptrend in just the weekly and monthly timeframes.

The miners are showing hints of a short-term bearish reversal.  It was a really big dark cloud cover today. 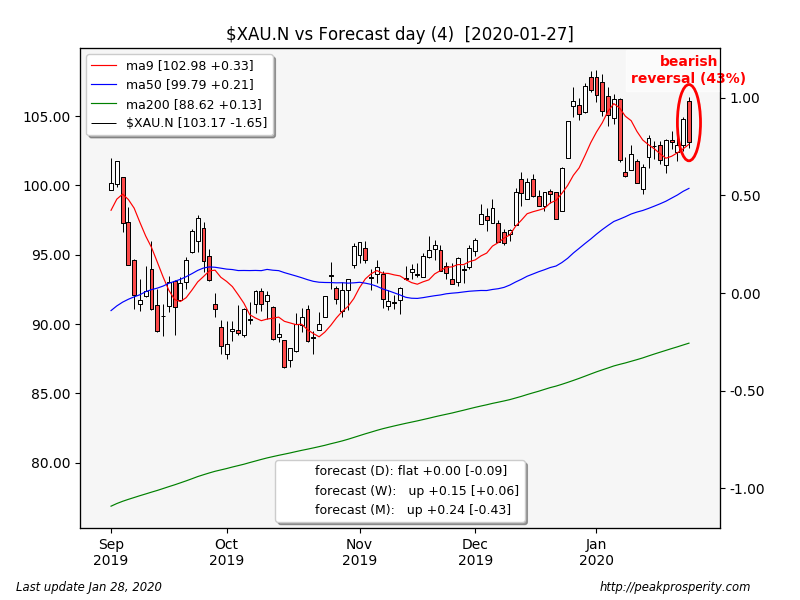 Platinum dropped -21.60 [-2.19%], palladium cratered, falling –149.99 [-6.93%], and copper plunged -0.08 [-3.19%]. It was a terrible day for the other metals, with palladium leading the way. While palladium fell hardest, the move in copper was perhaps more revealing of the larger picture. Copper made a new 4-month low, dropping below the 2.60-2.61 support zone, and it is showing no signs at all of even slowing down. And as we know, copper is all about the predicting the prospects of China’s economy: Dr Copper says, “things are bad, and they are getting worse.”

The buck moved up +0.10 [+0.10%] to 97.57 on very heavy volume. The short white/NR7 candle was a bullish continuation, forecaster dropped, but remains in an uptrend. The buck is in an uptrend in all three timeframes. Today marked a new 2-month high for the buck.

Crude fell -1.33 [-2.45%] to 52.87 on moderately heavy volume. Crude gapped down and then sold off hard early in Asia, but managed to recover somewhat by end of day. The opening black marubozu candle was a possible bullish reversal (38%), and forecaster climbed, but remains in a downtrend. Crude remains in a downtrend in all three timeframes.

While crude wasn’t hit as badly as copper, it too is in a very sharp downturn. Will support at 52 stop the bleeding? I think it will depend entirely on the pandemic news. Crude is now down $10 over the last 3 weeks. 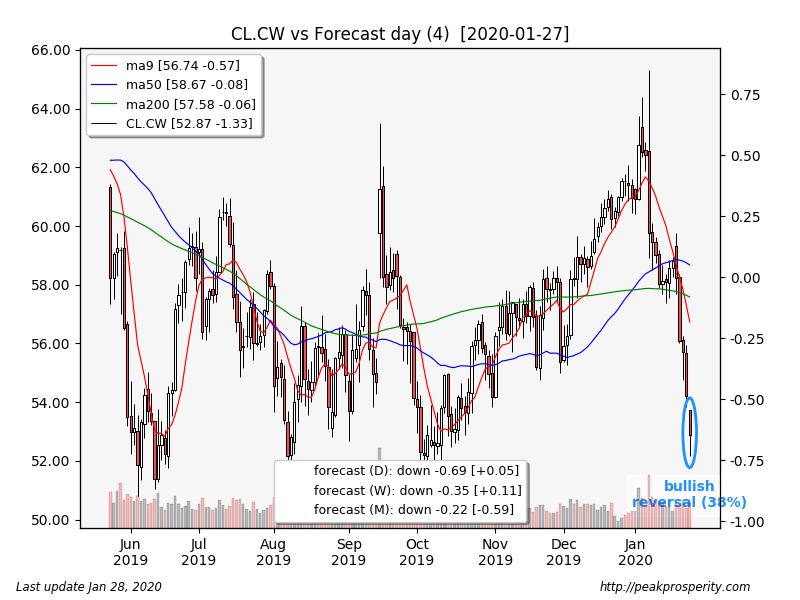 SPX dropped -51.84 [-1.57%] to 3243.63 on moderately heavy volume. All of the damage happened in the futures markets overnight; SPX just chopped sideways during the US market. The high wave candle was a reasonably strong bullish reversal (49%), but forecaster plunged, moving deeper into its downtrend. SPX remains in an uptrend in the weekly and monthly timeframes.

Will we get a (dead cat) bounce here?  Candle code suggests we might. 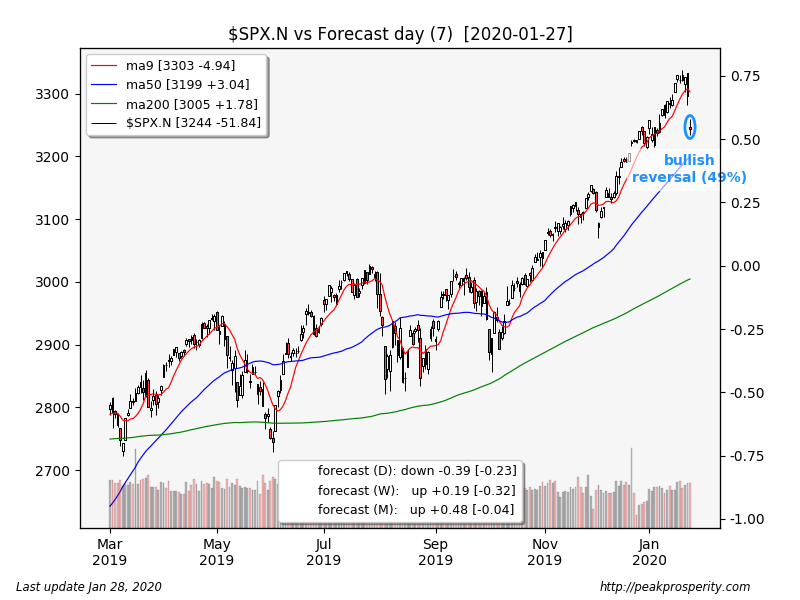 TLT jumped +1.56%. The spinning top candle was a bullish continuation, forecaster climbed, moving higher into its uptrend. TLT is in a strong uptrend in both the daily and weekly timeframes. The 30-Year yield fell -9.0 bp to +2.05%.

TY rallied +0.46%. The long white candle was a bullish continuation, forecaster climbed, moving higher into its uptrend. Today’s move pulled TY monthly into an uptrend; TY is now in an uptrend in all three timeframes. The 10-Year yield fell -10.0 bp to +1.60%.

Bonds had a very good day. Unlike gold, they gapped up at the open, and moved steadily higher through to the close.  Today marked a 4-month high for the 10-year. 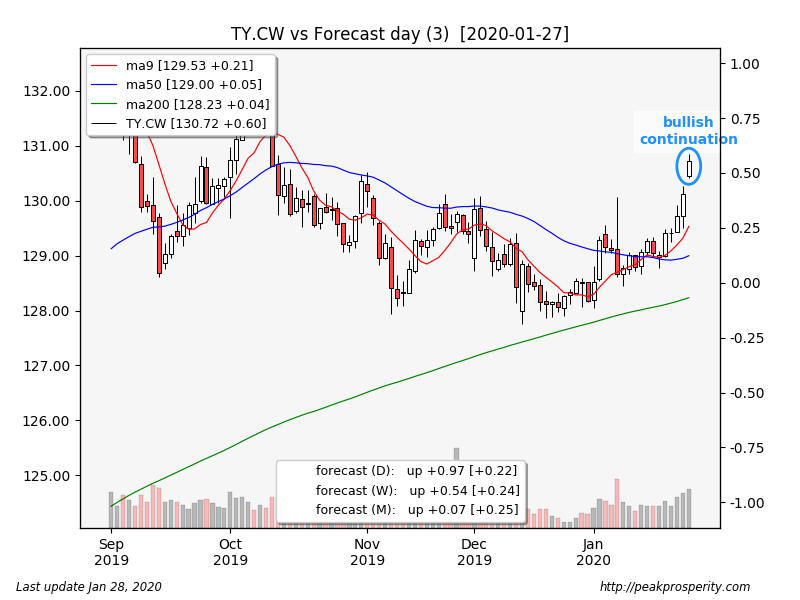 JNK absolutely cratered today, dropping -0.76%. Most of the damage came from the large gap down open, but an attempt at a rebound was sold fairly briskly in the last hour of trading. That is a bad sign; traders didn’t want the risk of holding even overnight. The long black candle was a possible bullish reversal (32%), but forecaster dropped, moving deeper into its downtrend. JNK is in a strong downtrend in both the daily and weekly timeframes.

Crappy debt does not like the Wuhan virus at all.  It does look as though the candle code likes huge gap down moves at least a little. 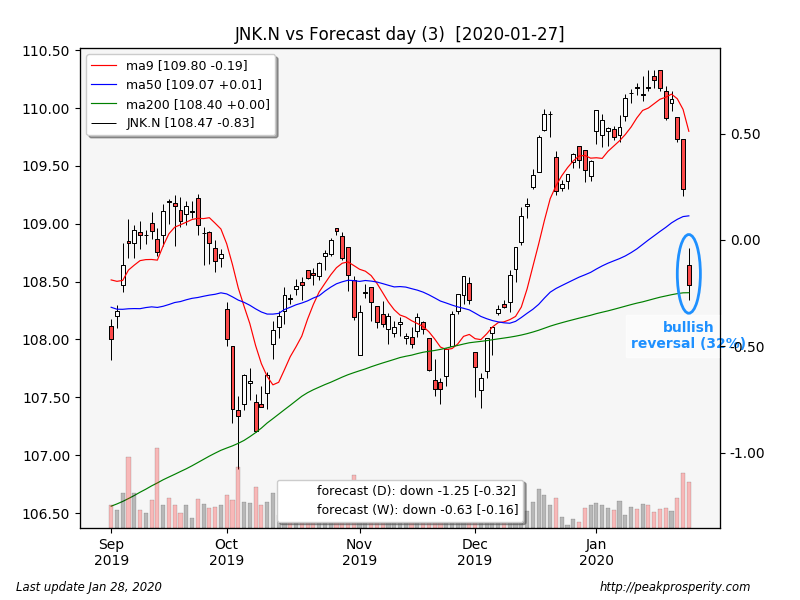 I’m going to lead with the sorted forecaster daily map because this one table really says it all:

The models are painting a very clear picture: they are forecasting a likely global economic slowdown, with China being hit the hardest.

The list is also a really good object lesson for anyone with money in the markets: don’t be in crappy debt when things start to turn south. Likewise, both crude and copper are also problematic, and if you expect bad things to happen to China, well – going short copper is a pretty good idea. [Doh!]

One problem with the PM mining shares: they don’t only mine gold, they also mine copper and the other metals also, and so they tend to get hit when the price of the metals group drops, which is what we saw today.

Silver is caught in the middle; it is tugged higher by gold, but pulled lower by copper and platinum.

Safe havens: bonds first, starting with the 30-year, then the 10-year, and then gold. Big money races to hide in the largest liquid market, and that’s US long term treasury debt.

So that’s where we are: the concern over the virus continues to increase. The best proxy for this, to my mind, is copper. I’ll leave you with a copper daily chart… 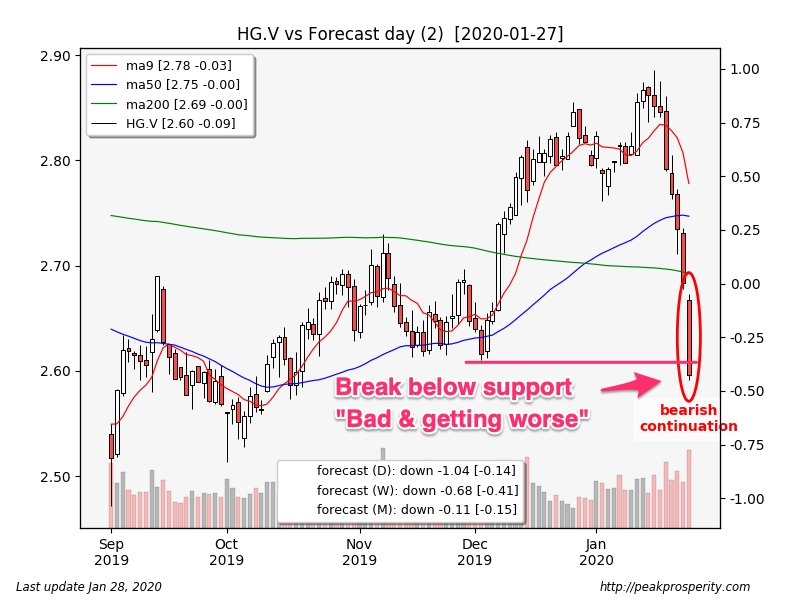 Time for a good old fashioned PM crash.  Silver getting crushed and miners now finally giving up the ghost.  Gold is down $8.00ish, but it looks like it’s just getting started.  Not sure what it’s going to take to get silver back to $20 and stay there for a while.  I assume we need an economic crash for that.

Anyway, it’s been a good run for the space over the past year or so.

Whoa, did they fix the pandemic issue while I wasn’t looking?

Don’t worry … as long as the Fed is in control of the markets, the coronavirus does not exist.  The Fed has the virus under control.  Nothing to see here.  The Fed can reduce the R0 by injecting fiat into the repo market.  Go back to work and go shopping.

Not asking for investment advice or anything….. 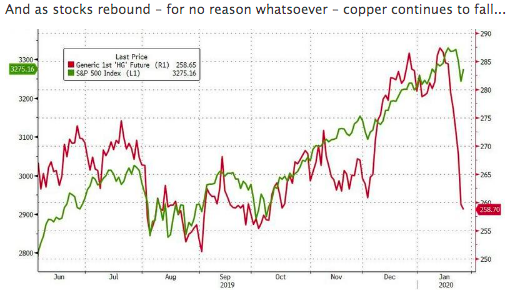 I’ve just been looking for a buying opportunity and there it is.  I’ve got money coming in from my palladium and rhodium sale and two other sources and was hoping gold and silver would soften up a bit.  Hope they drop more and I’ll pull the trigger because you know it’s not going to stay down.  The trend is your friend and the trend is upward.  Central banks are amassing gold.  The East is amassing gold and power, both economic and military, is shifting to the East.  It all looks good for gold and its little brother, silver.

First is to short one of the copper mining stocks.  FCX is the world’s largest miner.  I don’t follow it closely.  You could short it.

The second is a metals ETF.  I only found it by using google: CPER.  It has reasonable volume.  You could short it.

Of course you can also use HG futures, but…you need to sign up for futures trading for your account, and it looks as though the leverage is pretty high: $250 in contract movement per penny of underlying movement.

You might consider waiting for a bounce, or at least, just adding 1/2 a position right now, with the idea to add more on a bounce, if one occurs.