Gold tried to rally in Asia, but the rally failed, and then chopped lower for the remainder of the day. The spinning top candle was unrated, forecaster fell, moving deeper into its downtrend. Gold is in a downtrend in both the daily and weekly timeframes.

Gold/euros dropped -5.91 [-0.39%] to 1524.55 on moderate volume. The short black candle was a possible bullish reversal (33%), forecaster dropped, dropping into a downtrend. Gold/euros is in a downtrend in both the daily and weekly timeframes.

Gold looked weak today – not even a decent-sized move lower in the buck was enough to support price. There was a lot of short-covering, so that was a bit of good news, but gold ended the day below both the 9 and 200 MA lines, which is a bearish sign. Gold appears to be slowly moving downhill. 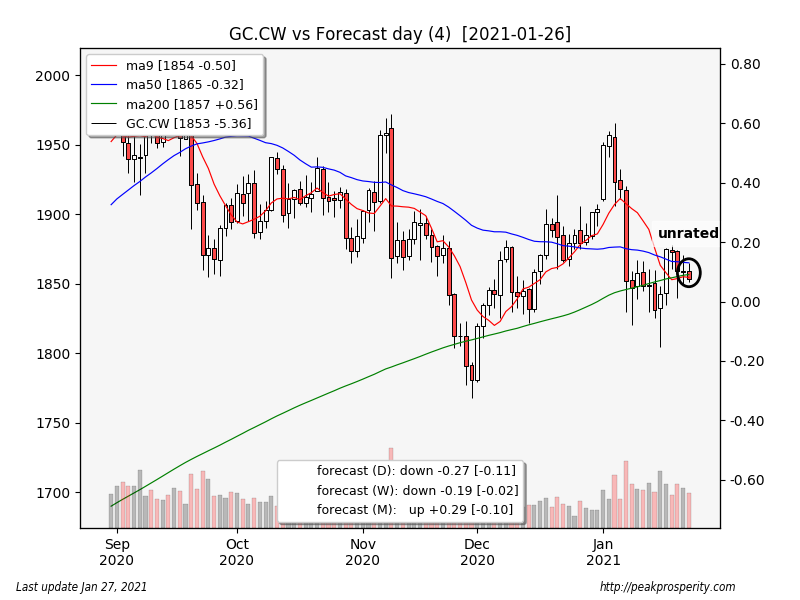 Silver chopped higher today, with the day high coming around 10 am, but then retreating somewhat into the close. The short white candle was unrated, forecaster climbed, rising into an uptrend. Silver is in an uptrend in all three timeframes.

Silver looked stronger than gold today, and in fact managed to close back above the 9 MA, which is a positive sign. Also, there is no impending 50/200 “death cross” for silver. On the chart, it looks as though the 50 MA is providing a rough measure of support for the price over the past few weeks. 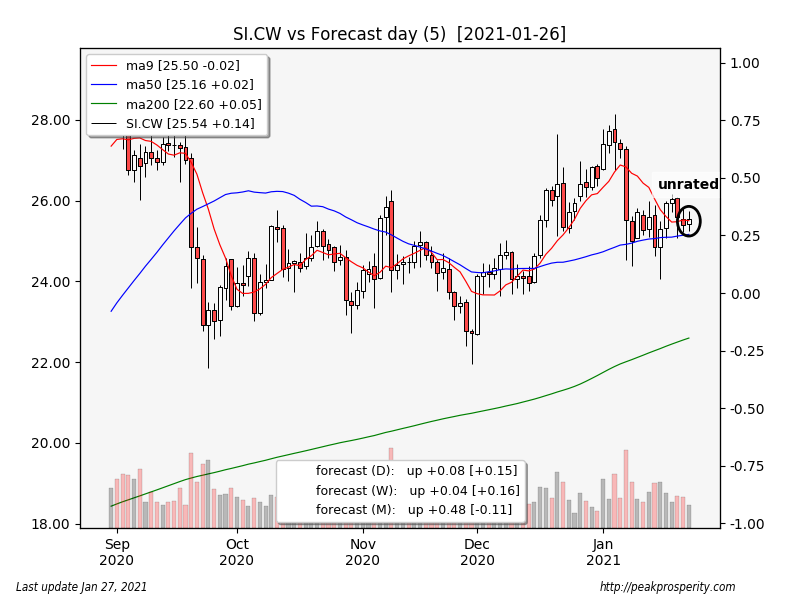 Miners rallied at the open, then sold off slowly for the remainder of the day. GDX fell -0.28% on moderately light volume, while GDXJ climbed +0.24% on light volume. XAU dropped -0.79%, the closing black marubozu candle was unrated, forecaster fell, dropping into a downtrend. XAU is in a downtrend in all three timeframes.

The miners didn’t look good today, making a new multi-month closing low. They remain above the 200 MA, but not by much. 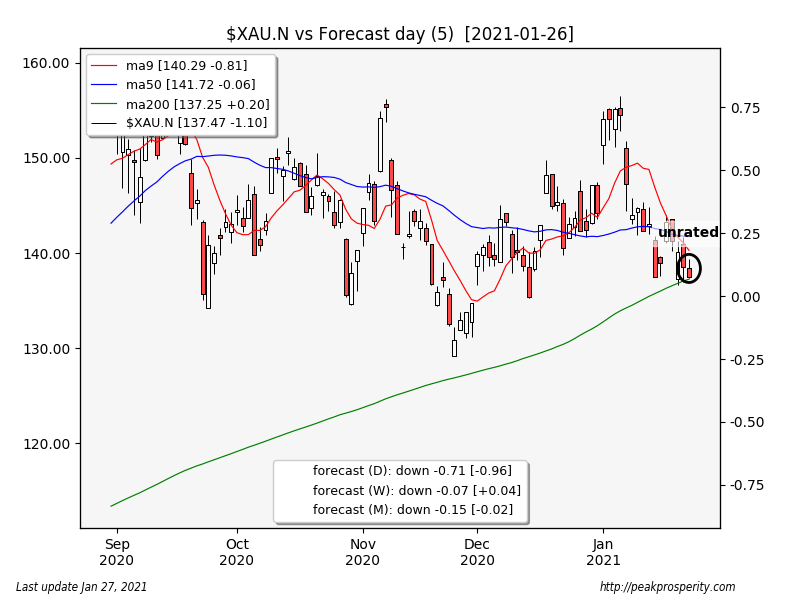 Copper dropped -0.02 [-0.55%] to 3.61 on moderate volume. The hammer candle was a bearish continuation, forecaster climbed, but remains in a state of no-trend. Copper is in an uptrend in the weekly and monthly timeframes.

Today’s move was enough to pull copper back below the 9 MA. The copper miners I follow are getting shellacked (FCX: -6.80% just yesterday) but the metal itself remains in a strong longer term uptrend. I keep waiting for copper to call the top in the pandemic. We’re not there yet. 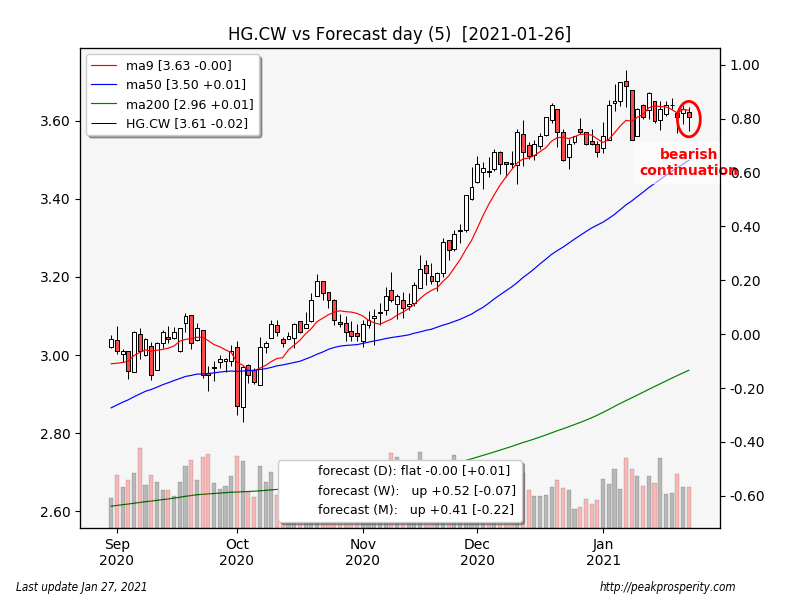 The buck fell -0.22 [-0.24%] to 90.13 on moderate volume. The bearish engulfing candle was a possible bearish reversal (38%), forecaster fell, dropping into a downtrend. The buck is in a downtrend in all three timeframes.

The buck has dropped back into a downtrend. It didn’t seem to help gold much at all. 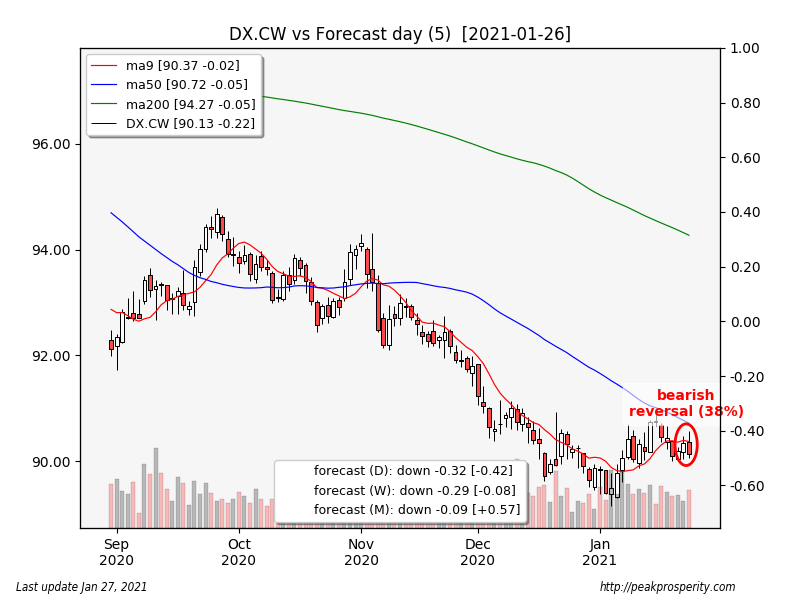 Crude dropped -0.12 [-0.23%] to 52.72 on moderately light volume. The short black candle was a bullish continuation, forecaster climbed, moving higher into its uptrend. Crude is in an uptrend in all three timeframes.

Crude mostly went nowhere today; no change in trend. Crude remains in a mild uptrend, relatively near the recent highs. 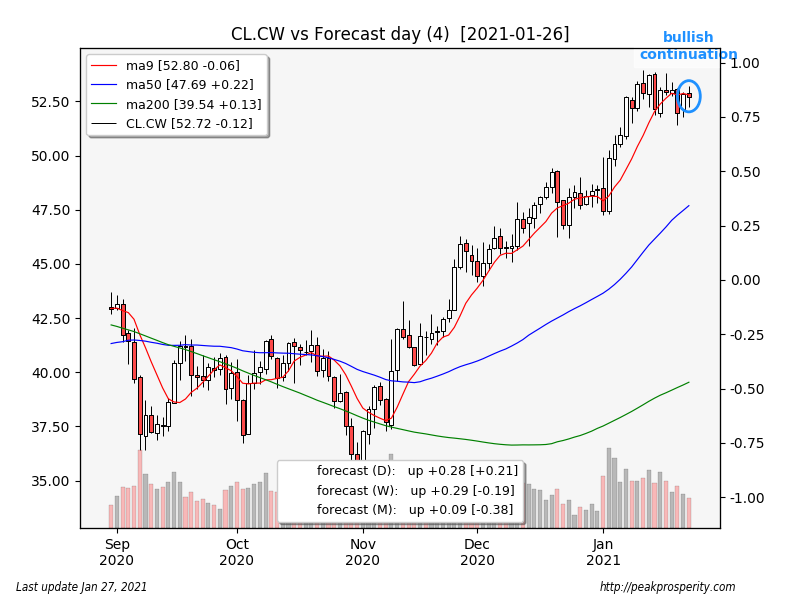 SPX dropped -5.74 [-0.15%] to 3849.62 on moderate volume. The closing black marubozu candle was a bullish continuation, forecaster dropped, but remains in an uptrend. SPX is in an uptrend in all three timeframes.

Not much happened in equities today – while it was another new all time high, the NYSE advance ratio looks ill; today’s rating was 41%, and more importantly, the MA5 is showing a steady decline – right now it around 47. These new highs are not broad-based events, and this is generally a bearish sign. 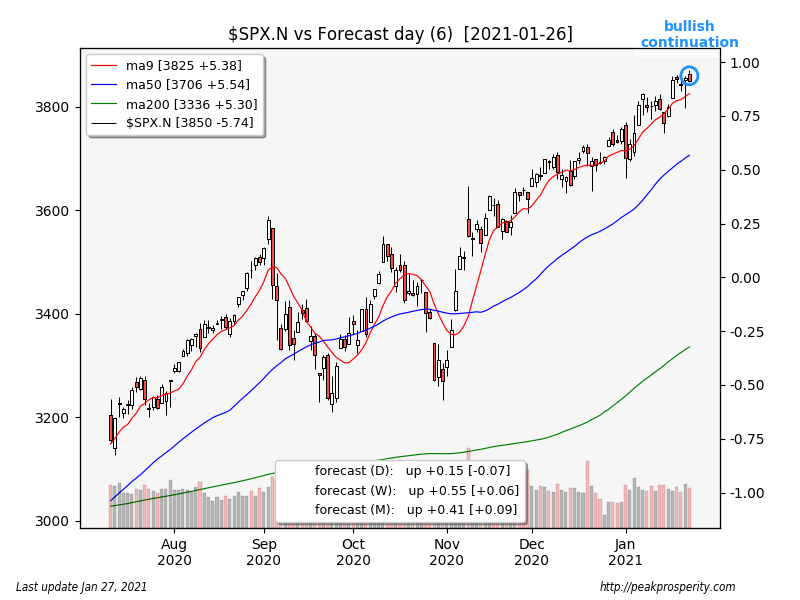 TLT inched down -0.19%. The short white candle was unrated, forecaster dropped, but remains in an uptrend. TLT is in an uptrend in the daily and weekly timeframes. The 30-Year yield fell -1.0 bp to +1.79%.

TY was unchanged -0.02%. The short black candle was a bullish continuation, forecaster dropped, but remains in an uptrend. TY is in an uptrend in the daily timeframe. The 10-Year yield fell -2.0 bp to +1.03%.

Not much change in bonds today either. 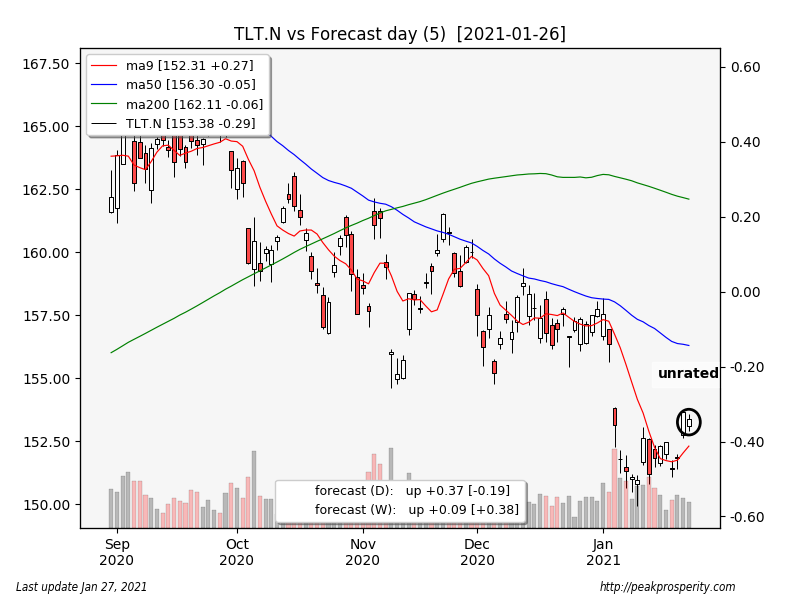 JNK inched down -0.06%. The spinning top candle was a reasonably strong bearish reversal (40%), forecaster dropped, moving deeper into its downtrend. JNK is in an uptrend in the weekly timeframe. 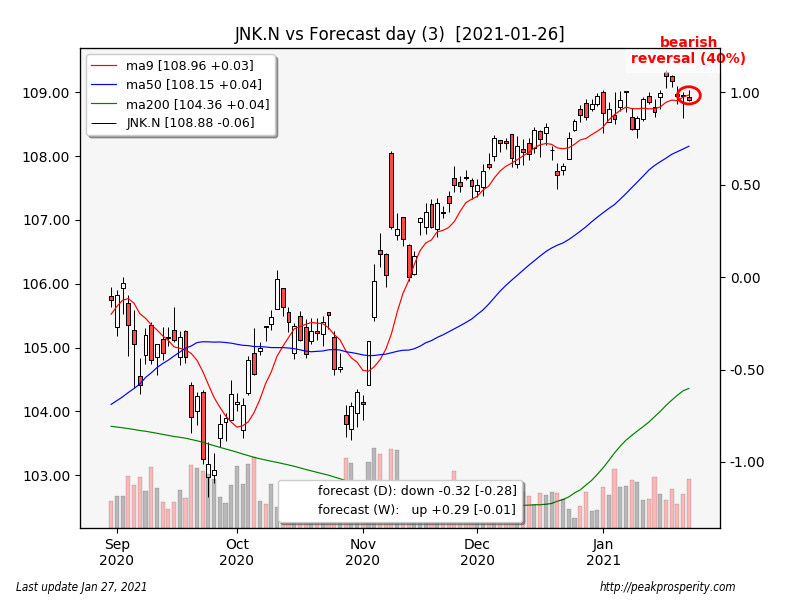 The GLD ETF tonnage on hand dropped -0.87 tons, with 1172 tons remaining in inventory.

Physical ETF discounts are starting to get quite wide; big bar gold remains at a reasonable premium, while big bar silver
premiums are low.

Gold and the miners moved lower, while silver rallied. None of the moves were particularly strong, however gold moving lower right along with a falling dollar is not a sign of strength.

Risk assets all inched lower today; the moves were minor.

Bonds went nowhere too, for the most part.

One bit of good news – for those who like divided government – a few Democratic senators (Joe Manchin WV, Kyrsten Sinema AZ) have decided they won’t go along with any attempt to eliminate the filibuster.

This single outcome prevents a whole wave of legislation from cascading through Congress. Assuming it sticks. Game-theory-wise, this makes sure that the moderate Democrats don’t have to actually vote against laws from the House that they really didn’t want to vote for anyway. They can blame those weasely 41 Republicans for it instead.

This eliminates the threat to pack the Supreme Court as well. And – presumably – no statehood for DC.

That new “domestic terrorism” law from Adam Schiff? This law would basically apply the same rules of the Patriot Act to US citizens at home; would this allow CIA-run drone attacks on US-citizen “terrorists”? Maybe! Who knows? That should theoretically be DOA as well. Do we imagine the Republicans will survive in office if they let that pass?

Likely, that Biden Donor Stimulus bill won’t pass also – unless it throws some money to the Country Club Republican Donors too. Which they could well do. But the calculus just got a lot more complicated.

It looks like the Biden Donors will be ruling mostly by executive order. The astonishingly broad corporate-authoritarian streak exposed by the recent “election” isn’t going away. It will probably get worse. But the worst case scenario does appear to have been avoided, at least for now.

One more thing. A procedural vote in the Senate showed 45 Republicans voting in favor of a Rand Paul measure to declare Impeachment II as unconstitutional. This “test vote” forced Republicans to pick sides; those who sided with Impeachment II included: Mitt Romney (UT), Ben Sasse (NE), Susan Collins (MA), Lisa Murkowski (AK) and Pat Toomey (PA). Long story short: Impeachement II is dead. [Most likely, that’s because the Bad Orange Man has remained largely silent after leaving the White House – as per the agreement I believe he struck with McConnell.]

Is it constitutional to impeach a President who has already left office? Most likely not. The Supremes would seem to agree; the Chief Justice has declined to preside over the upcoming “trial.” Once Impeachment II is over, the Biden Donors will have to actually govern. And the Media will have to find non-Trump things to report on – or else their viewers will vanish, and they will all die. Fox will do fine – Newsmax, OANN, Epoch Times – they will probably grow. What will the rest of them do?

I have a suggestion: maybe ask some questions about the “10 held by H for the big guy.” Who is this “big guy” anyway?

It is a very red morning with rik assets indicated lower 3/4 to 13/4%.  Covid numbers seem to be rapidly improving.  A correction may well be upon us.

Without Trump and Covid, and lower asset values, what can we possibly talk about?

Looks like – maybe – this is the “pandemic is over” market signal.

Still just the first hour though.  It could all evaporate.

The markets are getting killed by horse paste. Yea Haa!

Will bitcoin bounce off its previous low?

Based on how bitcoin is trading right now – I’m thinking maybe it doesn’t hold 30k today.  It seems to be a “money printing hedge” and I think divided government won’t end up printing money the way we thought it might.  Because, filibuster.

But the end of the pandemic (process starting now) should end up being inflationary.

“Print 10 trillion dollars, store in the basement, is it inflationary?”

No.  Inflation only happens when you spend it.

And all that parked money is going to come out of hiding once people can leave their homes.

My goodness I’m so happy that the Donors purchased the election for Biden.  He’s the one who told us “We have to reopen the country safely” 9 months ago.  And now its finally happening.

Or am I confusing him with someone else?

“Print 10 trillion dollars, store in the basement, is it inflationary?”

No. Inflation only happens when you spend it.

Recently Greg Hunter interviewed Paul Craig Roberts.  I like listening to PCR as much as JAG likes Greg Hunter.  The one take-a-way I got was this:

The biggest problem Dr. PCR sees is not the federal debt. Dr. PCR says, “The federal debt is not the problem, the real problem is the private debt. . . . The debt burden of the population has gone up over the last 25 years, and this is the difficult problem. Income now is completely utilized in debt service. This is what is meant by debt deflation. Since the consumer is utilizing their money in debt service, there is no money for discretionary spending. Therefore, there is nothing to support the rest of the economy. . . . Then, the lockdowns come, and they further restrict the income flow to the people who are already drowning in debt. . . . The debt needs to be written off, but that is hard to do. . . . So, when people talk about a collapse, this will be the cause of the collapse. We will have a debt deflation collapse and not hyperinflation.”

Establishment War Against “We the People” – Paul Craig Roberts

I took that as a challenge but only lasted 11 minutes into the podcast. Never mind what they are saying (DF, you would like it) but just PCR’s voice reminds me of the adult voices on the Charlie Brown TV specials when I was a kid.

Speaking of debt, we are finally starting to see margin debt outpace the stock market: 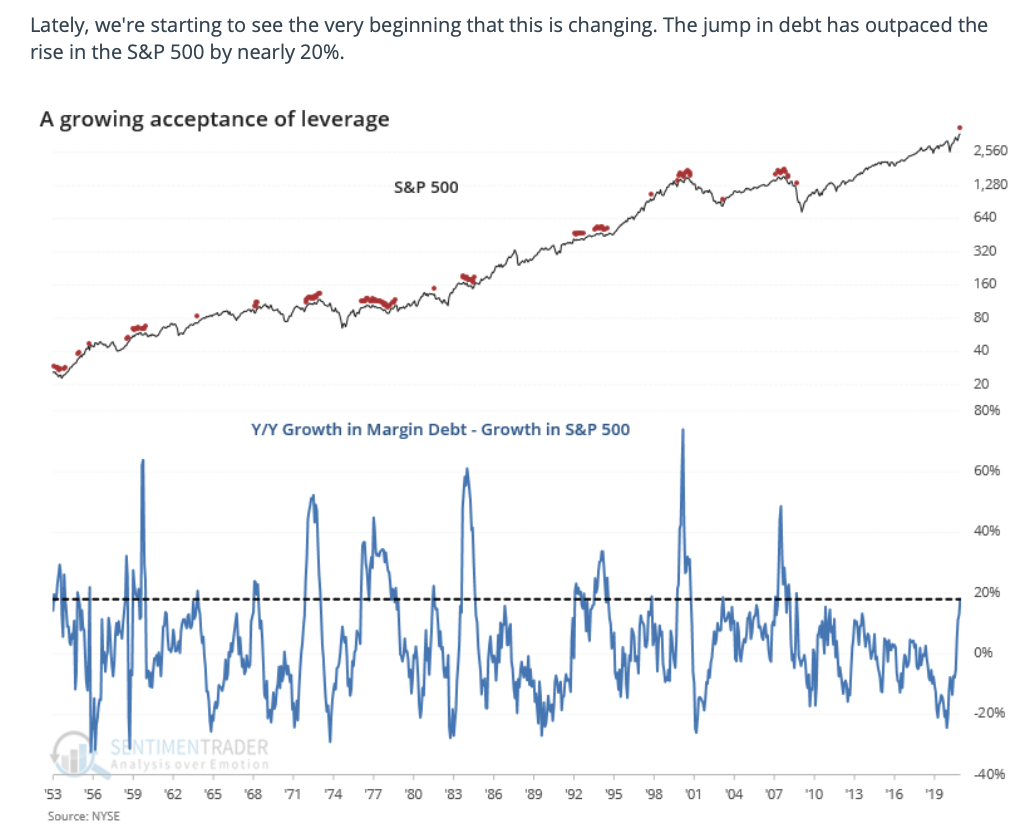 It looks like it has a way to go to reach an extreme, though.

Edit: What a vomit of the markets into the afternoon. I just checked my brokerage account and it is GREEEEEN! I love green vomit.

Here’s a graph they don’t want you to see

Showing the rise of antibodies (to COVID) in Swedish population over time.