Gold fell in Asia, then started to bounce back just before the US market opened. While gold didn’t close at the highs, it was a decent performance given the dollar rally. The spinning top candle was a possible bearish reversal (31%), forecaster climbed, moving higher into its uptrend. Gold remains in an uptrend in all three timeframes.

Futures are projecting a 13% chance of a rate increase at the Fed meeting on 29 January. 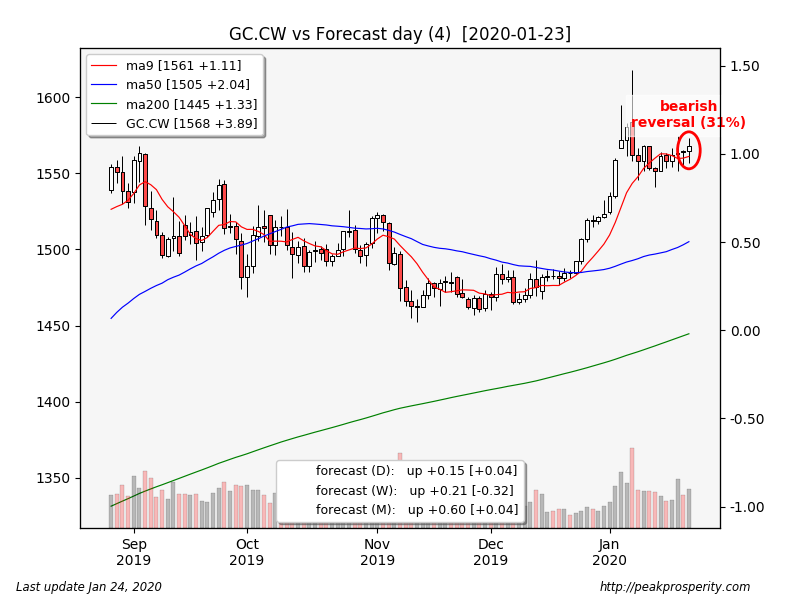 Silver more or less followed gold, but silver’s rebound wasn’t nearly as strong. The high wave candle was a bearish continuation, forecaster dropped, moving deeper into its downtrend. Silver remains in an uptrend in the monthly timeframe, and in a state of no-trend on the weekly. Gold remains much stronger than silver. 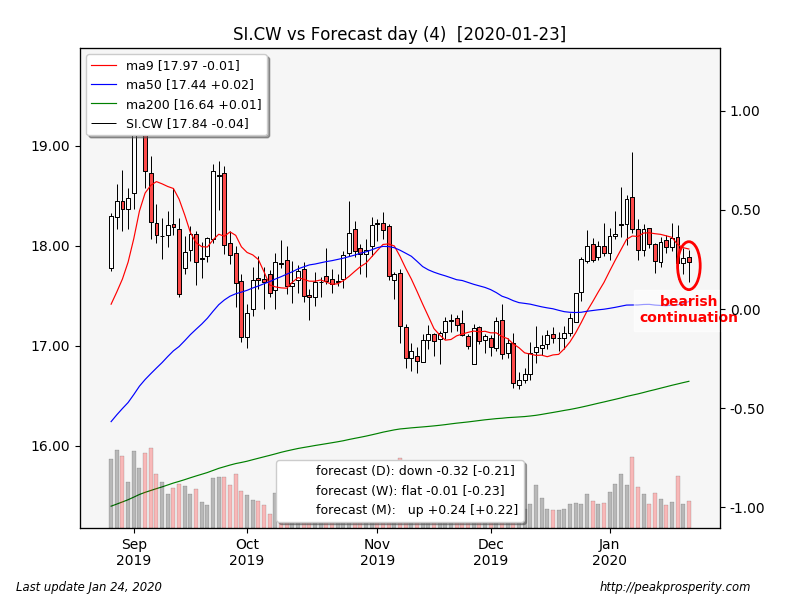 Miners opened lower, rallied strongly in the morning, only to sell off through the close. GDX fell -0.62% on moderate volume, and GDXJ dropped -1.37% on moderately light volume. XAU moved down -0.21%, the long white candle was a reasonably strong bearish reversal (47%), and forecaster fell, dropping into a state of no-trend. XAU remains in an uptrend in just the monthly timeframe, and that uptrend isn’t particularly strong. 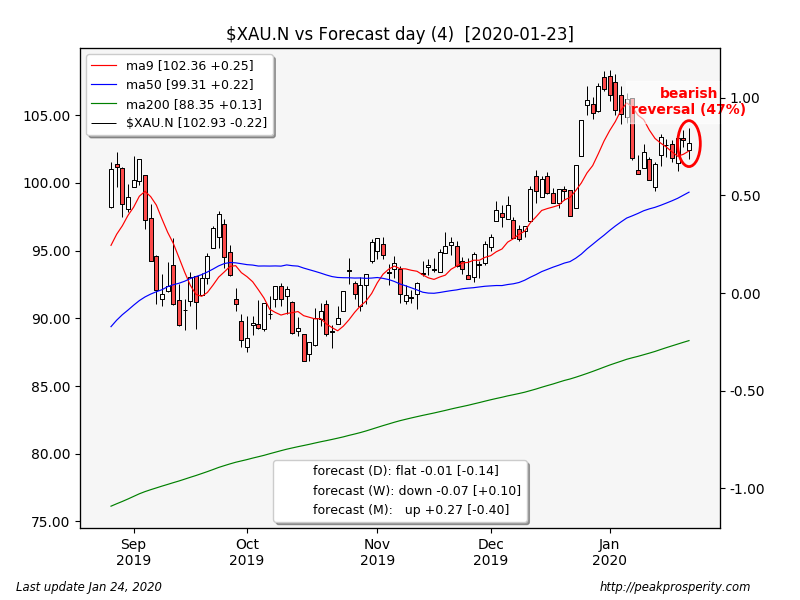 The buck climbed +0.18 [+0.19%] to 97.31 on very heavy volume. The long white candle was a bullish continuation, forecaster climbed, moving higher into its uptrend. The buck is in an uptrend in the daily and monthly timeframes. Today’s move took the buck above its 200 MA, which is a positive sign, as is the new monthly high. 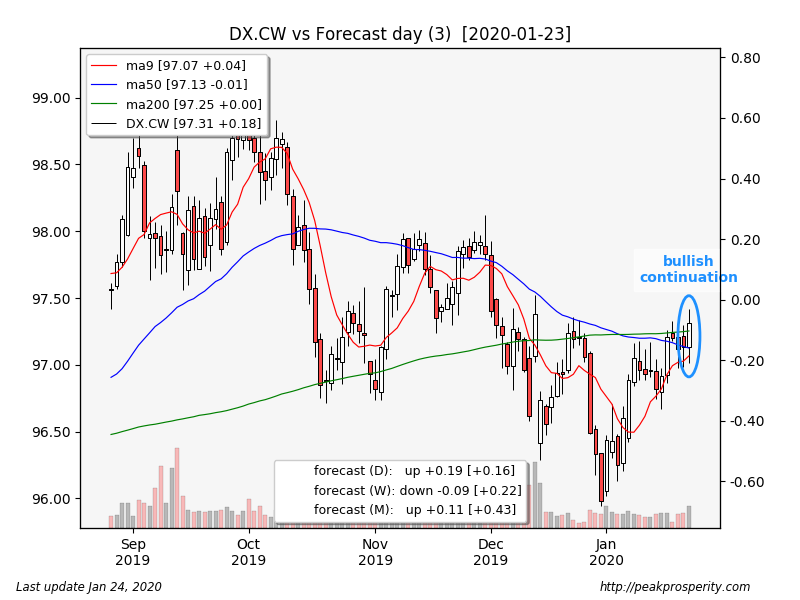 Crude fell -0.38 [-0.68%] to 55.70 on moderately heavy volume. The hammer candle was a bearish continuation, forecaster dropped, moving deeper into its downtrend. Crude remains in a downtrend in both the daily and weekly timeframes.

The EIA report was bullish: crude -0.4m, gasoline +1.7m, distillates -1.2m. The report release caused a rebound in crude, which had sold off almost $2 in the hours leading up to the report release. This rebound effectively formed the hammer candle, which I thought looked nice, but the candle code didn’t find to be particularly compelling. 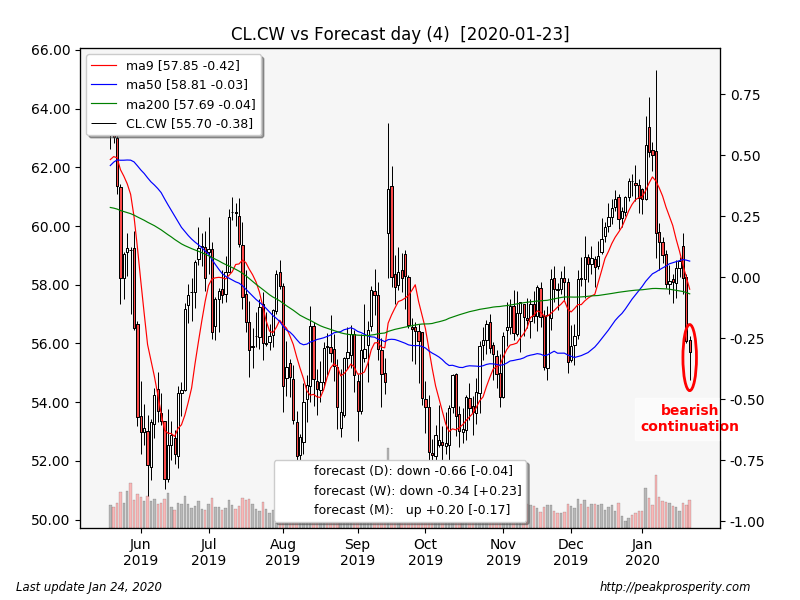 TLT climbed +0.70%. The short white candle was a bullish continuation, and forecaster climbed, moving higher into its uptrend. TLT is in an uptrend in the daily and weekly timeframes. The 30-Year yield fell -4.0 bp to +2.18%.

Money continues to move into bonds.

JNK fell -0.32%. The opening black marubozu candle was a bearish continuation, forecaster dropped, moving deeper into its strong downtrend. JNK is in a downtrend in both the daily and weekly timeframes. JNK is yelling “risk off” right now; the equity market doesn’t seem to be listening. Not at the moment anyway. 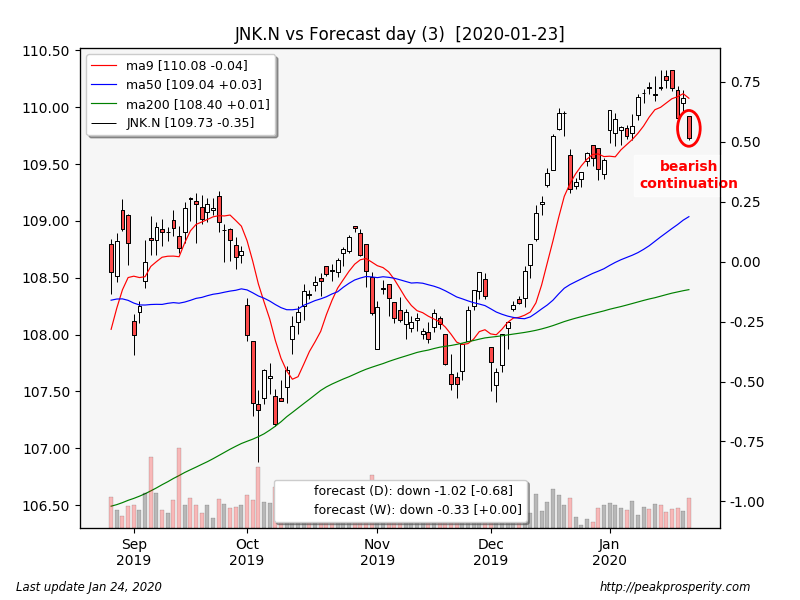 While Fed Money Printing has faded from the picture (today’s update shows that the balance sheet dropped by a big $30 billion this past week), the Wuhan virus has stepped up to take its place.

We are getting conflicting signals from the market as to just how serious this situation is.

The buck and gold are both moving slowly higher. Bonds seem to have a bid too, while crappy debt is selling off briskly, as is copper – which is usually a proxy for China’s economic prognosis. And yet equities – US equities – currently remain immune to the effects of the nascent flight to safety.

Which signals do we believe?

China started out this week by locking down Wuhan. A few days later, another 7 cities are on the lockdown list. I’d err on the side of caution. I think we will have many more weeks of uncertainty before we have a sense as to what the facts really are.

I’m going to believe crappy debt. It is time for caution.

The Fed can’t fix a pandemic threat.  China has shut down 10 cities.  My guess: the CCP is terrified of losing “The Mandate of Heaven.”  Unlike Iran, and other geopolitical events, this one won’t end quickly.  A pandemic threat will stick around for weeks, maybe even months.  It will not be good for confidence, nor economic activity.

My read: traders do not want to be exposed to risk before the weekend. The two attempts by SPX to rally were sold.  Who knows what the CCP will say over the weekend?  Really, anything could happen.

Medium-term risks: anyone exposed to China’s debt will want to flee.  CNY/USD will tank further.  Money will flee China.  HKG-USD (weakened by HK protests) could break, causing a banking crisis.

Of course, I’m now short, so – I’m talking my position.

That move in JNK has my attention.  Nothing can really get cracking here until and unless the crud sells off too.

I do think this coronavirus is the exact sort of a black swan event these bloated markets are poorly designed to handle.

JNK was falling two days before SPX started to drop.  This was the setup that told me to jump in.

A weekend is a long time.  Who knows where SPX will be at the open in Asia?  I mean, maybe it will all be fine.  But I don’t think so.

Paper (not yet reviewed) estimates there are actually 12,000 cases right now, and projects there will be 190k cases in 14 days time.

That’s enough to make you, the leader of the CCP, willing to shut down 13 cities.  Who wants to lose the Mandate of Heaven this early in your lifetime appointment?