Gold moved lower in Asia, but bounced back within a few hours, chopping sideways into the close. The doji/NR7 candle was unrated, and forecaster climbed, moving higher into its uptrend. Gold remains in an uptrend in all three timeframes.

Futures markets are projecting a 13% chance of a single rate increase at the Jan 29th FOMC meeting. 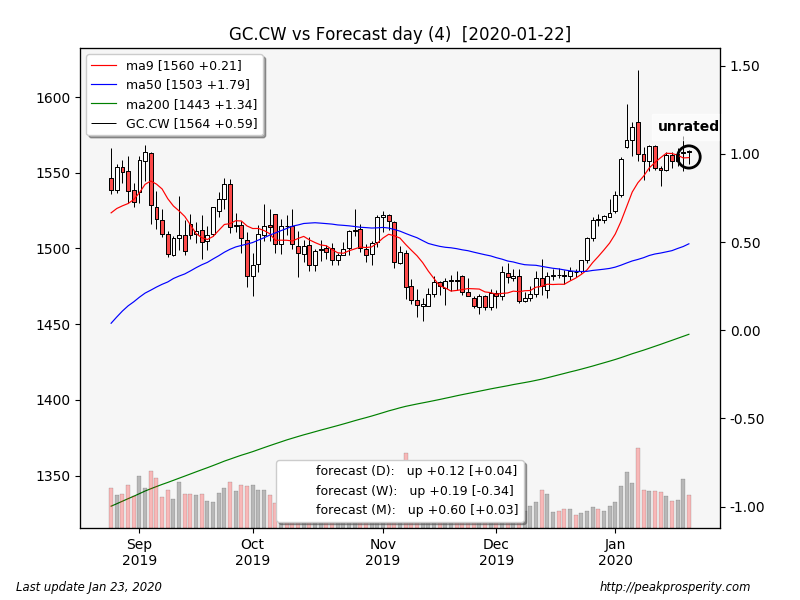 Silver dipped briefly in Asia, then recovered, bouncing back into positive territory. Silver moved up +0.05 [+0.28%] to 17.88 on moderately light volume. The bullish harami candle was a bearish continuation, and forecaster climbed, but it remains in a downtrend. Silver remains in a downtrend in both the daily and weekly timeframes. 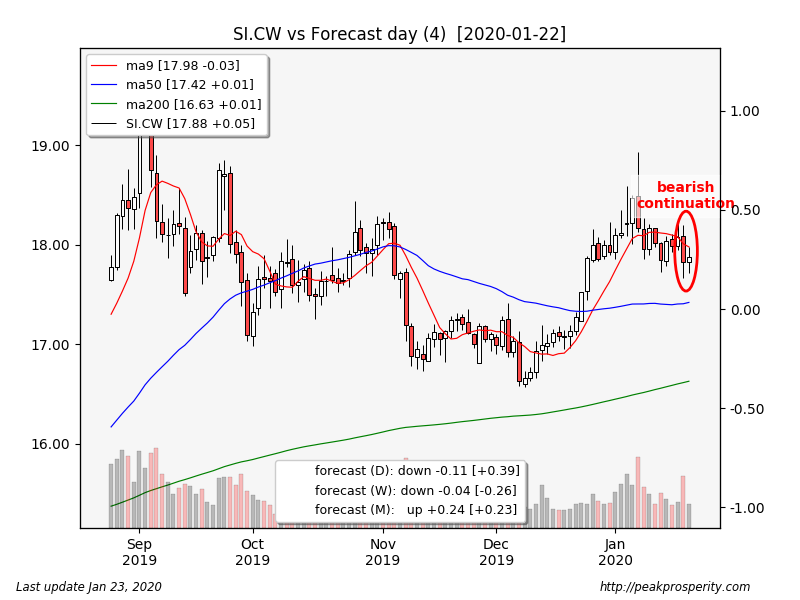 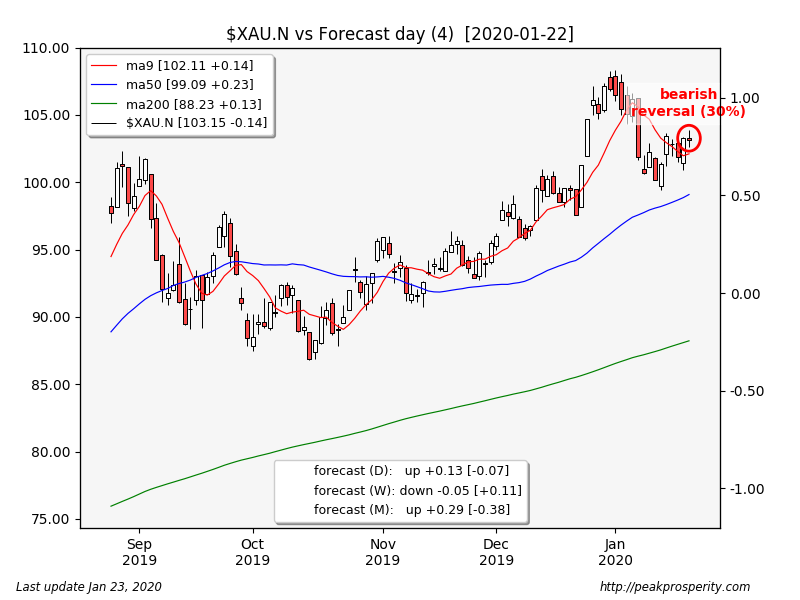 The buck inched up +0.01 [+0.01%] to 97.13 on moderately heavy volume. The long black candle was a bullish continuation, forecaster dropped, but remains in an uptrend. The buck is in an uptrend in the daily and monthly timeframes.

Crude plunged -2.14 [-3.68%] to 56.08 on moderate volume. The long black candle was a bearish continuation, and forecaster dropped hard, moving deeper into its downtrend. Crude is in a downtrend in both the daily and weekly timeframes. Today’s plunge took crude down to a new 2-month low. Oil tea-leaf-readers opined this move was mostly about an economic slowdown due to the potential economic impacts from the Wuhan virus. 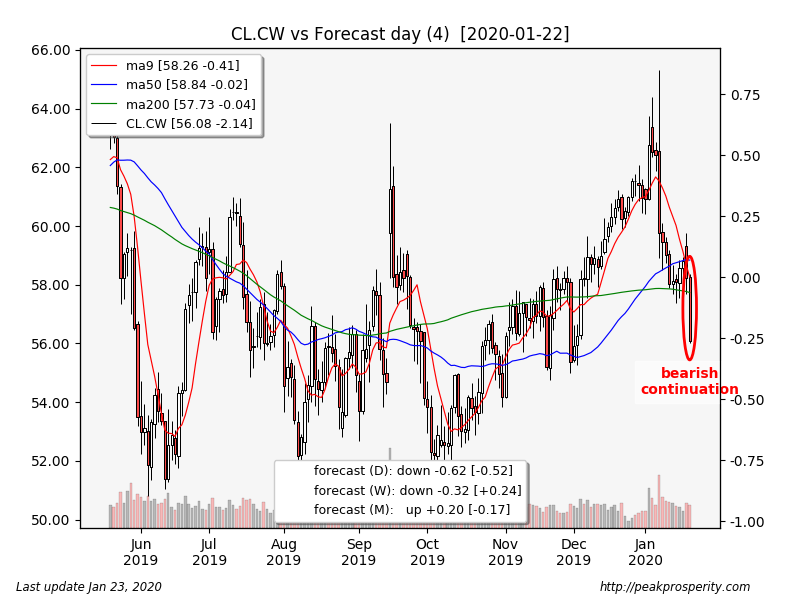 TLT moved up +0.35%. The short white/NR7 candle was a bullish continuation, and forecaster climbed, moving higher into its uptrend. TLT remains in an uptrend in the daily and weekly timeframes. The 30-Year yield fell -1.0 bp to +2.22%.

TY inched down -0.01%. The doji/NR7 candle was a bullish continuation, and forecaster climbed, moving higher into its uptrend. TY is in an uptrend in the daily and weekly timeframes. The 10-Year yield fell -1.0 bp to +1.77%.

JNK climbed +0.15%. The bullish harami candle was a bearish continuation, and forecaster climbed, but remains in a downtrend. JNK is in a downtrend in both the daily and weekly timeframes.

Crude took a big spill today, plunging far below its previous low. In spite of an almost-complete stoppage of oil production in Libya (due to the country having been destroyed by the previous administration for no reason I could see), and unrest in Iraq, the hit today was partially about a bearish API report, but also – possibly – about concern over the Wuhan coronavirus, and its potential effects on the global economy.

If the economy slows down due to the virus (and the attempts to prevent its spread), some of that crappy debt will go bad. Unless the Fed buys it all up – which I suspect is unlikely – we could see some serious fireworks.

And yet puts remains cheap, and SPX made a new all time high.

There was a hint of good news, however:

Dr David Heymann, who headed WHO’s global response to SARS in 2003, said the new virus appears dangerous for older people with other health conditions, but does not seem to be as infectious as SARS.

“It looks like it doesn’t transmit through the air very easily and probably transmits through close contact,” he said. “That was not the case with SARS.”

Last year, China was hit with tariffs, cracked down on Hong Kong (which then focused the world’s attention on Xinjiang, organ harvesting, and generally moved the US towards a decoupling), with all of that leading to Taiwan’s election where Beijing’s candidate was roundly rejected, and now this new outbreak. For the CCP, if its not one thing, its another.

Regarding the virus, will just have to see how this plays out. If Dr. Heymann is correct and transmission isn’t as easy as SARS (i.e. close contact with a patient is required for transmission) then we may avoid a pandemic-driven global recession. Right now, we just don’t know enough about that transmission rate.

Here’s what the experimental reversal model has to say about crude.  Note: this only works (of course) if the whole pandemic thing isn’t as bad as we fear right now.

The “5” means it has a 5-day lookahead; algorithm is, buy on the blue bubble, hold for 5 days OR until you see a swing high, OR price closes below the lower end of your buy point (i.e. you get stopped out) OR you run into a red bubble.  Another blue bubble (above 80) extends the period for another 5 days, and/or invalidates a stop. 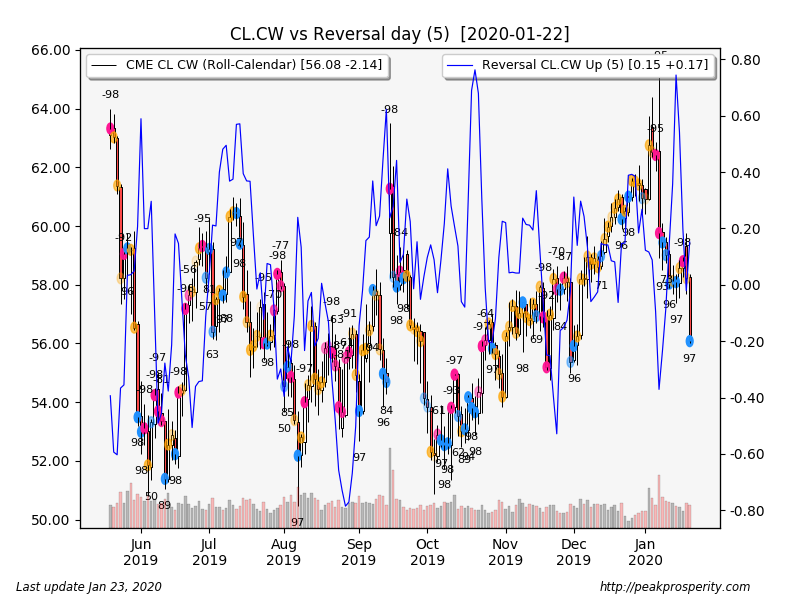 The then-head of Interpol, Meng Hongwei, was ordered back to China on…some pretext…back in 2018.  He vanished into the bowels of China for two years, only to reappear for his sentencing for corruption two days ago.

Meng Hongwei, who was the first Chinese head of Interpol, vanished on a trip back to the country from France in September 2018.

China later confirmed he had been detained as part of President Xi Jinping’s drive against corruption.

The court statement said Meng would not appeal against the verdict.

My interest in this case started because of an interview that Kyle Bass did with the renegade Chinese billionaire Guo Wengui, where they discuss Meng Hongwei’s case at length (link to interview below).  Wengui claims that Hongwei’s real mission was to capture him (Wengui) and return him to China.  He failed in this, and that failure is ultimately why Hongwei was recalled and then jailed for “corruption.”  Allegedly.

Knowing what I know now, it seems absurd on its face to have the head of Interpol be a member of the CCP – the same group that is in charge of the concentration camps of Xinjiang, and all the (related) organ harvesting.  But that’s another issue.

My guess: there has to be some massive, face-losing event that happened that the CCP is totally covering up with all of this mystery.  Who wants your first head of Interpol yanked back to the home country – “for corruption.”  Does that make China look good?  Not so much.  But he knows where all the bodies are buried.  He cannot possibly be allowed to talk.  Or defect.