Gold first tried to rally in Asia but that rally failed; it then tanked hard, bottoming out at 9:30 am, and then bounced back almost immediately, recovering back to even again. The long legged doji candle was a possible bearish reversal (35%), and forecaster dropped, but remains in a mild uptrend. Gold remains in an uptrend in all three timeframes.

The futures markets are predicting a 16% chance of a rate increase at the Jan 29th Fed meeting. 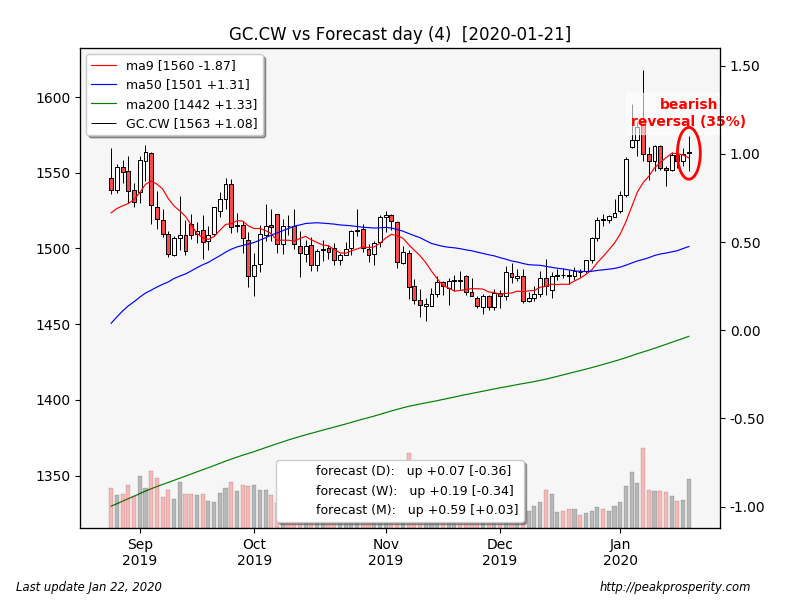 Silver sold off hard starting around 8 am, bottoming out at 9:30 am just in time for the US open. Silver did rebound somewhat after market open, but not enough to erase its losses. The confirmed bearish spinning top candle was a probable bearish reversal (57%), and forecaster dropped into a downtrend. Silver is in an uptrend in the monthly timeframe, with the weekly in a state of no-trend. 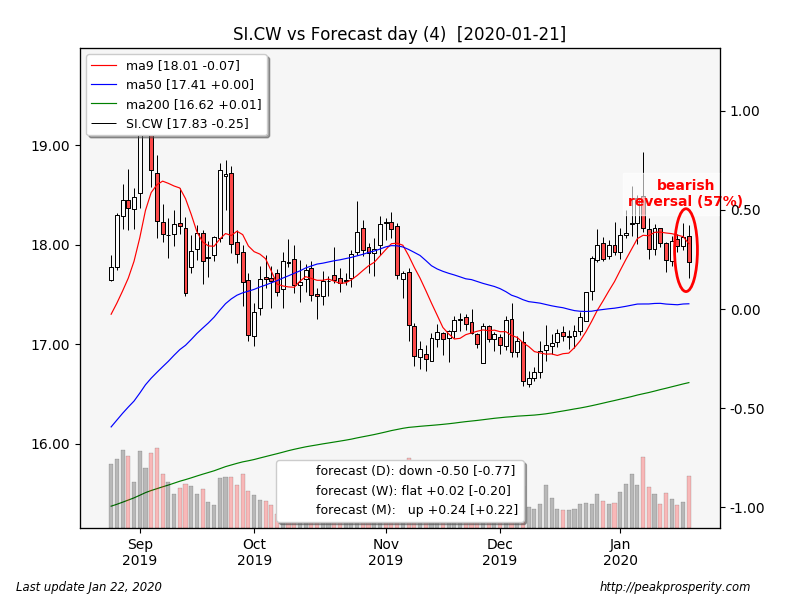 Miners gapped down at the open, then rallied sharply for the first 90 minutes, eventually closing at the highs for the day. GDX moved up +1.86% on moderate volume, and GDXJ rallied +1.69% on moderate volume. XAU climbed [+1.42%], the long white candle was a possible bullish reversal (34%), forecaster climbed, moving higher into its uptrend. XAU is in an uptrend in the daily and monthly timeframes. It was a great performance for the mining shares, on a day when silver was mostly beaten like a rented mule. 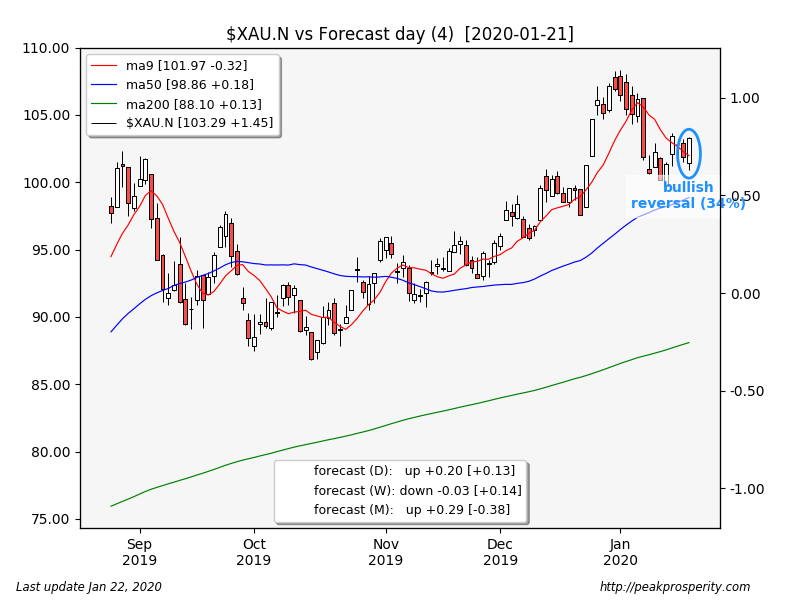 Platinum fell -23.20 [-2.31%], palladium was virtually unchanged -0.10 [-0.00%], while copper plunged -0.06 [-2.13%]. The huge drop in copper is a warning sign; is it about the Wuhan virus and its possible effects on China’s economy? Or maybe it was just sell-the-news from the US-China trade deal signed last week? It’s hard to say, but its not a positive sign for risk assets. Copper is now in a downtrend in all 3 timeframes.

The buck inched down -0.08 [-0.08%] to 97.12 on moderate volume. The long black candle was a probable bearish reversal (52%), but forecaster climbed, moving higher into its uptrend. The buck remains in an uptrend in the daily and monthly timeframes, although the trends remain fairly weak.

Crude fell -0.58 [-0.99%] to 58.22 on moderately heavy volume. The long black candle was a reasonably strong bearish reversal (43%), forecaster dropped, moving into a downtrend. Crude is now in a downtrend in both the daily and weekly timeframes. 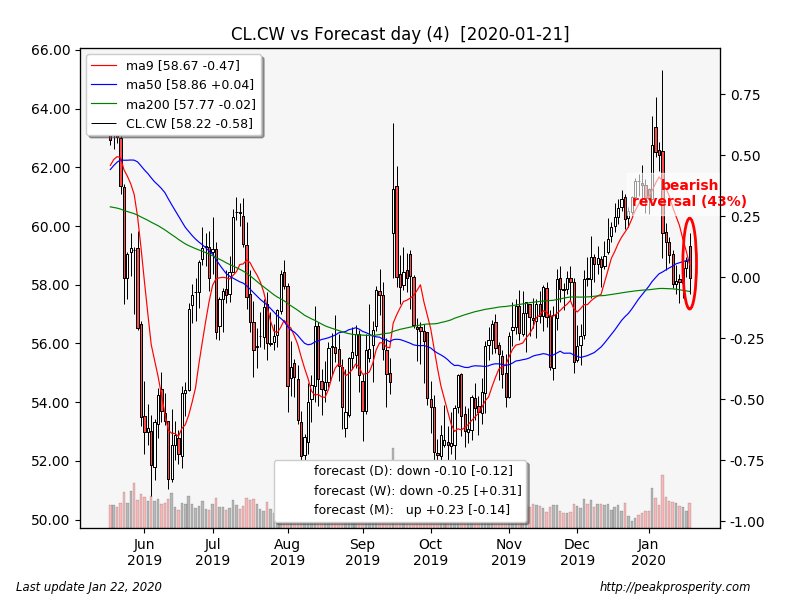 SPX fell -8.83 [-0.27%] to 3320.79 on moderately heavy volume. The doji candle was a bullish continuation, and forecaster dropped, but remains in an uptrend. SPX remains in a strong uptrend in all three timeframes. This was not a bearish reversal for SPX.

TLT jumped +1.05%. The swing low candle was a probable bullish reversal (50%), forecaster climbed, rising into an uptrend. TLT is now in an uptrend in both the daily and weekly timeframes, although the weekly uptrend is a bit feeble. The 30-Year yield fell -6.0 bp to +2.23%.

TY climbed also, rising +0.32%. The opening white marubozu was a bullish continuation, and forecaster climbed, moving into an uptrend. TY is now in an uptrend in the daily and weekly timeframes, and the monthly is right on the edge of a reversal. The 10-Year yield fell -6.0 bp to +1.77%. This was a breakout to a new 8-week closing high for TY.

Bonds did very well today. That’s not positive for risk assets either.

JNK fell hard, losing -0.24%. The strong line (also 3-candle swing high) was a possible bearish reversal (37%), and forecaster dropped, moving deeper into its downtrend. JNK is in a downtrend in both the daily and weekly timeframes. JNK is signaling risk off. 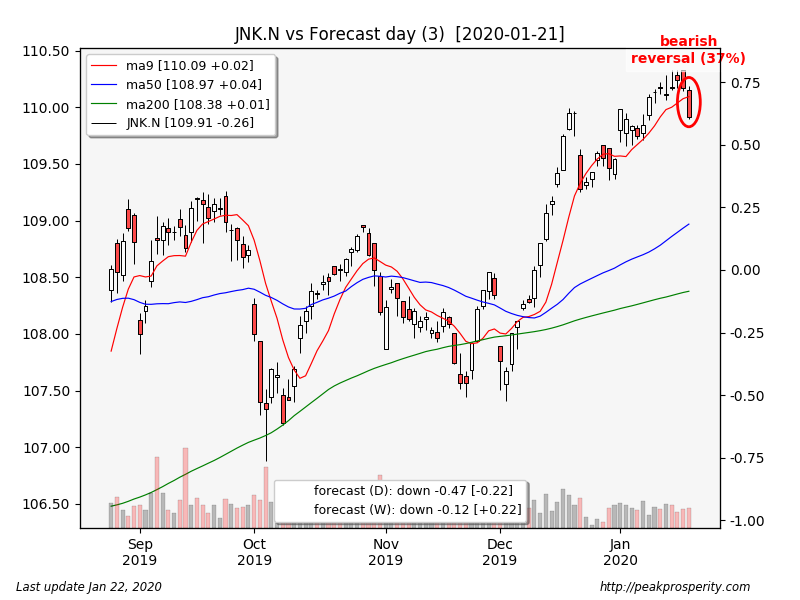 So the market-puzzle of the day for me: what caused the sell-off in silver? Certainly both platinum and palladium started dropping around 8 am, but silver’s plunge was substantially stronger, breaking below a previous low, and bottoming out exactly 2 minutes after market open. Ultimately, I’m tempted to write it up as a game played by the big boys – maybe they wanted to pick up some mining shares on the cheap.

Speaking of which, the miners did quite well today, especially given the brisk selling in both silver and gold in the hour before market open. The miners did gap down at the open, but they did not fall further in the first few minutes of trading, and then shot higher as silver and gold rebounded. If we assume the miners are leading PM, that’s a positive sign for where things go next. When the miners rally hard on a silver sell-off…that’s unusual, and good news.

We have a new grey swan, as I posted yesterday evening: the Wuhan Coronavirus, as I’m calling it. It appears to be spreading rapidly (now in half a dozen countries), and this is starting right at the beginning of “Chinese New Year”. The politically correct term is “Lunar New Year” – but if your city has a Chinatown, you will notice a whole lot of parades and celebrations going on at this time. My ABC friends call it “Chinese New Year” and as a result, so do I.

Basically China goes on vacation during this time, and those who can afford it, travel to other places. This holiday comes at the perfect time to assist in spreading the Wuhan Coronavirus all over the globe.

Currently they are not certain what the transmission rate is; one patient appears to have infected 14 medical stafff at one hospital. Hopefully that’s an outlier. The CFR seems to be steady at around 2%; as of this writing, 440 have been confirmed to have it, and 9 people have died. The majority of people who died have been elderly and had pre-existing conditions.

It is thought that the number of people who actually have the virus is far in excess of 440, based on the speed at which it has spread.

This is a grey swan because if it really does spread, and if it is very contagious, it will absolutely hammer the economy – not to mention killing a large number of people who are vulnerable. Even for those who catch it and recover, nobody spends money when they have pneumonia. Unless they check into a hospital, in which case they either have insurance or else they are billed outrageous amounts of money after which they go bankrupt.

This swan is a risk that even Fed Money Printing cannot avert.

SPX has yet to respond; crappy debt is starting to sell off, as is copper, while the 10-year is rallying. If this does turn out to be a “thing”, engaging in a bit of risk management at this point might be a prudent act, what with the equity market here at all time highs.

Not financial advice or anything – but puts remains cheap…just saying…

This update moves the case fatality rate to 3%, roughly similar to the 1918 influenza pandemic.  CFR for SARS was 11%.

BEIJING/SHANGHAI (Reuters) – Deaths from China’s new virus rose to 17 on Wednesday with more than 540 cases confirmed, increasing fears of contagion from an infection suspected to originate from illegally-traded wildlife.

An article explaining what’s going on in the palladium market (and likely the rhodium market).

Pulled the trigger and locked in the price for selling my Pd and Rh to Kitco and was very satisfied with the price.  Looking at price action alone, both of those markets have gone exponential and appear on the brink of collapsing.  We’ll see how the whole transaction pans out with Kitco.  They seemed very professional and efficient but you never know until you have the check in hand.

as far as Pd is concerned you also would have a choice of Provident Metals.  Not Rh though. 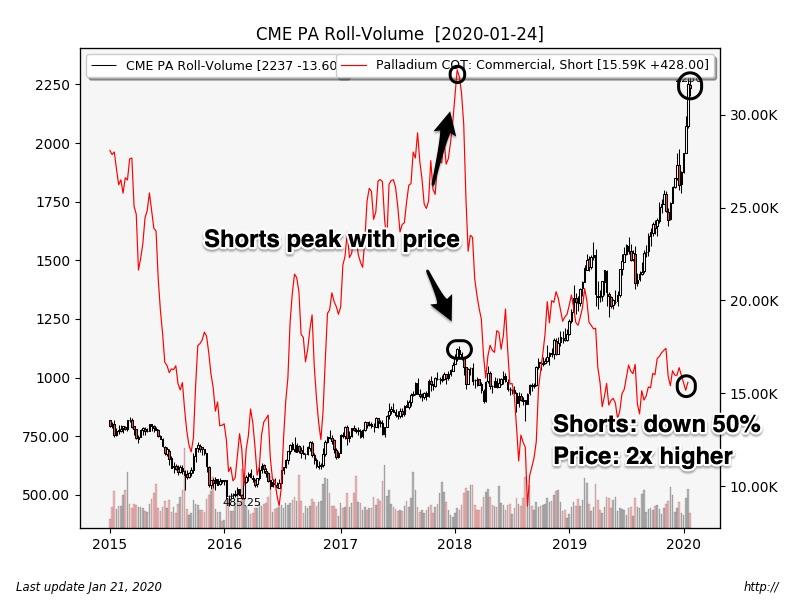 Selling is always hard, but an 8x is a pretty rare event.  Wherever the price goes next, this trade is certainly worth celebrating.  Just my two cents.

I’m in agreement with Hemke on his assessment of lease rates – not like I know the business, but what he says makes sense in terms of a supply crunch of some sort.  This suggests to me that I should look more at backwardation across the contracts for information.  I have all the price data, I just haven’t used it before.

Likewise, the last peak in open interest was back in 2018. That was the last “normal” wash-and-rinse cycle for palladium.  After that, the commercials backed way off, and they are not shorting palladium as prices goes parabolic.  This, too, suggests something is up.