Gold rallied in Asia and early in London, was pounded lower at 7:45 am, bottomed out at 8:30, and then rallied for most of the rest of the day, ending the day at the highs. The swing low2 candle was a likely bullish reversal (60%), forecaster climbed, moving higher into its uptrend. Gold is in an uptrend in all three timeframes.

Today saw a solid confirmation of yesterday’s rally; the candle print was very strong, and forecaster was happy too – all the tea leaves point to higher prices for gold. Gold blew through all 3 moving averages in one day, and gold/Euros managed to close back above both the 9 and 50 MA lines. 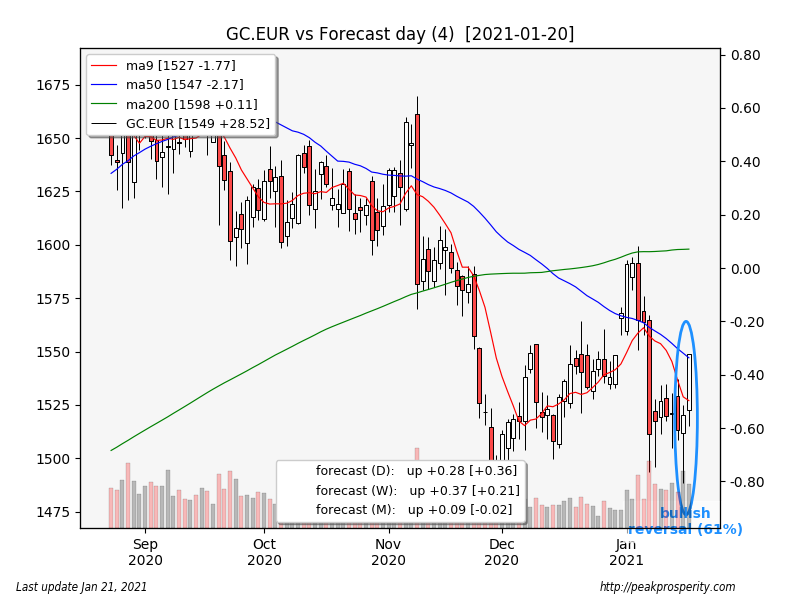 Silver saw the same intraday pattern as gold: first a rally, then a plunge at 7:45, and then a rally through end of day. The confirmed bullish spinning top candle was a probable bullish reversal (55%), forecaster climbed, moving higher into its uptrend. Silver is in an uptrend in the daily and monthly timeframes.

By the numbers, silver rallied more strongly than gold, but the chart didn’t look quite as good, and both the candle print and forecaster looked a bit less enthusiastic. Still, it was a good-sized move, and silver ended the day back above the 9 MA, which is a positive sign. 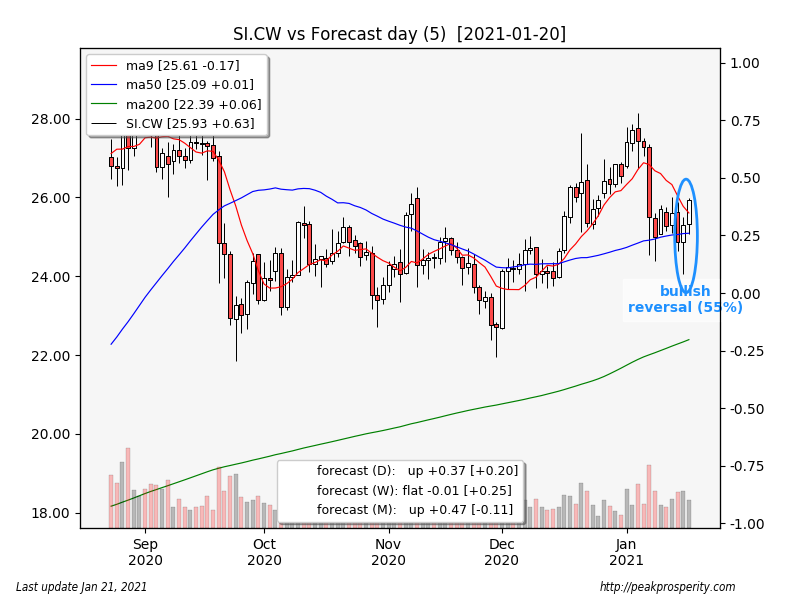 The miners gapped up at the open, then rallied for most of the day, ending near the highs. GDX shot up +3.36% on moderately heavy volume, and GDXJ jumped up +4.06% on moderately heavy volume. XAU climbed +3.05%, the confirmed bullish NR7 candle was a possible reversal (46%), and forecaster climbed, rising into an uptrend. XAU is in a downtrend in both the weekly and monthly timeframes.

While this was a reasonably good day for the miners, the candle print was reasonably strong, and daily forecaster is now back in an uptrend, the miner chart looks to be the weakest of the 3 PM items. The miners struggled to get back above the 50 MA, and remains below the 9 – although not by all that much. 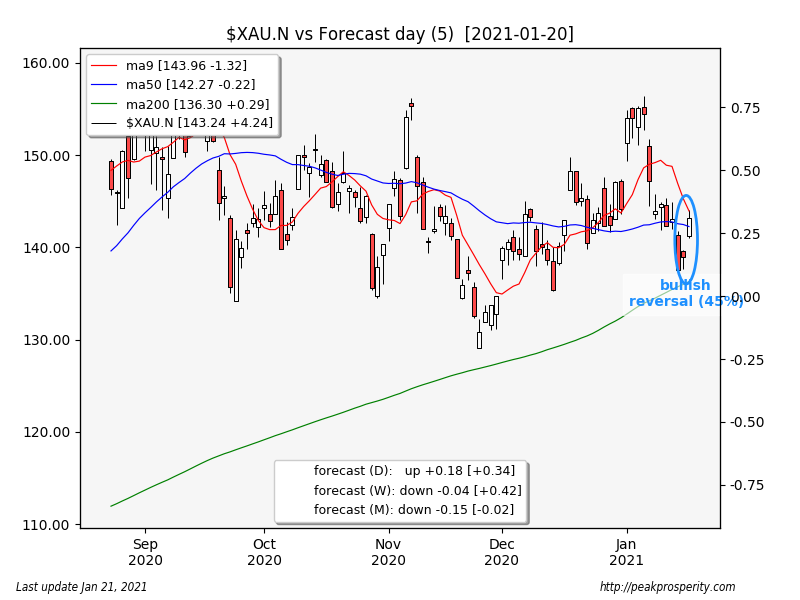 Copper climbed +0.01 [+0.28%] to 3.64 on moderate volume. The short white candle was unrated, forecaster fell, dropping into a state of no-trend. Copper remains in an uptrend in the weekly and monthly timeframes.

Copper’s rally today was fairly lackluster given all of the other moves. It remains in a longer term uptrend. 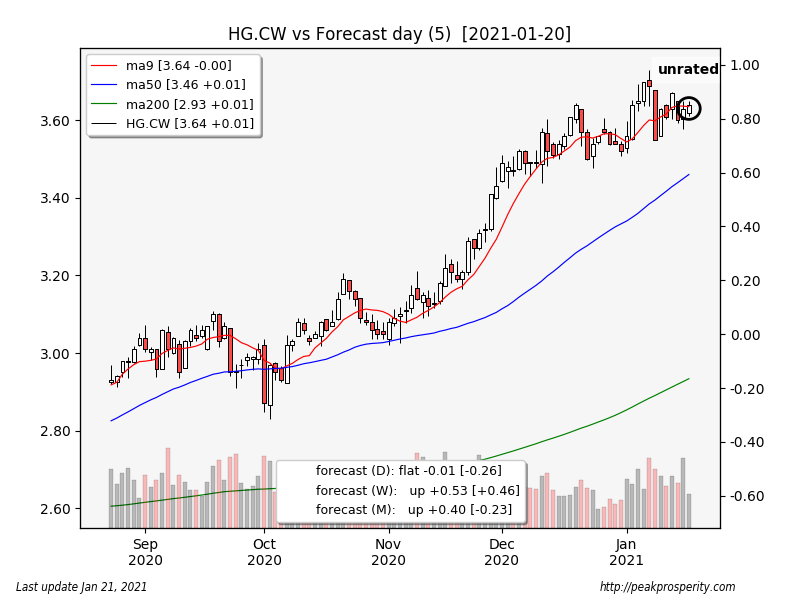 The buck was largely unchanged, down -0.01 [-0.01%] to 90.45 on moderate volume. The spinning top candle was a reasonably strong bullish reversal (44%), but forecaster fell, dropping into a downtrend. The buck is in a downtrend in all three timeframes.

It appears as though the buck found support at the 9 MA. Forecaster doesn’t look so happy, however – it sees the buck in a downtrend now in all 3 timeframes, although not a very strong one. 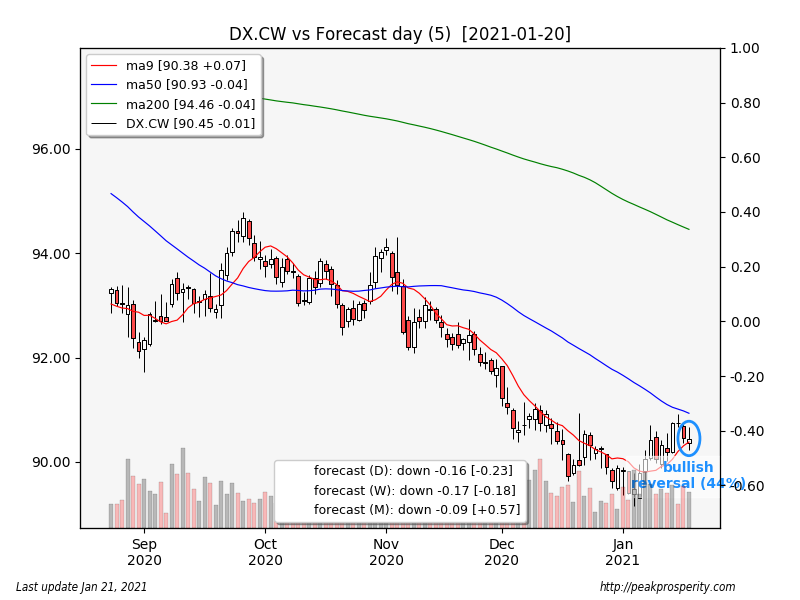 Crude edged down -0.07 [-0.13%] to 52.94 on moderately heavy volume. The doji candle was a bullish continuation, forecaster dropped, moving deeper into its downtrend. Crude is in an uptrend in the weekly and monthly timeframes.

There was no EIA report due to the holiday on Monday.

Today was a big failed rally – crude was up almost a buck at 9 am, but gave it all back by the close. The candle print looked bearish to me, but the tea leaves don’t agree. Crude remains above all 3 moving averages. 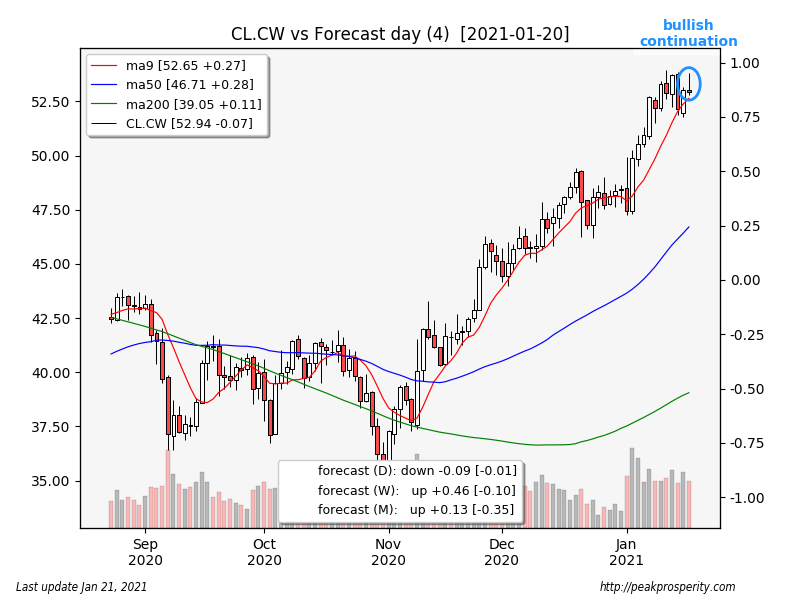 SPX rallied +52.94 [+1.39%] to 3851.85 on moderate volume. The opening white marubozu candle was a bullish continuation, and forecaster climbed, rising into an uptrend. SPX is in an uptrend in all three timeframes.

SPX broke out to a new all time high today. This pulled forecaster back into an uptrend. 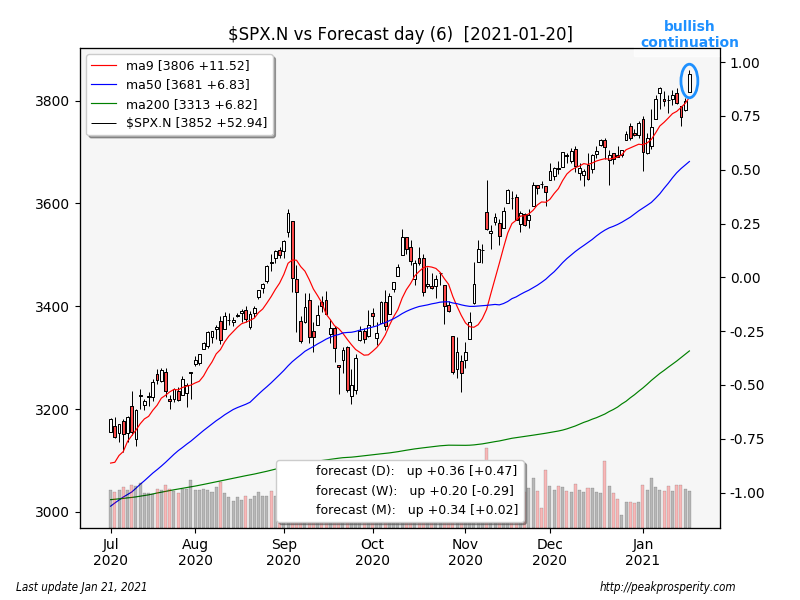 TLT climbed +0.10%. The closing white marubozu candle was a bullish continuation, forecaster was unchanged at. TLT is in an uptrend in the daily timeframe. The 30-Year yield fell -1.0 bp to +1.83%.

TY climbed +0.06%. The confirmed bullish nr7 candle was a reasonably strong bullish reversal (44%), forecaster climbed, moving higher into its uptrend. TY is in a downtrend in both the weekly and monthly timeframes. The 10-Year yield fell -1.0 bp to +1.08%.

Bonds remain in a weak uptrend. 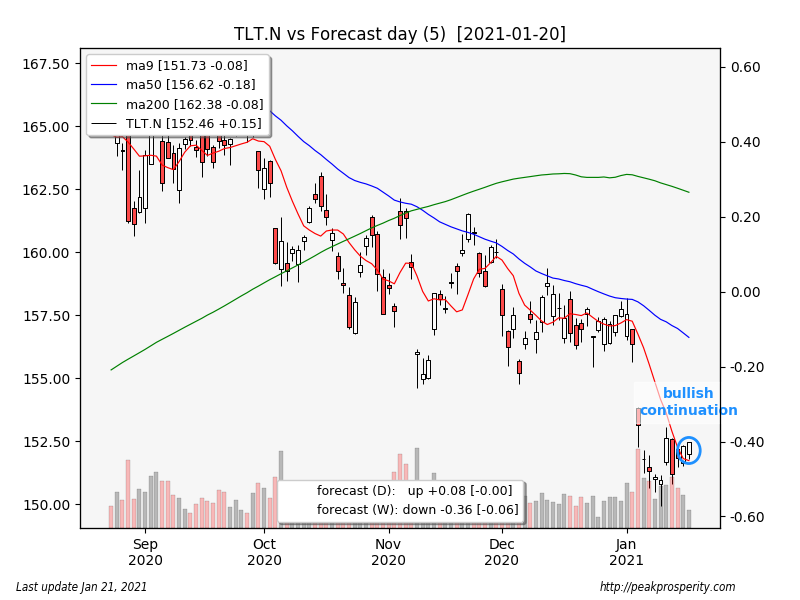 JNK climbed +0.25%. The long black candle was a bullish continuation, forecaster dropped, but remains in an uptrend. JNK is in an uptrend in the daily and weekly timeframes.

Crappy debt broke out to a new 11-month high, supporting the risk-on breakout of SPX. 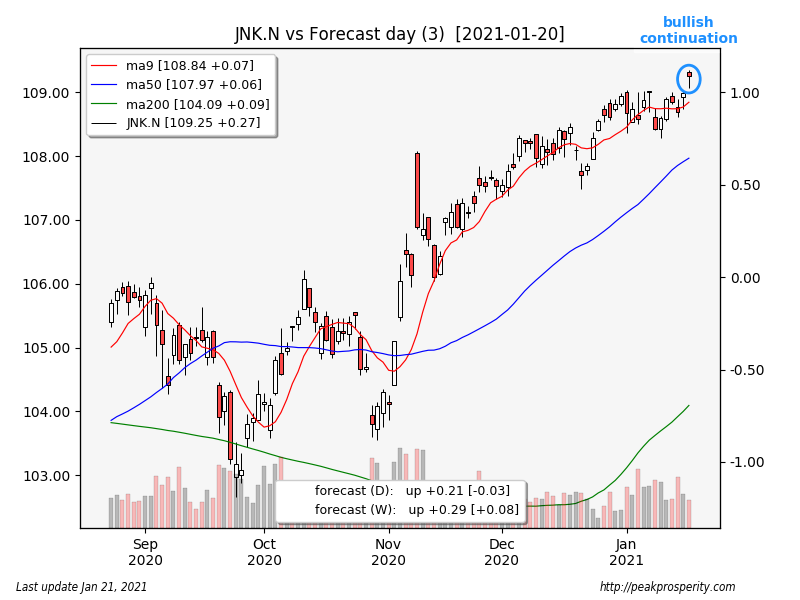 The GLD ETF tonnage on hand was unchanged at +0.00 tons, with 1174 tons remaining in inventory.

Gold, silver, and the miners all moved higher, with gold’s move looking strongest – at least on the chart anyway. Both gold and silver ended the day back above all 3 moving averages, and in uptrends. These were all bullish signs. Candle prints were also solid. Miners looked weakest – since they tend to lead, that’s not a great sign. I’ll be more sanguine a
bout this move in PM once the miners start to rally more convincingly.

Risk assets were mixed; SPX made a new all-time high, crappy debt made a new 11-month high, while both copper and crude visibly lagged. What does that mean? I’m not sure – but the divergence between the paper and the commodities was marked.

The buck is in a bit of no-mans-land right now. No clear signal today about direction.

Bonds are very slowly recovering. The uptrend is weak, and for now, just short term.

PM definitely seems to have reversed higher – the moves today were quite strong, as was the equity market rally. Everything else was pretty tepid.

In pandemic news, it appears as though positive tests may have rolled over, as have hospitalizations, with the peak coming about ten days ago. No doubt this has happened as a direct result of the 1918-style pandemic response provided to us by NIH: hide in the basement! 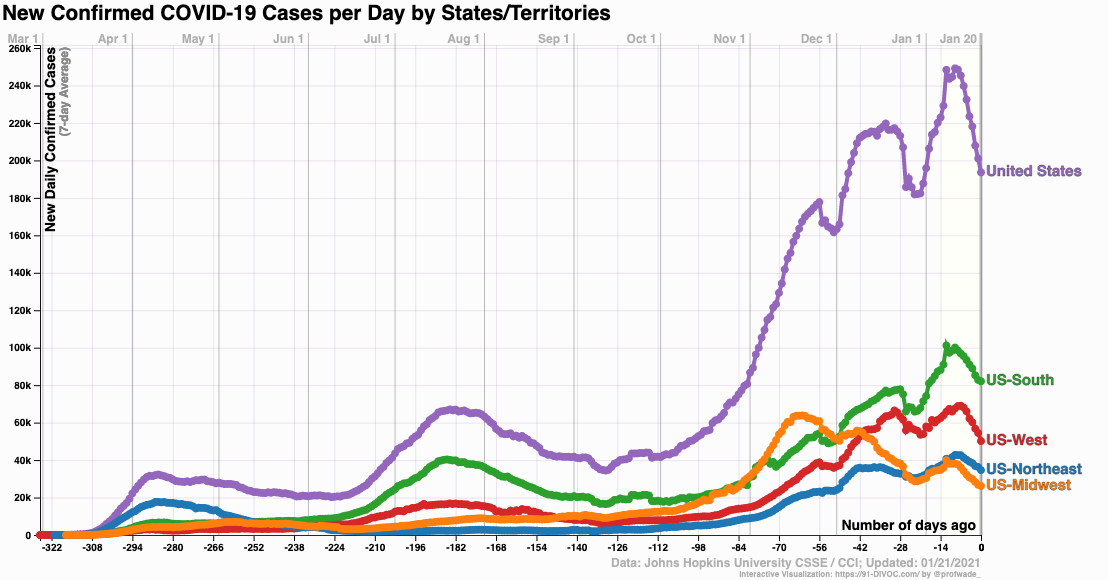 Or – just maybe, finally – approaching herd immunity? It could happen. Indeed, someday, it will happen. In spite of the WHO changing the definition on their website (and simultaneously burying the evidence of this change at the wayback machine), science tells us that once enough people get infected and recover, the pandemic dies out. Are we there yet? I was all confident back in the summer. Now? I just don’t know. But – maybe.

Of course, we are nowhere near the requirements for “vaccinated herd immunity” – which is north of 80% of the population, according to Fauci. So this cannot possibly be due to the vaccines.

It will be interesting to see how this plays out. If the market starts to sniff out that this phase of the pandemic is approaching an end, it will react – although which way it jumps is really anyone’s guess. Call this a hovering grey swan. Is it reacting right now – the reversal in PM? Maybe so.

Now then, about this Inauguration, and the incipient arrival of Unity, and Peace in Our Time: two views, provided today by two very different observers. And a pithy summary. So, two views and a summary:

1) “Members of the Biden Team who have been nominated or who have been appointed, are now moving in laser-like fashion, to try to uncover as much as they can about what looks very similar to to insurgency movements that we’ve seen overseas. Where they germinate in different parts of the country, and they gain strength, and it brings together an unholy alliance, frequently, of: religious extremists, authoritarians, fascists, bigots, racists, nativists…even libertarians.” — John Brennan, former CIA chief, today on MSNBC.

2) “One of the things I’m really hoping for is that we can finally get out of enough people, [is] believing that the way to understand Washington is Democrat vs Republican, and that you side with one team and believe that they are on your side, and defending your interest, and the other team is your enemy. It is NOT TRUE. There is a ruling class elite that is extremely comfortable with the establishment wings of both parties. They love Nancy Pelosi and Chuck Schumer every bit as much as they love Mitch McConnell and Mitt Romney and Marco Rubio and Paul Ryan.” — Glenn Greenwald, today on Tucker Carlson at Fox.

Curiously, both observers are saying exactly the same thing, each in their own way.

“First they came for the Libertarians. But I said nothing, for I was not a libertarian.”

I have the same feeling about herd immunity Dave.  When the vaccine finally arrives in mass, most places may have achieved it.  But, of course, time will tell.

And of course, now that Unity is here, we can reduce the case count by eliminating the false positives and using sane PCR cycle threshholds.

Dropping the PCR cycle thresholds, just after the impending (possible) herd immunity.  Couple this with finally allowing Ivermectin.  Which is starting to seem more and more like a done deal.

* This doctor believes that ivermectin is about to get an emergency market authorization in France as, unlike hydroxychloroquine, it does not suffer from heterogeneous randomized trial’s results and it raises no safety concern.

* The weekly number ivermectin prescriptions keeps growing in the USA and was 50,000 for the week ending January 8.

* WHO to probe use of Ivermectin for Covid-19 treatment after ’promising’ results in trials.

HCQ also endorsed by JAMA last week.  The narrative is on overdrive…

Whatever happened to “Dark Winter”? — maybe that will be when the South African COVID variant gets loose (plasma-based antibody therapies are not affecting that variant, which implies vaccine-induced antibodies may also prove ineffective, in which case…).

Stay on your toes, everybody.  We’re just getting to the second act…

I remember that you posted a chart of “deaths from all causes” VS time. Can you do your magic to produce and post an up-to-date version? If Wuhan flu deaths are up as much as normal flu deaths (and heart attacks, etc.) are down, the chart should show that. Based on what we would normally expect the number of deaths to be given the time of year, we could calculate a number that would be “excess.”

So there are excess deaths, even with my lines.  The pandemic is a real thing.  But – and here’s the thing – lockdown stress also provably hoses the immune system.  And not by a little bit.  (Study below – in rats).  So in a lockdown, you’d expect deaths (for medical reasons) of all sorts to rise.  Along with suicides, and drug overdoses.

Of course we can use meditation to counter this “government-imposed immune system disregulation”, but most people don’t.  [In the rats, they used quercetin, vitamin C, and zinc, and that seemed to help quite a bit.  FWIW.]

The “near term” model for bitcoin seems to be reasonably predictive.  Today it says: no interim low yet, but it looks neutral now rather than bearish.  Longer term (14-day) model is neutral also. 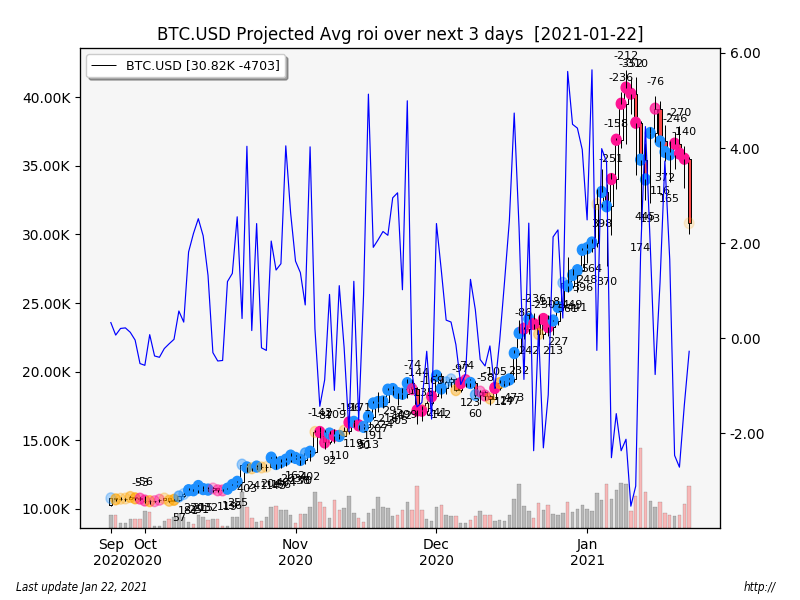 Thanks for the update. I see the dip you’re talking about. I don’t know if I’m more angered or disgusted by the shenanigans. Lots of efforts on all fronts to make this disease appear worse than it actually is. Hmmm.

One good thing about the plandemic for me is that my understanding of viral diseases has increased dramatically. Now, I take a daily dose of vitamins (including niacin) and minerals. I haven’t had so much as a sniffle this winter.

It would be interesting to see that red line plotted from earlier than winter 2017.  With the very low slope, it would not take much for for the graph to be off based on the starting point chosen.