The phase 1 trade deal was signed today; the media mostly said that it was lame, didn’t go far enough, “experts were skeptical”, and so on. Back in prehistory – 3 years ago – the media opined that Trump was an idiot for using tariffs to try to get a trade deal with China. Now they complain that Trump was not tough enough on China. Its as if they think we don’t have a functioning memory.

FT has a semi-neutral summary of the contents. Note that China has promised to do some of these things in the past – but back then, there was no enforcement mechanism. Now there is. The USTR (or, on their side, their Vice-Premier) can re-impose tariffs if an issue (such as forced tech transfers, or IP theft) isn’t resolved after consultations.

Gold moved steadily higher throughout the trading day. The confirmed takuri line candle was a probable bullish reversal (50%), forecaster climbed, rising into an uptrend. Gold is back in an uptrend in all three timeframes.

Futures markets are predicting a 13% chance of a rate increase at the upcoming Fed meeting on Jan 30. 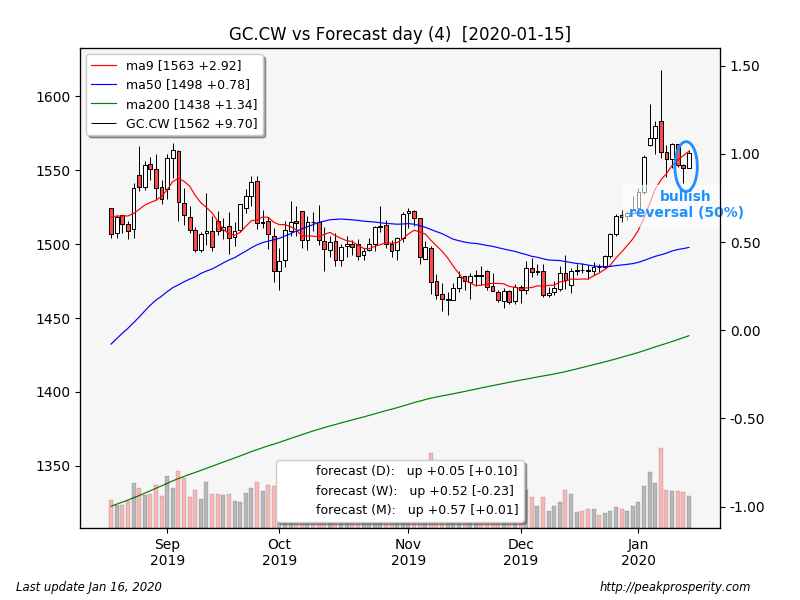 Silver chopped sideways until around 8:30 am, when it jumped about 20 cents in less than an hour, eventually closing the day near the highs. The swing low candle was neutral, and forecaster climbed, but remains in a downtrend. Silver is in an uptrend in the weekly and monthly timeframes.  Normally a swing low pattern tends to be quite bullish, but this one had a very low rating.  I’m not quite sure why. 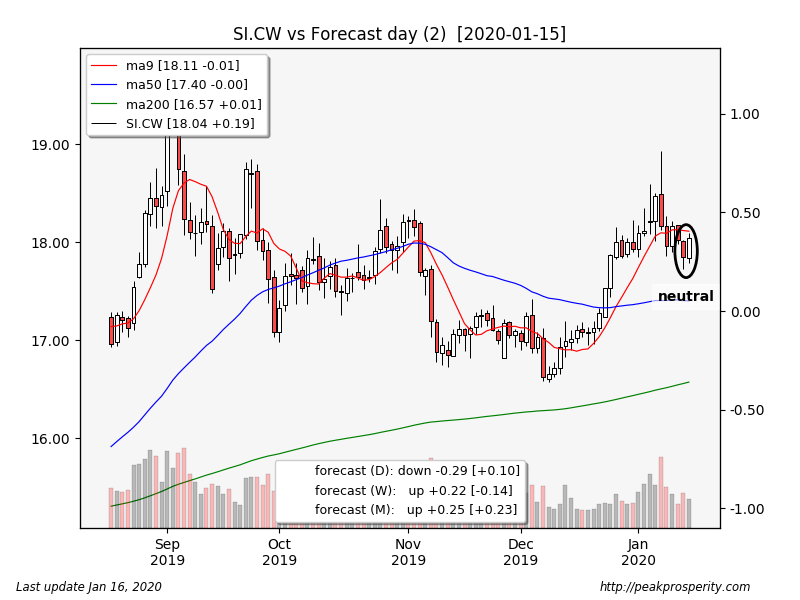 The miners opened even, and then moved steadily higher throughout the trading day, closing near the highs. GDX rose +1.88% on moderate volume, and GDXJ moved up +2.04% on moderate volume. XAU climbed +2.01%, the swing low candle was a reasonably strong bullish reversal (47%), and forecaster climbed, rising into an uptrend. XAU is now in an uptrend in the daily and monthly timeframes.  You can see the swing low for XAU has a fairly strong bullish rating – XAU is now back above the 9 MA, which is also a positive sign. 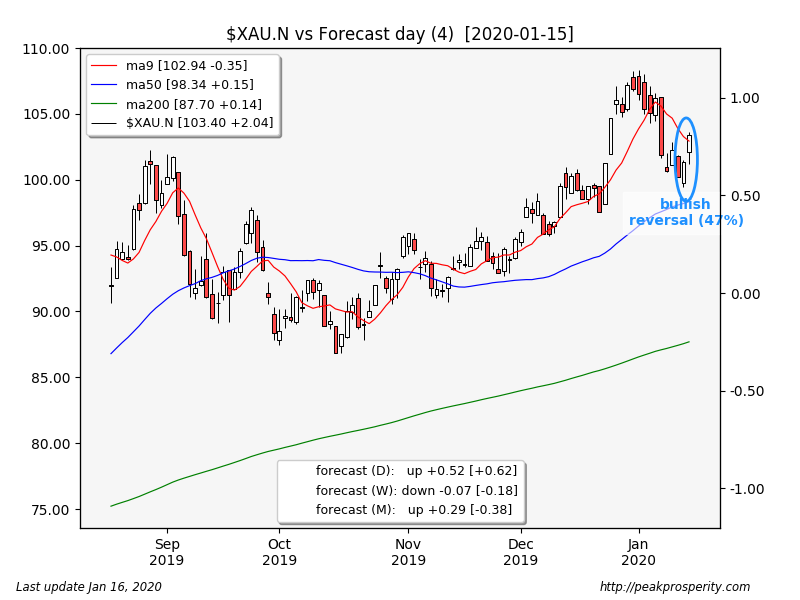 The buck fell -0.14 [-0.14%] to 96.82 on moderately light volume. The confirmed bearish doji candle was neutral, but forecaster fell, dropping into a downtrend. The buck is now in a downtrend in both the daily and weekly timeframes.

Crude inched down -0.04 [-0.07%] to 58.09 on moderate volume. The doji candle was a possible bullish reversal (32%), and forecaster jumped higher, moving into a state of no-trend. Crude is in an uptrend in the monthly timeframe, and may be about to reverse on the daily.

EIA report looked bearish: crude -2.5m, gasoline +6.7, distillates +8.2m. The numbers caused crude to sell off hard immediately upon release, but crude bounced back within a few hours, eliminating the EIA report losses. When the market rallies on bad news, that’s bullish. After 7 days of decline, we might be approaching the low for crude. 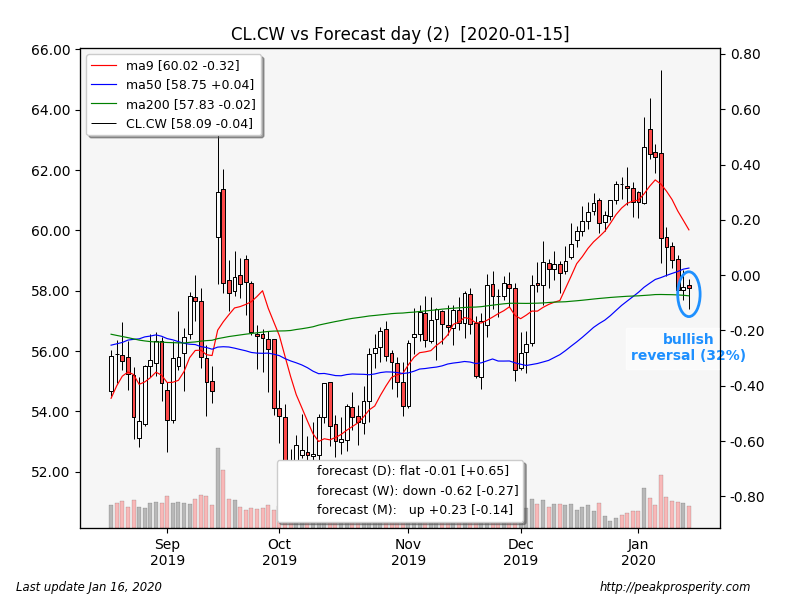 SPX moved up +6.14 [+0.19%] to 3289.29 on moderate volume. The spinning top candle was a bullish continuation, forecaster dropped, but remains in an uptrend. This was another new all time high for SPX, which is in an uptrend in all three timeframes.

TLT climbed +0.66%. The high wave candle was a bullish continuation, and forecaster climbed, moving higher into its uptrend. TLT is in an uptrend in the daily and weekly timeframes. The 30-Year yield fell -3.0 bp to +2.24%.

TY climbed +0.15%. The short white candle was a bullish continuation, forecaster climbed, moving higher into its uptrend. TY is in an uptrend in the daily and weekly timeframes. The 10-Year yield fell -3.0 bp to +1.79%.

Bonds appear to be recovering; the monthly downtrend is fading, and may be about to reverse.

JNK inched up +0.05%. The doji candle was a bullish continuation, forecaster dropped, but remains in an uptrend. JNK is in an uptrend in the daily timeframe. JNK continues to hover around its 2-year high.

Well it certainly looks as though gold, silver, and the miners are moving back into a daily uptrend. That’s the forecast anyway. Bonds are also strengthening, and – what’s the deal with platinum? I looked over at kitco for some wisdom, and found this revelation:

“Analysts were puzzled as to why the metal rose so much in one day with no significant news spotted by the experts. However, many cited the $1,000 an ounce level as a very important technical mark that needed to be breached.”

Right. They don’t know either. “Its a … round number thing?” I now feel better for having no clue.

Still no bearish reversal in SPX, although the utilities sector just broke out sharply to a new all time high today, up +1.40%. This is bearish because if you are expecting equities to move higher, you don’t load up on the slow-growing utility stocks whose main attraction is a dividend yield.  No, if you are betting on equities to rise, you want financials or tech – that is where the action is, at least in an uptrend anyway.

Likewise, the move into bonds and PM also suggests that money may be sneaking out the back door from risk into something safer.

Producer prices looked flat this month; that is neither expansionary or recessionary.

Now that the trade deal is done, my focus is now on Not-QE, and the upcoming Fed meeting (two weeks from now). The Fed Balance Sheet update is tomorrow, along with Retail Sales.

The signed trade deal should help business sentiment, at least to some degree, but I don’t think there is any equity-market juice left to squeeze from this particular orange.

“Analysts were puzzled as to why the metal rose so much in one day with no significant news spotted by the experts.”

I ‘love’ the assumption behind this statement; that any market must be a news driven market. Maybe some big consumer(s) of palladium did a stock take and/or demand projection and decided they were short?

I’m assuming you meant “platinum” and not “palladium”.

I mean, I look for explanations for these big moves, and sometimes there just isn’t any.  Does platinum always pop 4% on breakouts above previous highs?  I didn’t do the study.  Maybe this is just what platinum does.

I’m trying to come up with trading models for these commodities.  Needless to say, its a quagmire.  🙂