Gold fell hard in early Asia trading, managed to recover most of its losses relatively quickly, and then traded sideways for the remainder of the trading day. The takuri line candle was a reasonably strong bullish reversal (48%), forecaster climbed, but remains in a slight downtrend. Gold remains in a strong uptrend in the weekly and monthly timeframes, and that daily looks as though it may be about to reverse back up. The candle print was very strong for this candle type. This could be a reversal for gold. 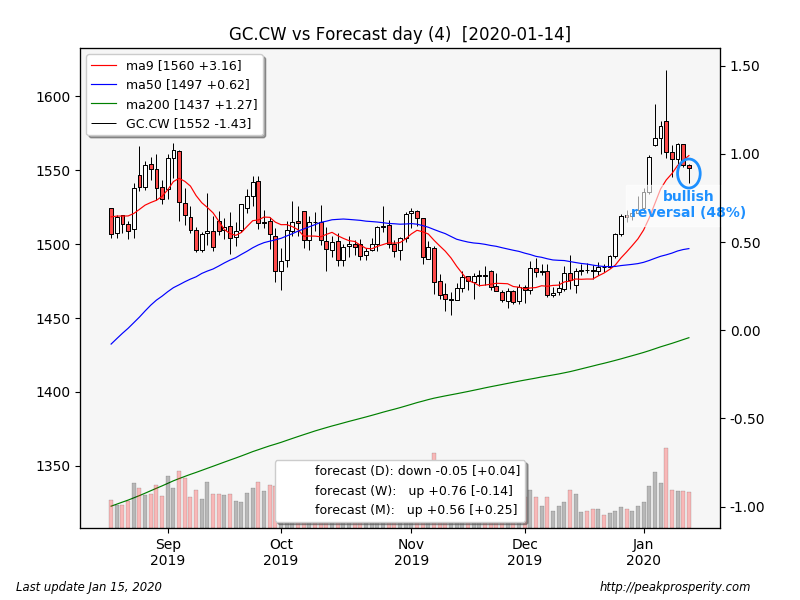 Silver fell in Asia along with gold, but was not able to recover, chopping sideways into the close. The long black candle was a bearish continuation, forecaster dropped, moving deeper into its downtrend. Silver is in a downtrend in both the daily and weekly timeframes. Silver’s new low today looks quite bearish, as does silver’s underperformance. 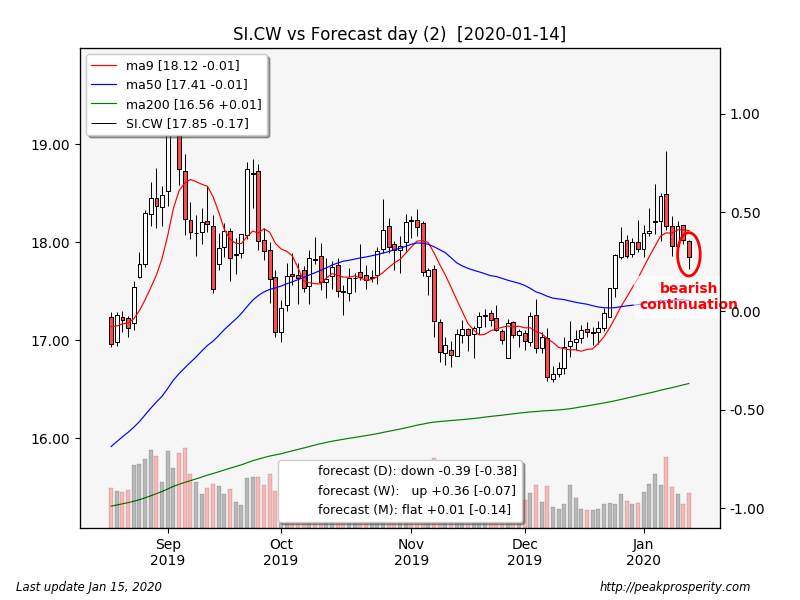 The miners rallied from the open to the close, ending the day quite close to the highs. GDX rallied +1.76% on moderately heavy volume, and GDXJ shot up +2.40% on moderately heavy volume. XAU moved up +1.17%, the long white candle was a possible bullish reversal (37%) but forecaster fell, moving deeper into its downtrend. XAU is in a downtrend in both the daily and weekly timeframes. This looks like a possible (low percentage) reversal for the miners today. 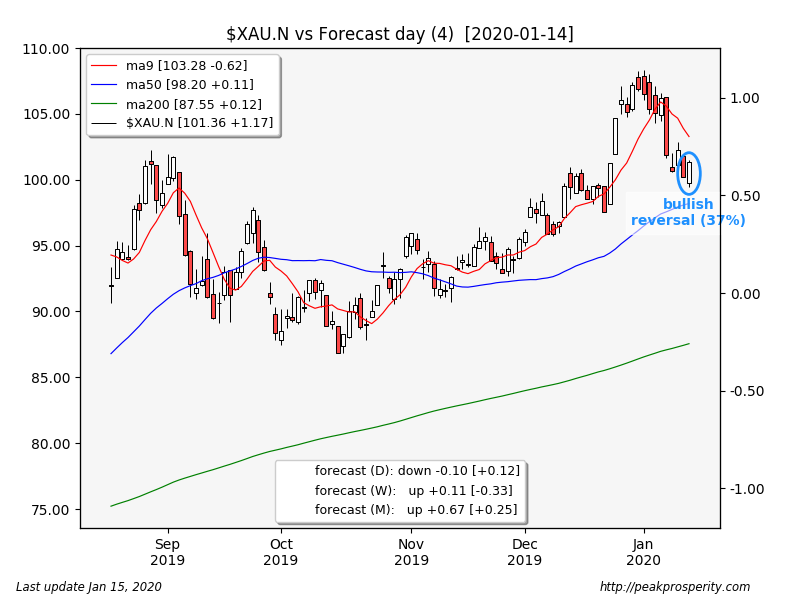 Crude moved up +0.09 [+0.16%] to 58.13 on moderately heavy volume. The bullish doji star candle was a bearish continuation, forecaster dropped, moving deeper into its downtrend. Crude remains in a strong downtrend in both the daily and weekly timeframes. No bullish reversal from crude just yet, although the 200 MA continues to provide support. 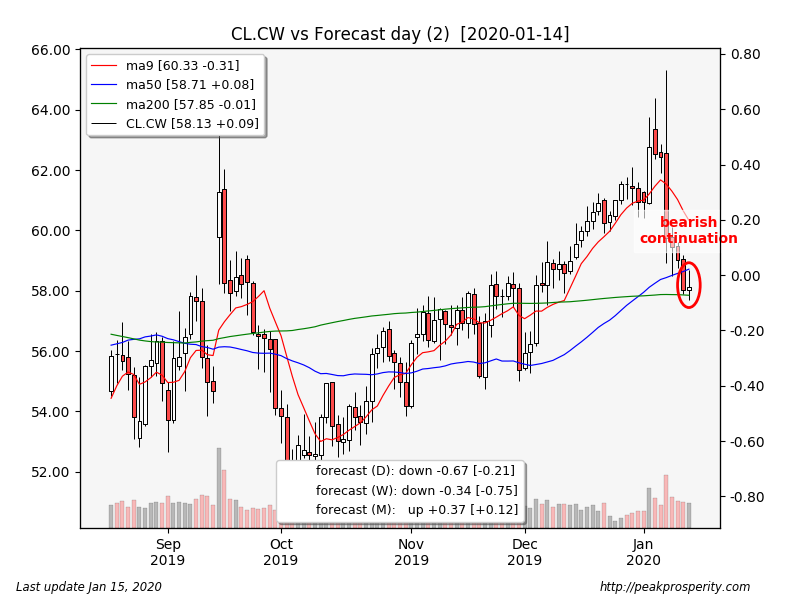 SPX fell -4.98 [-0.15%] to 3283.15 on moderately heavy volume. The long black candle was a possible bearish reversal (35%), but forecaster climbed, moving higher into its uptrend. SPX remains in a strong uptrend in all three timeframes.

TLT climbed +0.51%. The opening white marubozu candle was a bullish continuation, and forecaster climbed, moving higher into its uptrend. TLT remains in an uptrend in the daily and weekly timeframes. The 30-Year yield fell -2.0 bp to +2.28%. Today’s move took TLT back above its 50 MA, which is a bullish sign.

TY rose also, up +0.22%. The long white candle was neutral, but forecaster climbed, rising into an uptrend. TY is now in an uptrend in the daily and weekly timeframes. The 10-Year yield fell -2.0 bp to +1.82%. TY is also back above its 50 MA. Bonds are starting to – slowly – show signs of life.

JNK fell -0.05%. The doji candle was neutral, but forecaster climbed, moving higher into itsptrend. JNK is in an uptrend in the daily timeframe. JNK continues to hover up around 2-year highs.

Headline number is somewhat inflationary, but the “core” inflation number is not.

Tomorrow, Trump signs the long-awaited US-China trade deal. Exactly what is in the deal? Well, we have to wait until it is signed before we find out. This reminds me of Obamacare. Lighthizer has made happy noises about it, with the caveat that China may well not hold to the terms. This, because the mainlanders have a distressing [to the West] tendency of not holding to agreements they make – a story for another time. Schumer, of course, thinks it is too weak – as opposed to Obama doing nothing about China for 8 long years and apparently just “hoping for the best.”

The “US Chamber of Commerce” – apparently utterly bought out by the CCP – made noises at the start at what a terrible idea this whole thing was, but a metaphorical (tariff) gun to the head was the only way to bring the CCP to the table. I’m just happy that Trump didn’t give up his remaining tariffs for just a bunch of pork and soybeans. 25% tariffs on $250 billion still remains in place, and another 7.5% tariffs on another $150 billion. And Huawei remains under the microscope, as well it should be. During the Cold War, would we have let a Russian company build our telecom infrastructure? No we would not! We weren’t idiots. It is nice to see sanity prevailing once again.

Market-wise, is the signing of the trade deal a sell-the-news event? Copper (with its new high today) seems to be suggesting “not yet”, although SPX did show a touch of weakness: the equity sector map today looked a bit bearish (you never like to see Utilities leading), and bonds were catching a bid, as were the miners. And SPX weekly RSI7 is at a nosebleed 89, which ranks in the top 1% in terms of “overbought” conditions.

So – a sell-the-news equity market story makes sense from the meta analysis (good news is all in now), as well as technically (heavily overbought), as well as the hints from related markets that money may be starting to sneak out the back door.

We will have to see what the market tells us tomorrow. If today’s trickle of money starts to become a flood, it will be visible…and with prices this elevated, a move down could be fairly brisk.