Gold fell fairly hard during the Asia session, tried to rally during London, then dropped again during US hours, ending the day at the lows. The black marubozu candle was a bearish continuation, and forecaster climbed, but remains in a downtrend. Gold remains in a strong uptrend in both the weekly and monthly timeframes. 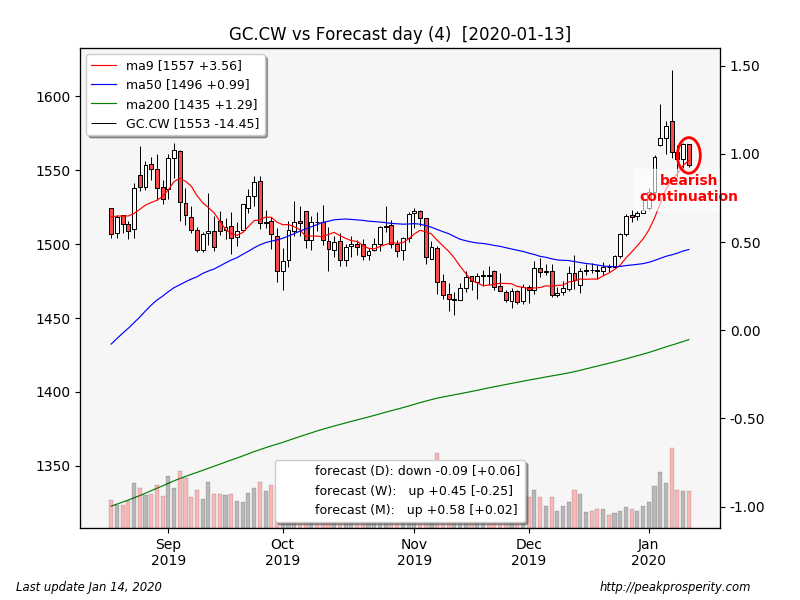 Silver moved slowly lower for most for the day. The short black/NR7 candle was unrated, and forecaster climbed, and has moved into a no-trend state. Silver is in an uptrend in the weekly and monthly timeframes. Note that silver fell less than gold today – and the intraday moves looked fairly benign. Maybe that was due to less of a rise in OI – detailed below? Hard to know. 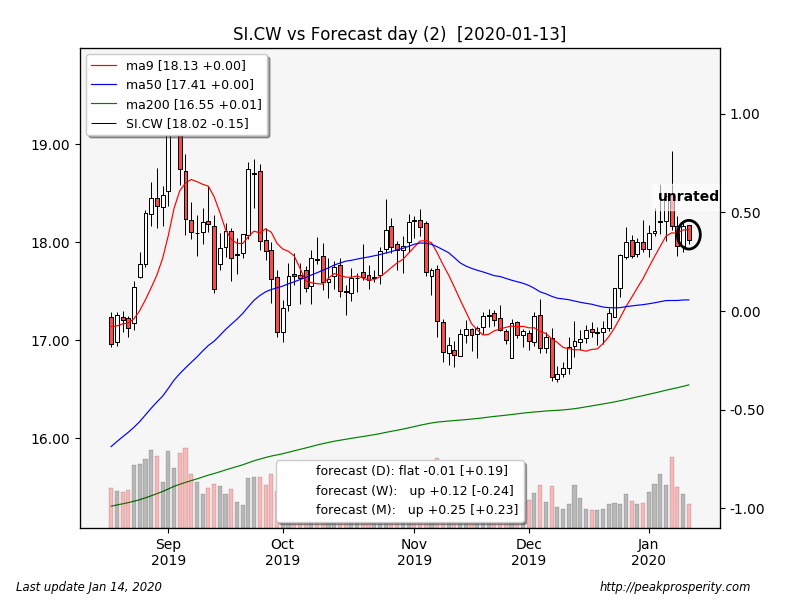 Since the miners tend to lead, today’s plunge (without a hint of a bounce) suggests we may have farther to fall – the miners looked pretty weak today. 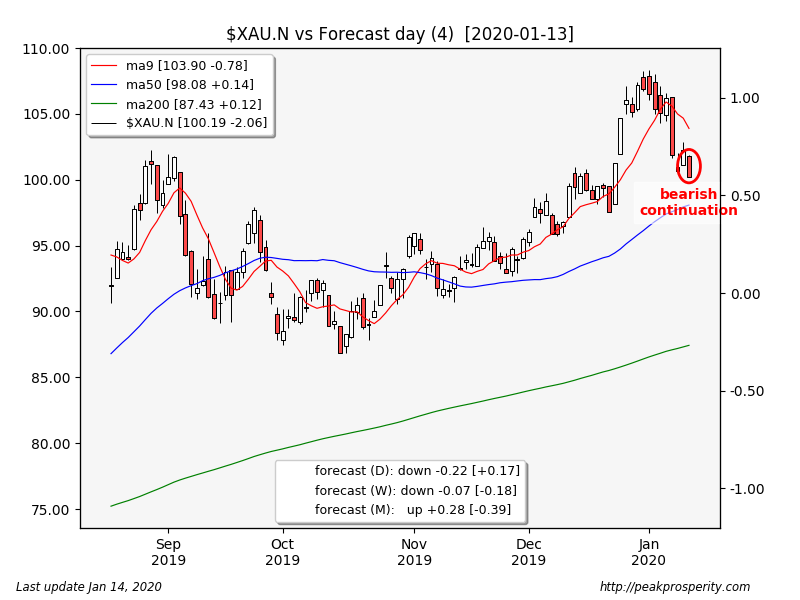 Crude dropped -0.97 [-1.64%] to 58.04 on moderately heavy volume. The long black candle was a bearish continuation, and while forecaster moved higher, it remains in a downtrend. Crude is in a downtrend in both the daily and weekly timeframes – both downtrends are strong.

Crude’s drop today took it through the 50 MA, which is bearish, but it seemed to find support at the 200. Crude’s sharp drop following the failure of WW3 to materialize suggests that crude’s 3-month rally may have mostly been about Iran, and that rally is now rapidly unwinding.

SPX jumped +22.78 [+0.70%] to 3288.13 on moderate volume. That’s another new all time high for SPX. The long white candle was a bullish continuation, and while forecaster dropped, it remains in an uptrend. SPX remains in a strong uptrend in all three timeframes.

TLT fell -0.30%. The short white candle was a bullish continuation, and forecaster climbed, moving higher into its uptrend. TLT remains in an uptrend in the daily and weekly timeframes. The 30-Year yield rose +2.0 bp to +2.30%.

TY fell also, moving down -0.17%. The short black candle was unrated, but forecaster dropped, moving into a downtrend. TY is now in a downtrend in both the daily and monthly timeframes. The 10-Year yield rose +1.0 bp to +1.84%. Basically, the 10-year is a confused state of no trend right now.

JNK inched up +0.04%. The doji candle was a bullish continuation, and forecaster climbed, moving higher into its uptrend. Today was another 2-year high for crappy debt. JNK remains in an uptrend in the daily timeframe.

It was another leg down for the mining shares, which seem to be leading PM downhill right now. Peace, it seems, is not great for the yellow metal, and it is even worse for crude.

Equities keep plowing higher. I know opinions differ as to why this is happening; are “bots” responsible? Well if “bots” were all-powerful, then the crash that happened in Dec 2018 would never have happened. My explanation: it is all about money flows. It is a simple explanation – more money flowing in than out = prices rise.

In truth, money doesn’t actually “flow” in – there is just on balance more cash interested in buying than the current holders have in selling. So technically, “more buy side interest than sell side interest.” But my shorthand for that is, money is flowing into the market – from stock buybacks, money printing leading to “excess reserves” that “need to be put to work”, increased speculation, foreign central bank purchases, etc.

Bottom line though – equities rise because of buy-side interest, not because of “bots”. And we just hit another new all time high today.

Remember that Martin Armstrong (almost unique among people I read) projected a sharp rally in equities? The rally didn’t make sense to me, and it still doesn’t, but here we are. My computer has kept me on the right side of this one. That’s why I constructed it; to tell me what it believes the near-term future trend will be, so I don’t take positions based on hope or opinion.

Since miners usually lead, it would appear as though prices will probably move lower in the PM sector over the near term, absent any alarming news items.

Speaking of which, Pelosi has scheduled “Impeachment” to hit the Senate on the same day that Trump will be signing the US-China trade deal. Is this alarming news to the market? Hah. No. The market believes “Impeachment” is a nothing-burger. The sharp rise in copper today (along with the rallies in equities and junky debt) tells us this.

Likewise: if the CCP thought there was any chance “Impeachment” would work, they would not be signing anything. They have zero interest – actually, they have negative interest – in a trade deal. They are only signing one to avoid the prospect of yet more tariffs and even more “decoupling.”

Speaking of trading on opinions, what about a “sell the news” pullback when the trade deal is announced? With Tesla and Apple going ballistic and the Fear vs Greed Index hitting a 93 – Extreme Greed last week, the market does seem overripe for a large burp, if not a projectile vomit.

Perhaps you covered this already, I need to catch up as I’ve been away.

Thanks again for your good work….J

Yes, what you say does make sense.  I’ll write about it in the daily report, how about that.  🙂