Gold rallied in Asia, fell in London, then rallied once more in the afternoon in New York. The spinning top candle was a bullish continuation, forecaster climbed, rising into an uptrend. Gold is in an uptrend in the daily and monthly timeframes.

Gold/euros climbed +8.00 [+0.53%] to 1525.88 on heavy volume. The spinning top candle was a low-percentage bearish reversal (29%), forecaster climbed, rising into an uptrend. Gold/euros is in an uptrend in all three timeframes.

Today’s close for gold wasn’t quite strong enough for a formal swing low candle pattern. Forecaster liked the move a lot, however and said it was good enough for a mild bullish reversal. Given the strong plunge in the buck, much of today’s move was just a currency effect – the rally in gold during US hours definitely seemed to be affected by the falling dollar. Gold/Euros is also back in an uptrend, although a very mild one. 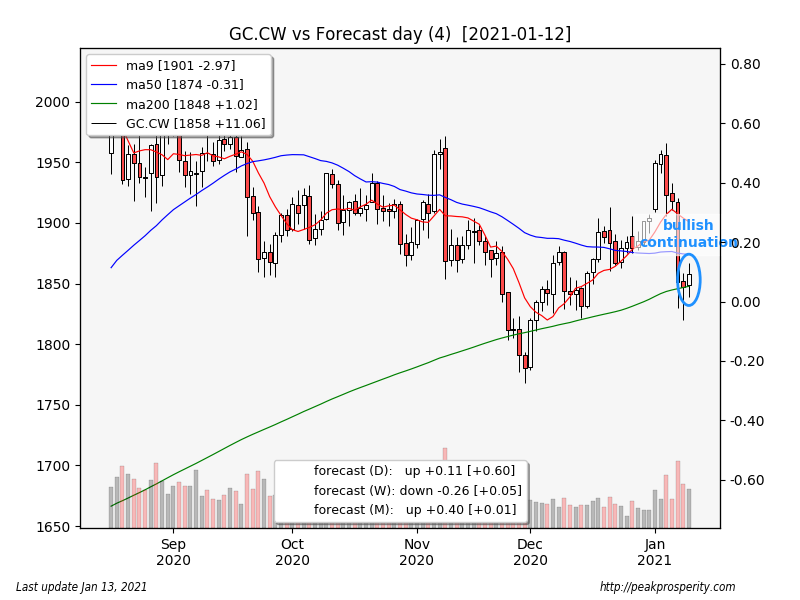 Silver chopped higher for most of the day, ending near the highs. The swing low2 candle was a probable bullish reversal (53%), forecaster climbed, but remains in a downtrend. Silver is in an uptrend in the monthly timeframe.

Unlike gold, silver printed a highly-rated swing low pattern, but forecaster wasn’t quite convinced just yet. Let’s call this a possible bullish reversal. While silver did look strong today, the damage from last Friday’s plunge was severe enough that it will take a bit more of a rally to overcome. 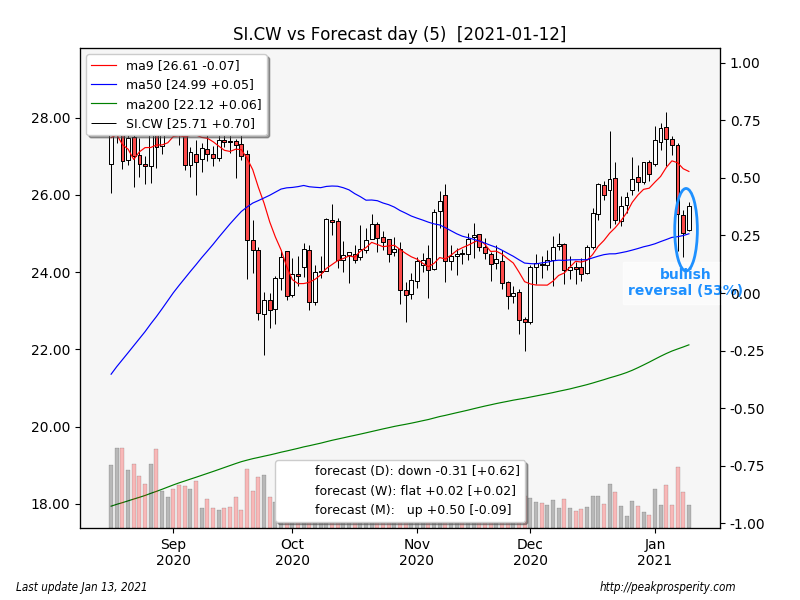 Well takuri line is usually a bullish print, but not today, apparently. The miners will need confirmation tomorrow for this to be called a bullish reversal. Miners remain in a mild downtrend in all timeframes. 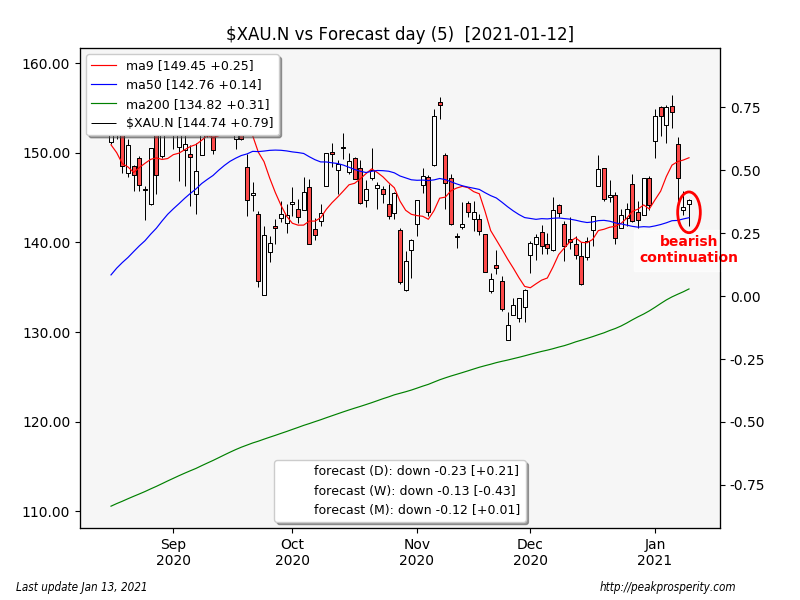 Copper shot up +0.08 [+2.25%] to 3.63 on moderately heavy volume. The bullish harami candle was a bearish continuation, forecaster climbed, rising into an uptrend. Copper is in an uptrend in all three timeframes.

Well. That was a short plunge. Copper retraced a bunch of yesterday’s decline – and is now back above the 9 MA, and also back in an uptrend, although the harami candle print wasn’t bullish. 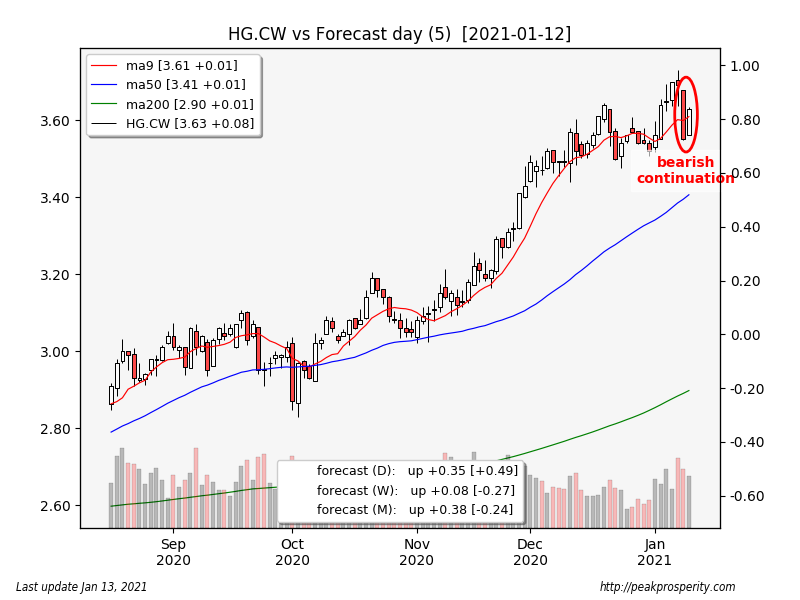 The buck dropped -0.38 [-0.42%] to 90.05 on moderate volume. The bearish engulfing candle was a reasonably strong bearish reversal (41%), forecaster dropped, but remains in an uptrend. The buck is in a downtrend in both the weekly and monthly timeframes.

The engulfing pattern was actually fairly bearish, but it wasn’t enough to pull forecaster back into a downtrend, and the buck remains above the 9 MA. The move did help gold to rally. 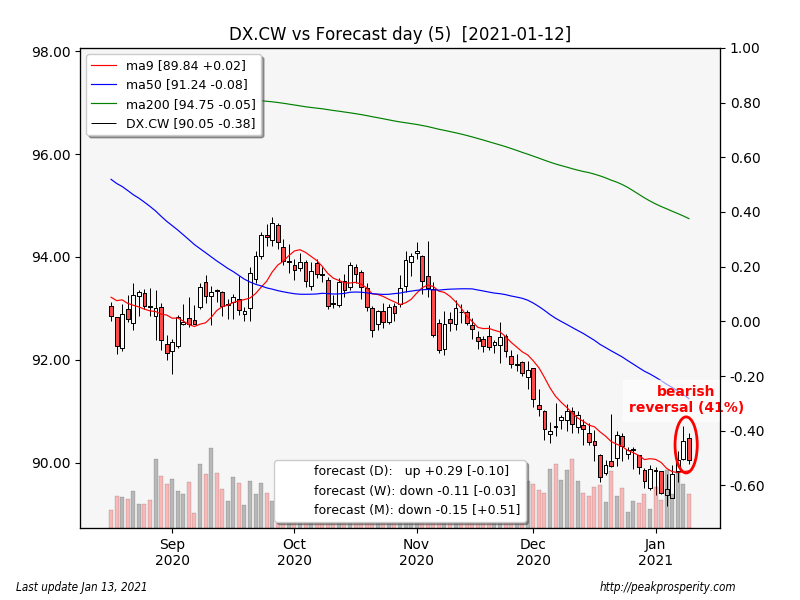 Crude moved up +1.10 [+2.11%] to 53.29 on moderately heavy volume. The opening white marubozu candle was a bullish continuation, forecaster climbed, moving higher into its uptrend. Crude is in an uptrend in all three timeframes.

Hmmm. With all the fuss over “the scary new variant”, along with “the slow vaccine rollout”, why this strong crude rally? Is this only about Saudi Arabia taking 1 mbpd off the market? Or is the market sniffing something else out? I mean, if Ivermectin was widely accepted – or about to be widely accepted – then this behavior in crude makes more sense.

Still no change from WCRFPUS2: 11 mbpd for US field production of crude. We do not seem to be playing out the doomsday scenario laid out by Art Berman six months ago. 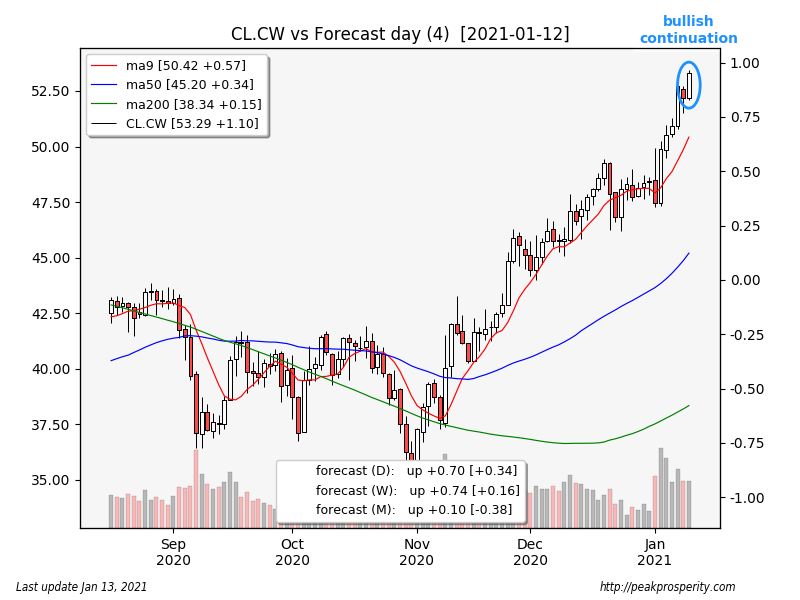 SPX inched up +1.58 [+0.04%] to 3801.19 on moderately heavy volume. The doji candle was a bearish continuation, forecaster dropped, but remains in an uptrend. SPX is in an uptrend in all three timeframes.

No real change for SPX today; the sector map looked bullish, and SPX remains above the 9 MA. Uptrend remains in place. 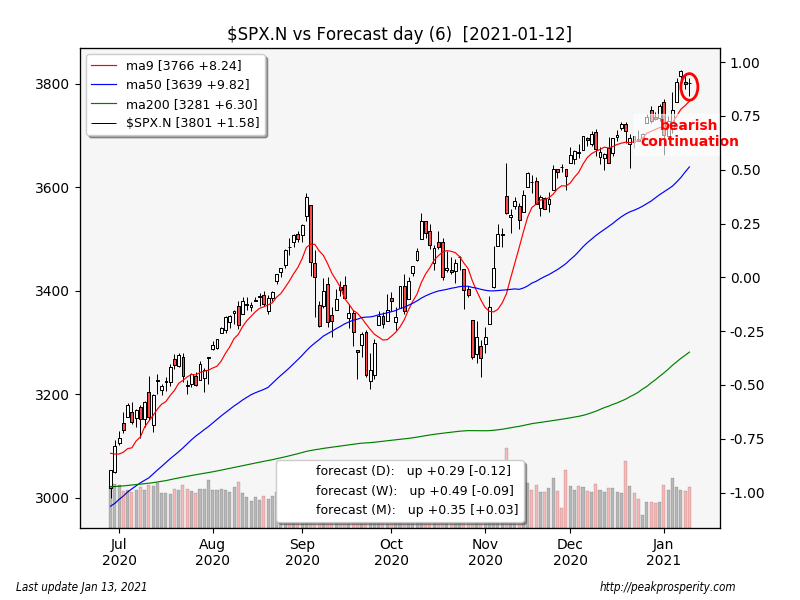 TLT inched down -0.08%. The long white candle was a possible bullish reversal (36%), forecaster climbed, but remains in a downtrend. TLT is in a downtrend in both the daily and weekly timeframes. The 30-Year yield fell -1.0 bp to +1.87%.

TY climbed +0.07%. The hammer candle was a reasonably strong bullish reversal (48%), forecaster climbed, but remains in a downtrend. TY is in a downtrend in all three timeframes. The 10-Year yield fell -2.0 bp to +1.13%.

Bonds sold off in Asia and London, hit bottom at 11 am in New York, then rallied sharply into the close. The candle print was a very highly rated hammer print, but it was not enough to pull the 10-year out of its downtrend. So while this was not an official reversal, we might be getting closer to a low for bonds, at least in the short term. 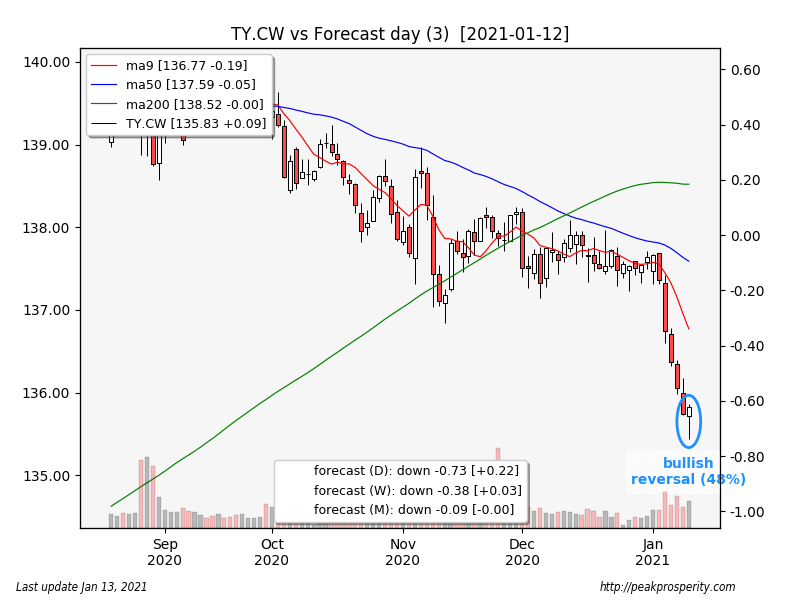 JNK climbed +0.15%. The long white candle was a bearish continuation, forecaster climbed, but remains in a downtrend. JNK is in an uptrend in the weekly timeframe.

Well, crappy debt moved higher, but it wasn’t enough for a reversal. JNK remains below the 9 MA, but the JNK downtrend is also relatively mild. 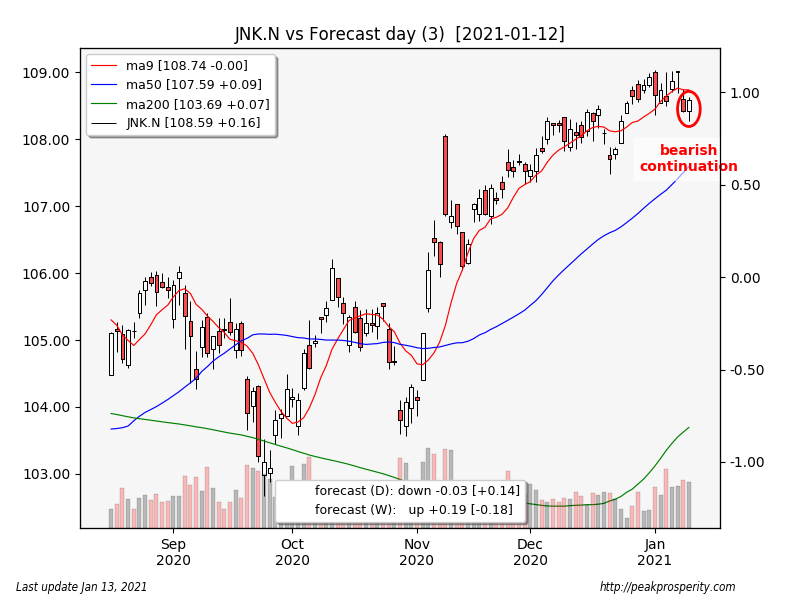 The GLD ETF tonnage on hand was unchanged at +0.00 tons, with 1182 tons remaining in inventory.

Gold, silver, and the miners moved higher today, with silver doing best. There were various levels of bullish reversal among the components. How much of the rally was about the drop in the buck? A fair bit, I think; both the miner rally, and the gold rally, happened right alongside the drop in the buck that started a bit after 11 am in New York.

Bonds also may have put in a low today, although the certainty around that is a bit lower.

Risk assets were generally positive; crude made a 1-year high, copper bounced back from yesterday’s large drop, while crappy debt and equities ended up mostly flat.

The ongoing move in crude has me wondering what’s up. Is this an Ivermectin signal? Certainly the pandemic data isn’t looking any better right now. They say its just about the Saudis unilaterally cutting production.

Twitter [-2.37%] and Facebook [-2.24%] both dropped today; will the weekend Parler takedown attempt mark Peak Social Media? I certainly hope so. Monopolies kill – they kill capitalism, democracy, and freedom of speech – monopolies are bad, and have always been bad since the days of Teddy Roosevelt. Let’s hope that Big Tech’s fascist act ends up sewing the seeds of their own destruction.

You might consider http://gab.com – gab has a reasonable interface, it seems to work fairly well. And it isn’t “creepy facebook.”

I saw an interesting article on Oilprice – the CCP is angry at Australia for supporting an international inquiry into the CCP handling of the corona virus pandemic. As part of the spanking administered by the CCP, Australia’s coal has been informally blacklisted. No exports for you, Australia. How is that going?

+ this year was a particularly cold winter in China
+ China is the largest coal consumer in the world
+ AU is one of China’s biggest suppliers
+ No AU imports are allowed right now
+ Local coalminers cannot ramp up production rapidly enough to make up the difference
+ Price in China screamed higher; the CCP then ordered the “Coal Index” to stop being published in December
+ Power rationing is now under way; many cities are reportedly “going dark” – in the middle of winter!
+ In China, if you complain about this, your account is deleted, and you are put on a domestic “no fly” list.

Oh sorry. That last one was the US. Easy mistake to make, though.

I think that the influx of members has overwhelmed the server capacity.  Currently works best about 4 am – 5 am!

Hopefully will work out the bandwidth issue.

“The ongoing move in crude has me wondering what’s up. Is this an Ivermectin signal? Certainly the pandemic data isn’t looking any better right now. They say its just about the Saudis unilaterally cutting production.”

YES, it is about all those things including herd immunity and the vaccine.  One day, we will understand that we had been living very unhealthy lives.  Chris had the concoction pretty much on target from the start.  People just had to follow it.  The carnage has been sad but the end is in sight.  Hurrah!

Last week, Goldman sparked a buying frenzy in the market (and selling in treasuries) when the bank said it expects the Biden admin would unveil a “modest” $750 billion fiscal stimulus plan….

According to Bloomberg, “the two have discussed Biden’s plans ahead of the president-elect’s announcement on his economic-rebuilding proposals… Biden is set to speak at 7:15 p.m. Thursday to outline “his vaccination and economic rescue legislative package.”

But if markets ignored the Schumer report, they sure as hell noticed the CNN report which hit just after 9pmET, which prompted traders to take a double take because apparently Schumer “pressed” Biden so hard to expand the next stimulus round, he literally squashed the president-elect, who is now “expected to unveil a major Covid-19 relief package on Thursday and his advisers have recently told allies in Congress to expect a price tag in the ballpark of $2 trillion,“….

YES, it is about all those things including herd immunity and the vaccine. One day, we will understand that we had been living very unhealthy lives. Chris had the concoction pretty much on target from the start. People just had to follow it. The carnage has been sad but the end is in sight. Hurrah!

Amen to the “unhealthy lives” statement. So much I didn’t realize before.  Now I do.  I feel armed and dangerous!  Healthwise.

It would be interesting to come up with a seroprevalence assessment for the US.  How close are we to that mysterious herd immunity?  Back in the summer it looked to me that it might be 20%.  Are we there yet?

Here’s a paper – a grand meta-analysis of seroprevalence worldwide.

I haven’t gone through it thoroughly, but it suggests (in the conclusion) that “cumulative positive tests” will vastly underestimate the seroprevalance of this virus, and [my observation] the expected distance from herd immunity.

But…here’s another one on “seroreversion”, which says that a certain class of (easily measured) antibodies go away after six months.

Could these be the same seroreverting antibodies that the “vaccines” convince our bodies to construct?

… an important new realization came to the fore, namely, the apparent rapid waning of specific antibodies against the virus to undetectable levels, or seroreversion. Researchers have found that antibody titers are inferior to cellular immunity as indicators of long-term immunity, preventing reinfection, but it is more difficult and expensive to measure the latter.

It doesn’t mean the previously-infected don’t have immunity.  It is just hard and expensive to measure.  Otherwise we’d be seeing lots of reinfection cases.