Gold sold off hard early in Asia, reboounded, sold off again during London, bounced back once more, then faded slightly into the close. The high wave candle was a possible bullish reversal (34%), forecaster climbed, but remains in a downtrend. Gold is in a downtrend in both the daily and weekly timeframes.

Gold/euros climbed +6.63 [+0.44%] to 1517.88 on very heavy volume. The long black candle was unrated, forecaster climbed, but remains in a downtrend. Gold/euros is in an uptrend in the weekly and monthly timeframes.

While this wasn’t a formal instant-on spike down like what happened on Friday, the selling was pretty intense, and the rebound was just about as intense. It looked as though there were a lot of buyers as gold dropped below 1850. Gold ended the day right at the 200 MA. While the dollar rallied all day long, the moves in the currency were not tied directly to the moves in gold. 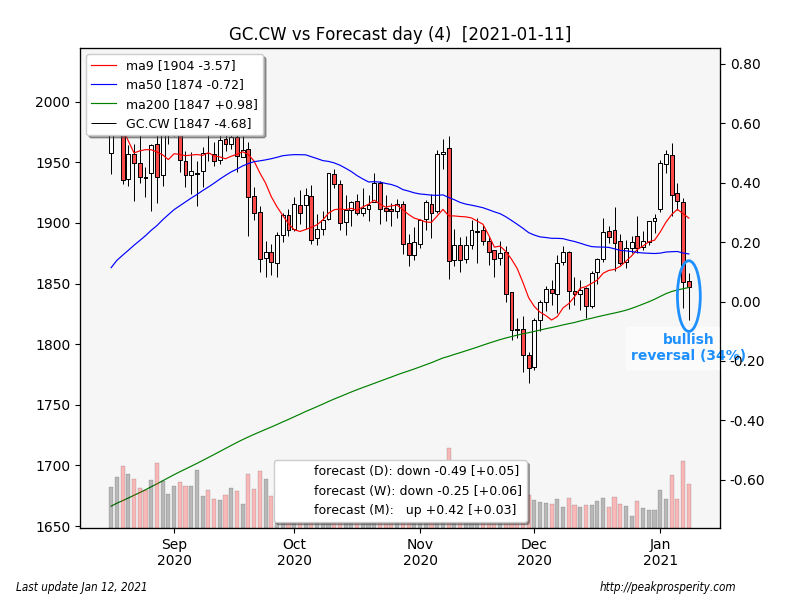 Silver also dropped hard in Asia, and once again just before the US market opened, then it rallied back but faded into the close. The long black candle was a possible bullish reversal (35%), but forecaster dropped, moving deeper into its downtrend. Silver is in a downtrend in both the daily and weekly timeframes.

Silver didn’t look nearly as strong as gold today, mainly because the drift lower during the day in New York. Still, silver’s chart has it ending the day just above the 50 MA – it is far above the 200, so the longer term chart looks substantially better for silver than it does for gold. As with gold, this isn’t a reversal for silver just yet – we need a confirmation tomorrow. 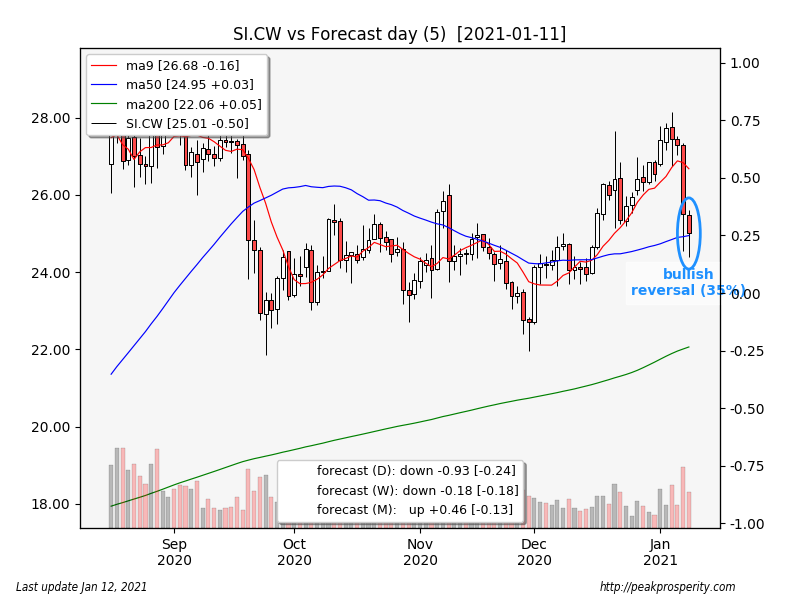 The miners gapped down at the open, rallied during the first half of the day, but then retreated into the close. GDX dropped -2.03% on moderate volume, and GDXJ fell -2.20% on moderately heavy volume. XAU moved down -2.23%, the short white candle was a bearish continuation, forecaster dropped, moving deeper into its downtrend. XAU is in a downtrend in both the daily and monthly timeframes.

Miners continue to be in a downtrend; they did not reverse today either. 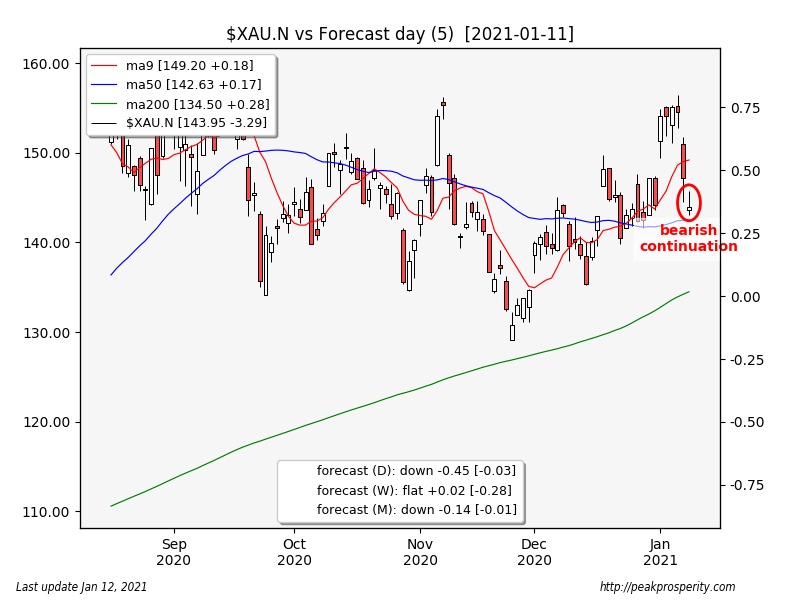 Wow, copper was just crushed today. This was enough to push copper into a downtrend in both the daily and weekly timeframes – never mind the very bearish daily candle print. News suggested it was about the rising buck, alongside new infections in China. Whatever the trigger – it was the largest daily move down in more than 3 months. Copper is now below the 9 MA. 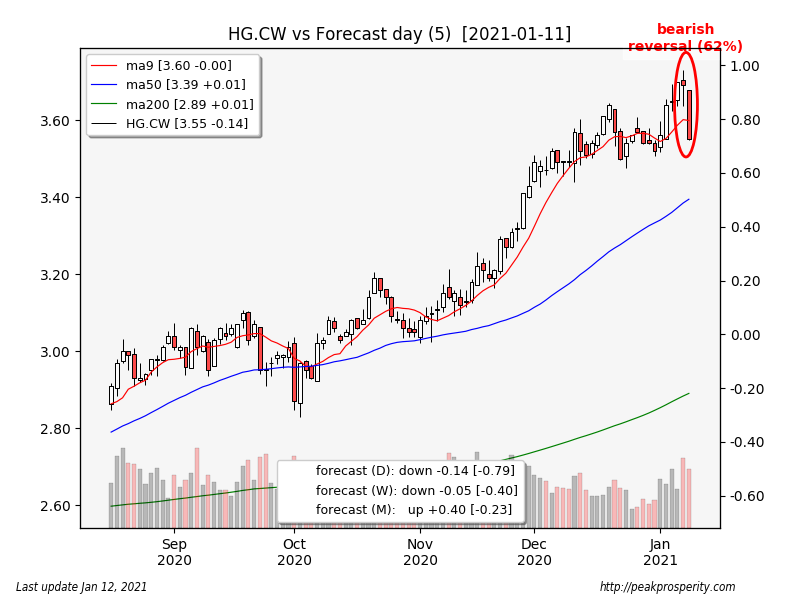 The buck climbed +0.37 [+0.41%] to 90.43 on moderate volume. The long white candle was a possible bearish reversal (31%), forecaster dropped, but remains in an uptrend. The buck is in a downtrend in both the weekly and monthly timeframes.

Money continues to flow into the buck; this marks the fourth straight day of the dollar moving higher. Next stop: the 50
MA – the buck hasn’t been above the 50 since early November. 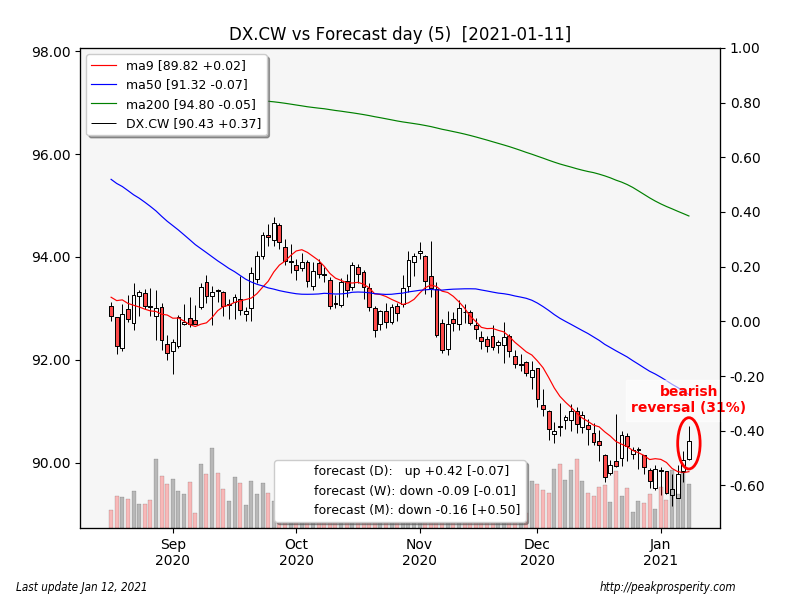 Crude fell -0.52 [-0.99%] to 52.19 on moderately heavy volume. The bearish harami candle was a bullish continuation, forecaster dropped, but remains in an uptrend. Crude is in an uptrend in all three timeframes.

While the candle print didn’t look particularly bad, forecaster weakened significantly; it may be time for a rest. Crude remains in an uptrend. 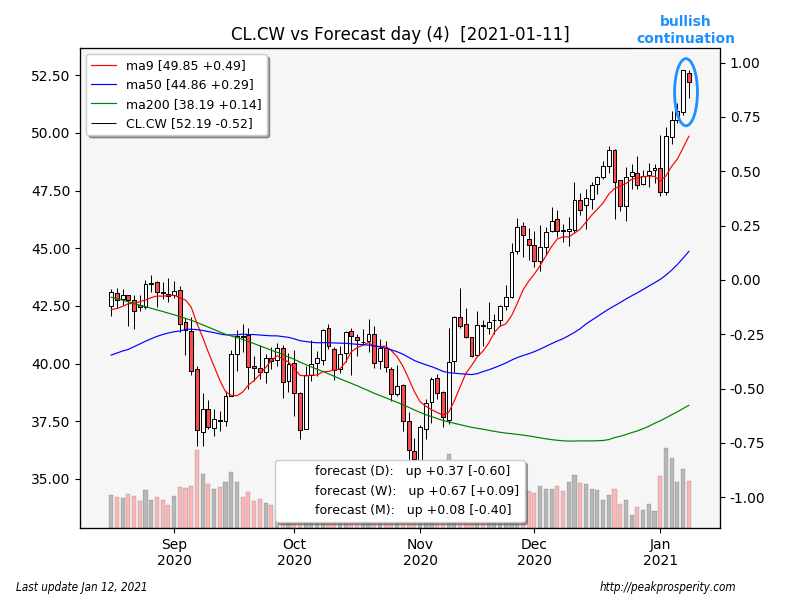 Most of the losses took place in the futures markets overnight. This was not a bearish reversal – at least not yet. 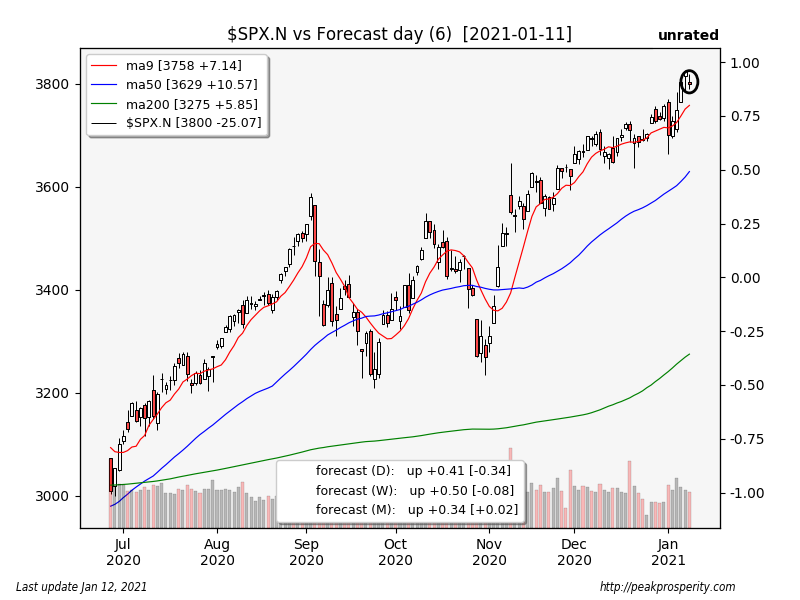 TLT moved down -0.17%. The bullish doji star candle was a bearish continuation, forecaster climbed, but remains in a downtrend. TLT is in a downtrend in both the daily and weekly timeframes. The 30-Year yield rose +1.0 bp to +1.88%.

TY dropped -0.23%. The closing black marubozu candle was a bearish continuation, forecaster climbed, but remains in a downtrend. TY is in a downtrend in all three timeframes. The 10-Year yield rose +2.0 bp to +1.15%.

Bonds just continue to fall. No sign of a low for Treasurys. My guess: the well-connected banksters have some idea of what is coming, and they are front-running it. 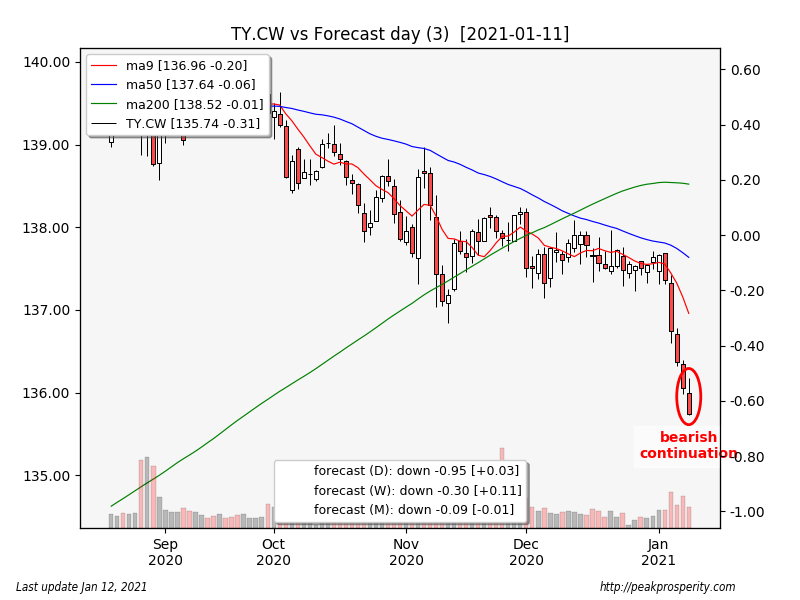 JNK dropped -0.54%. The closing black marubozu candle was a bearish continuation, forecaster fell, dropping into a downtrend. JNK is in a downtrend in both the daily and weekly timeframes.

Well this looks unpleasant – crappy debt closed below the 9 MA, and is now in a downtrend. That was quick. 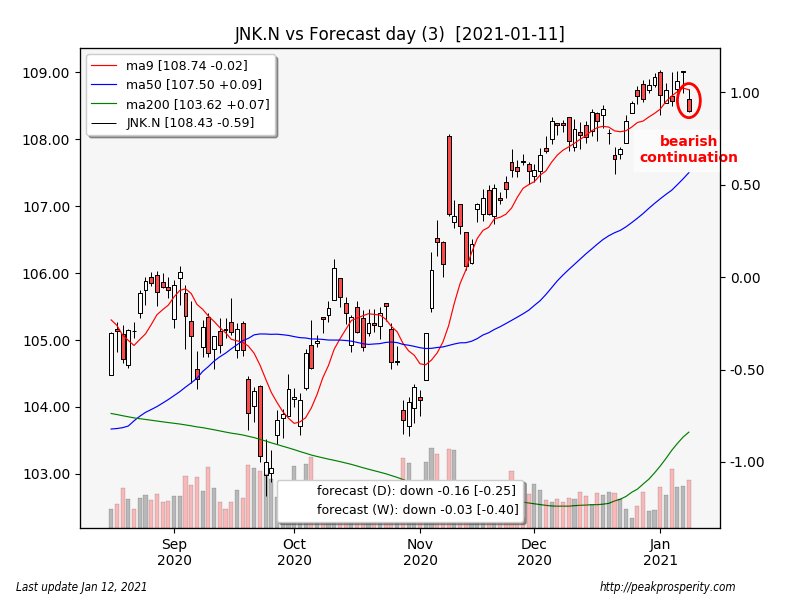 The GLD ETF tonnage on hand dropped -0.40 tons, with 1182 tons remaining in inventory.

What’s more, the sharp rise in the buck today means that gold’s modest move lower was entirely a currency effect.

Risk assets didn’t look very good; SPX fell as did crude, while crappy debt and copper both printed bearish reversals. W
as this really about “corona virus cases in China”, or was it something else?

Bonds continued lower; all that money pouring into the buck didn’t end up at the long end of the Treasury curve, nor did it flow into equities. That really just leaves cash as the destination for that foreign money.

The tech oligarchs did poorly today, especially TWTR which plunged -6.41%, after deciding to kick the Bad Orange Man off the platform for saying things that the company didn’t like. In fact, there was an organized effort among the Tech Monopolies to get rid of their competition – feeble though it was – starting with red-headed stepchild Parler. They did this by eliminating the Parler app from the Apple and Google app stores, and by Amazon AWS turning off the Parler-AWS cloud servers, and by all other cloud server operators then refusing to host Parler content on their servers.

So faced with this very effective competition suppression effort, what can Parler do?

Parler will have to buy their own servers, and install them in co-location sites the old fashioned way. [I’ve done this – its not the end of the world, but the hardware takes time to order, set up, and install – perhaps weeks. Its what we all did in the old days.]

You see where this is going, right?

The takeaway: it shows that the Biden Donors utterly control the tech space, and that they are extrordinarily terrified of Trump and his voters. One doesn’t engage in this level of (risky, and organized) suppression of competition if something is just no big deal.

Whatever the Biden Donors have in mind for the upcoming administration, they are determined to suppress any opposition to it in advance. They think the suppression is required for the project, whatever it is, to succeed.

This doesn’t bode well for a “return to normal” for America, now does it?

Hey DF, check out these charts from Sentimentrader.com: 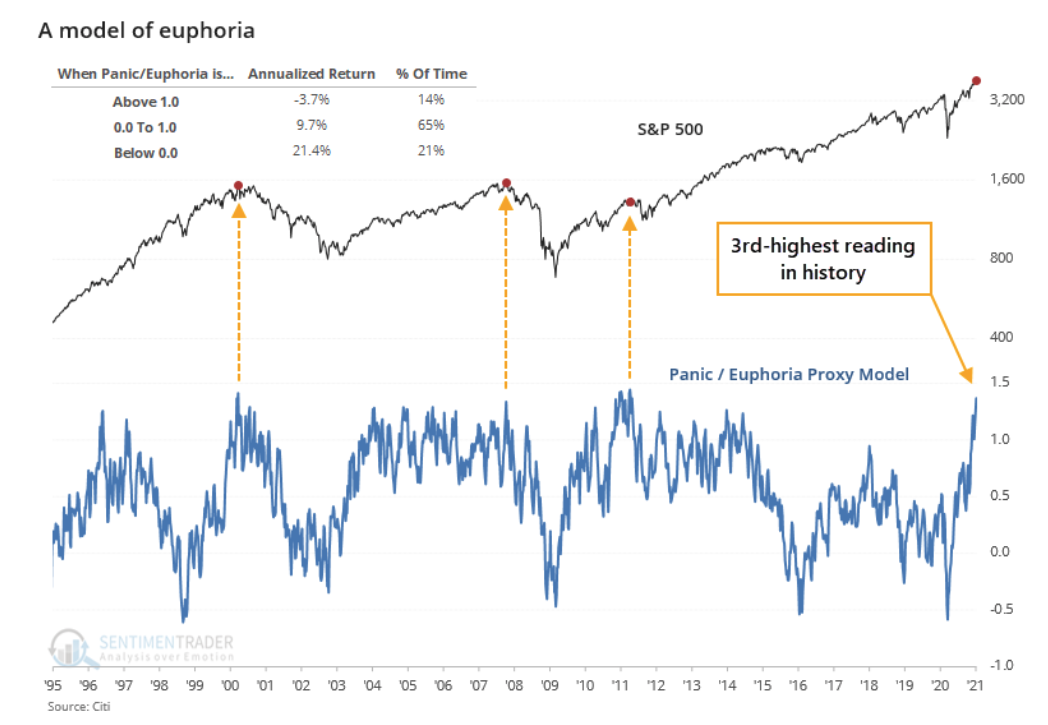 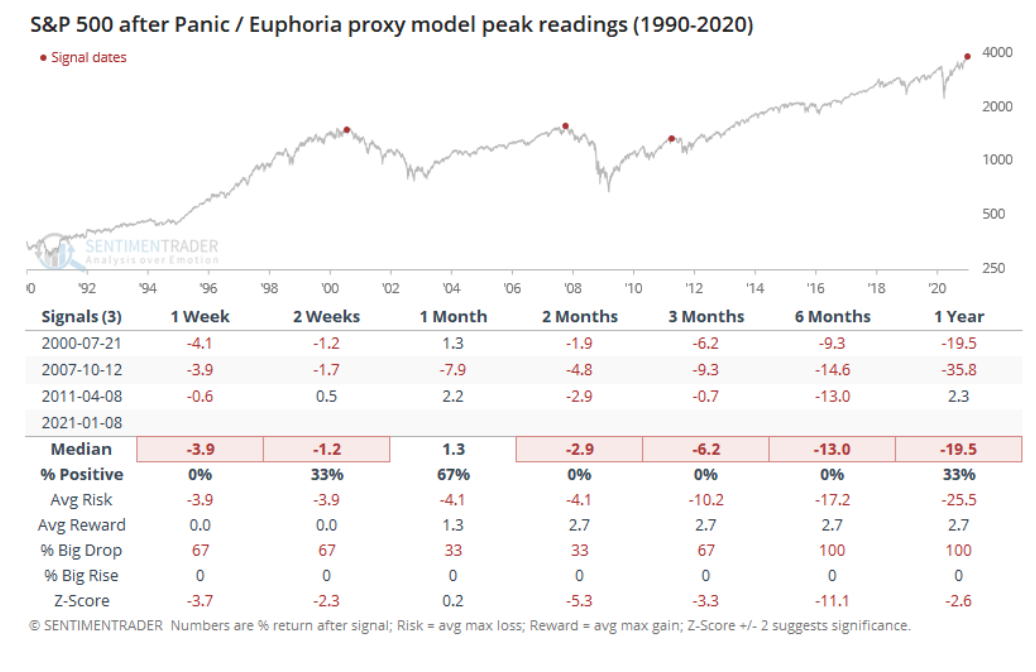 This is Sentimentrader.com’s proxy indicator for Citigroup’s Panic / Euphoria Model which looks like this: 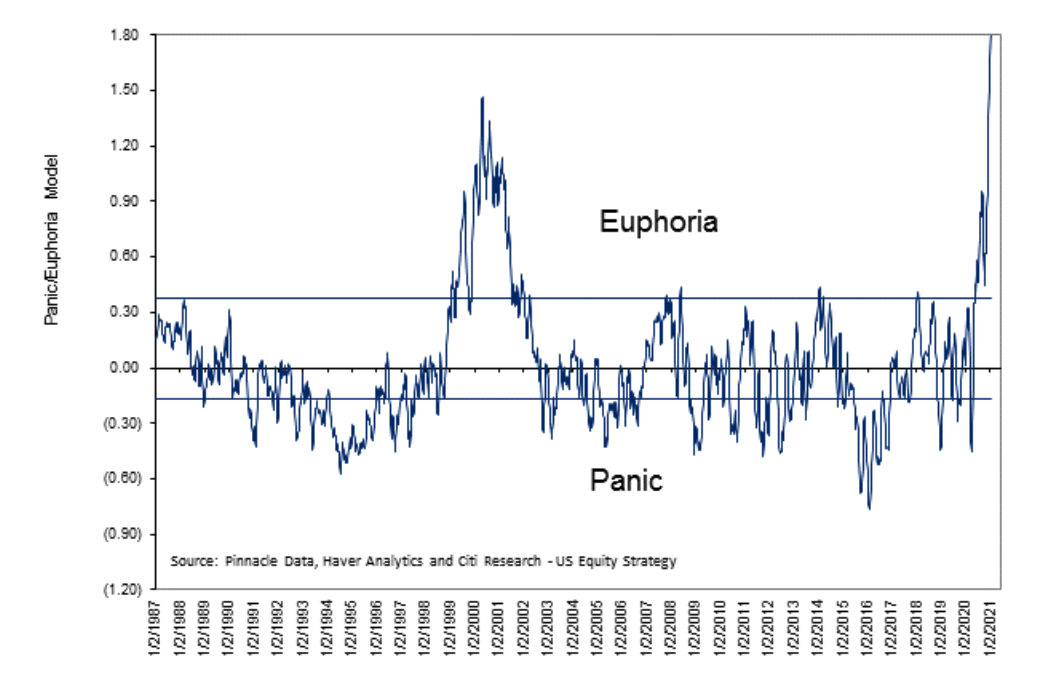 I get giddy when the Herd gets giddy to such an extreme because we know what is coming next….PANIC!

I’m trying to remember the SI charts.  That one seemed to be a pretty good one.

It looks like late December saw a decline in Small Trader Call Option Buying and a corresponding increase in Put Buying: 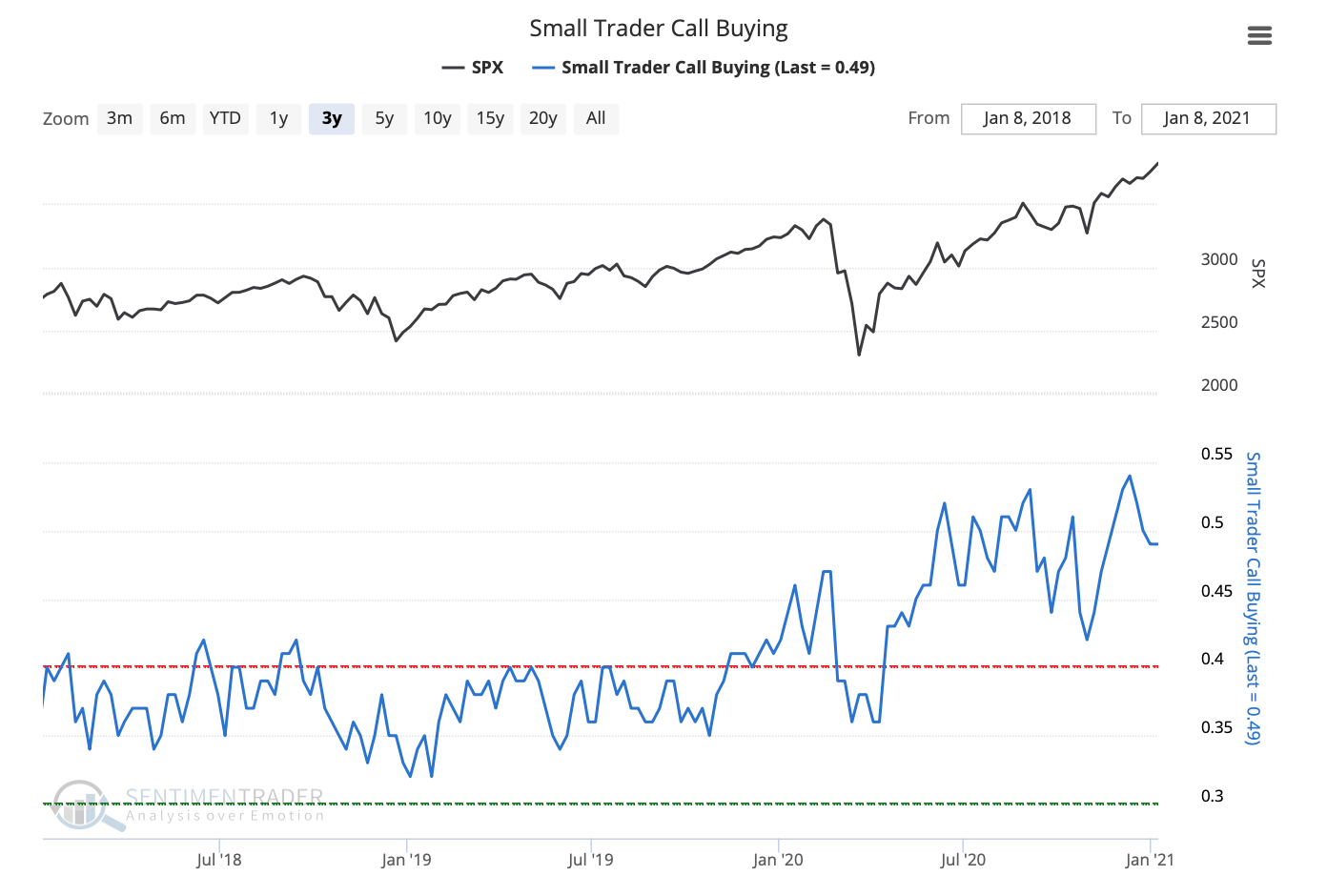 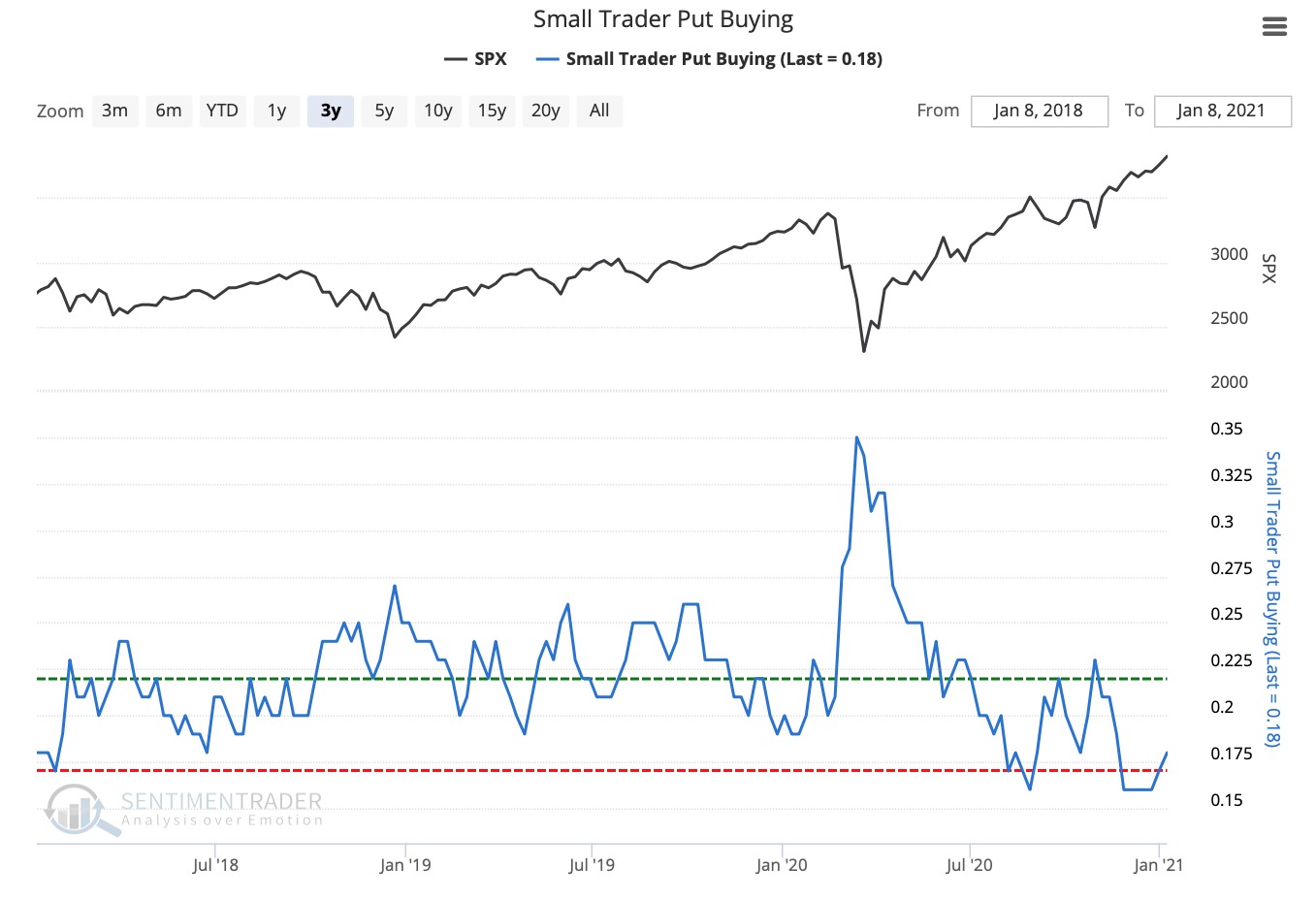 And the retail-only put/call ratio reflects the same activity: 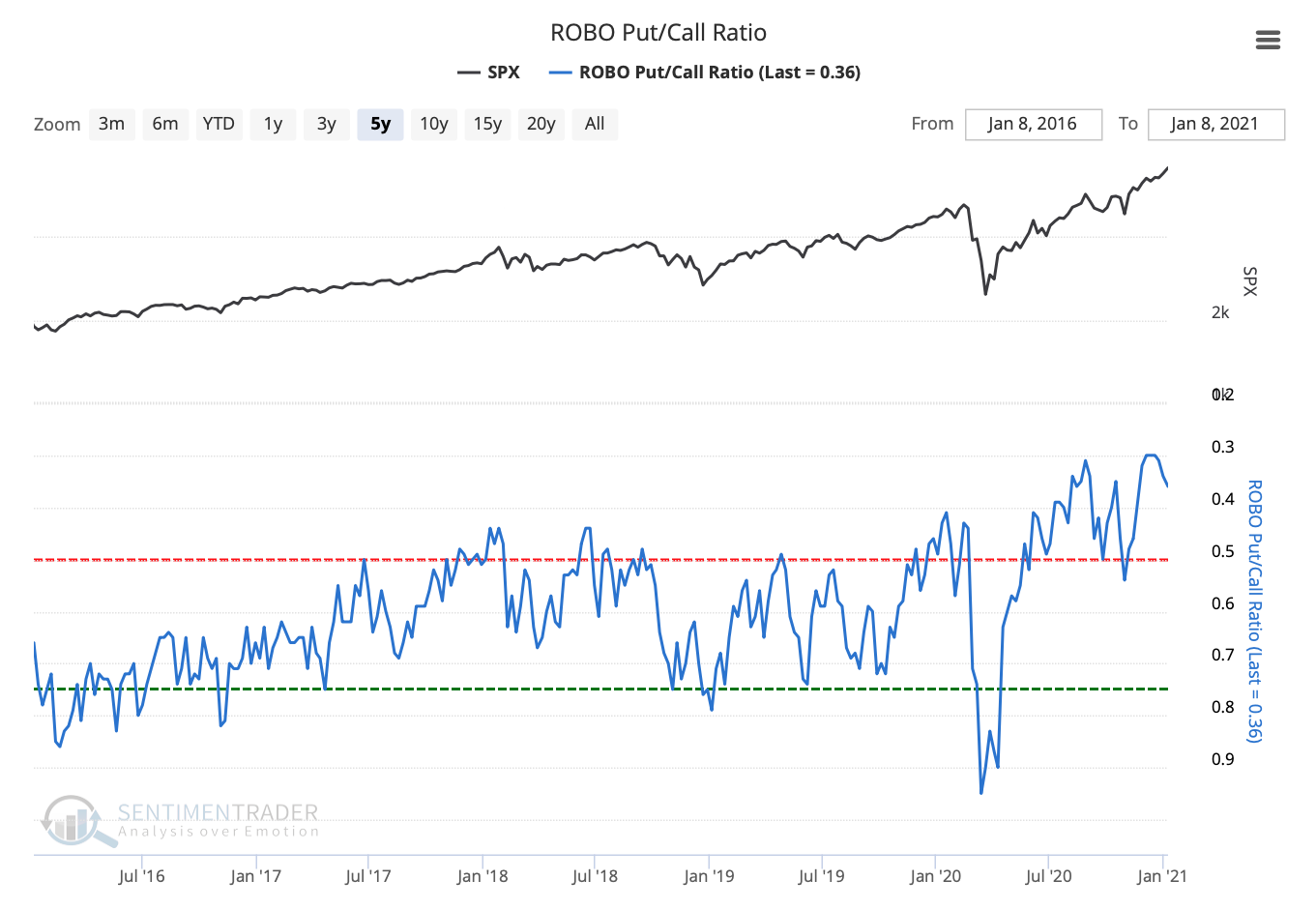 I think you could say that the signal is baked in for these extreme sentiment readings at this point, but I suspect we will see a double peak in these indicators like we saw last year before the big crash.

Hey what are you thinking with gold?

I think it’s also signaling a crash coming, but the question is will it also decline with the markets or will the market front-run the expected Fed response and so the price action will be good for gold during the crash?

I may be a fool, but I think the later scenario has real potential, especially since gold has been so weak these last few months.

I’m trying to decide whether to put my bitcoin portfolio into digital gold. It’s just sitting in stablecoins right now except for a small allocation to LINK.

Or should I wait?

Thanks for your feedback.

Sorry to ping you again DF, but I think it’s important.

I think there is a real chance of some form of civil war beginning in a week’s time. Putting aside the potential seriousness of the situation, everything seems to be screaming ‘buy gold here!’

I realize that you can’t provide a direct answer to my question but I’m just looking for a discussion.

I don’t think the civil war will start next week.  There’s a lot of talk out there about demonstrations with long guns, but the sense I get – that’s just an attempt by the gang in charge to generate a false flag using the Antifa brownshirts as APs.  The gang hopes to use this event to crack down on Trump supporters because – domestic terrorism 9/11 patriot act “to save the country.”

You know, like when people dressed in costume destroy entire city blocks, set things afire, beat up cops, shoot people, are let out of jail, are never prosecuted, and this happens for weeks on end.  That sort of terrorism.

A civil war might break out if the gang in charge decide to seize firearms.  That could happen.  But I don’t think next week is the schedule for that.

And by “looked at very hard” I mean it might turn into a bit of a donnybrook.

That’s the only civil war I see breaking out in the near term.

I think there is a real chance of some form of civil war beginning in a week’s time. Putting aside the potential seriousness of the situation, everything seems to be screaming ‘buy gold here!’

I realize that you can’t provide a direct answer to my question but I’m just looking for a discussion.

I think Dave may have misunderstood you. You want to discuss how to invest if a civil war is going to happen. You aren’t really interested in the civil war for other reasons are you? Correct me if I’m wrong.

It is ridiculous statements like that which guarantee more violence ahead. I can’t fathom how any thinking person with two eyes can believe such bullsh*t.

Maybe if you actually lived in our country and had to deal with the future consequences of repeating lies and hatred everyday, you might think twice before doing so.

F*cking politics turns everyone into idiots.

All I asked was your opinion on gold and I get a denial about the obvious social unrest going on. Add that to 9 months of denial about a global pandemic, and I have to seriously question your ability to see past your hatred, Dave.

Why can’t your work offer something of value? What does anyone gain from reading your political nonsense except more hatred, a false sense of superiority, and dead children?

I sold Amazon yesterday….out of protest. Considering buying more PM ….would you recommend CEF….or miners? Or some other vehicle?