Gold fell in the Asia session, making a new low to 1541, then bounced back, regaining most of its losses by the close. Even so, the the swing high candle was a likely bearish reversal (62%), forecaster dropped, moving deeper into its downtrend. However even with the recent declines, gold remains in an uptrend in the weekly and monthly timeframes.

Futures are now projecting an 11% chance of one rate increase at the Jan 2020 meeting. 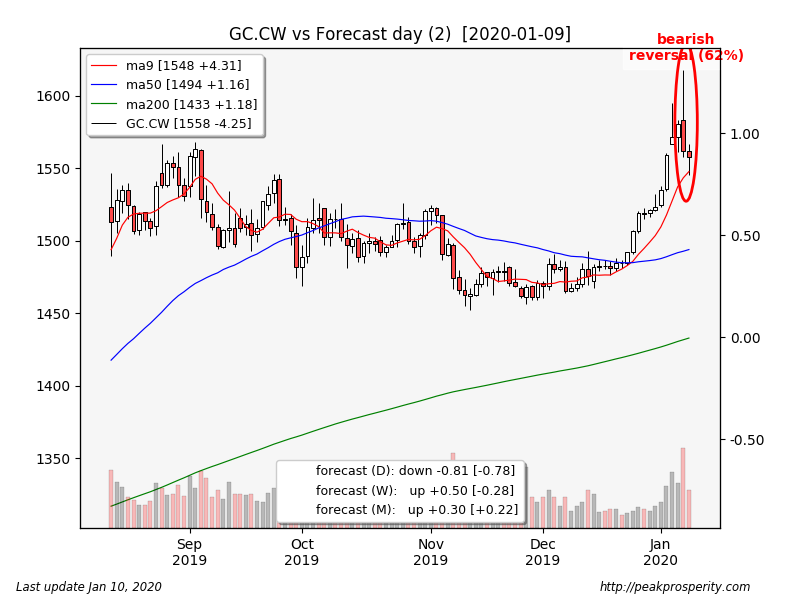 Silver also fell in Asia, but silver’s rebound was much weaker.  Like gold, silver printed a swing high candle pattern which was also a probable bearish reversal (57%), forecaster dropped, moving into a downtrend. Silver remains in an uptrend in the weekly and monthly timeframes.

COMEX SI open interest rose +149 contracts. Current open interest for SI: 135% of global annual production, up +0.09% today. That’s not much of a change for silver OI either. 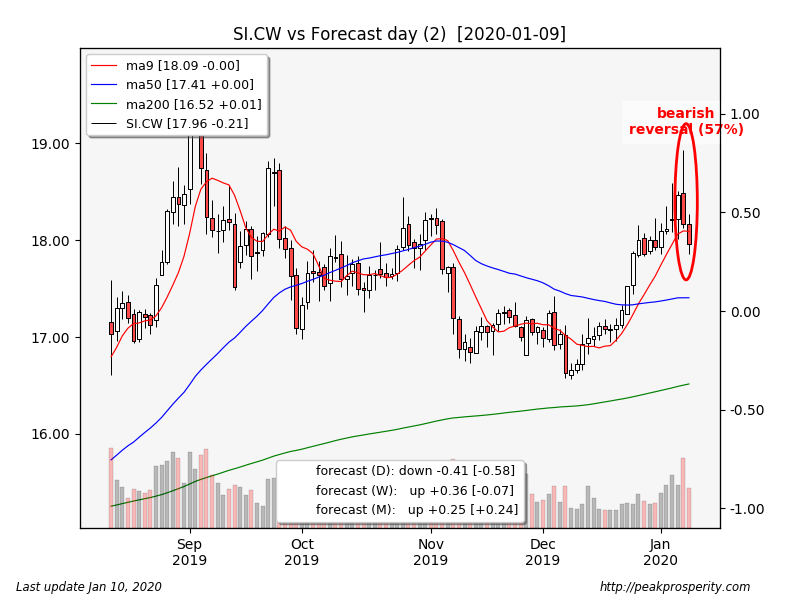 The miners gapped down at the open, tried to rally in the first 30 minutes which then failed, and ended the day near the lows. GDX dropped -1.09% on moderately heavy volume, and GDXJ fell -1.49% on moderate volume. XAU moved dropped -1.16%, the short black candle was a bearish continuation, forecaster climbed, but remains in a downtrend. XAU remains in an uptrend in the monthly timeframe, but the weekly has dropped to no-trend. 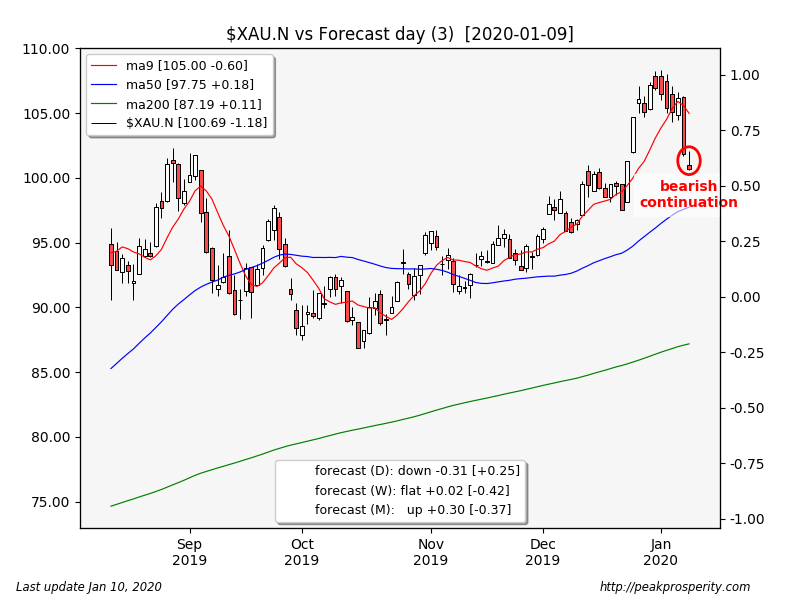 The buck rose +0.16 [+0.17%] to 97.05 on moderately light volume. The long white candle was a bullish continuation, and forecaster climbed, moving higher into its uptrend. The buck is in an uptrend in the daily and monthly timeframes. DX is approaching the 50 MA resistance – perhaps tomorrow we will see how that plays out.

Crude fell -0.32 [-0.54%] to 59.44 on heavy volume. The hammer candle was a bearish continuation, forecaster climbed, but remains in a downtrend. Crude is in a downtrend in the daily and weekly timeframes.

SPX rallied +21.65 [+0.67%] to 3274.70 on moderate volume. The short white candle was a bullish continuation, forecaster moved lower, but remains in an uptrend. That’s another new all time high for SPX, which is in an uptrend in all three timeframes.

TLT moved higher [+0.35%]. The thrusting candle pattern was a probable bullish reversal (50%), but forecaster dropped, moving deeper into its downtrend. TLT is in an uptrend in the weekly timeframe. The 30-Year yield fell -2.0 bp to +2.33%.

TY moved up too [+0.09%]. The short white candle was a bearish continuation, but forecaster fell, dropping into a downtrend. TY is in a downtrend in the daily and monthly timeframes. The 10-Year yield fell -1.0 bp to +1.86%.

JNK moved higher [+0.23%]. The spinning top candle was neutral, and forecaster climbed, rising into an uptrend. JNK is now in an uptrend in the daily and weekly timeframes. Today marks a new 2-year high for JNK.

Today was Fed Balance Sheet Update Day: 4,149.5B, -24.1B (-0.58% w/w). Wow!! The balance sheet actually declined substantially this week, as the Fed withdrew some of its money printing. That’s good news for the financial system, it would seem. Perhaps this accounts for the rally in JNK – to new 2 year highs.

So with World War 3 now past – presumably – my focus goes back to the Fed’s balance sheet. This week’s $24 billion dollar decline in the balance sheet was the largest so far since the blastoff started back last September. Wolf Richter has the details, executive summary: big repo declines, offset by a moderate 1-year treasury increase.

Right, so first no WW3, and then $400 billion in new money seems as though it might have been enough to plaster over the still-unexplained issue with the financial system. Possibly. For now.

This is likely bearish for PM. While the longer term forecasters continue to point higher, the dailys for both metals are projecting a pretty brisk short term decline, and the swing high patterns look fairly ugly.

Of course we still have the payrolls report tomorrow, and that could move prices around. 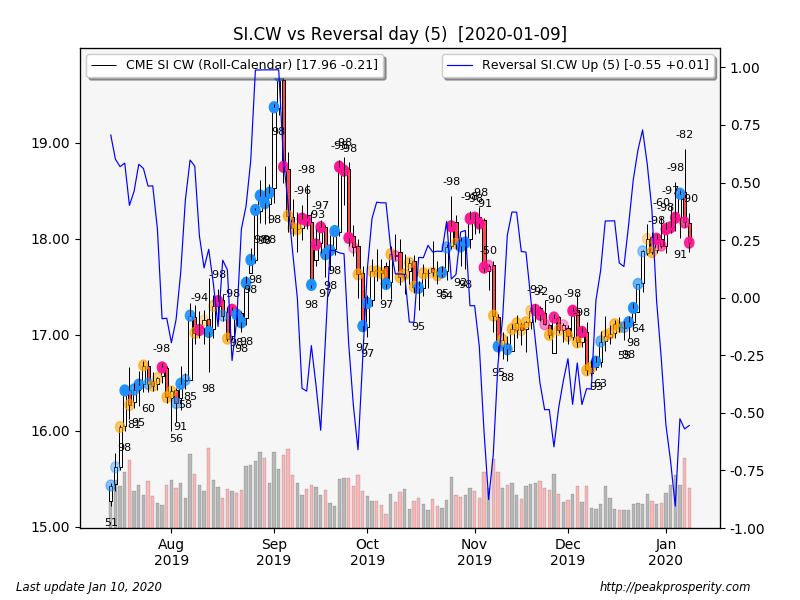 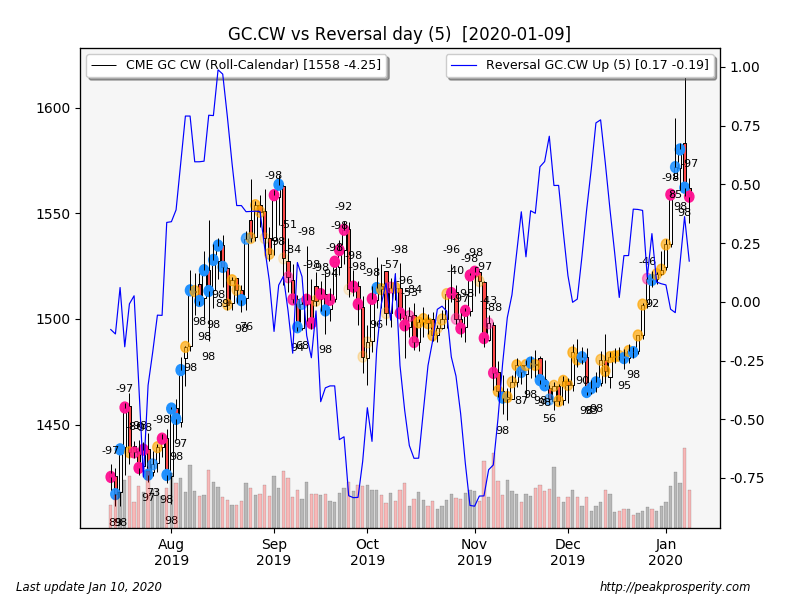 Thanks for the great daily commentaries.

I note that your figures on the Fed balance sheet are at odds with the figures on my (almost) daily updates from Grants Interest Rate Observer. See their update for 9th Jan here.

Any thoughts on why this would be?

Hmm.  Dunno.  I download my data straight from the Fed itself.