After market close yesterday, Iran launched 15 missiles at a pair of bases inside Iraq. This news caused an immediate spike higher in gold, silver, and crude oil. However, Iraq’s Foreign Minister then announced in a tweet that the response had concluded, hinting that the missile attack (which was later found to have caused no US casualties) was the entirety of Iran’s response to the US drone strike that killed their general. All those gains then turned into losses.

Gold spiked higher on the news of the missile strike, then reversed as it became clear the strike would (probably) not lead to a larger conflict. The long black candle was a reasonably strong bearish reversal (43%) and forecaster dropped hard, moving into a slight downtrend. Gold remains in an uptrend in the weekly and monthly timeframes.

Futures are now projecting a 9% chance of one rate increase at the Jan 2020 meeting. 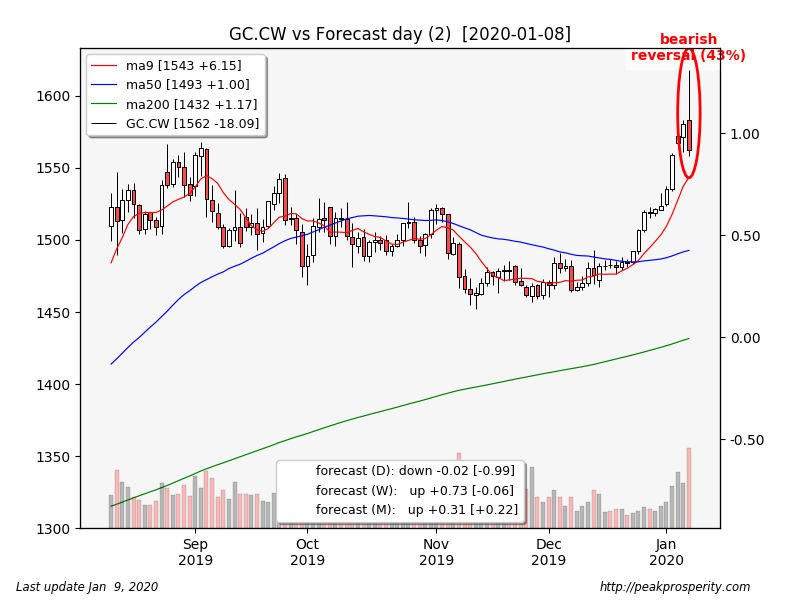 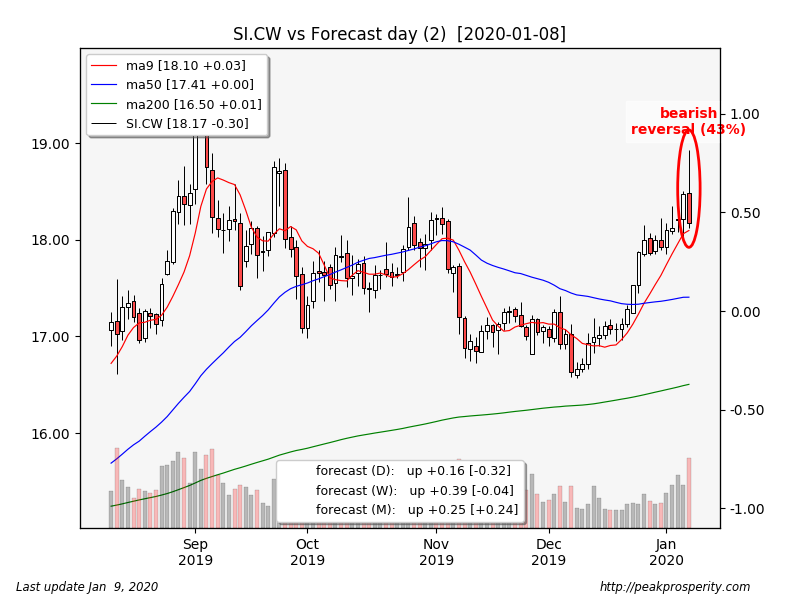 Miners gapped down at the open, and sold off for most of the day, with a small rally into the close. GDX dropped -3.90% on extremely heavy volume, and GDXJ plunged -4.24% on extremely heavy volume also. XAU fell -4.09%, the black marubozu candle was a bearish continuation and forecaster dropped, moving deeper into its downtrend. Today’s plunge took XAU through the 9 MA, which is bearish.  XAU remains in an uptrend in the weekly and monthly timeframes.

Tomorrow will be important – to see if the dip-buyers appear as we move down towards the recent breakout point, or if the selling pressure in the miners continues. 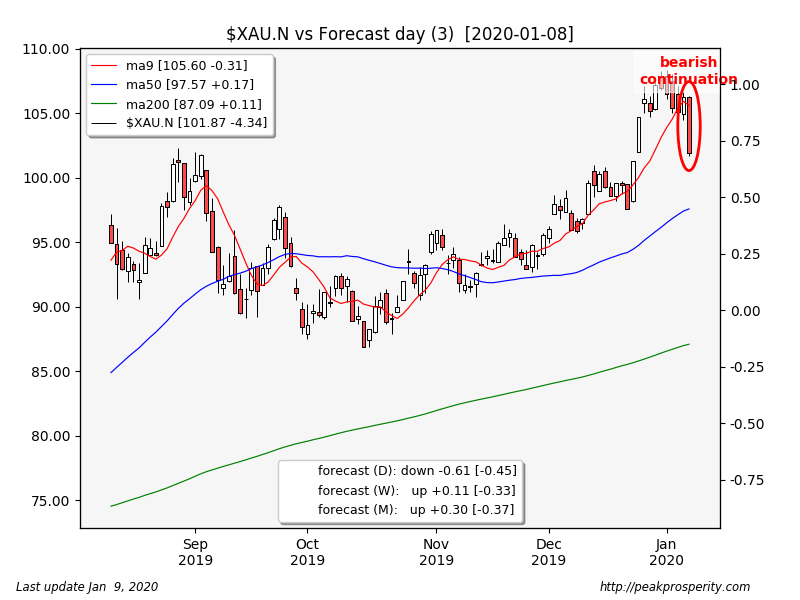 The buck rallied slowly all day long – the threat of peace breaking out did not seem to deter the dollar’s rally. The buck rose +0.29 [+0.30%] to 96.89 on moderate volume. The long white candle was a bullish continuation, forecaster was unchanged and remains in an uptrend. The buck is in an uptrend in the daily and monthly timeframes.

The buck has rallied fairly strongly in the past week or so; we will have to see what it does when it gets back up to the 50 MA, which seems to be acting as resistance right now. 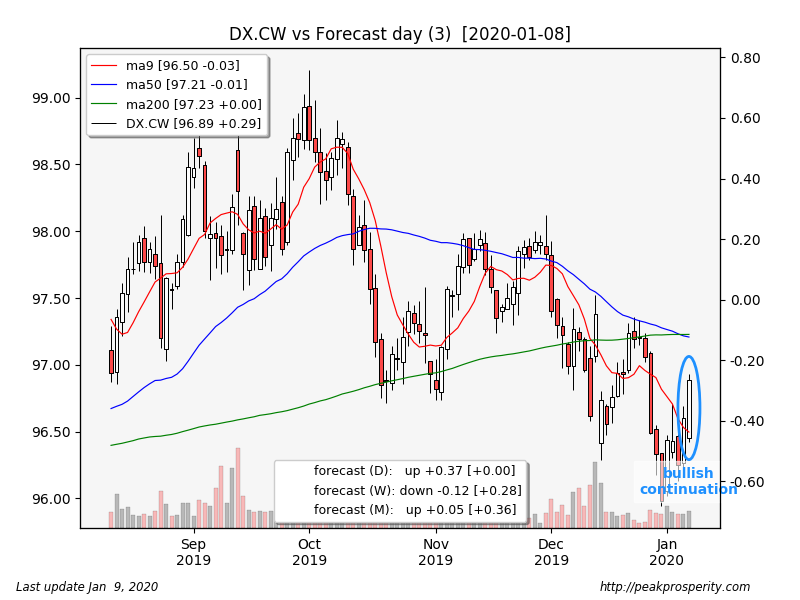 Crude first rallied following the missile attack, then reversed along with gold and silver. Crude ended the day down -2.66 [-4.26%] to 59.76 on extremely heavy volume. The massive strong line candle was a likely bearish reversal (63%), forecaster fell, dropping into a downtrend. Crude is now in a downtrend in the daily and weekly timeframes.

It really was an amazing reversal bar – 3 weeks worth of rally, erased in a single day. 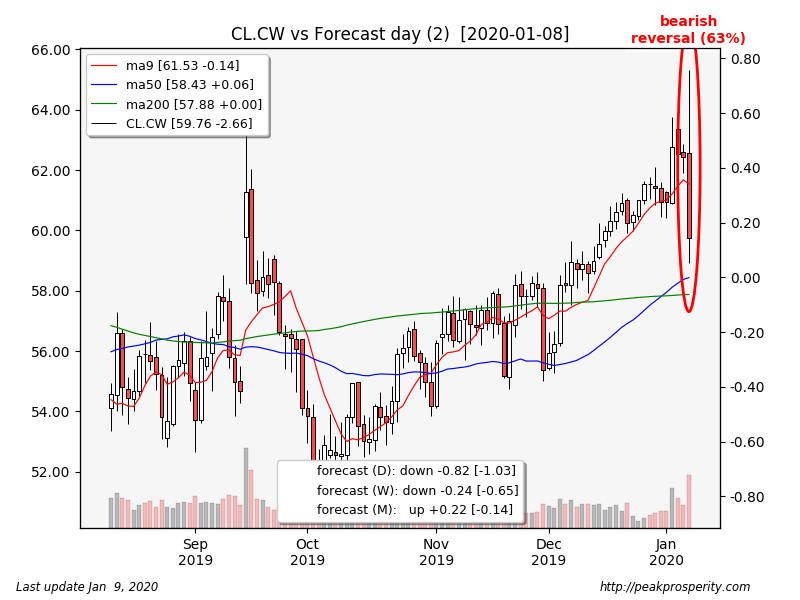 SPX was hit hard following the missile attack in the futures markets, but recovered relatively quickly once details of the strike emerged. SPX ended up +15.87 [+0.49%] to 3253.05 on moderate volume. Today marked another new all time high – but not a new closing high. The long white candle was neutral, forecaster climbed, moving higher into its uptrend. SPX remains in an uptrend in all three timeframes.

TLT fell [-0.66%]. The long black candle was a possible bullish reversal (36%), forecaster dropped, moving deeper into its downtrend. TLT is in a downtrend in the daily, and an uptrend in the weekly timeframe. The 30-Year yield rose +5.0 bp to +2.36%.

JNK moved higher [+0.08%], the spinning top candle was neutral, and forecaster dropped, moving deeper into its downtrend. JNK is in a downtrend in the daily, but an uptrend in the weekly timeframe.

My guess is – probably not, at least not longer term anyway. It wasn’t Iran that drove the metals higher over the few weeks prior. Certainly the recent breakout (and today’s subsequent retracement) was caused by news, but my guess is, the cause of the PM rally (whatever it is) probably remains in place.

Once talk of “World War 3” dies down, we will go back to thinking about Not-QE, and all the rest.

And speaking of that – tomorrow is Fed Balance Sheet Update day, and on Friday, we get Nonfarm Payrolls. Either of those two events could move prices around.

Silver model still looks unhappy.  But an odd thing happened – looks like a value changed underneath the model from 2 days ago.  Not sure what that’s about.  Some timeseries from the Fed aren’t updated every day, so I need to scrape the data from a page at “roughly” the same time the Fed allegedly collects said data.  Perhaps that process is imperfect. 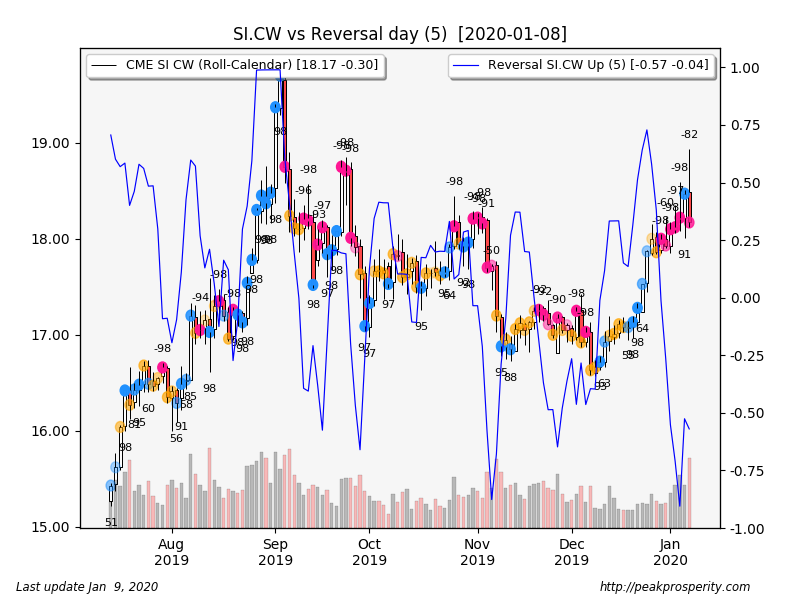