Gold moved steadily higher for most of the day, closing at the highs. The spinning top candle was a bullish continuation, and forecaster fell, but remains in an uptrend. Gold is in an uptrend in all three timeframes.  Today marked a new 6-year closing high for gold.

Futures are now projecting an 8% chance of one rate increase at the Jan 2020 meeting. 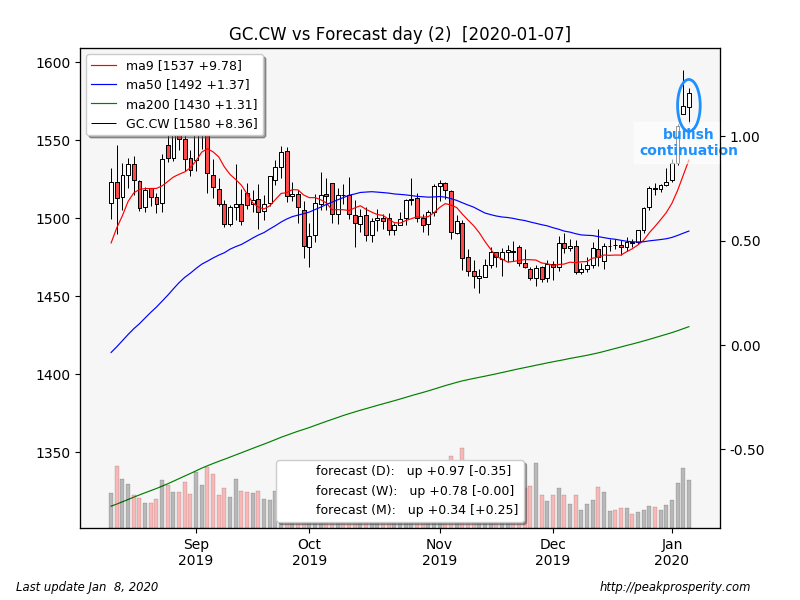 Silver fell slightly in Asia, and then spent the remainder of the day rallying, closing quite near the highs. The long white candle was a bullish continuation, and forecaster dropped, but remains in an uptrend. Silver is in an uptrend in all three timeframes. Today was a new 3-month closing high for silver, which is a positive sign. 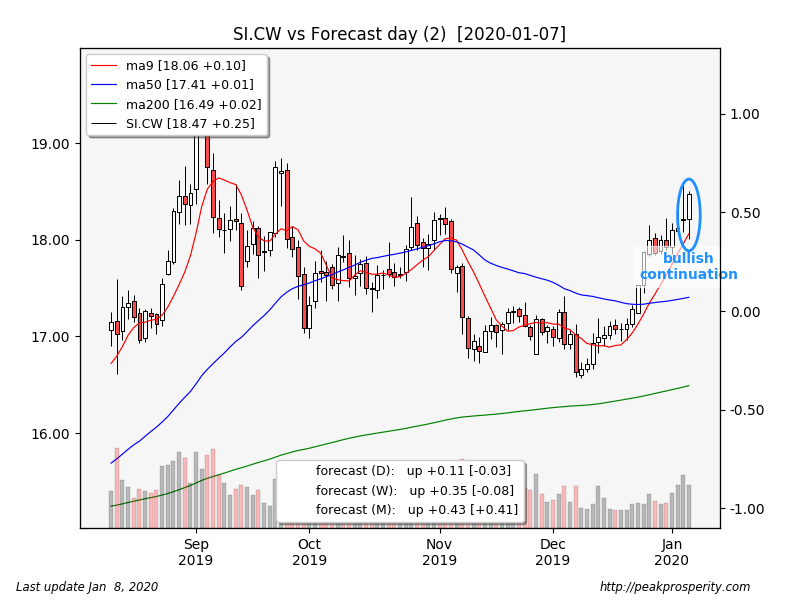 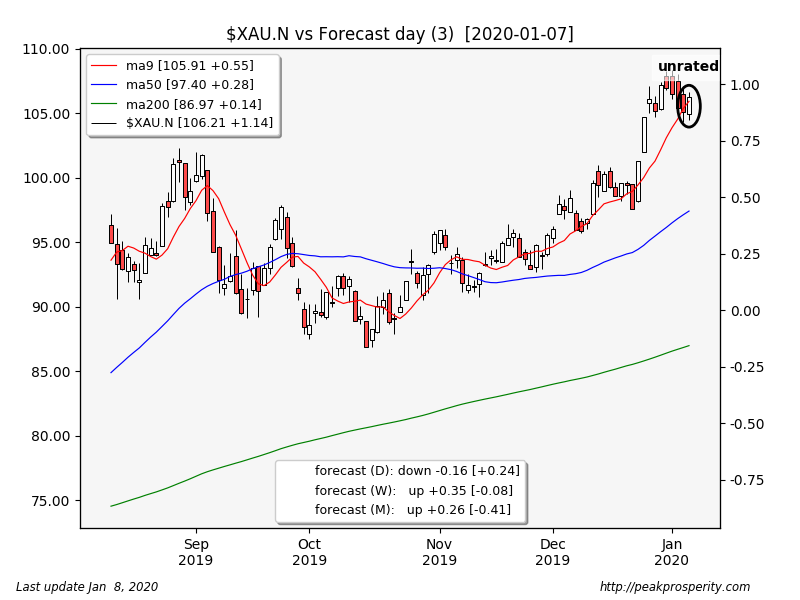 The buck jumped +0.35 [+0.36%] to 96.60 on moderately light volume. The long white candle was a bullish continuation, forecaster climbed, rising into an uptrend. The buck is now in an uptrend in the daily and monthly timeframes. 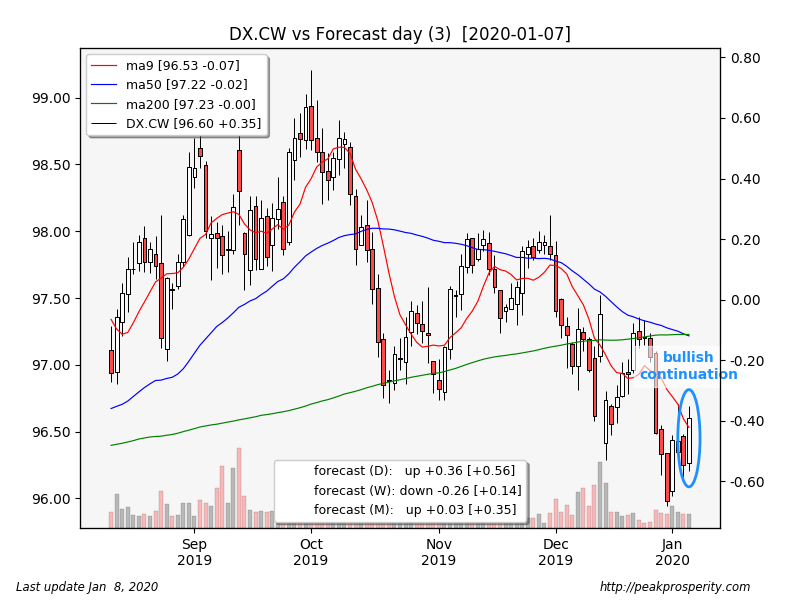 Crude dropped -0.10 [-0.16%] to 62.42 on moderately heavy volume. The long black candle was a bullish continuation, and forecaster dropped, but remains in an uptrend. Crude is in an uptrend in all three timeframes. 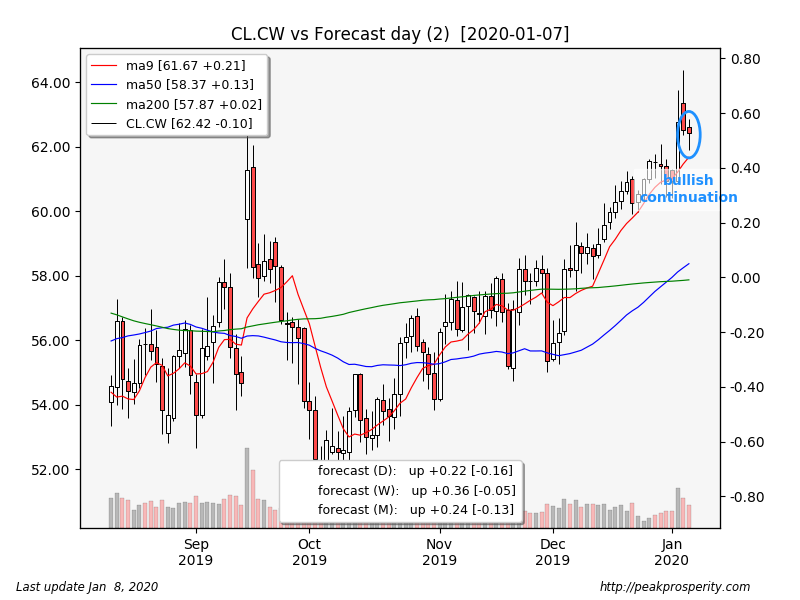 SPX fell -9.10 [-0.28%] to 3237.18 on moderate volume. The bearish harami candle was a possible bearish reversal (35%), but forecaster climbed, moving higher into its uptrend. SPX is in an uptrend in all three timeframes.

JNK moved down [-0.07%]. The short black candle was a bullish continuation and forecaster dropped, moving deeper into its downtrend. JNK is in a downtrend in the daily timeframe.

The market-hours moves in gold and silver were positive; candle prints were bullish, forecasters are all pointing higher, and even the miners managed to show some strength. It was a reasonably positive trading day for PM, even though the buck rallied fairly sharply.  Gold/euros looked really good as a result.

Gold OI was once again not a factor in today’s price moves.  There does not seem to be any official intervention at this time, assuming we can trust the data from the CME.

Almost immediately after market close, Iran launched 15 missiles at a couple of Iraqi airbases where US soldiers were stationed. Early reports suggest there were no US casualties. The news caused gold to jump $35 (to $1613), and silver shot up 48 cents (to $18.89), while crude rose almost $3 (to $65.65). The metals have retreated from the highs since then, as has crude, although both gold and silver have retained much of their gains.

“Iran took & concluded proportionate measures in self-defense under Article 51 of UN Charter targeting base from which cowardly armed attack against our citizens & senior officials were launched.”

Perhaps that word “concluded” is what caused the reversal back down in crude.

So is this it? Only time will tell.

We remain in a news driven market.