The market-moving news of the day was the “Stop the Steal” march on Washington, which ended with a kerfuffle at Capitol Hill in which an unarmed air force veteran was shot and killed apparently by a Capitol Hill policeman. Who started the kerfuffle? Were they BLM/Antifa agitators? Or were they Trump supporters fed up with the judicial stonewalling? As with the Civil Rights movement back in the 60s, it is impossible to say, especially from a distance.

The day ended with the Senate dutifully confirming the election of Biden. The Bad Orange Man promised an orderly transition after the certification took place. Just like Hitler did.

Gold mostly chopped sideways in Asia, then started to fall during London, finally making the day low around 11 am in New York. Gold then rebounded somewhat in the afternoon, closing off the lows. The long black candle was a possible bearish reversal (31%), forecaster fell, dropping into a downtrend. Gold remains in an uptrend in the weekly and monthly timeframes.

Gold/euros plunged -27.17 [-1.71%] to 1563.76 on extremely heavy volume. The long black candle was a possible bullish reversal (33%), forecaster fell, dropping into a downtrend. Gold/euros is in an uptrend in the weekly and monthly timeframes.

Today’s unpleasant-looking candle was just mildly bearish, but daily forecaster was unhappy about the price action. Longer term, gold remains in a reasonably strong uptrend. Is this just a one-day affair? Gold remains above all 3 moving averages. At least some of today’s drop was currency-related. 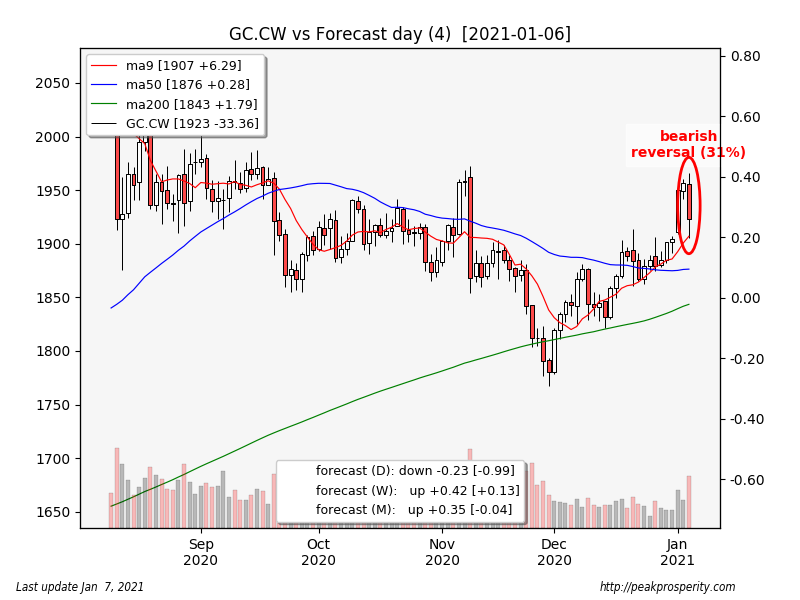 Silver fell in Asia, rallied in London until about 7 am, whereupon it plunged along with gold, putting in the day low at roughly 11:05 am, after which it rebounded during the remainder of the day. The dark cloud cover candle was a reasonably strong bearish reversal (43%), forecaster dropped, but remains in an uptrend. Silver is in an uptrend in all three timeframes.

In spite of the moderately-bearish candle print, silver actually did fairly well today. It remains well above its 9 MA, and just looking at the chart, it seems to have lost very little ground on today’s correction. It also outperformed gold, which is a positive sign. 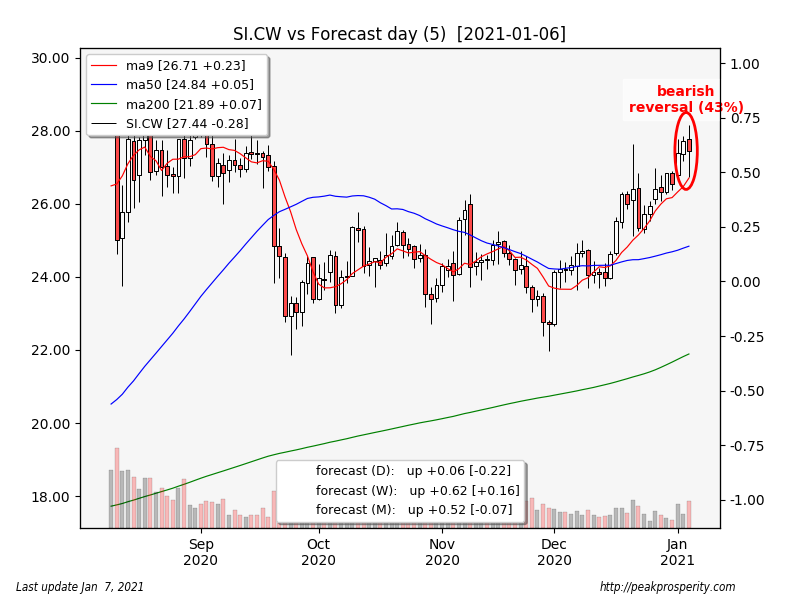 The miners gapped down at the open, rallied in the first 30 minutes, fell for the next hour, and then rallied for the remainder of the day, erasing alll of the early losses. GDX moved down -0.10% on heavy volume, and GDXJ fell -0.60% on moderately heavy volume. XAU rose +0.68%, the closing white marubozu candle was neutral, forecaster dropped, but remains in an uptrend. XAU is in an uptrend in the daily and weekly timeframes.

Given the big plunge in gold today, and the drop in silver, the miners looked very strong. What’s that about? Given that the miners tend to lead, I’d say that’s a very healthy sign for PM overall. The miner price action today is a vote for the outcome: “today’s correction is transitory in nature.” 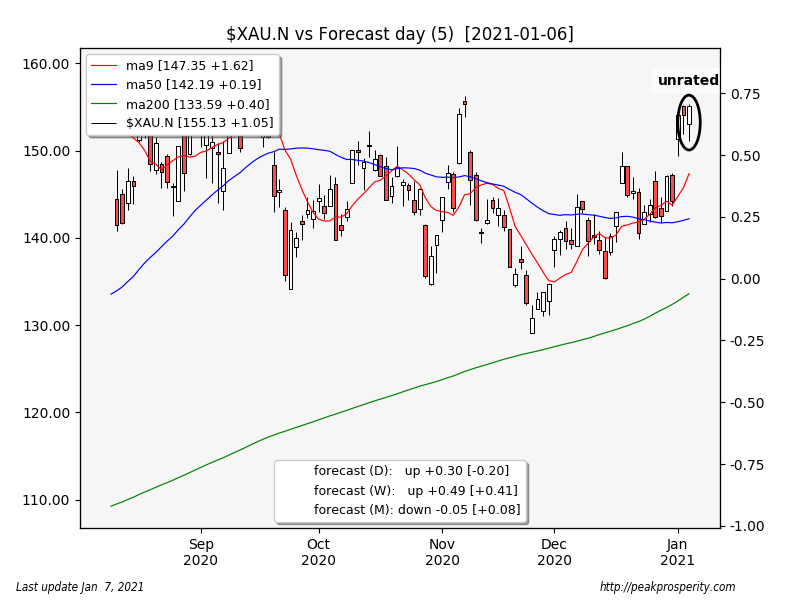 Copper inched up +0.01 [+0.27%] to 3.65 on very heavy volume. The northern doji candle was a reasonably strong bearish reversal (47%), forecaster climbed, moving higher into its uptrend. Copper is in an uptrend in the daily and monthly timeframes.

Copper was all over the map today – a rally in Asia, a plunge in London, a rebound during New York, ending almost flat on the day. The candle print was a highly rated bearish reversal pattern, but forecaster wasn’t worried. Today marked yet another new 8-year high for copper. 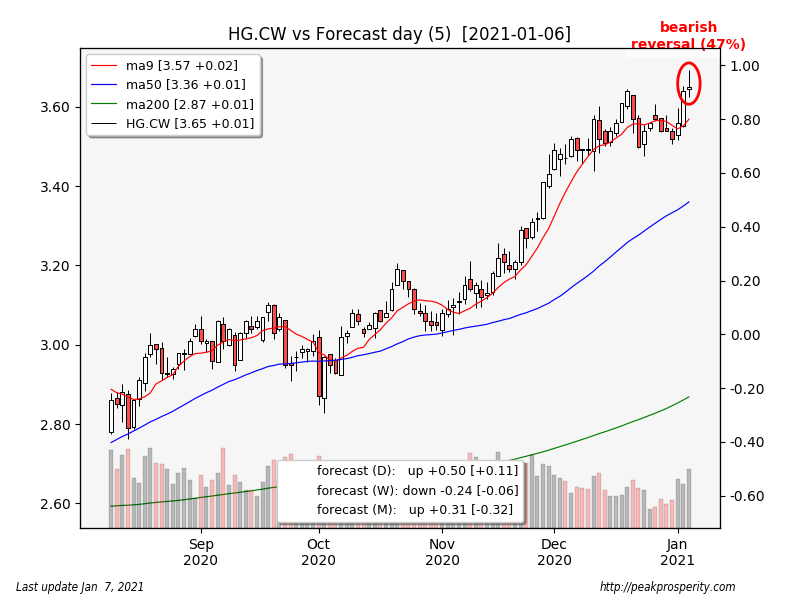 The buck climbed +0.09 [+0.10%] to 89.49 on heavy volume. The long white candle was a possible bullish reversal (30%), forecaster climbed, but remains in a downtrend. The buck is in a downtrend in both the daily and monthly timeframes.

The buck was all over the map today too, roughly mirroring silver: a plunge in Asia, then a rally in London, then another plunge during the US session. The buck did make a new 3-year low, the print was mildly bullish, and forecaster agreed, but it was not enough to flip the buck back into an uptrend. A low for the buck? Not yet. 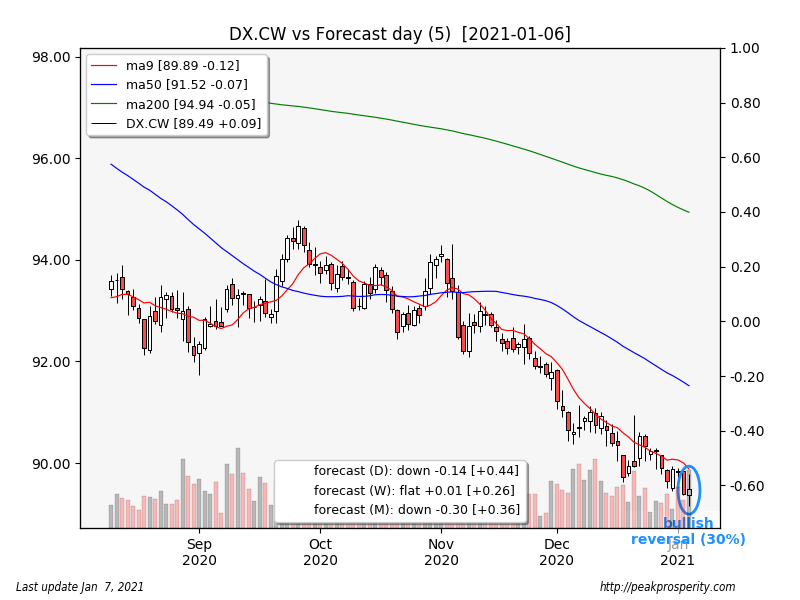 Crude rallied +0.67 [+1.34%] to 50.54 on extremely heavy volume. The long white candle was a bullish continuation, forecaster climbed, moving higher into its uptrend. Crude is in an uptrend in the daily and monthly timeframes.

Mostly crude moved higher following the EIA report, but something unpleasant happened in the afternoon (!) which caused a momentary spike lower – but the spike was rapidly retraced.

This was a new 11-month high for crude oil – and crude is now back above $50. There was great rejoicing in the energy equity space. 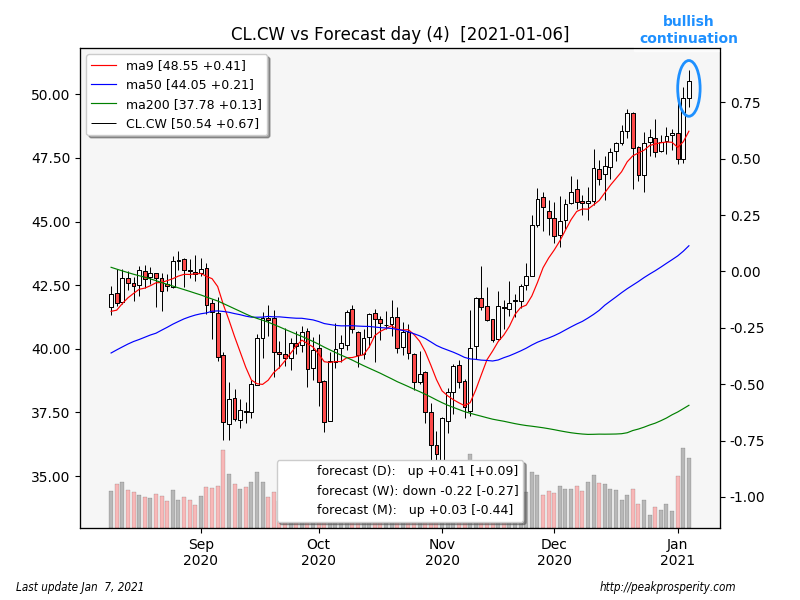 Today was a big move for the banksters. It was also another new all time high for SPX – but not a closing high; SPX could not hold onto its gains through to the close. The candle print was a very highly rated bearish reversal. Will that mean anything? I’m guessing: probably not, given the end-of-day selloff was headline-driven.

TLT plunged -2.05%. The long black candle was a possible bullish reversal (37%), forecaster dropped, moving deeper into its downtrend. TLT is in a downtrend in both the daily and weekly timeframes. The 30-Year yield rose +12.0 bp to +1.82%.

TY dropped -0.44%. The long black candle was a possible bullish reversal (39%), forecaster dropped, moving deeper into its downtrend. TY is in a downtrend in all three timeframes. The 10-Year yield rose +8.0 bp to +1.04%.

Bonds absolutely cratered today – most of the losses came in Asia and again at the open in New York. They didn’t seem tied to any particular event. The 10-year yield is now back above 1% for the first time since March. 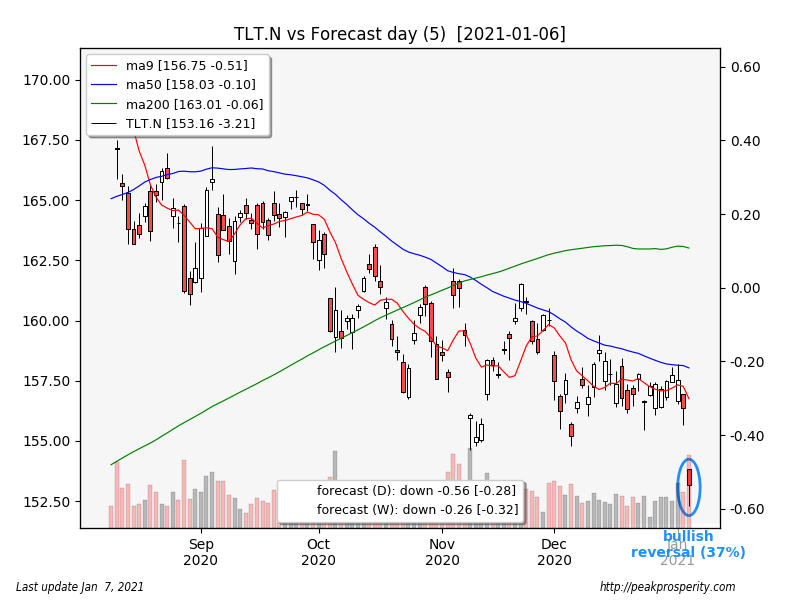 JNK fell -0.15%. The long black candle was neutral, forecaster fell, dropping into a downtrend. JNK is in an uptrend in the weekly timeframe.

Crappy debt rallied briefly in the morning, but the rally failed, and it spent the rest of the day selling off.  It looked fairly bearish to me. 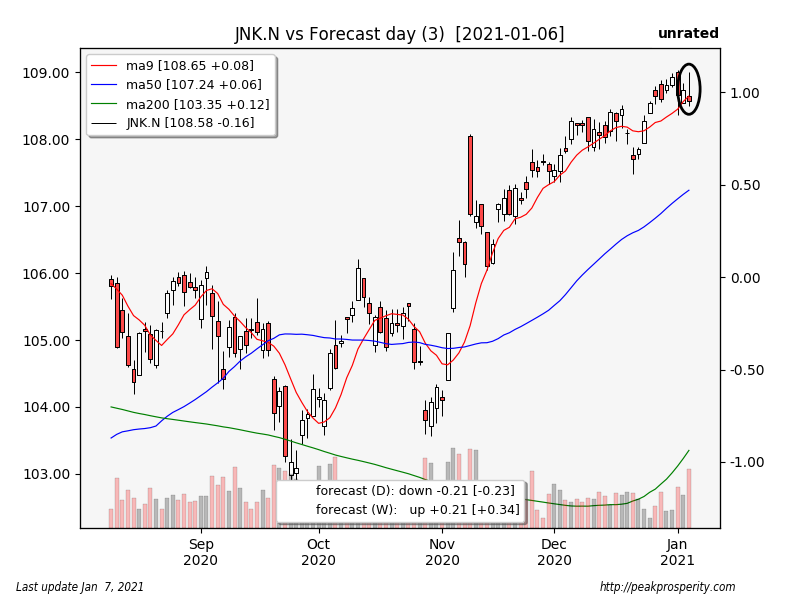 The GLD ETF tonnage on hand was unchanged at +0.00 tons, with 1187 tons remaining in inventory.

Physical ETF discounts continue to fall, while premiums of the big bars at retail have moved higher.

Gold dropped hard, silver fell and then mostly bounced back, while the miners dipped, then bounced back even more strongly. I’d interpret that as a positive for the PM complex as a whole.

The buck made a new low, but then bounced back. It might be a low – although, headline risk remains substantial.

Bonds had a really bad day. Most of the selling occurred in Asia – the drop in bond prices weren’t driven by events in the US. Those bond traders may have had the inside poop on how things were going to go. It was a new 10-month high for the 10-year yield.

With the Biden Donor Class now in complete control over the government, what will they do? They have been waiting for this moment for four long years. I put these in order of probability — according to me.

* Nancy’s $3 trillion dollar HEROES act [12% goes to actual Americans, the rest to the “Hero” Donors]
* A National Lockdown “strategy” [which will accidentally further destroy “non-essential” small business]
* Some sort of vaccine mandate
* Some sort of national “contact tracing” [government back door] tech requirement for every phone
* Packing the Supreme Court
* A UBI, provided by the Fed using the new FedCoin
* Adding two new states to the Union
* Revoking Trump’s CCP tariffs and sanctions
* More H1-B Visas
* Citizenship for the 20 million illegals currently resident
* Medicare for all future illegals
* No more “children in cages” [i.e. come with a kid, you get in for free]
* An end to all deportations
* A $10 trillion Green New Deal [another Donor giveaway, with a thin layer of “green cover”]

Most importantly for us peons, will “the Party of Science” finally recognize that treatments for COVID19 exist? Which boils down to: will the NIH/Biden Donor Class allow them to do so?

It sums to a fair amount of headline risk. The bond market appears to be more-than-hinting at trouble ahead. Perhaps crappy debt also, but that was a much fainter signal. My gut (and the miners) tell me that the gold sell-off was just a headfake.

This post is very good and useful guys. Thanks for writing such beautiful articles. It gives multiple knowledge and the main interesting thing is that you can share your feeling here.

But my inflation, re-engineering portfolio is rocketing higher.  Seems like the market has taken Chris and Adam’s book Prosper to heart!

What do you think? Are we in bubble territory?https://www.marketwatch.com/story/bitcoin-is-headed-for-a-supply-shortage-and-that-will-keep-pushing-up-prices-11609861504

It appears that there are not enough BTC to go around so maybe the ol supply/demand scenario is holding sway.

You may have missed this so I will post it here so you might comment on it in the Jan 7 update. Commentators were opining in Dec that it appeared BTC would not break $20k. by year end. Well it smashed through and almost made it to $30k. Now a week later it topped $40k.. Would love to hear your analysis.

Mohammed, you’re going to lose all credibility sandbagging like that…