At the open in Asia, gold spiked up to a new 6-year high of 1590, but then spent the rest of the day selling off, resulting in a failed rally. The shooting star candle was a reasonably strong bearish reversal (43%), but forecaster climbed, moving higher into its uptrend. Gold remains in an uptrend in all 3 timeframes.

Futures are now projecting a 9% chance of one rate increase at the Jan 2020 meeting. 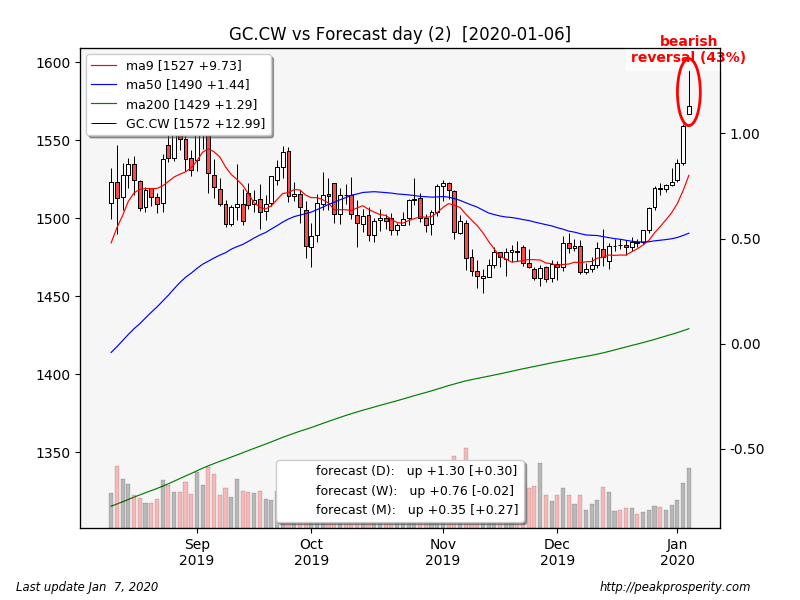 Silver’s major intraday move happened a few hours after the open, jumping to 18.55, and then selling off for the rest of the day also. The northern doji candle was a reasonably strong bearish reversal (48%), and forecaster climbed, moving higher into its uptrend. Silver remains in an uptrend in all 3 timeframes. 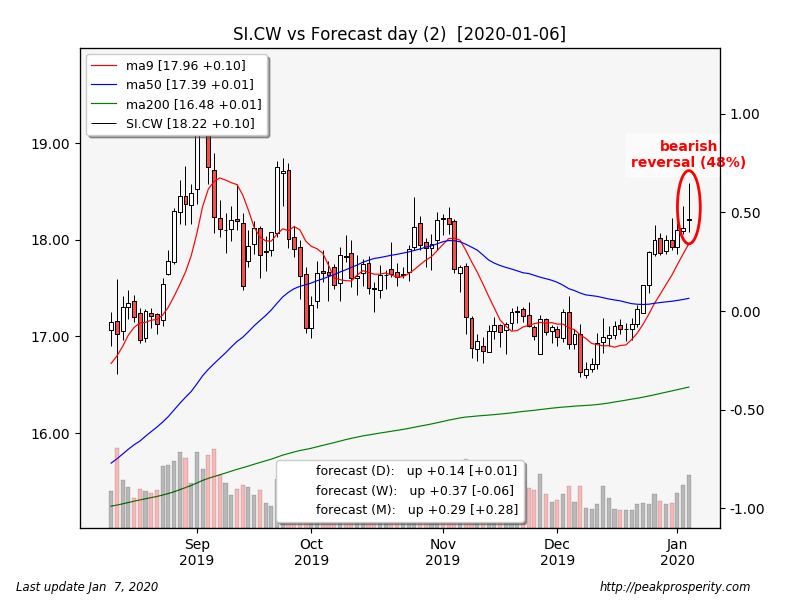 The miners gapped up at the open, and then spent the day selling off. GDX moved up +0.17% on moderate volume, and GDXJ climbed +0.10% on moderate volume also. XAU fell [-0.32%], the long black candle was a bearish continuation, and forecaster dropped, moving deeper into its downtrend. The miners remain in an uptrend in the weekly and monthly timeframes. The miners closed below the 9 MA today, which is a bearish sign. This marks 4 days of slight downward movement by the miners – they are clearly under some selling pressure right now. 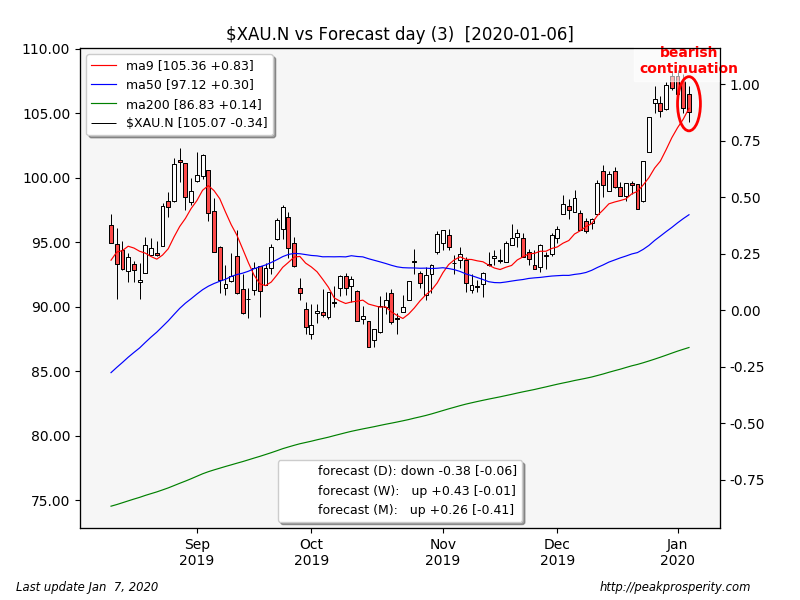 The buck dropped -0.18 [-0.19%] to 96.25 on moderately light volume. The confirmed bearish high wave candle was a probable bearish reversal (57%), and forecaster dropped, moving deeper into its downtrend. The buck remains in a downtrend in the daily and weekly timeframes.

Crude jumped to a new high (64.72) early in the Asia session, then spent the day selling off. Crude closed down -0.23 [-0.37%] to 62.52 on heavy volume. The long black candle was a reasonably strong bearish reversal (43%), but forecaster climbed, moving higher into its uptrend. In spite of the failed rally, crude remains in an uptrend in all 3 timeframes. 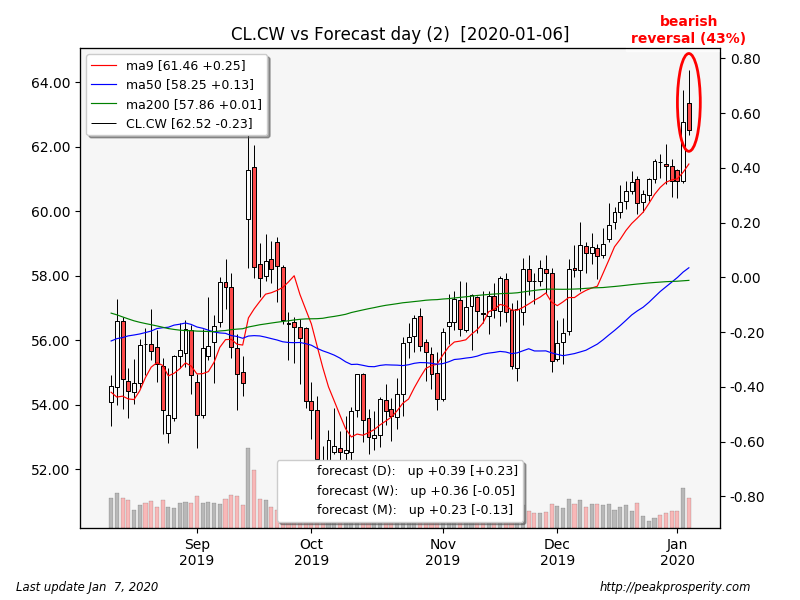 SPX futures gapped down at the open in Asia, but rallied once the US market opened at 9:30 am. SPX ended the day up +11.43 [+0.35%] to 3246.28 on moderate volume. The closing white marubozu candle was neutral, and forecaster climbed, moving higher into its uptrend. SPX remains in an uptrend in all 3 timeframes.

TLT dropped [-0.57%], the dark cloud candle was a bullish continuation, and forecaster dropped, but remains in an uptrend. 30-Year Yield was unchanged at +2.26%

TY inched down [-0.10%], the long black candle was a bullish continuation, and forecaster climbed, moving higher into its uptrend. TY remains in an uptrend in both daily and weekly timeframes. 10-Year Yield fell -1.0 bp to +1.79%.

JNK dropped [-0.06%], the high wave candle was unrated, and forecaster dropped, and has dropped into a no-trend state. JNK is in a slight uptrend in the weekly timeframe.

Gold, silver, and crude jumped to new highs in Asia, but then sold off as the day progressed. Gold and silver managed to keep at least some of the gains into the close, but they all looked like failed rallies by end of day.

The media absolutely loves wars. Wars are great for ratings, that sells ads, and everyone in that business is made happy thereby. Perhaps they can be forgiven for hyping the story more than a little.

Of course the Mullahs could wake up tomorrow, having decided that they don’t care about their petroleum refineries, and try to sink a US ship or two, or lob some missiles at a US base – but I don’t think that will happen, because that group has been in power now for 40 years, and they have shown no signs of insanity, senility, or generally wanting their time on the “throne” to end, which it probably would if their national gasoline production suddenly dropped off to zero. Their “it wasn’t us” strike on the Saudi refinery was well done, but is not in the same league as to what would happen if Trump got really upset with them. They know this, and most likely, that’s why they haven’t acted, even though it is well within their capability to have done so.

The market may be supporting this assessment: there was no huge influx of open interest in either gold or silver that crushed what would otherwise have been a fantastic new move in gold. In fact, gold actually saw a drop in OI today. This suggests that today’s reversal bars are “natural” in origin. Might this mark the top for gold, at least for a time? Well, the miners are suggesting this could be the case. If we can trust the data from the CME, official intervention didn’t cause today’s reversal candles.

The silver reversal model remains bearish.  Combine this with the candle code, and maybe today will be a near-term top for our second-favorite metal?

I continue to work on these models.  I fixed a bug and it really helped the model to resolve.    Silver’s model appears to resolve best, FWIW. 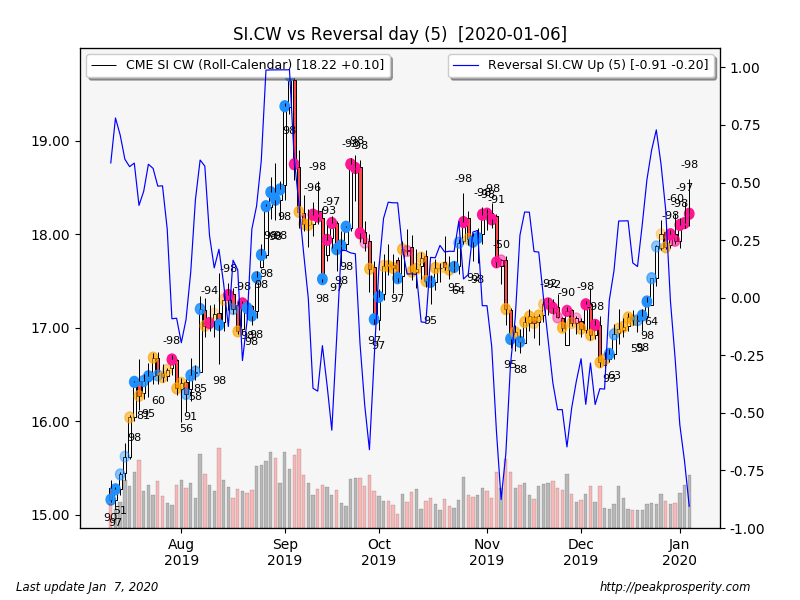 Being a Technical Analysis wizard yourself, I wanted to ask you what kind of credence you give to expanding megaphone patterns?

Over the last few months it looks like the S&P500 has convincingly broke out of an expanding megaphone pattern. As I understand it, the implication is that S&P500 is going parabolic now and the upside potential of this move is the stratosphere.

Pure mania lies dead ahead and the stock market is going to “party like it’s 1999”, lol.

This actually makes sense to me, especially when the miners and silver have not confirmed the moves in gold over the last year.

GDX has failed to break out of its 7-year base consolidation pattern ($31), and the gold-silver ratio is still above it’s 80 resistance level. So if these patterns are not broken soon, I don’t think I can trust this move in gold, if history is any guide.

I drank the gold kool-aid and now I am peeing blood.

I guess I’m going to give this gold move another $150-200 upside and then shut everything down if the miners and silver continue to lag.

Then I will have to go long the S&P500 for a year or two. Holy crap! Is this a nightmare? Did I die? Mr. Market is such an ass.

Please tell me I have it all wrong. Thanks….Jeff

Hi Dave, I hope you have time for these great questions. Other analysts I put faith in are also talking of a possible melt-up in stocks and about the lagging silver and miners. Thanks, Pete

Ok, well first, the “lagging miners” (as measured by XAU) jumped 50% last year.  Some of mine are up 100%.  I’m pretty happy with that “underperformance”.

Longer term forecaster suggests the pace of the rally is slowing.  FWIW.  Maybe it is all about the impending resistance from the 2016 high.  All the poor suckers who bought at the high are looking to get out even.

And there is this chart.  You can look at this one of two ways.  Choice 1: the miners look pathetic.  Maybe Peak Gold (or rather, steadily declining grams/ton ore grades) is hosing them.  But (choice 2), if gold does get really out of control, a mean reversion move would result in a minimum of a 3x move.  And that’s just to get back to the lower band for the ratio (0.07 to 0.20).  If gold broke 1900, maybe a 4x?  And much more for the crappy miners, and/or the juniors.  Seniors might go nuts trying to acquire (and overpay for) the juniors once more.

I don’t know anything about the SPX megaphone patterns.  One guy I respect said I should investigate patterns because they are the place where all the good stuff happens.  I had some code that poked around at automated pattern detection but I didn’t follow it up.

As for SPX meltup – I’m not a cheerleader for either a breakout or a big crash.  Presumably as long as money printing continues, along with buybacks, things will keep moving higher, but its hard to know.  “Fundamentals” (earnings, etc) suggest that buying now is risky – buy and hold for 10 years should end up with a negative expected return.

This chart has me a bit worried – margin debt normally tracks SPX quite closely.  Lately, margin debt has dropped, while SPX has continued moving higher.  Who knows, maybe buybacks and money printing are more important than margin debt. 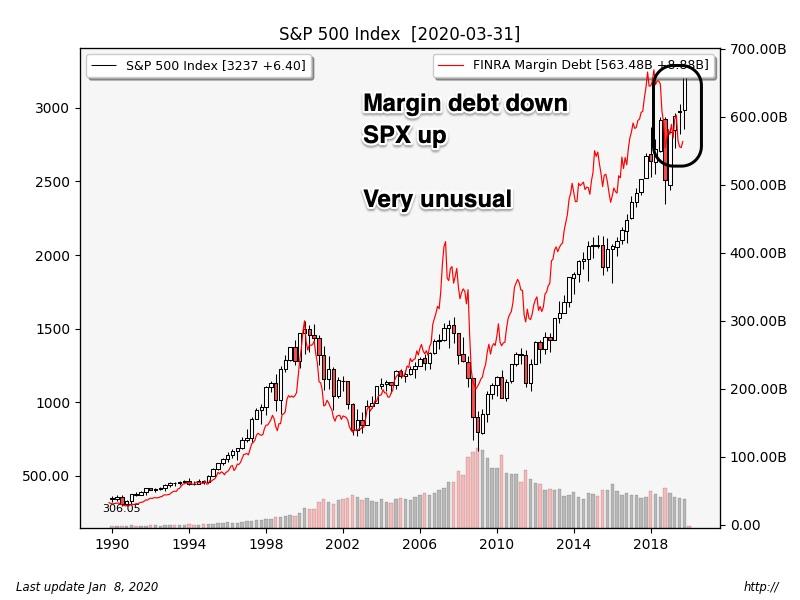 My biggest problem with buying SPX right now is my inner nature.  It loves to buy things on sale.  And that’s not where SPX is right now.

Oil services, on the other hand…my goodness.  Thrown right out with the bathwater.

This model seems right on the money in forecasting moves in the silver miners. It’s a total blood bath in my portfolio of miners today, and since you first posted it there has been real weakness in the miners.

Please keep updating and sharing it. I know it’s got a short track record but I really think you are on to something.

I did a little back-of-the-napkin analysis of your model applied to trading the SILJ (Silver Junior Miners Index). I had to guesstimate the actual entry and exit dates from your chart, but I think I got pretty close.

The trading strategy would be to buy the SILJ the day after your model produced two consecutive buy signals and sell the position the day after a (single) sell signal. Add any profits to the next trade and continue so forth.

Your model would have protected against any serious downside on the trade, and avoided most of the whipsaw price action. 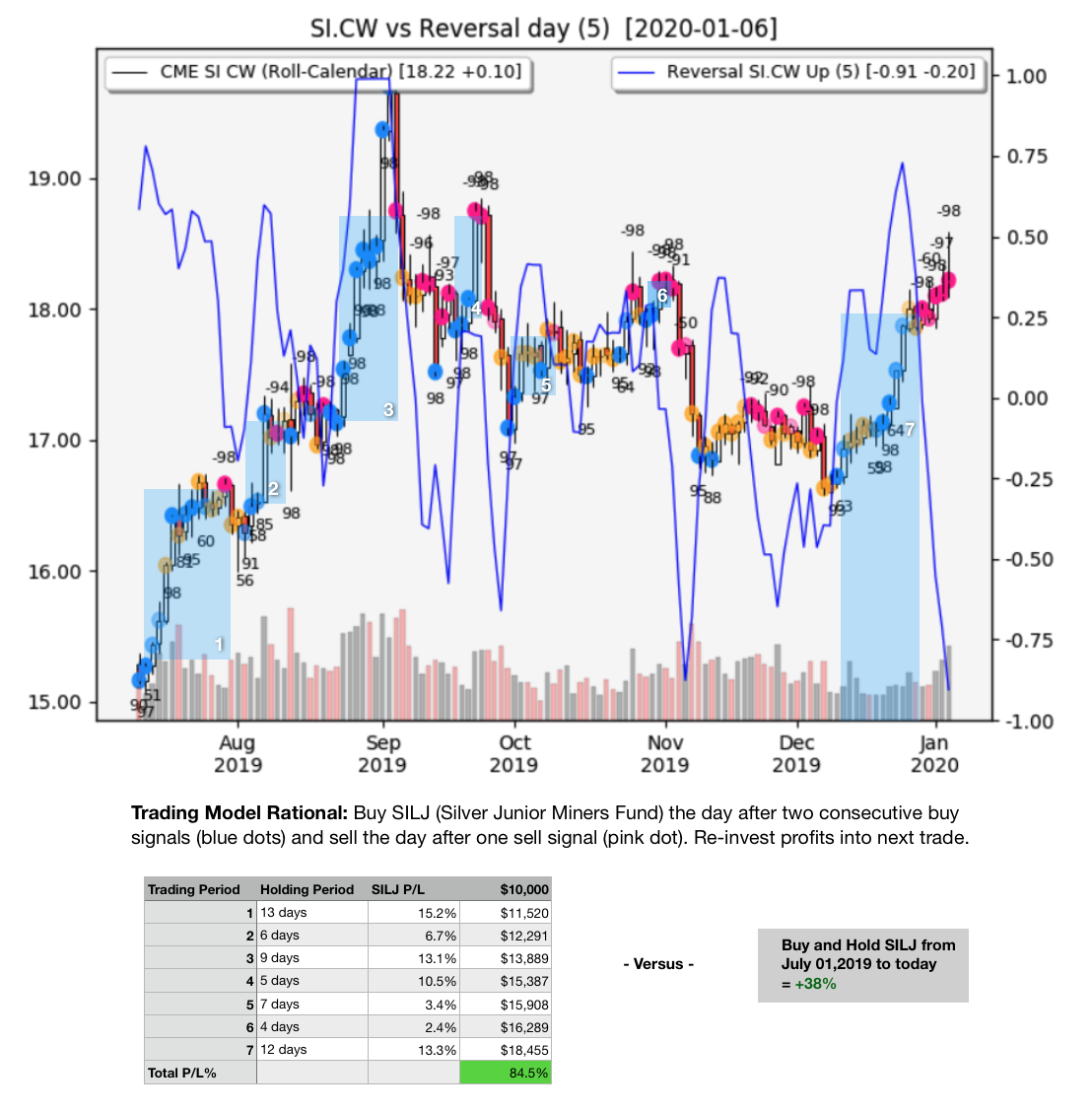 According to my hasty calculations, this strategy would have retuned 80%-ish versus 38% gain in a buy and hold strategy (and provided much better sleep).

It would be great to get the actual signal dates to make a more accurate performance calculations.

Great job….you are a wizard.

Funny story.  I shorted silver after seeing all the red.  Yesterday.  I got to watch as silver spiked higher after the strike, and then retraced after we saw “completed.”  My trade is now in the green.  Is this good or bad?  I don’t know.  Terrible discipline, I probably should have put in a stop.  But there you go.  Fortunately it was one of those mini contracts, so no big deal either way. 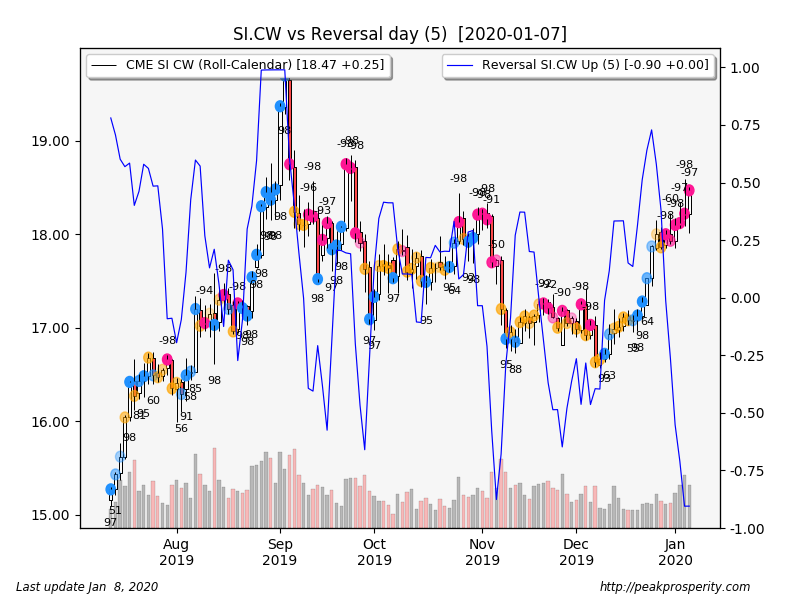 I have an ROI analysis which uses different trading algorithms and applies it to the signals.  These numbers are all ridiculously good.