The rally in gold today was all the more remarkable given the sharp rise in the buck.

Gold’s rally took place during London and New York hours.  The long white candle was a bullish continuation, and forecaster climbed, moving higher into its uptrend. Gold remains in an uptrend in all 3 timeframes – and the uptrends are strengthening.  Gold’s rally caused it to break out and close above the previous high, which is a bullish sign.

COMEX GC open interest rose +1.8K contracts. Current open interest for GC: 73% of global annual production, up +0.16% today. That’s a very mild increase – perhaps that’s why gold managed to do so well. It all strongly suggests there is strong buy-side interest in the yellow metal.

Futures are projecting a 4% chance of one rate increase at the Jan 2020 meeting. 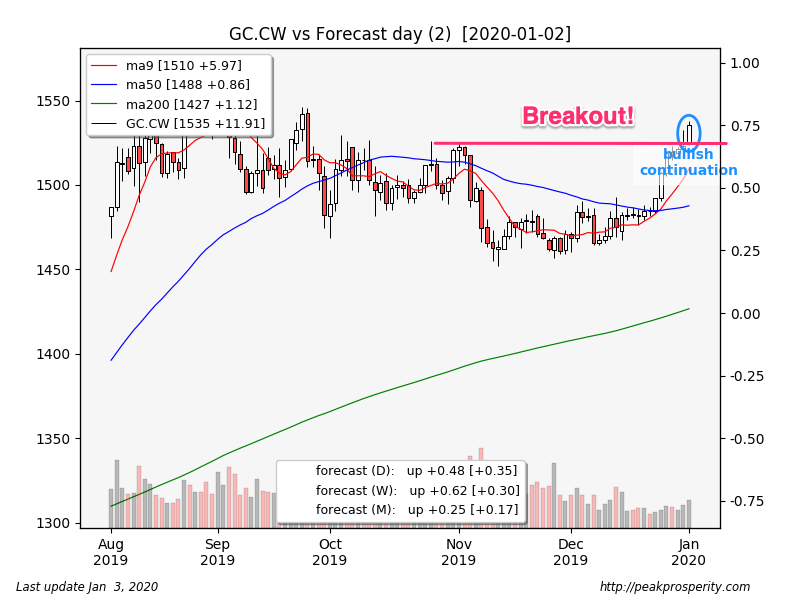 The bulk of silver’s rally took place between 8am and 9am, during the London session, but the bias was to the upside all day long.  The long white candle was a bullish continuation, and forecaster climbed, but remains in a state of no-trend. Silver remains in an uptrend in both weekly and monthly timeframes. 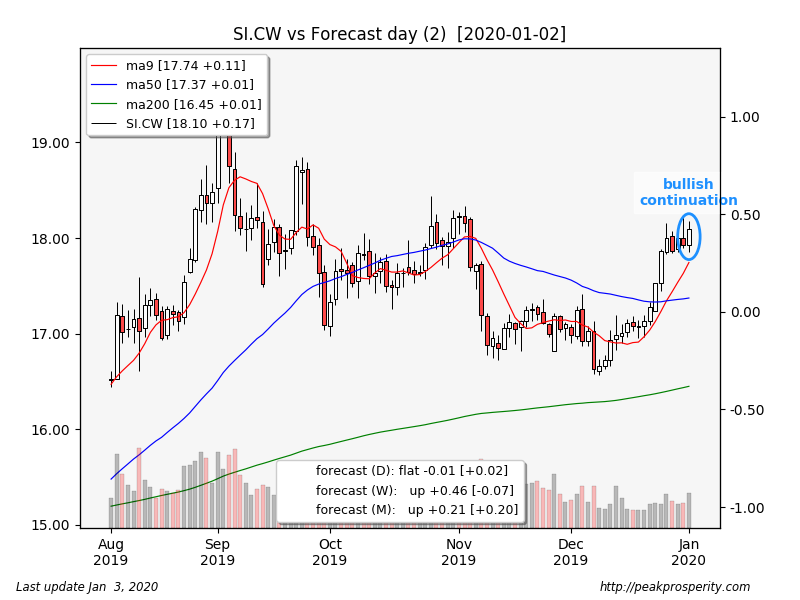 Miners gapped up at the open, then sold off in the first few hours of trading.  The weakness in the miners was curious, given gold’s strength. GDX rose +0.24% on moderately light volume, and GDXJ moved up +0.31% on moderate volume. XAU fell [-0.38%], the long black candle was a possible bullish reversal (31%), and forecaster fell, but remains in an uptrend. XAU remains in an uptrend in all 3 timeframes. 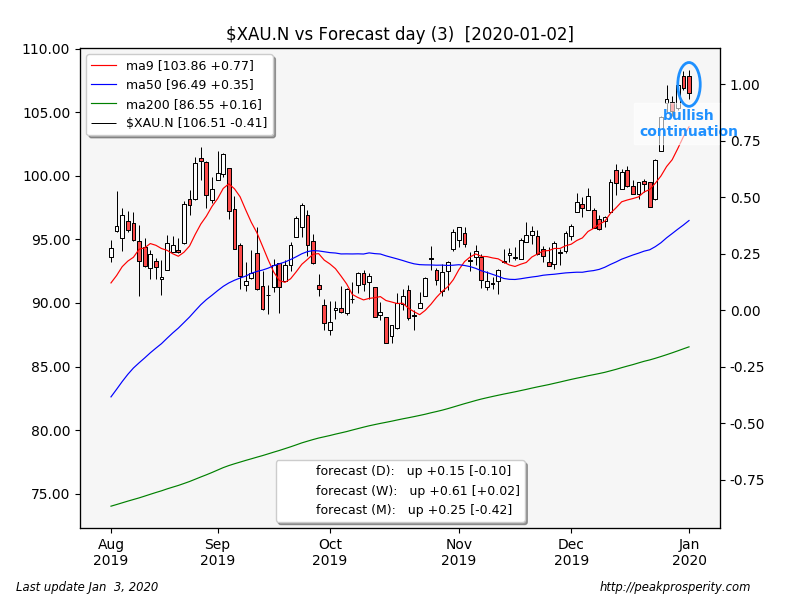 The buck jumped up +0.46 [+0.48%] to 96.44 on moderate volume. The swing low candle was a probable bullish reversal (55%), and forecaster moved strongly higher, but remains in a downtrend. In spite of today’s rally, the buck remains in a downtrend in both daily and weekly timeframes, with the monthly in a state of no-trend. 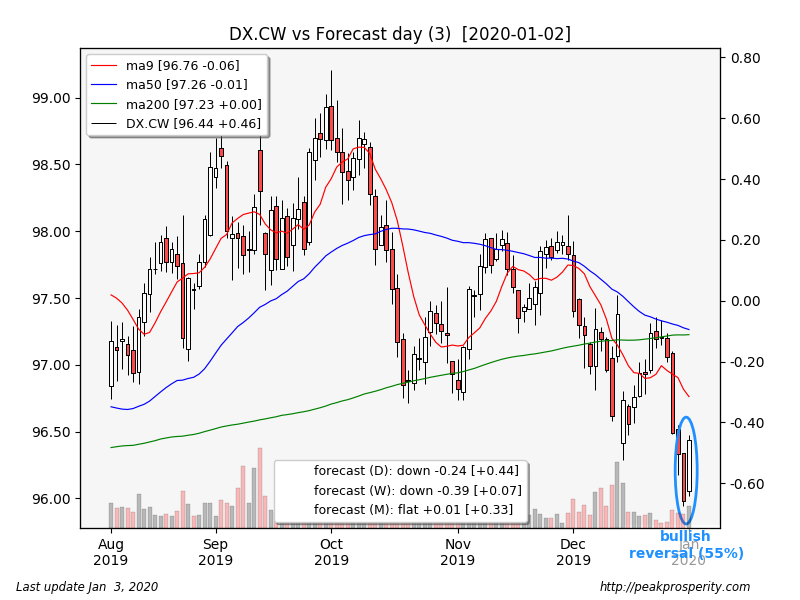 Crude inched down -0.02 [-0.03%] to 60.93 on moderate volume. The spinning top candle was a bearish continuation, and forecaster was largely unchanged; crude remains in a downtrend on the daily, but in an uptrend on both weekly and monthly timeframes.

SPX rallied +27.07 [+0.84%] to 3257.85 on moderate volume. This was yet another new all time high for SPX. The long white candle was a bullish continuation, and forecaster climbed, moving back into an uptrend. SPX is now back in an uptrend in all 3 timeframes.

TLT rallied [+1.13%], the swing low pattern was a likely bullish reversal (65%), and forecaster moved higher, but remains in a downtrend. TLT remains in a downtrend in both the daily and weekly timeframes. 30-Year Yield fell -6.0 bp to +2.33%. TLT managed to close back above its 9 MA; is this really a bullish reversal for TLT? Its hard to see that happening when SPX makes new highs.

TY climbed [+0.27%], the long white candle was a possible bullish reversal (33%), and forecaster climbed, moving higher into its uptrend. TY remains in a downtrend in both weekly and monthly timeframes. 10-Year Yield fell -4.0 bp to +1.88%.

JNK rallied [+0.40%], the long white candle was a bullish continuation, and forecaster jumped higher, moving back into an uptrend. JNK is now in an uptrend in both daily and weekly timeframes. JNK’s rally supports the risk on sentiment in equities.

CRB fell -0.14%; only 1 sector fell, and it was livestock (-0.08%). Looks like there are different closing times with CRB and the component sectors.

After market close, news broke that the US killed an important Iranian General (and also an Iranian-backed Iraqi militia commander) in Baghdad using a drone strike. This was done, according to the Pentagon, to deter future Iranian attack plans.  [Killing an important official of a foreign country for “deterrence” purposes – that’s one I haven’t heard before.]

Currently, gold is trading at 1552, and crude at 63.75. The buck is up as well [+0.25%], while the minis have been hit fairly hard [-1.34%]. Most likely, Iran-related news items will drive prices until things get sorted out.  Whatever that means.  For us, it suggests that normal market predictors are not likely to work so well.

I noticed that you have removed your forecaster lines from your charts. Do they just clutter things up? Have you had success using them this past year?

Thanks as always for your thorough write ups.

Yeah it was partially a clutter issue.  But it was also that the daily forecasters aren’t so good to be trading – the weekly ones are much better, which is why I left them in place.  Unless the market is trending strongly, trading the daily will lose you money.

The funny thing is, I do use the forecasters as inputs to some other models, and they actually help a lot.

I’m working on a different sort of model for trading.

Well, at the start of the trading day today, I was a bit concerned that my silver trading model would end up looking more than a little silly, with all its talk of lower silver prices ahead.

But with gold up +22, and silver barely in the green, it does seem as though the model might have some value after all. 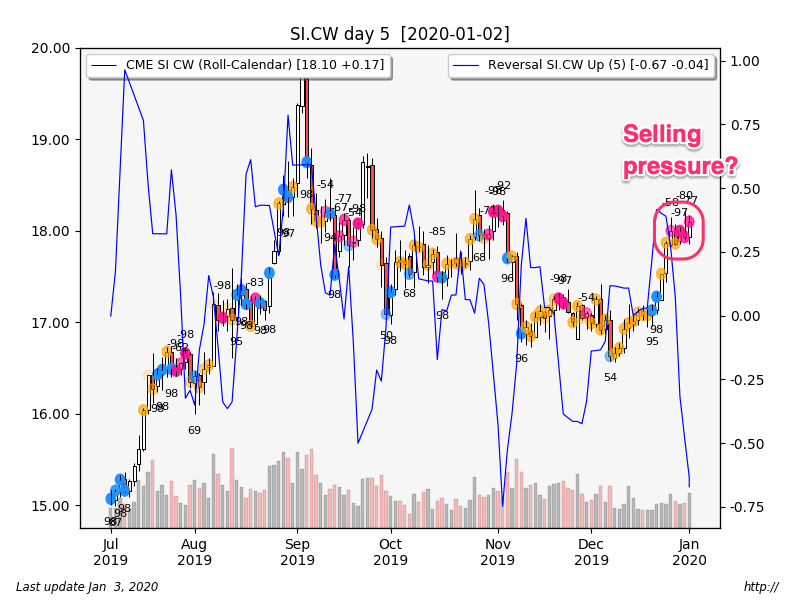 Contrast with gold, which suggests smooth sailing ahead.  And sure enough, gold jumps up to 1550. 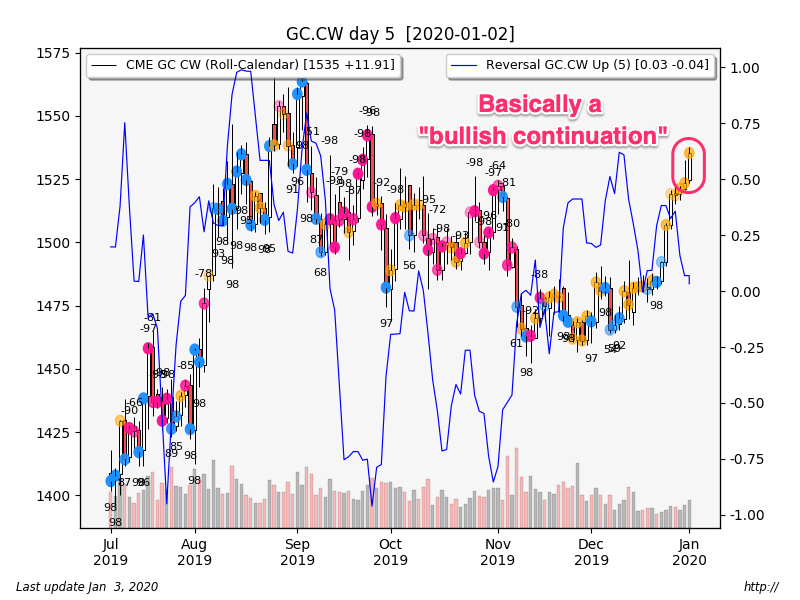 I personally don’t believe that news has any real effect on the markets, unless it’s market news, lol. Good job on your trading model.

Just for contrast, my “trading model” is to take the dumb-money approach. When they say say “past performance doesn’t predict future performance” and “you can’t time the markets”, I say boloney.

With all the smart money using quant strategies, and Joe Public piling into index funds and ETFs, where can one find an asset that isn’t correlated to the market? Heck, at this rate, in the next liquidity crisis even money-market funds will be illiquid.

So I choose the dumb-money side of the market equation: buy and hold the most volatile and cheapest (think penny) stocks, of the crappiest companies (think miners), in the most underperforming sector in the last 8 years (think commodities).

My portfolio is taking a beat down in 2020 so far, but I just don’t feel good about my portfolio unless it makes me want to throw-up. (see Puke: The Best Investment)

Keep the updates on the trading model coming. I appreciate them.

I forget when I did the analysis, but I noted that, off the lows, it was the crappy miners that did the best.  So your strategy has the highest risk (and some pretty unpleasant volatility) – but also some really astonishing returns if you get the timing right.

I’m with you on half my portfolio – I got into oil services “a little bit early” (truth be told, a year or two early) and some are still alive, while others have gone through BK.  My miners have made up for the losses in services.  But once shale starts to decline, I’d expect the services group to simply scream higher.

No doubt it will be the crappy services companies that will rally the hardest.  But getting the timing right – if you buy too soon (like I did), then too many of them go BK before the recovery.