Perspective on “cases” and PCR

Is there a refutation to the basic premise of this article?

“I believe I have identified a serious, really a fatal flaw in the PCR test used in what is called by the UK Government the Pillar 2 screening – that is, testing many people out in their communities. I’m going to go through this with care and in detail because I’m a scientist and dislike where this investigation takes me.”

That article is accurate.  I laid out that false positive math a long time ago in a video…still as true today as back then.

Summary is, if your prevalence is low, then even with the best of tests your false positives are absolutely going to swamp your actual positives. 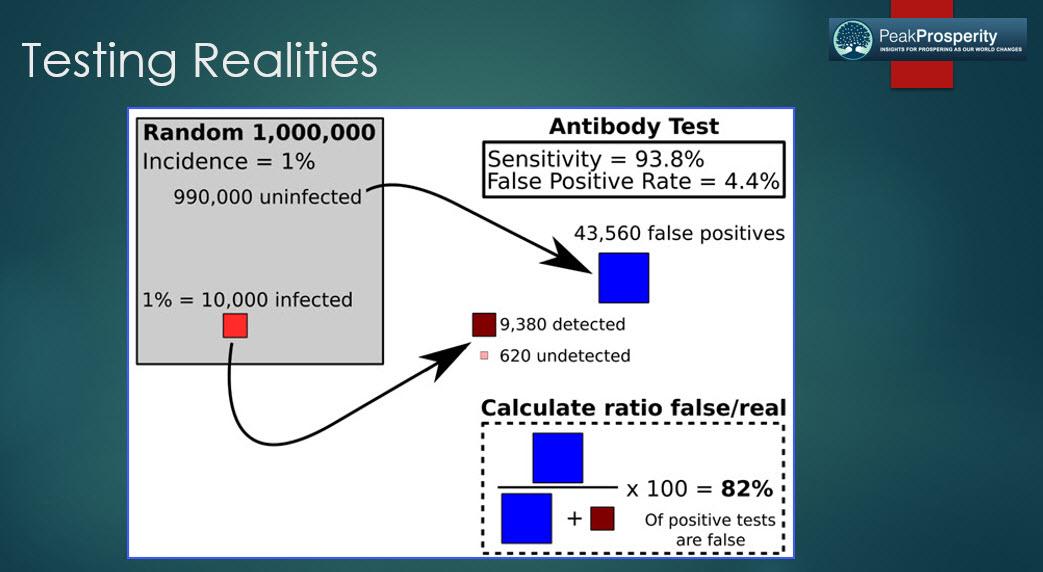 The actual incidence is somewhere between 1:1000 and 1:2000 so the false positive rate is actually much worse than what I laid out here (as a hypothetical incidence of 1% or 1:100)

I fully understand your math above.  Fundamentally it is based on a false positive rate of 4.4%.  Is there any good source for the actual estimate of false positives with regard to current SarsCov2 PCR tests?  Everything I find tells me they are more than 99.9% accurate?  I don’t buy that simply based on the number of individuals I’ve been in contact with who received a false positive test, verified by a second negative test.  Many thanks in advance if you can lead me to some real data on false positives.

Thanks, Dr. M. It seems the fear campaign has really ramped up again the past week or so.

Had a patient in last week, a clerical person from UT Southwestern Medical, talking about working from home. She said that they would “re-evaluate” in January. JANUARY! I said that I thought all the numbers were trending downward in Texas. Her response was that she was responsible for the numbers and the dropoff was not significant enough. So, I checked the numbers for the school.

I guess they are waiting for a flat zero.

Statewide daily deaths and cases as well as county data for the past couple of days are here.

Downstate, positive rates are < 1% with a few locations having brief surges to around 2%.

Thanks for those links.  I was looking at the comorbidity numbers, although no surprise to readers here, it reports that 90.1% of fatalities had at least one comorbidity, the top three being hypertension, diabetes, and hyperlipidemia.

Any help validating the 0.8% false positive rate – for the life of me I can’t validate this.  All of the public info in telling me the error rate is much smaller (<0.1%)?

As I understand it there are no less than THREE types of false positives in PCR testing:

– arbitrary cycle thresholds allow for adjusting false-positive rates at will (Ct>50 would mean almost everyone would test positive)
– no ability to detect viability (can’t distinguish between dead/neutralized/shedded and alive/viable viral RNA)
– detection of other hCoVs present year-round in lower-quality PCR kits (most? Primarily those from China? Not the WHO one that also tests for the E protein in addition to RdRp)

When considering all the types of false positives, I bet it’s way higher than 1%, and certainly much higher than 0.1%.

Chris, I think your presentation of yesterday was awesome!

In the Netherlands, the government and the local CDC (RIVM) have screwed up so many times, and covered up or hid new evidence that trust is wearing quite thin.

Some anecdotes about our 4th turning:

Our draconian, always lecturing and preaching interior minister Grapperhaus recently married, and of course, being a special person, did not follow social distancing rules during his wedding. Pictures were leaked, became viral, but he is still in his position. The standard response when cops now interfere in parties etc. and give out tickets: my name? My name is Grapperhaus! Only massive violations are now being prosecuted…

But these people (young social media influencers and some local celebreties) are definitely no intellectual or informed role models, but are prove to be flexible and able to engage in debate.

They will most probably be blocked, ridiculed or demonized. But after their yesterday’s presentation, I am (partly, conservatively) with them!

I submitted a Freedom of Information Request trying to get accurate info on the cycle thresholds of the PCR testing being used by the UK government. After three weeks they came back with nothing useful. So instead I took a different tack…

I happen to know the lead COVID analyst in the local NHS trust (we sit on a governing board together). I asked him about the cycle thresholds. He didn’t know anything about them as he’s really just a “number cruncher” but looked into it for me as he works “with the heads of pathology and microbiology and some key consultants regularly” and because he’s a nice guy.

Yesterday he came back to me having gotten in touch with one of his colleagues to ask about the cycle thresholds being used. This was the answer:

“45 cycles as the enzyme is shot after that.”

I’ve variously seen evidence that the PCR tests shouldn’t be cycled beyond 33-36 cycles. But 45?! That’s an amplification of over 35 trillion times!

Surely, this is why the UK is getting such staggering numbers of “cases”?