I’ve worked in teaching children (and school administration) ages preschool through age 12 for my entire professional life (30 years). This whole affair makes me so sick I can hardly see straight.

I want to take a minute to thank you for so articularly expressing the revulsion from the point of view of a non-teacher. For years, I have seen atrocities committed against children in this country that seem unbelievable to ‘civilians’. Epstein’s murder does not come as a particular surprise to me, that powerful people cover up their sins is an exasperating truism.

Please keep writing about this, it dovetails well with the other objectives you and Adam have for PP.

The FBI, like the IRS, has revealed itself as an arm of the Democratic National Committee and the so-called “deep state” it serves. With the unexplained extrajudicial death of Jeffrey Epstein in a federal detention facility, the Department of Justice itself has publicly forfeited its claim on integrity, and therefore, on legitimacy. The DoJ now relies on fear alone, an all but infallible sign of unstable government. This fundamentally changes the relationship between DoJ, its agencies and the citizen. I’m still thinking it through, and you should too.

The US is a Potemkin Village teetering on the edge of a dramatic collapse. The guards at the MCC guarding Epstein were being forced to work mandatory overtime due to staffing shortages, due to a hiring freeze, due to budget shortages, due to our fiat money system and astronomical debt. One of the two guards is said to have been on his 5th overtime shift this week which looks to me like a 90 hour work week (as an unarmed guard with some of the worst criminals in the country). Do you think they might’ve nodded off in the early morning hours?  Skipped some mandatory cell checks? Whose fault would that be?

You can glimpse the decay behind the happy talk and bluster on a regular basis. Here’s a ship we sent to Germany for an event that was largely a photo op to impress our allies and enemies. This is the same Navy that keeps running into things on the high seas, in peacetime. 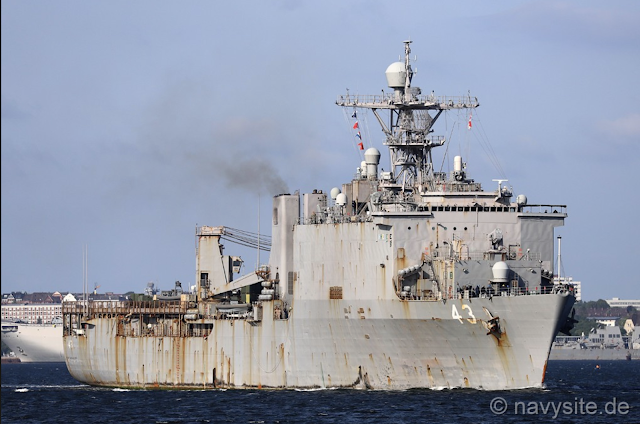 As the lamestream press, staffed with “journalists,” does it’s best to cover up the most recent obvious excess of a corrupt deep-state system, the Epstein story gyrates around wildly.

I think the purpose here is to heap so many “explanations” on the floor that the truth gets lost in the pile.

It’s a reasonable strategy, just pathetic that the press goes along so willfully if not gleefully with it all.

At any rate, among the extra-dumb things recently placed upon the growing pile on the floor we have:

Um.  Overworked maybe to watch over the usual masses of petty thieves and violent thugs.  Not THE MOST IMPORTANT PRISONER IN AMERICA.

For that individual you make sure there’s plenty of coverage.  Both to prevent a suicide OR to prevent an attack by someone.

And, it is simply infuriating for t”them” to try and claim that Epstein’s lawyers are the ones that had him taken off of suicide watch.  Neither prisoners nor lawyers get to dictate anything about a prisoner’s treatment.

They have zero say in it.  When Chelsea Manning was being tortured with endless months in solitary her lawyers were screaming to get that condition changed.  “Fuck off” said the warden, and that was that.

So it’s positively insulting to have that “the lawyers did it!” thing tossed on the growing heap on the carpet.

Meanwhile, Ben Hunt does his usual spectacular job of putting my thoughts and feelings to words:

Yep.  they had ONE JOB and they didn’t do it.  Ergo, we live in a Corrupt State.

I’m wondering what’s really happening behind the scenes while Epstein is the big story.  His operation was well known for years.  Why did he going down now?  It reminds me of Rummy’s missing trillions the day before 911.

I read somewhere that one of Epstein’s prison guards was killed in a car accident soon after the “suicide”.  It’s what happened to the railroad worker who witnessed some suspicious people behind the grassy knoll fence seconds before JFK got his head blown off.  Oops, I forgot that Oswald’s negative inertia magic bullets did it.

One of Bill Hicks’ 1980s comedic routines posits that “The (Industrial) Elite” have an 8mm recording of the JFK assassination from the grassy knoll angle, which they show to whomever is POTUS to turn them into their puppet.  Both funny as well as (somewhat) plausible.  But, for how long that would work and would that work to control other cabinet leaders, etc etc.  Probably not well enough, IMO.

Enter Epstein’s operation.  The narrative is that he was luring all these people to his plane/island or the like to extort money.   But a majority of the people implicated or rumored so far have much more power than money.   Thus, Epstein sounds more like an asset for the elite/MIC/deep-state.  Perhaps for British’s deep state too.

IMO, the elite/MIC/deep-state suicided Epstein.  The secrecy of the multi-decade control of heads-of-state, cabinet persons and other powerful persons must be protected at all costs.   They would have the motive, the means and would have the assets to help create the opportunity.

“Control files” are a well established method of ensuring that an asset always does what you want. There’s no way we peons can know for sure, but it’s highly possible that Epstein’s coordination of child-based sexual activities for elites was an op intended to generate (or strengthen) control files on participating individuals. In that scenario, Epstein would be only a manager; the directors would be the dark forces that really run things, quietly, from behind the political fray.

Unsure if he’s the medical examiner of record (doesn’t appear so), but still…all of this seems to have an “in your face” quality to it.

“Within hours of Jeffrey Epstein’s death on Saturday, the Internet was awash with conspiracy theories. Although officials said that the politically connected financier appeared to have committed suicide in jail while awaiting trial for multiple sex-trafficking charges involving underage girls, skeptics immediately declared that he had been murdered and debated which of his powerful acquaintances could have orchestrated the hit. Others insisted, without evidence, that Epstein, 66, wasn’t really dead, and instead had been spirited away to an undisclosed location.

Such overheated speculation is often par for the course when a high-profile person dies under unusual circumstances — as Michael Baden, the “celebrity pathologist” hired by Epstein’s representatives to independently observe his autopsy, knows from firsthand experience.

During his decades-long career, Baden has investigated the assassinations of President John F. Kennedy and the Rev. Martin Luther King Jr., testified as a defense witness for O.J. Simpson and identified the bodies of Tsar Nicholas II of Russia and Nazi doctor Josef Mengele. At 85, he estimates that he has performed more than 20,000 autopsies, and he has been hired as a forensic expert for cases involving civil rights activists (Medgar Evers), athletes (Kobe Bryant, Aaron Hernandez) and celebrities (John Belushi). Along the way, he has abandoned the grim confines of city morgues and become a TV personality in his own right, hosting an HBO show and appearing regularly on Fox News Channel. And he has encountered his fair share of stubborn conspiracy theories that refuse to go away.

“The famous and infamous, the celebrated and notorious, do not bleed and die as the rest of us do,” Baden wrote in the first chapter of his 1989 memoir, “Unnatural Death: Confessions of a Medical Examiner.” “They have scenarios, intricately plotted dramas. Buried villains still stalk the earth, hidden in other guises, and news of their obscure ends in faraway villages only brings disbelief.”” 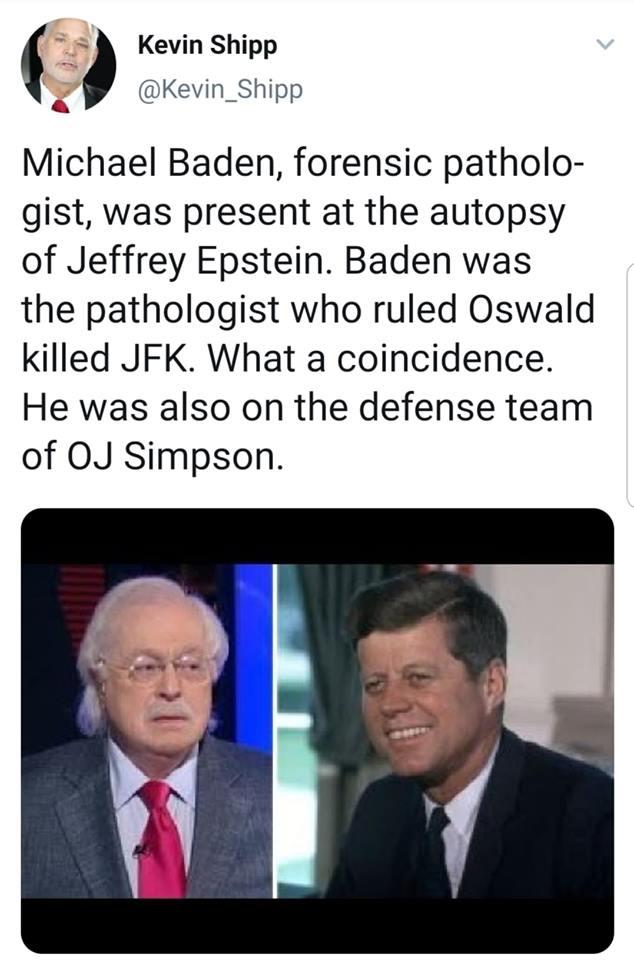 Mega Group, Maxwells and Mossad: The Spy Story at the Heart of the Jeffrey Epstein Scandal

The picture painted by the evidence is not a direct Epstein tie to a single intelligence agency but a web linking key members of the Mega Group, politicians, and officials in both the U.S. and Israel, and an organized-crime network with deep business and intelligence ties in both nations.

While Part I and Part II of this series, “The Jeffrey Epstein Scandal: Too Big to Fail,” have focused on the widespread nature of sexual blackmail operations in recent American history and their ties to the heights of American political power and the U.S. intelligence community, one key aspect of Epstein’s own sex-trafficking and blackmail operation that warrants examination is Epstein’s ties to Israeli intelligence and his ties to the “informal” pro-Israel philanthropist faction known as “the Mega Group.”

The Mega Group’s role in the Epstein case has garnered some attention, as Epstein’s main financial patron for decades, billionaire Leslie Wexner, was a co-founder of the group that unites several well-known businessmen with a penchant for pro-Israel and ethno-philanthropy (i.e., philanthropy benefiting a single ethnic or ethno-religious group). However, as this report will show, another uniting factor among Mega Group members is deep ties to organized crime, specifically the organized crime network discussed in Part I of this series, which was largely led by notorious American mobster Meyer Lansky.

As this report and a subsequent report will show, the Mega Group also had close ties to two businessmen who worked for Israel’s Mossad — Robert Maxwell and Marc Rich — as well as to top Israeli politicians, including past and present prime ministers with deep ties to Israel’s intelligence community.

One of those businessmen working for the Mossad, Robert Maxwell, will be discussed at length in this report. Maxwell, who was a business partner of Mega Group co-founder Charles Bronfman, aided the successful Mossad plot to plant a trapdoor in U.S.-created software that was then sold to governments and companies throughout the world. [Promis]  That plot’s success was largely due to the role of a close associate of then-President Ronald Reagan and an American politician close to Maxwell, who later helped aid Reagan in the cover-up of the Iran Contra scandal.

From the Mint Press News article series by Whitney Webb posted above and reviewed in a (long 2 hour) podcast by Quoth The Raven.

Whitney Webb’s series on MintPressNews (dot) com looks at the history of organized sexual blackmail operations in the USA during the last century. She finds an intersection of organized crime and the intelligence agencies of Israel and the USA. One group became central in the last 3 decades, called the Mega Group, a collection of 20 New York billionaires, who are prominent political donors and (advisors to presidents) in both the USA and Israel.

One example: Les Wexner, Mega Group co-founder and owner of BB&B, Victoria’s Secrets and other brands, purchased a 13 million dollar Manhattan apartment that he had modified to included a led lined bathroom that served as a monitoring station for banks of CCTV cameras and microphones positioned throughout the house. He then let Epstein live there for free for several years. Then Wexler sold the apartment to Epstein for $1.

The series traces the sexual blackmail story back through J. Edgar Hoover, Roy Cohn and the mob. 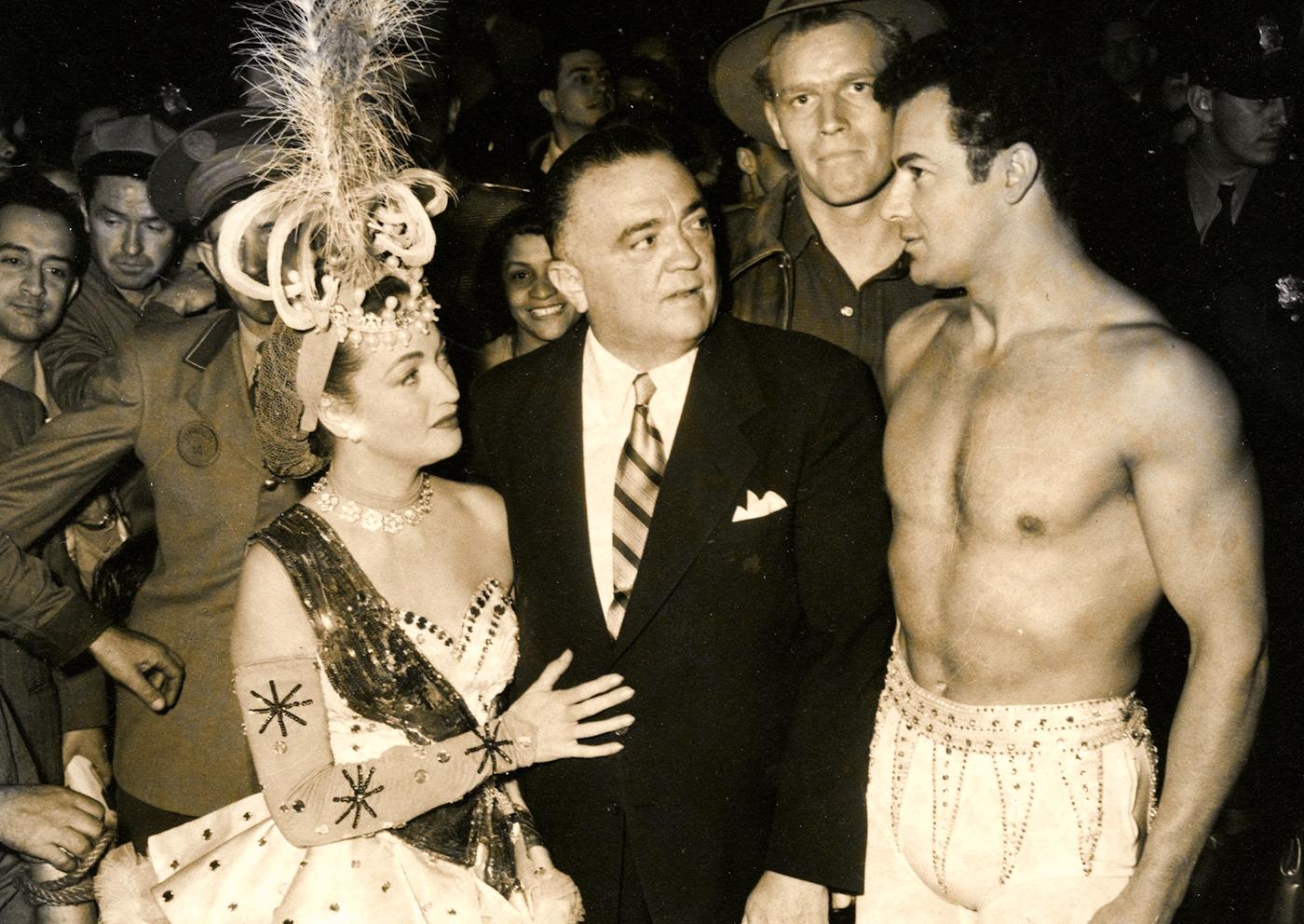 J Edgar Hoover partying in Hollywood.  He is reported to enjoy cross dressing as a woman at private parties and went by the name “Mary.”