Instead of having the conversation scattered in 3 or 4 places, I’m condensing the official Epstein thread here.

Why even bother discussing this?  What does it have to do with the Three E’s?

The #1 thing that has to be moved, has to be nudged, cajoled, and shifted in a new direction is our driving narrative.  The story we live by is incredibly important.  I wish it was data, but it’s not.  I wish logic and reason were sufficient, but they are not.

The story we tell ourselves is everything.

The Epstein case is instructive because it’s a well known fact that many powerful people took rides on his jet, visited his Island and his many homes to partake in child rape which – according to our official cultural narrative – is one of the very worst things you can do, a crime so heinous that this is the outcome:

An Alabama man convicted of sexually abusing five underage girls was sentenced Wednesday to more than six centuries in prison.

Houston County Circuit Judge Todd Derrick imposed a 615-year sentence on Raven Smith after hearing a plea from the mother of one of the girls.

“I can’t believe what I said meant that much to a judge to punish this man the way I wanted him to be (punished),” the unidentified mother told WTVY-TV.

Smith, 35, admitted to the sex crimes against the girls — all under the age of 16 — and apologized to them in court. He was charged with multiple counts of sodomy, sexual abuse, and rape.

There’s no wiggle room in the legal system if you rape kids.  At least for the average person.  The language used for the little people is seen in the above article; “sodomy, sexual abuse, and rape.”

When Epstein, even to this day, was caught with such images they were called “underage women” or “young women” some such variant.

Here’s one image from the collection (released in the Maxwell court filing). 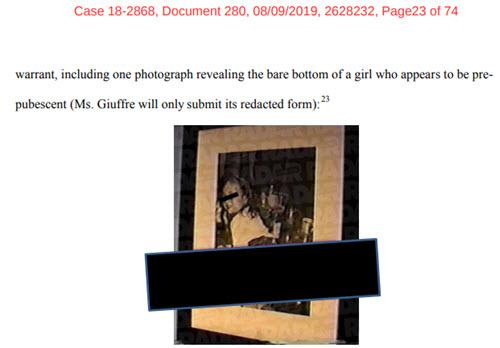 However, to my knowledge, Bill Clinton has never been questioned by authorities about any of the 26 trips he took on the Lolita Express.  Neither has Prince Andrew or any of a dozen other powerful people.

What do you suppose the chances are, if you happened to appear in the little black book of a convicted child molester and sexual procurer that the police wouldn’t knock on your door and ask a few questions under oath?

The chance is pretty close to zero.

So it’s clear there’s one set of rules for “them” and another for the little people.  This cuts against the main grain of the US narrative which is that it is a fair land of rules and laws that apply equally.

Justice isn’t so blind after all.

China is in the process of discovering that the US applies rules rather unequally internationally and that if the US can be trusted at all, it’s that you can trust it will break any treaty or agreement when it wants to.  Iran knows the same.  Ditto the rest of the Middle East.

So the narrative is important, especially when it’s in the process of being shredded.

Given the deep blow to the Deep State, and the very obvious loss of control that happened int eh wake of the Epstein murder, what was the most predictable “next step” by the US Lamestream Media? 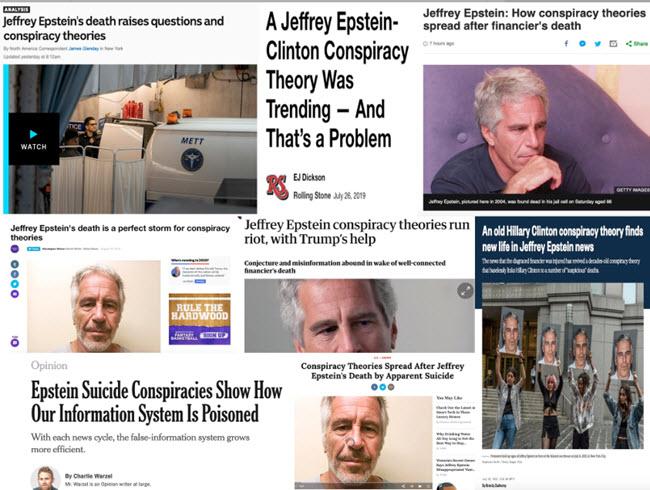 Label any questioning of the known facts of the case (guards mysteriously didn’t visit his cell, cameras not working, taken off suicide watch, many powerful people wanted him dead, etc) as “conspiracy theories.”

That’s their go-to when the deep state gets uncomfortably exposed.  Every time.  And it’s wearing out as a useful tool.

Take a peek at how the WSJ went about this on a front page article today:

The death of Jeffrey Epstein set off a wave of conspiracy theories online that demonstrate both how social media fuels misinformation and threatens to erode public acceptance of the results of any investigation.

Mr. Epstein, 66, was found unresponsive in his Manhattan jail cell Saturday morning after hanging himself, authorities said. He faced trial on charges of orchestrating a yearslong sex-trafficking operation involving girls as young as 14. He had been on suicide watch but was taken off in late July following daily psychiatric evaluations, a person familiar with the matter said.

Among the more outlandish theories gathering attention on social media: Mr. Epstein, who for decades mingled with the rich and politically powerful, including President Trump and former President Bill Clinton, was murdered by someone fearful of what he may say. Another theory postulates Mr. Epstein isn’t even dead.

“outlandish?”  Why is that outlandish?  What exactly is outlandish about the idea that sometimes people would prefer other people to be dead?  It happens all the time.  The dark web is full of murder-for-hire offers for reasons as trite as “I’d rather not pay alimony.”

There was a lot more at stake here than a few bucks.

Also the correct term is “children” not “girls.”

There’s so much wrong with the WSJ hatchet job and spin attempt here that I cannot muster the energy to wade through it all except to say that the WSJ is a big part of the problems we face as a nation.

Along with every other MSM outlet stroking away on the conspiracy angle.

Every day we ask ourselves how this can be real life and then every day we laugh and remind ourselves we cover Twitter for a living. After Jeffrey Epstein committed suicide on Saturday, social media was flooded with all sorts of conspiracy theories (heck, Joe Scarborough tried to blame Russia for it), and it sounds like Hillary Clinton’s long-time pal David Brock’s ShareBlue organization was busy-busy sending out talking points to ‘members of the press affiliated with ShareBlue’:

2 – The guards then failed to check on him over the next several important hours.

“They did not reveal what country issued the passport.”

The goal of the Epstein murder is simply this: to retain their control over all the people in leadership positions that Epstein compromised over the course of his “career”.

They are all assets in place.  Those who control these assets and benefit from this control will do literally anything to maintain them in their positions.

How many owners of “lamestream media” organizations are on tape somewhere doing things with children at the Epstein ranch?  My guess is, more than one.  If you are going to compromise someone, having the media in your pocket is probably top of the list.

And – consider this – Epstein may not be the only one who did this.  Maybe he’s the only one that got caught.

This thing may be really, really big.

I totally agree on the inexplicable soft-pedaling by the media.  It has to be organized.  Both right and left are trying desperately to tamp down public reaction.  Given just how widespread it is, the number of people potentially compromised by this must be truly vast.

The curious thing is – how did the case even get this far?

What are you going to have for dinner?

Interesting summation: “All these unresolved mysteries give Americans a reason to want to arm themselves against a recklessly rogue and sinister government.”