Not only Fox Newz is not airing any criticism of the election irregularities, they quickly cutoff those who mention it, like McEnany.

The Repub party doesn’t seem to actively support its president in his election lawsuits.

So it became painfully obvious that both of them are controlled by the same corrupt deep state. It doesn’t make any real difference if they vote (D) or (R), they are both heads of the same monster.

Are you suggesting that both Fox News and the Republican Party are corrupt and can’t be trusted? But we should then put our trust in Trump?

This would be a rather extreme version of ‘Trumpism,’ locate our full faith in just one man, while ignoring institutions, laws, all media (mainstream, left and right), Democrats, Republicans, and whatever else stands against Trump.

I would think of this as either a Kingship or a Dictatorship. Is this what you’re proposing?

Is this what political discourse has come to in the USA right now?

Perhaps there are no irregularities. Perhaps this is yet again an example of the brain washing Trump exudes over his cult base that shows if he says something enough times it becomes true in the minds of his followers. Be careful not to drink the Kool-aid. It’s as poisonous as the leader.

lol, Not much doubt about that.  Fox News and its many friends left for never never land a long time ago.

Well, Ted Cruz, Lindsay Graham, and now very importantly Mitch McConnell have spoken out. Maybe a few others. But yes, the majority are swamp creatures, some as corrupt as the average Democrat.

There are some good people at Fox News, but they have no control over Fox or News Corp itself.

For those of you willingly choosing to remain clueless, I don’t know how to express how pathetic you are for allowing them to do this to you… Have you looked at the evidence yet???

As Burt Rutan put it:

The MSM and Globalists wish to have the American voter dumbed down to where they can literally be TOLD who won.

This election was pre-ordained by the MSM and the Globalists to have been “won” by Biden.

President Trump by all means has legal cause to file with the Supreme Court. And, with the hard evidence, he will certainly win.

This clear fraud will no longer allow the Left and their ABCNNBCBS buddies to claim that Vote Fraud “does not exist”.

What they have done might finally result in convictions of the criminals and then the destruction of what remains of the Democratic Party.

Absolutely, as we have multiple types of mathematical proof in spades.

Look how many votes we already know were stolen: 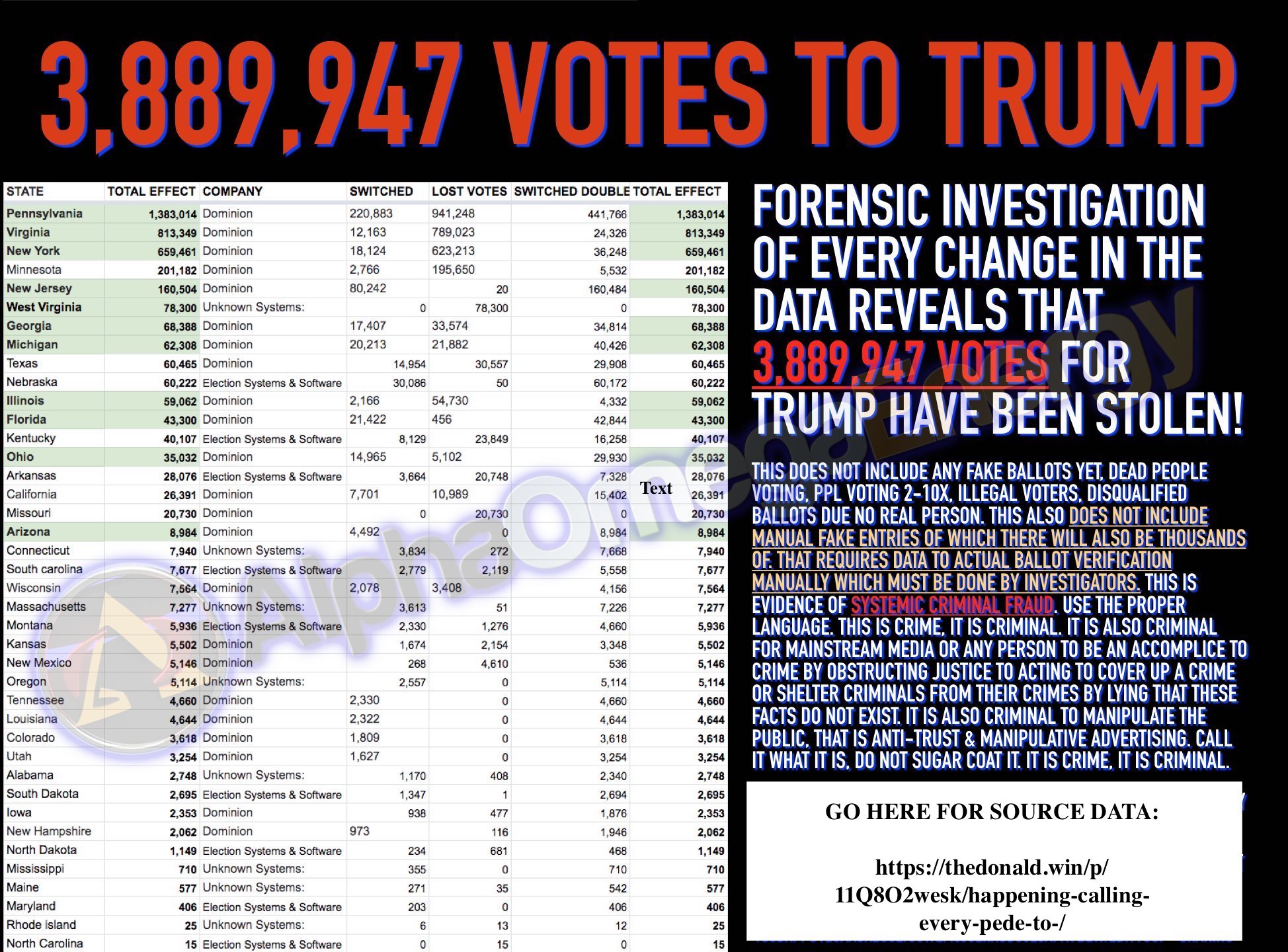 But you keep letting the criminals themselves tell you that you don’t need transparent elections and that vote fraud doesn’t happen, after 4 years of brainwashing you with “Russian collusion” BS.

Technically, there is no constitutional means for Trump to file election lawsuits directly with the Supreme Court. They have only appellate jurisdiction for these kinds of cases, which means a lower court would have to rule, find against him, and then be appealed. We will see if any of the proposed cases actually wins in a competent court. My guess is that few if any will do so, and all of the cases that have actually been proposed (distinct from written about by partisans) would not involve enough votes to make a decisive difference in the election results. Nearly all of the cases so far filed have been shot down quickly, sometimes by Trump-appointed judges.

The Repub party doesn’t seem to actively support its president in his election lawsuits.

Moderate republican politicians for years have seemed to be gun shy about standing out.  Are they working to stay out of the crosshairs of the Dems?  Do they recognize an implicit or overt threat that Dems would mount a campaign to steal their next election from them?  Combine ballot manipulation with constant propaganda from Big Media?

Some are also afraid of the Dems gulag lists, pioneered by Stalin-AOC:

Donald trump was never well received by republicans he is in fact an independent.   The republicans just didnt have anyone to run.  But one who believes that media is not corrupt and govt is not corrupt is more ignorant than they know.. and that I can even imagine

you work for the corrupt govt or media.. you have two choices.   1. play along.. do as you are told, receive favors and riches..  2. have your career trashed, your assets taken,  your family or you harmed..

its not a hard choice for most.