Okay no real details on this but the chans (4chan 8chan) are going nuts about a Marburg type virus in a Chinese city. They called covid in 2019 (but they have predicted 45,697 of the last 3 global catastrophes).

This is a text box posted claiming it was one of the chans: 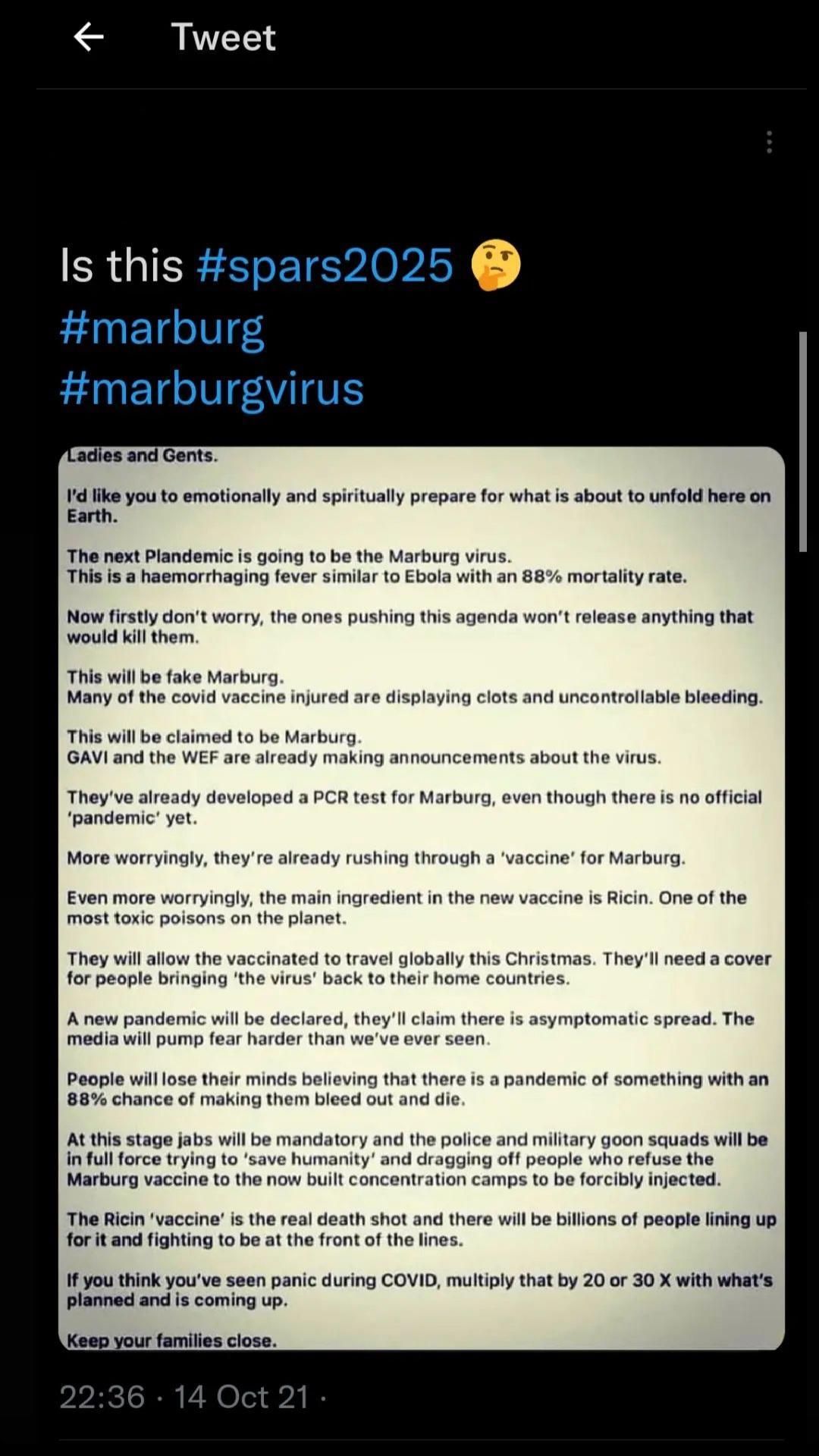 And here is a report from a site I’ve never heard of:

And finally hubby said he saw it on zerohedge but I couldn’t find it.

I’ve been seeing this reported as a hantavirus.  If that’s the case, it’s not good but not the end of the world either.

Now, is it really just yet another common rat-spread hantavirus outbreak and or is it something far worse?  There’s no real evidence one way or another.  OTOH, hantavirus is not uncommon in the area and these outbreaks have happened before.  For example, there was a small outbreak in Xi’an back in March 2020 that we mostly ignored, what with covid-19 breaking out just then.

Personally, I’m keeping an occasional eye on this one, but I have bigger fish to fry at the moment.  News stories on the matter (searching on “Xi’an”, “hemorrhagic”, “hantavirus”, etc.) seem to have tapered off since Christmas.  Cover-up or legitimately contained?  We’ll know in a month.

Flutrackers is also reporting something similar in Brazil

More than 300 miles away, the central city of Yuzhou is also under lockdown after authorities discovered just three asymptomatic cases there.

It’s the Oh-My-Gawd variant!  It’s so infectious even the famous Terra Cotta Army will get the disease.

Flutrackers is also reporting something similar in Brazil

Hoo boy.  It’s like one of those horror movies where, just when you think things have settled down, there’s a jump scare.  And another.  Then the whole way up the aisle and out of the theater, you’re bracing for one more “easter egg” scare while the credits roll.

I tell ya, I don’t know whether to sleep with a shotgun or a tube of ivermectin next to the bed.  Probably do both.

Steve Bannon interviewed Ben Harnwell again about this more recently; I posted his interview from 3 January in a Daily Digest thread.  He has received reports from people in the area regarding individuals who are bleeding:

About the China article, there may be more to the story than simply Covid Delta cases and a desire to achieve zero Covid before the Olympics begins next month.  HPHovercraft posted an interview in another thread, in which Steve Bannon interviewed Ben Harnwell, who thinks something else is going on, as he has received reports from Chinese people in that area.  Here is Steve Bannon’s whole program; the  report on China begins at minute 36:20 in the link below.  I also wonder if the recent urging of the CCP leader for the Chinese people to stock up on food could, in part, have something to do with this situation (~ 4 minutes).

Unless….and this where the politics and the ‘pandemic’ have a nexus. Unless, the next ‘pandemic’ down the pipe is really, really bad. I don’t mean in reality. I mean in terms of what they will say is reality. What about if it’s something like Marburg Disease? I’ve mentioned this disease as a possibility previously, as it has several things going for it. For one, the symptoms mimic a fair few of the symptoms of ‘vaccine’ injuries; severe bleeding, typically five to seven days after symptoms start, organ failure and blood abnormalities including low white blood count or low platelets and abnormalities in kidney, liver, and clotting function.

Also, there is a PCR test (8) (isn’t there always?), designed in 2018 – for a disease that has killed under 400 people since its discovery in 1967 – and a vaccine in clinical trials. I know – astonishing. Further, the NIAID is the owner of the vaccine and, best of all, the death rate is high; at the bottom end, 1 in 4 and, at worst, 9 in 10. So, Marburg Disease offers the double whammy of explaining the Covid ‘vaccine’ injuries (which may eventually become an issue that cannot be ignored) and terrifying the already terrified into staying home, indefinitely. Plus, leaving the vaccine ‘hesitant’ nowhere to turn. If you think there is plenty of othering going on now, can you imagine what it would like with Marburg’s?

I focus on this disease because others have already been doing so, including the WHO and everyone’s favorite sociopath, Gates. Gates’ GAVI published an article in April 2021, entitled Marburg: the next pandemic? (I did say that they weren’t subtle),(9) there has recently been an academic paper claiming that Marburg can be spread asymptomatically (10), funded by the NIH naturally, and because there was a case of Marburg in West Africa in August 2021 (allegedly) and that was the first case that close to the west coast.(11) It sounds suspiciously like a re-run, doesn’t it?

Let me re-iterate; it won’t really be Marburg Disease. It’ll be a another PCR ‘pandemic’, but I suspect a lot of people will fall for it, especially if the media decides it’s actually going to report on the catastrophic ‘vaccine’ injuries after all. And if a ‘pandemic’ is coming, it’ll have to be soon, because those injuries are already here. Wait too long and it might all come out and the Marburg ruse is dead in the water.

The lockdown of Xi’an might not have anything to do with COVID-19.  It might be a rodent carried disease which happens in China at this time of year.  From Vision Times :

Despite censorship of the news, locals suspect that the disease is directly related to a rampant rodent infestation, and many fear a possible recurrence of the plague.

The state-run Xi’an News reported that hospitals in the city have reported numerous cases of hemorrhagic fever since the beginning of winter this year. While medical experts point out that hemorrhagic fever is a common infectious disease in China’s north — which typically starts to peak in October every year — netizens have expressed concern that the outbreak could actually involve plague, a disease that has killed tens of millions throughout teh centuries, and which in 2019 claimed several lives in China’s Inner Mongolia region.

Hemorrhagic fever is mainly transmitted by rodents, the striped field mouse (Apodemus agrarius), and the Norway rat (Rattus norvegicus). Those who are bitten or come into contact with the blood or excrement of rodents carrying the virus may be infected, and serious cases may lead to death.

This is quite gruesome:

with videos showing [doors in] a neighborhood being welded shut.