This is about as far as it goes. What people would like is to see a sea change in government and corruption.

Ever since the coronavirus emerged in Europe, Sweden has captured international attention by conducting an unorthodox, open-air experiment. It has allowed the world to examine what happens in a pandemic when a government allows life to carry on largely unhindered.

This is what has happened: Not only have thousands more people died than in neighbouring countries that imposed lockdowns, but Sweden’s economy has fared little better.

That picture looks amazing.  It makes me want to be there.

How can they can go outside to the beach, enjoy life, get some more of that free that vitamin-D, all while seeing the deaths from this virus drop every single week?

Natural herd immunity.  Which they now appear to have.  As seen in the chart below. 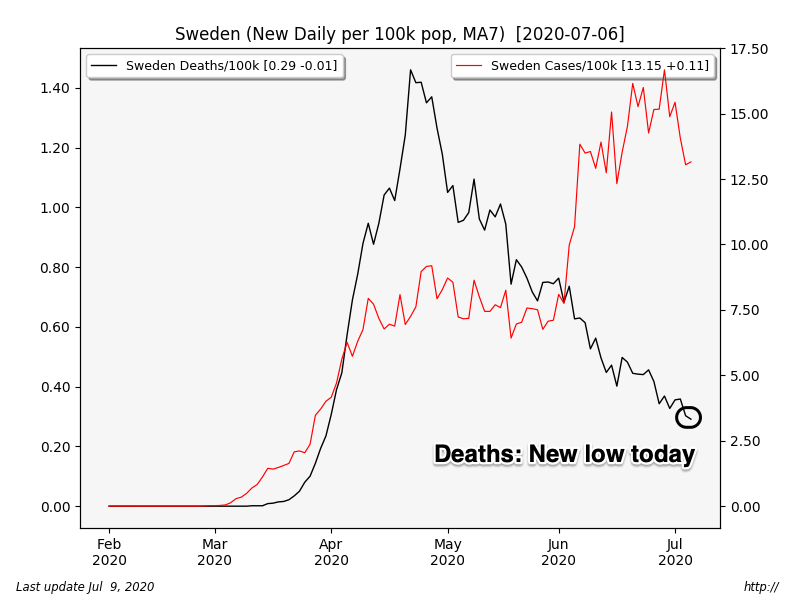 I appreciate a lot that you share data and not opinions about images one can have about Sweden.

As a Swede and living in Sweden, I get pretty annoyed with the propaganda exposed by “Nyhetersverige” on this website. That is just cherry-picking some data and putting a dark twist on its interpretation.

With this I’m not arguing at all that Sweden has a good way of dealing with this pandemic.

Being a member since many years, I so much appreciate the centered and fact-based approach shown by yourself, Adam and Chris.

DaveF, what is the data source for your graph, above?

I did some investigation myself as I wanted to check the Swedish numbers: I find the PC culture really scary. But as I do not want my prejudice to interfere with facts, I checked if the excess mortality follows the exact same pattern, a linear decrease. It does! (when one googles excess mortality one finds several information sources). I think that indeed Sweden did reach herd immunity in Stockholm.

Sweden, for all its PC culture, has decided to take a deliberately non-PC, non-herd-mentality approach to this pandemic.  They have totally gone against the international group-think. This took astonishing courage.  They sure took a lot of heat for it.  “Some people” seem to find the Swedish approach threatening.  (Where “some people” includes – my guess – the vaccine industry, who are generally want us all to believe that the human immune system can’t work properly without a needle in the arm).   I was initially concerned also.  I bought into the hype also.

But I have been watching.  The data suggests, Sweden has actually done well.  And now DaveDD has cross-checked with the all-cause data, and everything lines up.   Really awesome work, Dave.  So I think Sweden will be in better shape than most going into the winter.

[Certainly, I suspect some things could have been done better, in Sweden, and certainly in the US too, but – the US has decided to follow in Sweden’s footsteps, more or less, without explicitly saying so.]

Indirectly, the Johns Hopkins data.  datahub.io provides a csv file with all the important bits I can download every day.  I run each series through an MA7, then calculate the daily change, then divide by population.  Regional pop I get from the csv file.  National pop I get from an old CIA WFB I downloaded in 2017.  A little dated, but not too horribly off.

If it weren’t for the fact-free attacks on Sweden by forum poster nyhetersverige, I probably wouldn’t have worked as hard to surface this data, as rapidly.  Funny how things work out.

It is unfortunate we all can’t be working in an international, humanist way to deal with the pandemic.  I think most people around the world want that, but there is a small minority of not-so-nice people who are acting in a different way.

Uh no they didn’t.

This is a joke, right?

Thanks DaveDD and and Dave F for digging up these facts and doing the analytical work! 🙂

I am also very surprised that Sweden went in a different direction than the herd. I agree with your notion of a strong PC culture in Sweden. I guess that one reason behind this different direction was that the politicians had already before the outbreak given one government agency (similiar to CDC) ample authority to act. That meant there were very little of political meddling with the decisions to be taken in March and April. Another reason seems to be that at least the two main bureaucrats  running that agency (Anders Tegnell and Johan Carlsson) stands out as very brave and grounded in themselves. That is not my general impression of Swedixh state bureaucracy. Those two men seems to have got some of Dag Hammarsjöld’s stamina implanted in them.

I hope that this might hold a promise for an interesting future development of the Swedish culture. And that it is not just a strange exception going forward.

To dare to not be emotionally entangled when the herd moves is utterly difficult. From us as single individuals up to a nation and even the whole humanity. Thus, I once again want to express my appreciation of this more mental, and still caring, approach shown by you when sharing your data and analysis. Cheers!! 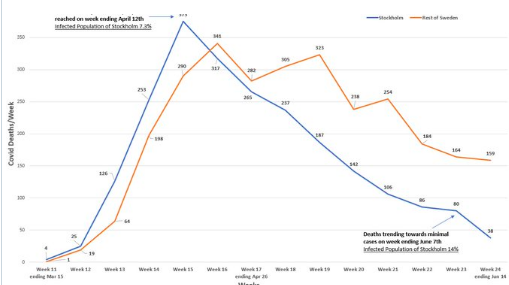 The shape of this graph is, to me, a clear statement that they have reached a slowing of the epidemic due to population immunity.

The worldometer.com website advises that Sweden has 543 deaths per million of population.  Pretty much on par with Europe in general.