The European Journal of Epidemiology published a new study indicating that there isn’t a definitive relationship between percentage of the population vaccinated versus number of cases of COVID-19. The study includes

There is a great graph there showing what we have already discussed here on PP – Israel has high percentage of the population vaccinated and a very high case rate.

Garbage in – garbage out.  This is garbage science.  Basically, I think it was an effort to show that the vaccine is not causing the surge in cases and deaths when it is. AND they know it.

Here are the major issues with this crap study.   Each country does have different therapies and standards of care.  For instance you cannot compare India with the US , and Japan as well.   You have different vaccines.  In general western counties, rich countries, or english speaking countries, or those with western medicine,  have different philosophies.   If you try to use lets say , china or even japan or Singapore, you would not get the same data , even if you vaccinated the exact same.

But the larger issue is the timing of vaccination.  You do, and we admit, that you get good , even great protection for a couple months post injection, then it fades to non existent, then it actually becomes counter protective.   When you map this curve , to this data.   Along with varying standards of care with therapies , such as countries who use anti-parasitic drugs routinely or prescribe them for COVID, you will get a completely different picture.   You cannot get a picture like you have in isreal , and say if we did the same with the same type of medicine, we will get a different outcome – we all know that  isreal is western medicine, and we get the same crap here.  However,  we all didnt rush to get the jab and make yellow stars and passport paperwork early on like this assholes did.   We are just beginning to see it in other spots , albeit its more mild, BECAUSE, we all didnt mass jab and do passport shit right away, we did voluntary stuff , then incentive stuff, etc.. and them more and more propaganda to coerce those that don’t jump first.

Bottom line, everything about this study is garbage.   It has to be , because I am sure of what is happening.

If Covid infections increase at a faster rate from greater socialization of the vaccinated than they decrease from the rate of new vaccination, I could see why a more vaccinated country full of people who now receive permission to congregate freely, may have more transmissions than a less vaccinated country still in lockdown.  This might even be true if vaccinations significantly reduce transmissions, something that has not yet been proven to happen.

read the last section of that paper, Interpretation. The paper seems to indicate that the vax is not the great savior they make it out to be,

It’s from UK NHS vaccine effectiveness reports, weeks 36-41.  X axis shows the weeks since the week when the rate of new vaccinations for a given age group was at it’s peak: 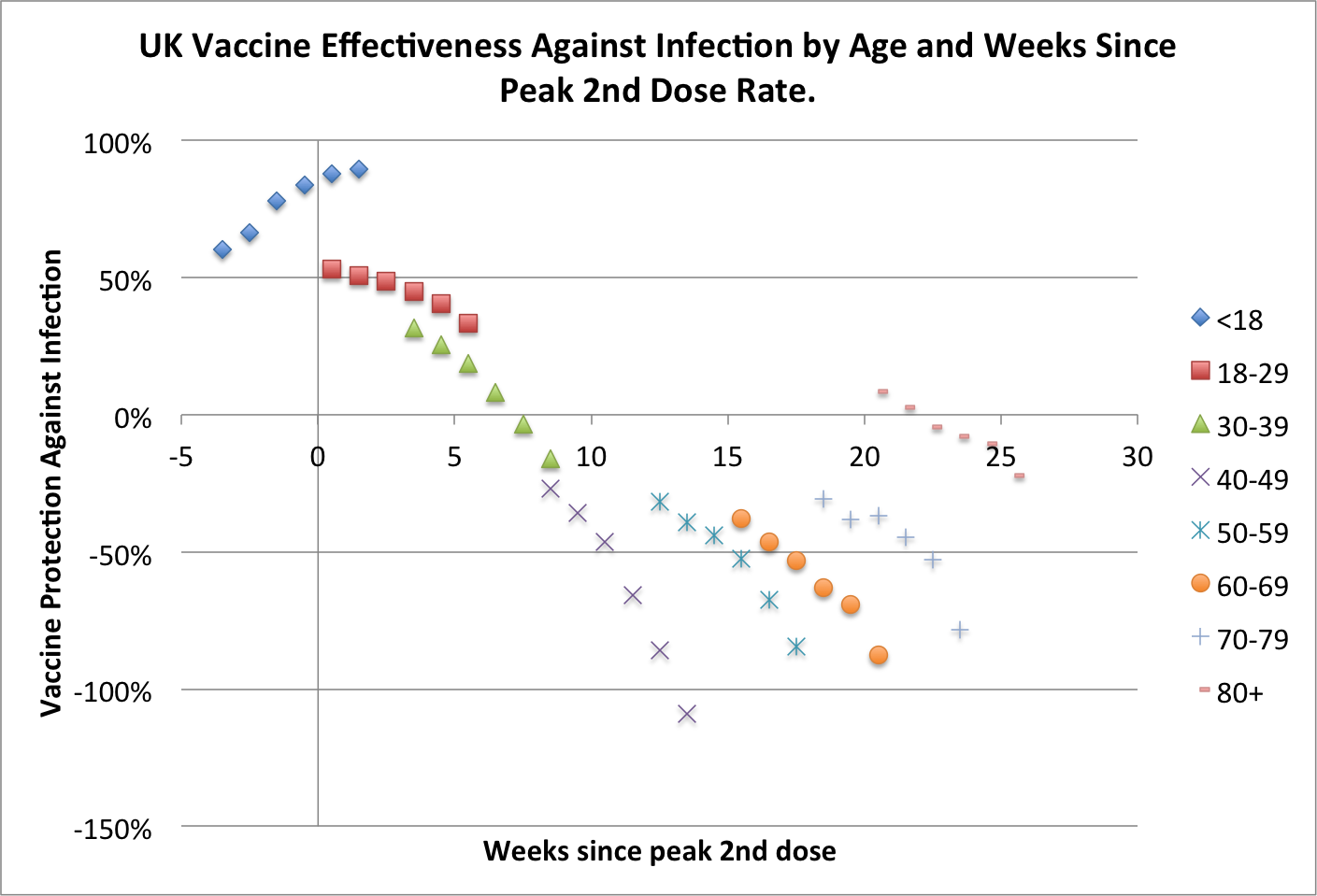 In the UK, the vaccine effectiveness drops to zero by about week 8 after the second dose.  After that, it drops more and more steeply into negative territory.  There is something different going on for elders – maybe more isolation?