According to an examination made by Stephanie Seneff, who works at the Computer Science and Artificial Intelligence Laboratory at MIT, and Dr. Nigh, who specializes in Naturopathic Oncology at Immersion Health in Portland, Oregon, was publicized this week in the International Journal of Vaccine Theory, Practice, and Research.

It also devotes considerable space to discussing the research of Dr. J. Bart Classen, who first published a research paper on the possibility of prion-linked brain degeneration caused by the COVID-19 vaccine a month ago, and expands on his research.

We have identified a signature motif linked to susceptibility to misfolding into toxic oligomers, called the glycine zipper motif. It is characterized by a pattern of two glycine residues spaced by three intervening amino acids, represented as GxxxG. The bovine prion linked to MADCOW has a spectacular sequence of ten GxxxGs in a row.

The SARS-CoV-2 spike protein is a transmembrane protein, and that it contains five GxxxG motifs in its sequence and, thus, it becomes extremely plausible that it could behave as a prion.

Recall that the mRNA vaccines are designed with an altered sequence that replaces two adjacent amino acids in the fusion domain with a pair of prolines. This is done intentionally in order to force the protein to remain in its open state and make it harder for it to fuse with the membrane. This seems to us like a dangerous step towards misfolding potentially leading to prion disease.

Pfizer claims the RNA fragments ‘likely… will not result in expressed proteins’ due to their assumed rapid degradation in the cell. While we are not asserting that non-spike proteins generated from fragmented RNA would be misfolded or otherwise pathological, we believe they would at least contribute to cellular stress that promotes prion-associated conformational changes in the spike protein that is present.

Prions were first described as the method by which Mad Cow Disease causes brain degeneration due to misfolding proteins in the body. The CDC notes that “prion diseases are usually rapidly progressive and always fatal.

Pfizer has dismissed statements and concerns that the vaccine can cause prion like illness.

Del Bigtree’s Highwire had an excellent (hour long) interview with Dr Richard M Fleming PhD, MD, JD.  He touches on the prion like structure in the spike protein (at around minute 22), but this whole deep dive was very enlightening.

Make some coffee, & give this a look.

I’m seconding watching this week’s TheHighwire. Much of it is jaw dropping.

Below graphic from the Del Bigtree interview of Dr. Fleming;

Dr. Fleming has his own website as well;    COVID-19 | Fleming-Method (flemingmethod.com) 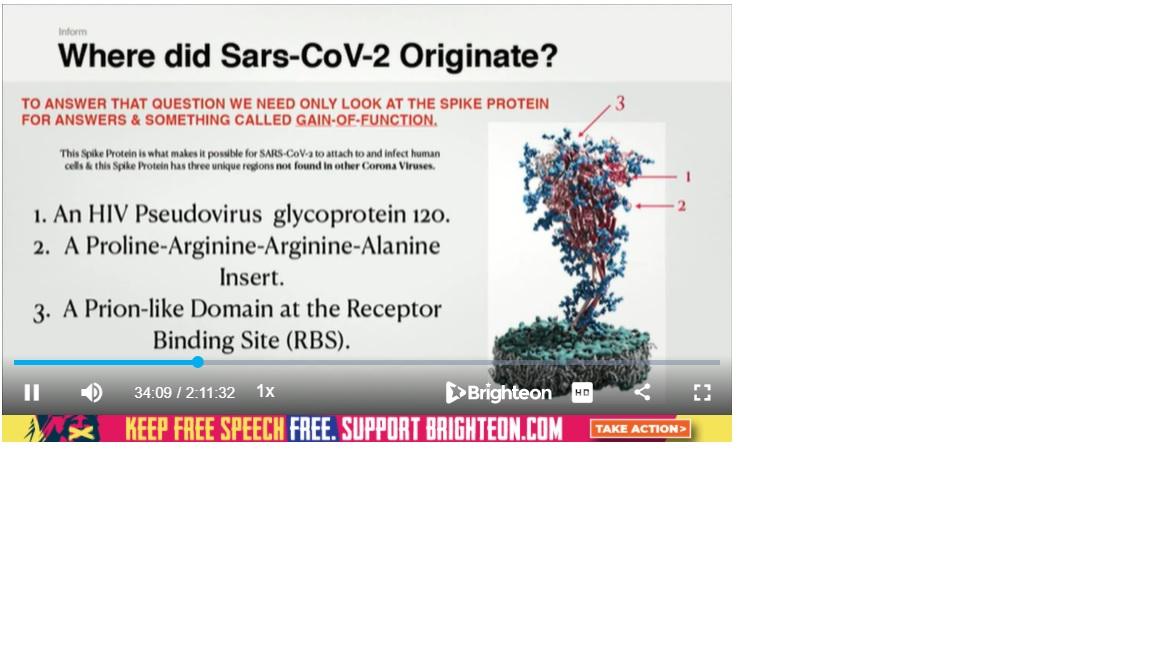 Dr Flemming is amazing.  AND yes the stuff highwire is doing now is jaw dropping

Must watch for everyone you can possibly get it out to And everyone needs to be familiar with the 3 insertions( and the schematic )  in the spike protein.

I just watched the podcast. Lots of stuff we’ve talked about at PP for the last year, but some new stuff as well. The part that keeps ringing in my head was that they tested the spike protein on GMO mice (have the human ACE2) and 95% of those mice died of spongiform encephalopathy (e.g. mad cow disease or Alzheimer’s) in 2 weeks. Dr. Fleming said that is equivalent to a year-and-a-half in humans. If this is true, we can expect major increases with brain diseases before next year is out – for those who got jabbed. Is that why they’re so insistent that people get vaccinated as quickly as possible?

I agree with all comments above….this is the most comprehensive look at Covid and the vaccines to date. Del Bigtree does an excellent interview….he is totally up on the subject matter and gets the most value out of his interview time possible. Please ….please share. And would request that Chris weigh in on the science…..

I did some sleuthing on that video.

Here is an interesting study from the Journal of Virology from 2007. The SL-CoV S referred to in the study is a virus found in “horseshoe bats.”:

Several important observations were made from this study. First, the SL-CoV S was unable to use any of the three ACE2 molecules as its receptor. Second, the SARS-CoV S failed to enter cells expressing the bat ACE2. Third, the chimeric S covering the previously defined receptor-binding domain gained its ability to enter cells via human ACE2, albeit with different efficiencies for different constructs. Fourth, a minimal insert region (amino acids 310 to 518) was found to be sufficient to convert the SL-CoV S from non-ACE2 binding to human ACE2 binding, indicating that the SL-CoV S is largely compatible with SARS-CoV S protein both in structure and in function.

That study took place more than a decade before the pandemic hit.

It was financed by China and the EU.

If that doesn’t knock your socks off, nothing will.

On the other hand, in 2009 Fleming had pled guilty to fraud charges.

Fleming notes this on his site and claims that this was a political witch hunt.

But would your thinking change, if it were proven that thousands of individuals are wrongly convicted by a system often indifferent to innocence and judicial error? Devoid of accountability? That DC’s profit-laden “opportunities,” fronted by the yeast-like politically ambitious, often lead to the indictment of those who dare challenge the narrative?

Political prosecutions (and non prosecutions) do happen but I don’t claim to know the background behind this.

But one of the charges that Fleming pled guilty to was Mail Fraud. That is a charge that had been used by Federal Prosecutors in such a vague and broad sense that a lot of people were being threatened by federal prosecutors with years in prison based on vague charges of “mail fraud” wrongdoing. The Supreme Court (in 2010, after the Fleming plea) eventually had to step in and limit the expansive way in which the Justice Department was using it.

Going forward, the Court’s decisions should resolve the longstanding controversy over the scope of federal criminal fraud provisions by defining exactly what conduct is illegal under § 1346. Unless there is proof of bribery or kickbacks, prosecutors can no longer rely on that provision to pursue corporate crime and public corruption.

I have been encouraging folks to watch Del Bigtree’s weekly broadcasts. Every Thursday afternoon live, and then available on his website TheHighwire.

FDA has NEVER previously approved a vaccine based on a placebo study. (Bigtree and Bobby Kennedy proved this in federal court a couple years ago.) To the extent placebos were used for the mRNA vaccine trials it was strictly because of lawsuit(s) that Bigtree and Kennedy brought. He is one of our major watchdogs in this C19 vaccine movement.

Thank you for this link/discussion.  The Flemingmethod.com deserves it’s own thread.   Perhaps the most powerful, truthful, and science supported discussion on  Covid to date.  A MUST watch…and share.  It is vital we spread the truth about Covid    Murderers must be held accountable!