In my copious free time, I came up with some data from the VAERS csv files.  I now know how to run little mini spreadsheet database queries on tables.  Boy, the things you can do with excel.  (Or – rather – OpenOffice.  Microsoft = bad.).  Anyhow, here’s what popped out when I reviewed the records. 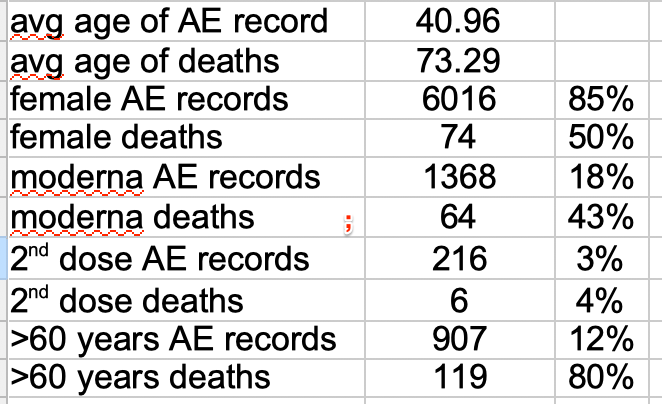 Most of the AE (Adverse Event) records were for females: 85%.

What explains the surprisingly strong female presence in the AE records?  I don’t know.  But the Moderna vaccine sure looks more deadly – like more than a factor of 2.  I really need to know how many vaccines were administered at the time to get the proper denominator.  I’m using “# of total AE Records” as an imperfect denominator now.

The really fun part: I didn’t bother looking at this data until they tried to make it difficult to find.

And this is the REPORTED adverse effects, right? I.e. mild-to-moderate adverse effects are generally not reported, and even some moderate-to-severe ones are going to be ignored by medical doctors due to their indoctrination, correct?

Long-term low-level poisoning and consequent immune system damage is not accounted for, only immediate effects, right? So if you die 10 days later, when causation is harder to establish, does it count?

And it covers which countries?

Generally speaking AERs are underreported and they really don’t operate well if the time between administration and effect is > 1 month.

For that you need good epidemiological surveillance to detect if Group A is responding differently than Group B or if there’s any above trendline deviations from certain baseline rates in things like heart attacks or deaths.

So if there’s any down-stream effects we’ll only know about those if there’s really good tracking/surveillance happening.  What do you think the odds of that are here?

Looking at raw data….saw many consecutive reports up to 6 in a row….indicating that the adverse event wasn’t due to the peculiar individual, but more to the lot of vaccine and maybe to the handling of the material. As I understand it one vial will do multiple individuals. If there is an adverse event all from the same vial it indicates problems with either the quality of the vaccine or the handling of the vaccine.

Harvard University worked out that only about 1 % of adverse reactions are reported to VAERS.

One trick that manufacturers have to hide an apparent reaction related to a bad lot is to split up lots and ship them to as many locations as possible. Because people from one part of the country do not tend to randomly ask someone at a distance what their experience with a particular lot has been.

Kind of what I was thinking after reading about this event recently.  Seems to point to a handling/prep issue, but who knows.

A cluster of allergic reactions that prompted California to halt the use of hundreds of thousands of doses of coronavirus vaccine has thrown another wrench into the state’s struggling vaccination rollout, forcing some health care providers to cancel clinics on Monday.

The development stems from one batch of Moderna vaccines apparently linked to severe allergic reactions in six health care workers who received shots at a mass vaccination site at Petco Park, the Padres’ baseball stadium in San Diego last week. The California Department of Public Health on Sunday issued a statement recommending that health care providers stop using vaccines from this batch, which arrived in California between Jan. 5 and Jan. 12.

“What explains the surprisingly strong female presence in the AE records? ”

Thanks, Chris, you are a COVID hero.

My understanding is that after the vax manufacturers got emergency use authorization they claimed to feel obligated to give the vax to the unvaxed people in the control groups of their safety studies : (

Instead they could have used the same criteria for members of their safety studies as is being used in the general public–healthcare workers are first in line, low risk folks are last.   That would have provided side effect data for a bit longer.

I’m still pissed that they did not do concurrent animal studies for most of the vaccines –if I understand correctly.   They might have gotten some interesting data due to the shorter life span of the animals and ability to study offspring.

They don’t make the system reassuring to intelligent, informed people.  They so often do things that look like a coverup.  The dumb sheep in the public get fed half-baked sound bites.

The CDC “wonder” query system is back online, after 3 days of “back in a few hours” downtime.  That said, the number of records hasn’t changed; we haven’t seen any new records since January 15th.  Hey, but what’s the rush?  Its not like we have a mass vaccination program using an experimental product that has never been tried before in human history or anything.

My parents got the second jab yesterday of the Moderna vaccine. My father said his arm really hurt all night at the injection site. My mother had no reaction. I suggested that he should report it and he had zero awareness that there was a mechanism for reporting Adverse Events. Obviously the medical authorities are not telling everyone about the adverse reaction reporting.

Or “putting ourselves first”, as the CDC is actually a vaccine company: