Sam Harris recently run a podcast with Andrew McAfee regarding his recent book More from Less: The Surprising Story of How We Learned to Prosper Using Fewer Resources―and What Happens Next. One of the book’s main findings is that ‘In America, the United Kingdom, and other rich countries, we are past “peak stuff” and are now using fewer total resources year after year.’ He calls that phenomenon “dematerialization.”

As for which are the “other rich countries” that are past “peak stuff,” I don’t remember if he mentions them (but he does mention that one big problem with many countries is that the resource consumption data is much sketchier, so it’s hard to draw conclusions).

You’re probably thinking that offshoring hides the true increase in resource consumption. He has this to say on that front, “The USGS does not track imports or exports of resources contained within finished goods. So the copper found in computers and smartphones imported into America in 2015 is not included in the apparent consumption total for that year. Even if all this copper and other such resources could be tracked, they would not change the overall conclusions about dematerialization. Net imports of resource-heavy finished products are only a small part—less than 4 percent—of the overall US economy.”

He says that one reason some countries are post-peak in many important inputs is that digital technology (and tech progress more generally) is enabling corporations to save on raw materials even as we consume more products.

Interesting tidbit about US farming: “Between 1982 and 2015 over 45 million acres—an amount of cropland equal in size to the state of Washington—was returned to nature. Over the same time potassium, phosphate, and nitrogen (the three main fertilizers) all saw declines in absolute use. Meanwhile, the total tonnage of crops produced in the country increased by more than 35 percent.”

He is very pro-capitalism, but he says that capitalism can’t deal with externalities, pollution in particular, and that it needs public awareness and a responsive government to deal with those (responsive to the people and responsive to good ideas), discussing at length how these forces complement each other to create more from less.

He doesn’t expect developing countries to trash the world as they develop, because he expects them to bypass a great deal of 20th century technologies and go right into 21st century ones. So he doesn’t see growing populations as an environmental problem.

He discusses the 2010 rare earths scare when the Chinese gov restricted exports, and industries in many cases replaced them with cheaper options, and he says that we can continue doing that with other materials as they become scarce and more expensive. He thinks that even though the world is finite, we’re in no danger of running into limits to growth so long as we allow tech progress and capitalism to continue to reduce our total consumption of resources in more and more countries, while public awareness and responsive government curb externalities like pollution.

He also presents peak oil as a peak oil demand event, citing one scenario by Shell. I think the treatment of peak oil is too brief and biased. For all I know, it could be either a peak demand or peak supply event, and his evidence for the peak demand theory is weak.

He expects continuing improvement overall in human quality of life well into the future and no drastic and permanent energy and environmental shocks of the kind forecasted in the Crash Course. My thinking is that even if his basic assessment and predictions are correct, governments can still run into a lot of trouble due to economic issues that he doesn’t discuss at all, like underfunded entitlements, runaway deficits and maybe high inflation and currency devaluations, too much debt, asset bubbles, etc.

I was still surprised to hear a coherent, rational and research-backed argument for why the future could, overall, be better on average (for humans only, obviously not for animals suffering in factory farms). I’m not as confident as the author is that the future will be that bright (having been consuming futurology for almost 8 years, I’ve learnt that it’s easier to be wrong than to be right forecasting the future), but it looks pretty plausible.

It’s worth a read.

(By the way, I’ve read the two PeakProsperity books and I’ve watched the Crash Course -old and new- a bunch of times, so I’m aware of Chris’ arguments, and I think some of his future scenarios are pretty plausible too.)

I always wince a bit when these optimistic scenarios come out because, as Mark Twain is said to have quipped, “A lie can travel half-way round the world before the truth can even get its shoes on.”

Lies and misused statistics can have a lot of similarities even if the intent in their use is different.

Let’s take a closer peek at one of the claims:

Interesting tidbit about US farming: “Between 1982 and 2015 over 45 million acres—an amount of cropland equal in size to the state of Washington—was returned to nature.

Over the same time potassium, phosphate, and nitrogen (the three main fertilizers) all saw declines in absolute use.

Meanwhile, the total tonnage of crops produced in the country increased by more than 35 percent.”

First, here’s the cropland data from the USDA covering that time frame.  Let’s just look at the harvested acreage (while mentally noting that having less summer fallow land is not a good practice): 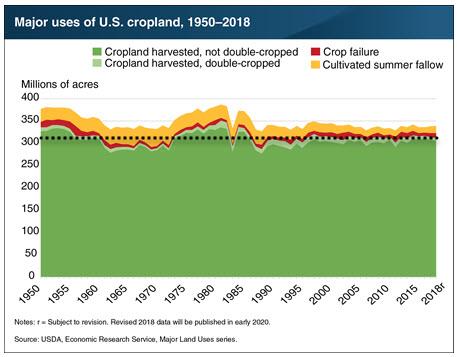 Hmmm…why 1982?  Looks like he took a temporary peak in farmland usage and then chose that as the “baseline.”  Just reading the words one could come away with the impression that there’s a set of trends in play; less land, less fertilizers, and more output.

If, instead, he chose 1972 (or even 1983) his argument would have had to go the other way entirely because there are more acres being farmed today than in 1972 by roughly the same margin as his cherry-picked data.

Otherwise we might observe that the amount of farmland under cultivation has been pretty much dead-flat since ~1986.

Given the above chart, his decision to baseline to 1982 is deceptive and misleading.

Next we need to look at the fertilizer data: 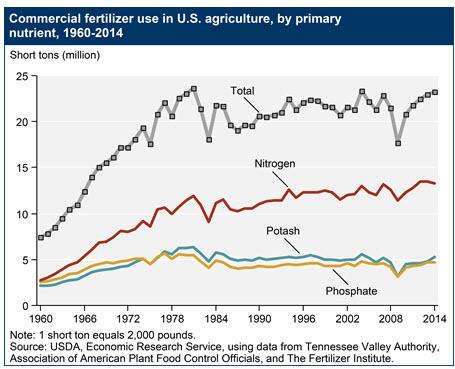 Hmmm….that’s odd.  I actually see rising nitrogen use across the entire time series where total crop land has been flat (1986 to present).  Potash and phosphate appear to be flat.

This runs dead counter to his claims of declining absolute use.

As far as I know, the USDA is the best source for this data.  If there’s another, I don’t where it might be.

Given that, I think his claims of declining absolute fertilizer use are demonstrably wrong.

Where he’s spot-on is in noting that we are getting more output from an acre of land.

Here’s corn as an example: 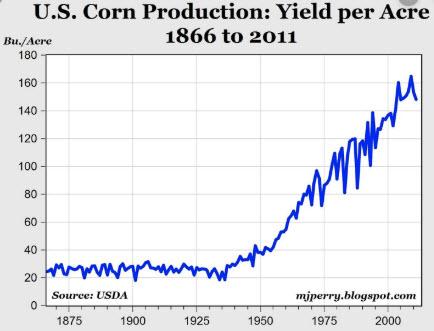 That line begins to trundle up in earnest right after WWII when Haber-Bosch nitrogen became widely available.

Another contributing factor would be irrigation.

A third would be advances in strains and genetics.

A fourth would be improvements in farming practices.

All four of those major factors contribute to that rising line.  It would be a mistake to simply keep extending that line up and to the right.

Because the first two – fertilizers and water – are non-repeatable gains.  Adding more water to an already adequately irrigated field does not improve yields.  Ditto for fertilizers. So those would have to be normalized out of the data before any trend extrapolation could be applied.  What’s left would be advances in genetics and practices.

The slope of that line will be less than the slope of the prior line because two gigantic factors would be removed.

Bottom line:  I really dislike having to parse through futurology/optimism arguments to discover where they’ve been fast and loose with the data and/or interpretations.

I am pretty sure that if I went through more of McAfee’s claims I’d find other such debatable, questionable, or otherwise spurious claims.

Which is a shame, because I think that there are positive trends to surface and it behooves any and every would be proselytizer to not hand their potential detractors any free ammunition.

All it takes, sadly, is one bogus argument to make the rest – no mater how solid or worthy – seem less attractive or even outright fraudulent (fair or not).

Chris, I understand your frustration. I can imagine you having found similarly disappointing discrepancies many times before when looking into optimistic claims.

While the choice of 1982 as baseline is certainly flattering to the argument, I think it makes sense that if one is discussing whether the country is post-peak in certain quantities, one would choose a peak to baseline to. Since that peak, the country has indeed been getting more crops tonnage from less land. I agree with you that it is unfortunate that if one reads too much into the text, one could get the impression that the trend in cropland used is down when it’s actually relatively stable.

Putting his quotation in context, it turns out that he does acknowledge that 1982 was the peak in total cropland and that the increase was quickly reversed. Book:

America has long been an agricultural juggernaut. In 1982, after more than a decade of steady expansion due in part to rising grain prices, total cropland in the country stood at approximately 380 million acres. Over the next ten years, however, almost all of this increase was reversed. So much acreage was abandoned by farmers and given back to nature that cropland in 1992 was almost back to where it had been almost twenty-five years before.

This decline had several causes, including falling grain prices, a severe recession, over-indebted farmers, and increased international competition. A final factor, though, was the ability to get ever-more corn, wheat, soybeans, and other crops from the same acre of land, pound of fertilizer and pesticide, and gallon of water. The material productivity of agriculture in the United States has improved dramatically in recent decades, as we saw in chapter 5. Between 1982 and 2015 over 45 million acres—an amount of cropland equal in size to the state of Washington—was returned to nature. Over the same time potassium, phosphate, and nitrogen (the three main fertilizers) all saw declines in absolute use. Meanwhile, the total tonnage of crops produced in the country increased by more than 35 percent.”

I think the more serious problem is with fertilizer use. Andrew bases his data on USGS data, which measures apparent consumption of ammonia (nitrogen), potash, and phosphate rock across all uses in the US, while the USDA measures commercial fertilizer used in agriculture only.

While his NPK claims are indeed true regarding USGS total use data and the US seems to be post-peak in apparent consumption of all 3 products, the claims are not true when non-fertilizer uses are excluded.

According to the NY State Government, “About 80% of the ammonia produced by industry is used in agriculture as fertilizer.” Since Andrew’s paragraph is about crops, we should not be concerned with the 20% that’s not used as fertilizer for that comparison, given that we don’t know how that percentage has varied over time. Potash and phosphate rock also have other uses besides fertilizer. I don’t know how he could have missed the USDA Fertilizer Use data, since he does cite USDA Major Land Uses data (in the document I linked to before), and both are in the same USDA ERS All Data Products list.

Thank you for your insights.

Thanks for posting this, and the detailed reply. Great discussion! I’m going to read this book and look for more responses “out there”. So few have even given a thought to the possibility of a  decrease in growth in our bubble world, and it’s a shame.

Obviously, something is not going well. “The Verdict Is In: Farm Bankruptcies Up in 2019”