Please look at these articles and tell me why we aren’t hearing more about this. Is it the source?  Sounds very exciting.

It seems interesting, But it is likely just circumstantial at this time.    Look, I would like to be optimistic,  But there are more studies – not just the theory – that show that immunized people actually are less protected against a novel virus for which they are not immunized.  So unless, there is some similarity in those viruses, i see it only as a co-incidence.. I certainly dont recommend anyone challenging someone with the virus to prove this – This would put a nut in the deal for mandatory vaxxing.       I do believe some illnesses confer  immunity for others – hence , small pox.   But heck where are the similarity of MMR with coronavirus..  ZERO- nada..  You would have at least hypothesize some logical explanation for it for me to come close to biting on it . In the mean while its just bogus propaganda .. sounds good.. but it doesnt pass my litmus test.

I got to further thinking how dumb this really is.    Because, even if a population was not vaccinated , if didnt killya,  you got immunity from the disease.. hence the antibodies – what the vaccines give you..  So,  a lot of these older people never vaccinated.. HAD the disease already,  SO, they dont need the vaccine.. There would be no reason to get the vaccine.   Unless they are slipping something else in the recent vaccine to push mass vaccination .. because they have the cure for the disease they created.

I cant stop my head splinter from this.  It really disturbs my logic.  You know thinking more,  they said the reason people were dying wiht this is because they mostly have co-morbidity.  So, I guess that is not why they died – its because they didnt have the MMR vaccine.. Infact , I guess for some reason not getting the mmr vaccine causes co-mobidity.. SO lets all race out to get it.

Tropical island is probably not an ideal place for SC2.  I’d want to compare vs other tropical islands.  HI has done really well – is much more dense, has a lot of tourists, and I don’t think that’s due to the MMR vaccine.

Heat & Humidity.  And probably a lot of sunshine. 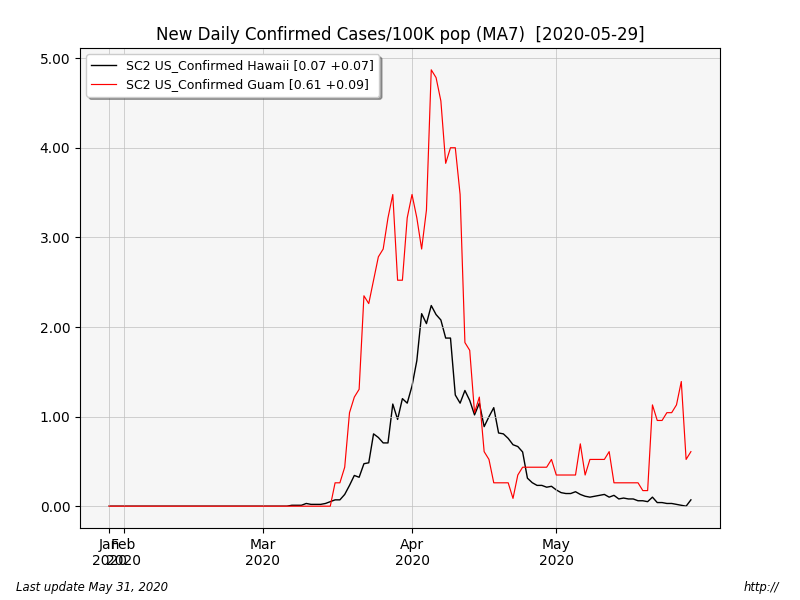 Not sure if its weather based so much as flu – where heat and humidity makes it much harder for the influenza virus to spread.  Cold viruses are not so much affected this way.   But colds in general, are less prevalent still during summer  ( but still seem pretty prevalent the rest of the year )  So, perhaps with a tropical climate – not like what we are seeing in the southern hemisphere – but more tropical.. where there is no seasons,  it seems to be doing a lot better in general.   Even norther italy had much more difficulty than so italy.  So perhaps there is something about those zones.

The other thing to note is these are much smaller populations,  your sample size is not enough infected to give you good numbers..  Again , we are probably missing a good amount of cases as deaths as well. But when the sample gets very small.. the death rate will be hard to see.

I just dont believe that a vaccine for a totally unrelated virus can confer protection for another unrelated virus.   That is like saying heck – go slam down a bunch of infections.. you will be immune from HIV..   one of them has to confer immunity.. and heck if  I get a enough flu vaccinations, I will never get a cold..  This logic is right up there with the dumb-bunny thinkers – that say, give me antibiotics when I have the flu..

I think we heard similar with the BCG(TB)  vaccine.    However,  there was some thinking and science with this – the way it worked and the action the antibodies have the surfacant of the lungs..   So, not so much as you are getting immunity from the virus but one small affected lung function,  has immunological training,  from a previous infection.. So its more like turning on the gas for an immune response in on site of the lung – which happens to help with the immune function of this one lung site.      As I said , with vaxxing, you are over or under training the immune system..  there could be some benefit.  But corona virus is a respiratory illness as is TB.   I would have to see how rubella or measles relates to immune function of this virus..   Again, I am not sure how much protection the BCG vaccine provides if any.. It was just a theory.  But , that looks like it went by the way side too.. why no more on this?    The truth is basically, they dont want cure that already exists for this – they have the in HCQ.   They want an expensive new drug.

But a new poster talking enthusiastically about a big pharma vaccine product being the sauveur du jour…makes me a teensy bit suspicious.

Maybe they can “encourage” the NIH to fund one of those gold-standard RCTs, and then they can come back to us when it is done.

Injecting yourself with aluminum and other toxic adjuvants contained in vaccines, could only make you MORE susceptible to SARS-CoV-2 or any other pathogen — obviously (if you aren’t under the spell of the big pharma cartel).

If you haven’t seen it yet, watch VAXXED. There is NO EXCUSE to falsely claim that the MMR vaccine (and any vaccines with similar adjuvants) doesn’t cause autism. There is simply no excuse to remain ignorant. Vaccines are not “injected attenuated pathogens” — their contents reveal them as nothing less than bioweapons.

Even the study of the few vaccination we give our dogs show – an 80% reduction in immunity in dogs compared to healthy unvaccinated controls.. and imagine how many vaccines a 5 year old recieves compared to your average large breed dog that is 2-or more times the average weight of 3-5 year old child.