According to the BBC, the lights have been out across Venezuela for days now, and it’s playing out like one would imagine:

Venezuela’s government has ordered schools and businesses to remain closed on Monday as a power cut drags into a fifth day. The opposition says at least 17 people have reportedly died as a result of the blackout. Residents in the capital, Caracas, told the BBC’s Will Grant of their growing despair.

Each hour that passes without power in Venezuela brings more havoc and stress to a country already on edge.

Pro-government motorcycle gangs, known here as “colectivos”, roam the dark streets enforcing order at gunpoint while there were sporadic episodes of looting amid the desperation.

By its very nature, a clear picture of the blackout has been difficult to obtain over the past four days.

Many parts of the country are still cut off and it is hard to get a full account of their situation. Even when the electricity returns, it is often patchy and only lasts for a few hours before dropping out once again. 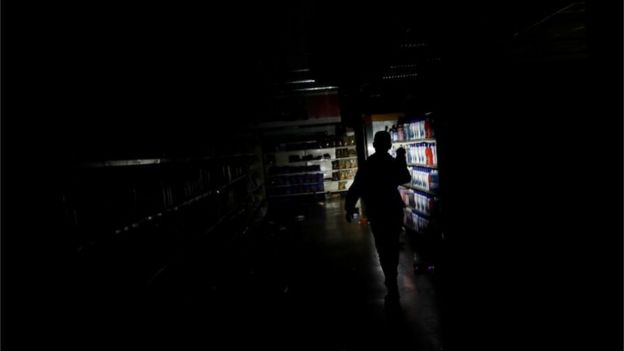 What is clear, though, is that since the power outage hit on Thursday, huge swathes of Venezuela have been struggling to cope.

Without internet, mobile phones, banks, credit-card machines, electric cookers or air-conditioning, ordinary life is bordering on the unbearable for many people, especially in low income communities.

Little wonder some are ready to snap. “I have a two-year-old son. Yesterday evening there was nothing to eat,” Majorie says, visibly angry outside a supermarket in the Terrazas del Club Hípico neighbourhood in Caracas. 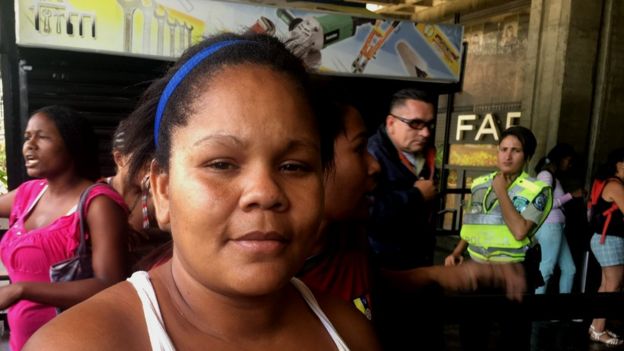 A shop near her home was looted, she says, and a neighbour gave her some boiled rice.

“I liquidised it, added a little sugar and fed it to my son. But today when he asks me for food, what am I going to give him? I can put up with the hunger. As adults, all we need is a glass of water. But what’s a child supposed to do?”

Behind us as we speak, a group of mothers, equally desperate and distressed, start to bang on the doors of the shuttered supermarket, demanding to be let in.

Inside, the cash registers and card machines were not working and the staff were only accepting US dollars in payment.

“We don’t use dollars in this country, we don’t earn in dollars, we earn in Bolivars”, says Majorie, her voice rising once more. “We don’t want to loot stores, we don’t want to cause problems. What we want is food. We’re hungry.”

For others, the issue is even more grave than a chronic lack of food. 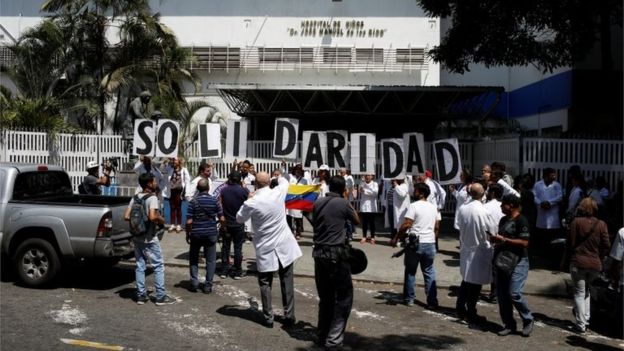 Patricia (not her real name) works as a lab technician in a children’s hospital in Caracas.

Worried about getting into trouble for speaking out, she meets me at some distance from the JM de los Rios hospital to talk about the impact of the blackout on the patients.

“On Thursday, no-one had any information as to why the emergency generators didn’t start, what was happening or why everything was still dark in the intensive care unit.” A colleague told her that the children in that ward were being kept alive by manual respiration. 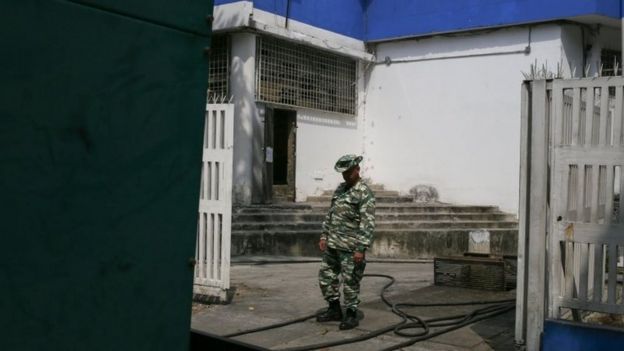 “As we walked through the ward, we saw a mother crying and we found out that one of the babies in intermediate care had died”, Patricia explained.

Despite the best efforts of the medical staff, one of the newborns in the neonatal ward died later that first night, too.

A generator was eventually delivered to the hospital, but in a sign of the chaos reigning during the blackout, it was delivered not by health or government officials but by the feared colectivos.

No money, no funeral

And it is not just food security and healthcare which are falling apart, even laying someone to rest has become almost impossible.

María Errazo’s son was killed in the poor neighbourhood where she lives on Thursday, when the power cut first hit. Since then, his body has been held at the Bello Monte morgue. 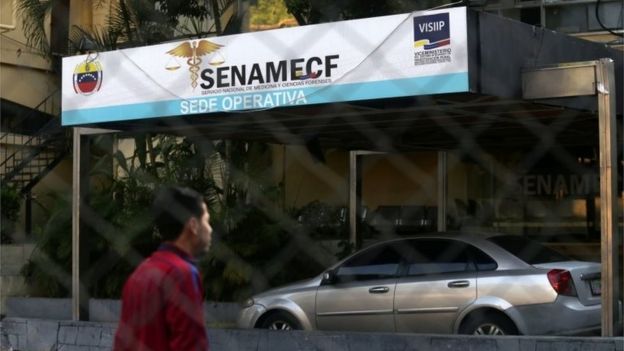 With most government offices closed since Thursday afternoon, Ms Errazo has not been able to get hold of the required paperwork to view her son’s body or to have it released for burial.

And because the few offices which are open cannot print or connect to the internet, she has not received official confirmation of how her son was killed either.

But even if Ms Errazo could bring her slain son home, she could not afford the funeral. Venezuela’s rampant hyperinflation has wiped out the value of the little savings in Bolivars that she has.

“We don’t have the money,” she says stoically of not being able to lay her son to rest. Banks are closed and there is hardly any mobile phone coverage. “I can’t even make calls to try to find a solution,” she says.

As night fell, we got word that the same supermarket we had visited in the morning was being ransacked. 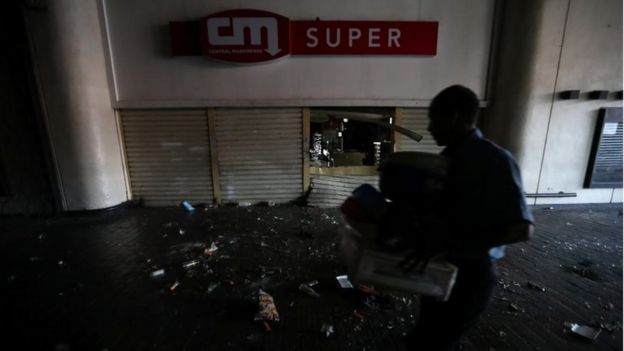 We rushed there, arriving in time to see dozens of local people being detained and their mothers, wives and daughters hysterical with rage at the National Guard.

“What were we supposed to do?” screamed one woman at the guardsmen. “Our grandkids are dying of hunger.”

Her urgent plea marked the end of another day in Venezuela’s chaotic descent into darkness.