We decided at 4 am that waiting it out in santa rosa not safe due to traffic. We had a relatively easy time getting out of to bodega via 12, but 101 closed northbound and crawling southbound. Still waiting to hear if our neighborhood safe….
It feels like a slight breeze off the ocean has cleared the air here considerably. Meanwhile ash on the outdoor table…35 miles west of bennett valley.

Luckily my husband had some 3M N95 masks in the car. He picked some up after getting caught in a sierra wildfire few years back while fishing. Earlier today you definitely needed a mask to be outdoors. Now we are drinking beers on the patio swapping gallows humor with friends who have lost their homes via text.

Strange days. We expect to be here at least another 24 hours. Incredible seeing the lists of neighborhoods and local businesses that are no longer. I was prepared for an earthquake, but only marginally for a fire. Getting woken from a deep sleep makes your thought process less than stellar. Getting all sorts of offers for housing with friends if we do lose our home.

Years ago when I read ‘Little House on the Prairie’ I was deeply impressed when the father set fire to the fields around the cabin to eliminate fuel for the approaching brush fire. Jack Spirko from ‘thesurvivalpodcast.com’ recounts how a neighbor who owned a bulldozer for his work created firebreaks to protect the neighbors as a forest fire was headed their way.
Winds cannot be overestimated. In a downtown fire in my hometown a number of buildings blocks away were affected by blowing chunks of burning embers.

I am so glad that the loss of life has been nil. Fire is a strange bedfellow: without it we would have not even learned to cook food or make warm homes in winter, let alone have all its benefits today, but when unleashed in peace or in war it is a monster.

I'm lucky.  None of the fires are anywhere near me, with all of them at least 100 miles away.

I just hope everybody else is OK from here on out and these things get put out fast.

Every Tuesday I check out the University of Nebraska’s drought monitor web site:

As of last Tuesday, it showed a 6 month average drought free northern CA.  During last winter, the web site’s map showed a normal (white) level of precipitation in the entire northwest.  Then in June a dark red (drought) spot starting to form in eastern MT.  That reddish drought region then spread west pretty quickly.

Back in the 50s my family lived near Napa.  I remember it being very comfortable all the time.  I then traveled up there 10 years ago.  I couldn’t believe how hot it was.  It was almost as bad as where I now live in Tucson AZ (hopefully not for long).  I was surprised not to see dying forests like I do in the 9000’ high mountains near Tucson.  I wonder what the unburned CA ones look like now.

I have friends who had to evacuate their remote homestead site in northwest MT last month.  Last winter’s snow was above average, but the June summer rains did not come in.  In a matter of a few weeks forest fires were burning everywhere in the northwest.  Fire retardant was being dropped all around them when they left.  Luckily, their place did not get destroyed.

Most Cell Phones have the ability to make calls on WiFi if you have it enabled. Verizon and AT&T definitely allow this on iPhones, but you do have to enable it in your preferences. This way if you have WiFi but no Cell service you can still make and take calls.

During this time, Comcast has opened it's normally closed WiFi networks to the public to enable such calls. The Internet by design is a much more robust comunications system than the regular phone networks.

Here is a link to the Apple support page on enabling WiFi Calling:

Here is a link to an interactive WiFi Network Map for Comcast. Normally closed except to customers, it has been opened to all until further October 13th:

Non-subscribers to Comcast will need to pick the “xfinitywifi” network name from the list of available hotspots, launch a browser, and locate the “Not an XFINITY Internet Customer” section on the sign-in page to get started. 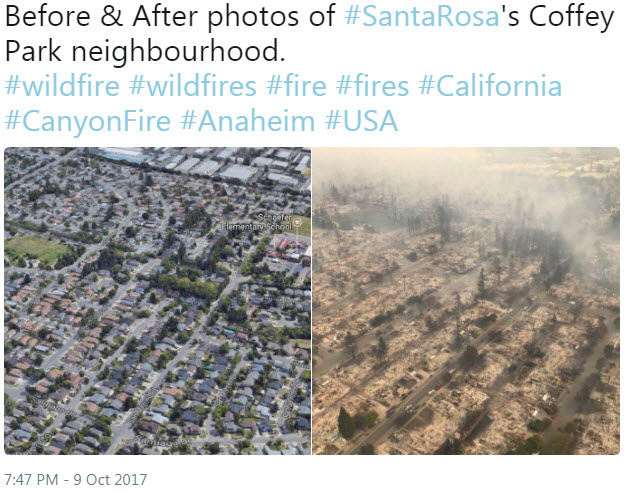 Thank you for sharing the Bush Fire Plan!  I am an Emergency Manager in New England and I like to point out to new residents that we live in a 50sq mi matchbox during droughts.  While we have been prepared with our BOBs for years most folks don't prepare to evac on a moments notice.   Here's a prayer that those fires get under control soon!  I have family and friends in that area of Cali and I haven't been able to reach them this weekend….   🙁

As an asthmatic I only use N95 to filter out minor interior dust particles.  We have two painting resperators for use in emergencies such as a forest fire.  The fit is much tighter than the n95 filters that most folks get at the pharmacy or WalMart.

Stay safe!  Leave early!  Call family!  Avoid the rush for essentials by stocking up in advance of need.

By Monday, more than 18 fires had burned a total of 80,000 acres across at least seven northern counties, including Napa and Sonoma, in the wine region.

That's a huge set of fires.