My friends were in the Oakland fire a few decades ago, were given five minutes to pack by Oakland FD, lived, but lost everything and rebuilt. That was pre prepper mentality so they were really surprised and at a loss as to what to take.

Hi Rector, I was away and didn't watch much news and came home late yesterday to learn about the terrible fires in your Northern California.

When you are finished with your lists, would you mind sharing them to the group or with me? We live in the Seattle area, but so face some different issues than you but I like seeing how others are thinking.

I have my Go Bag, but am starting to think it needs refreshing as well as our plan.

Hi Adam, so sorry to hear about this. As I read your comments, what are your thoughts on how to get information out to family members if all cellphone towers are out? I believe in an earthquake here in the Pacific NW, this could be a real issue. Do you think a landline would fare better?

Please stay safe – glad to hear the wind is diminishing.

Glad to hear Sebastopol seems like it won't be affected, Adam. My cousin lives in Santa Rosa, and they're just outside the evac zone and have the cars packed and ready to go, but they're waiting and watching. She says the traffic is at a crawl, which makes me wonder if it wouldn't have been better for them to get out of there earlier…

My cousin lives in Santa Rosa, and they're just outside the evac zone and have the cars packed and ready to go, but they're waiting and watching.

It's their call, but if I were in Santa Rosa, especially near the evac zone, I'd get out now, before nightfall.

Local TV news is showing lots of footage of neighborhoods where folks went to bed last night with no clue anything was amiss. In the morning, their houses were cinders. They had no time to do anything but run when someone banged on their doors in the middle of the night urging them to flee.

In my opinion, it's just better to be safe than sorry in situations like this where the possible downside (i.e., dying horribly) totally dwarfs the inconvenience of unnecessarily spending the night in a friend's guest bedroom. They can easily head back home in the morning if everything goes fine.

As I said, Sebastopol is OK right now and looks like it will remain so. But still, my wife and I are talking about having at least her and the kids spend the night at her parents tonight.

The fires in/around Santa Rosa are still breaking out. The situation is very much *not* contained. So why gamble?

Yeah, not sure what's spurring the indecision. I did pass your message along–thanks.

Bushfires are extremely scary – even when you are prepared! (as the ash/cinders can start spot fires well ahead of the main fire depending on which direction the wind is blowing).

After our emergencies, CSIRO did research and the local government put this together –

I hope it will be useful.

…I wonder how long the photographer had been waiting to take this exact picture at this location during a canyon fire? 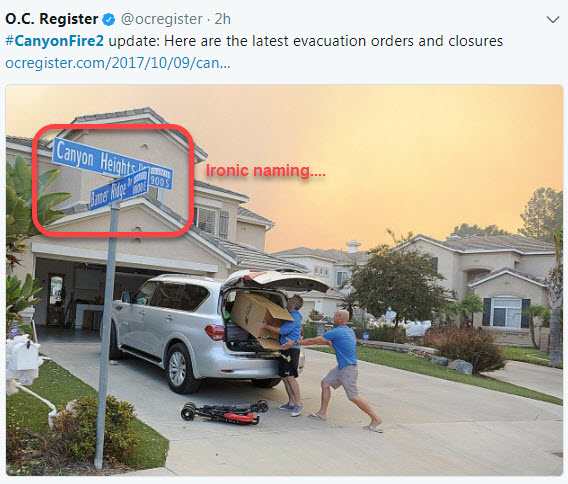 You may also want to consider Thermo-Gel as part of your bushfire preparation kit, as it can be applied a few hours before the fire front arrives. It was developed in California. It is a chemical fire-retardant spray gel (based on the absorbent crystals used in disposable nappies if I remember correctly).

You will have to search out where you can buy it (as the link google found for me seems to be dead).