A 20,000-acre fire is raging just a few miles from me. This is what it looks like out my back window (it’s still dark):

This is a HUGE fire. Am heading off to pick up my daughter, who is at a friend’s house closer to the blaze.

If you live in Napa, Sonoma or Lake counties, please seek safety asap. The news is reporting the roads are already getting jammed with evacuaees.

Just got back from picking my daughter up at her friend's. On the way there, it looked like I was driving into Mordor — huge red/orange glow and dark smoke clouds on the horizon.

Her friend's house was packed with extended family who had been forced to evacuate from their homes in Fountain Grove. On the drive home, my daughter's phone was erupting with Instagram alerts from her network of friends reporting homes, schools and hospitals that have burned. Halfway home, our cellphones lost data service (still out).

Traffic on local roads was becoming congested and long lines were building at the gas stations.

We got back home 10 minutes ago. Still have internet service at home and we're watching the coverage on local TV. The fires in Santa Rosa look like they aren't contained at all (TV just reported 0% containment). One journalist is covering a gun shop that's now ablaze, with hundreds of rounds of ammunition going off.

The damage from this is going to be huge, at least for the local economy. Fortunately not many reports of life loss so far.

Sunrise happened about a half hour ago. I've never seen such a bright, blood-run sun. Now, though, the sun is fully obscured by a dark overhang of smoke/clouds, making the lighting outside really eerie. There's an eclipse-like faux night across the landscape. Very ominous.

This video, which I must have seen three or more years ago, really stuck with me because it shows just how undangerous unchambered ammunition is.

In it, they try every possible way to create a hazard.  They shoot cases of ammunition with high powered rifles.  They run over piles with bulldozers.  They set huge amounts of it on fire.

There are pops, but nothing penetrates both layers of a sheet rock wall (in fact, there were almost no penetrations and the second layer of sheetrock was never dented.

So, out of all the worries, Adam, we can scratch off errant ammunition cooking off as one of them.

Please keep us updated on the fires and how you are managing them too!

Some 10 to 15 significant fires were reported burning in the North Bay this morning.

SF Gate on the Fires:

Massive wildfires burned out of control in Napa and Sonoma counties early Monday, destroying hundreds of homes and businesses, forcing the evacuation of thousands of people and shutting down major roadways as firefighters sought to halt the advance of infernos that were driven by powerful winds. 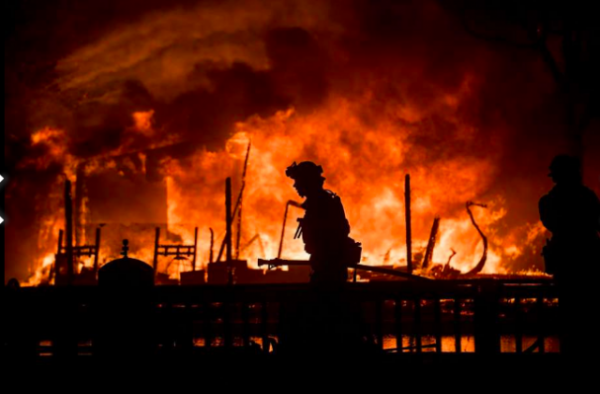 There was no immediate estimate of the damage or the extent of injuries, but vast swaths of land were burning in both counties.

The fire had started Sunday in Calistoga and burned west through canyons and over hills.

One blaze in and around northern Santa Rosa called the Tubbs Fire had burned at least 20,000 acres by 8 a.m. Scores of homes were lost in the Journey’s End Mobile Home Park on Mendocino Avenue, and the nearby Fountaingrove Inn burned, as did the Hilton Sonoma Wine Country and a Kmart store. And that was just the beginning.

Residents in the area described fleeing for their lives in the middle of the night from the fire, in cars or on foot. Hundreds of firefighters were on scene.

It's a little premature to say with confidence, but I think my neighborhood will be OK. The 101 freeway will act as a powerful firebrake, plus the winds, which have been unusually strong over the past 24 hours, are now blowing away from us (east and north).

Very sad to see the coverage coming in from other neighborhoods that are not so fortunate. Houses in Glen Ellen that are now nothing but cinders. My daughter just found out her friend's grandparents have learned their house in Fountain Grove has burned down.

Having to scramble this morning definitely has brought learnings with it regarding preps. Here are a few:

More as I think of it…

I’m in rural bennett valley. Word is our neighborhood still safe, but bennett ridge 2 miles east total loss of 60 homes. Our neighbor was pounding on our door, other neighbors honking horns. We could see fire to the east and north. We drove around our closed loop neighborhood of 65 homes and could lights on and people leaving.
We took or computers, hard drives, important documents, medicine, change of clothes, dog and food and left within 15 minutes. Smoke , incredible wind. The fire station quarter mile away empty of personnel. Like zombie apocalypse. We went to bodega bay to join a friend who lives here. Another family sheltering here too…their house in fountain grove most definitely lost.

We also know at least three other families in rural santa rosa who have lost their homes.

We both had full tanks of gas. We saw lines at gas stations.

I was just saying I wanted to pare down and be more minimalistic. Be careful what you wish for.

Glad to hear you're OK. Keeping my fingers crossed about your house. Please keep us informed.

If you need anything while in Bodega, just ask. I can drive any supplies you may need over.

Disturbing seeing fire out the window like that I'm sure. . .I hope things continue to improve in your immediate area and that you can help those who need it when the smoke clears.

As part of my post-hurricane rethink, I'm working on 30 minute, 8 hour, and 24+ hour evacuation packing / to do lists which will allow us to round up and do the critical things based on the time we have available once we decide (or are ordered) to evacuate.  One of the things I'm including is a to do list for each of the kids so that everyone has something meaningful to do as we run around preparing to leave.

Your story is another reminder that serious or existential threats can come at any time and are no respecter of persons or property.

It's surreal here in the town where I live. My town, Sebastopol, is OK (for now), but everyone is swapping stories of evacuees that have arrived from other less fortunate areas.

Downtown is bustling. Some of it is business as usual, but a lot of it is people stocking up on food and gas.

The air is still filled with floating ash. Some folks are wearing surgical masks and other mouth filters. Shockingly, the news is reporting that as bad as the air quality is (125 ppm vs "normal" of <35ppm), it's not as bad as Beijing(!).

The lighting is also spooky. The particulates in the air are acting as a filter, giving the sky a peach-colored glow. Everything looks like it's in an old 1970s photo.

Lots of folks here are reaching out to offer their spare bedrooms and back yards to families and livestock displaced by the fires. The community here is pulling together admirably (which was one of the reasons why I chose to move here).

The news just reported that at least 1,500 structures have been reported as lost so far. Many more are still under threat. As mentioned, the cost of this blaze is going to be extremely high…

And like "advanced" farming, the fires create their own (and one of many) strong climate change feedback loops. Of course, like a de-iced ocean, a barren, biologically dead piece of earth is its own loop. Someone should tell Elon Musk not to worry about Mars since soon we'll have our own.