Malone: people over 65 are 5 times as likely to die from Vax as c19 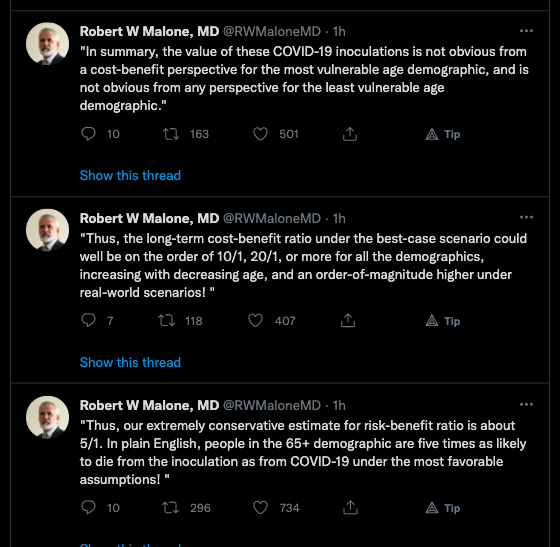 I hope this gets out to a wide audience.  I know personally people in that group of over 65 who are refuseniks.  I need to let them know.

I have great respect for Malone. And I was waiting for his opinion on this issue. For healthy people under 40 rejecting the vaccine is just common sense. In my age group (70 and up) it is a real question.

Now that Malone has weighed in, I am more comfortable with my decision not to get the vaccine.

This is important data…my parents are either side of 90 and they have enthusiastically taken every shot offered.  Unbelievably, they had no side effects.  They can’t wait to get the booster.  I shared the recent Lancet study (on booster recommendations) with my father, who was a university professor and is still sharp, who said he’d read it, but it’s tough to accept as correct information from your child.

I’m not sure the numbers of deaths, vaxed vs unvaxed, in over 65 population supports that assumption. I hope Chris will run the numbers to verify.

Thanks for posting – this is an interesting study. I’ve been wanting to go through VAERS data myself for a while to compare post-vaccine deaths against normalized expected deaths, but as this study indicates, that is a VERY complex problem due to uncertainty around reporting reliability, particularly under-reporting.

I read through the study and here’s what I think is the most salient part (I was a bit disappointed that I had to go almost to the end to find this):

“However, as we have shown previously, three corrections to these numbers are required to convert them to real-world effects. First, as the Harvard Pilgrim study has shown and as our results in Appendix 1 confirm, VAERS is underreporting actual deaths by about two orders of magnitude. Applying this correction alone to the above 1/270 ratio changes the risk benefit to about 1/3., Second, as the CDC has stated, approximately 94 % of the COVID-19 deaths could have been attributed to any of the comorbidities these patients had, and only 6% of the deaths could actually be attributed to COVID-19. As we pointed out, if pre-clinical comorbidities had been included, this number of 6% would probably be decreased further. For conservative purposes, we will remain with the 6%. Applying this correction to the 1/3 risk-benefit ratio changes it to 5/1! Third, as a comprehensive survey of false positives from RT-PCR tests concluded: “evidence from external quality assessments and real-world data indicate enough a high enough false positive rate to make positive results highly unreliable over a broad range of scenarios” [127]. Because of the myriad RT-PCR tests performed in the USA to screen for/diagnose COVID-19 using different values for Ct and different procedures, a specific number for false positives cannot be obtained at this point in time. Again, these false positives would reduce the 6% number, perhaps substantially. And again, for conservative purposes, we will remain with the 6% number.”

TL/DR: they are multiplying the number of VAERS deaths by 100 and excluding 94% of COVID-19 deaths to arrive at their 5/1 ratio. The former is to eliminate under-reporting and the latter is to remove the effect of comorbidities (since death counts include dying WITH COVID-19, not dying OF COVID-19; although ignoring all of those deaths actually sounds very AGGRESSIVE to me because how could we say that they wouldn’t have died if they didn’t have COVID-19? They’re basically saying that a 80 year old diabetic who died of COVID-19 didn’t die of COVID-19…..am I reading this incorrectly????). While the logic for the former appears ok (to me), I’m having trouble wrapping my head around how this could reasonably be considered a conservative ratio (no error bars in sight), particularly since they are counting the period covering the first five months of 2021 – when most of the US inoculations occurred but when COVID-19 deaths were mostly at a trough due to the lockdowns. I have difficulty imagining how this ratio wouldn’t deteriorate in say Sep/21, when there has been a spike in deaths but fewer inoculations…..in this period the primary mitigation strategy went from lockdowns to vaccinations, meaning that COVID-19 deaths were artificially lower in Jan-May/21 because most stayed home.

Granted this study admits a lot of uncertainty and shortcomings which is encouraging (eg: they outright state that there could be long-term vaccine side effects but don’t make any assumptions and only focus on the first 7 days; they outright admit that VAERS is horrendous to work with; etc). They also admit that this uncertainty won’t be resolved until 2022 when official death rate stats come out…..I’m personally flummoxed that the gov’t hasn’t put more effort into getting these stats in real-time.

Notwithstanding my skepticism, I’m pretty shocked that this much effort needs to be put into determining the safety/danger of the vaccine; as this study rightly points out, the sample sizes in the initial trials were not satisfactory. Further, I’d have expected the gov’t/CDC to put in a LOT MORE EFFORT into collecting vaccine injury data if they’re going to mandate vaccines…..seems like a lot of this uncertainty and debate could have been avoided if they could outright state the safety or potential risks at the 1/3/6 month mark?

I’m curious to hear CM’s interpretation given that he’s read a lot more of these than I have and is far more credible than myself.

The problem is that they (whoever they are) are not allowing the data to get out. They are hiding it. So we are left with experts that have the ear of many other scientists and trusting their gut. It is horrible. In the absence of good data you have to use other data.

My last resort is to look in my friends and family and see how many have died or were hospitalized with covid (0 – which is really weird I think) and how many died or were hospitalized with vaccines (this is where it is tricky. Since no one is blaming the vaccine we can only guess that a 30 year old that gets a pulmonary embolism within a week of the second shot is a vaccine side effect) but I think the number is a solid 2 and a possible 5.