Just 5% of the batches were responsible for most of the vaccine deaths in information gleaned from VAERS.

“Why is it that certain batches of the vaccine have proven to be more harmful than others?

Why is it that certain batches of Covid-19 vaccine have proven to be deadlier than others?

Could this just be a quality control issue?”

Could be a contaminant that is causing the higher death rates. Could be extra spike protein (they extra-larged your vaccine).

Also could point to some batches being saline. Maybe the killer batches are mRNA and the innocuous batches saline or something inert.

Shall we conclude that some relatively subtle variable in these formulations determines whether they are harmful or not?  Is this evidence that there exists a  benign version of the shot if and when that variable is in an appropriate state of control?

In a normal world this would kick-off an in-depth analytical study of the affected lots.  For formulated products like these, we would immediately (in my industry, semiconductor manufacturing) do a traceability analysis on the affected lots.. did they all use the same underlying lot of lipid nanoparticle raw material A?  Were they all made in the same reactor tank?  The variable of interest should jump out easily, unless there is something more nefarious afoot.  We need to follow this story closely.

In the comments for the article linked by Oliveoil, somebody reposted a comment from Dr. Mike Yeadon, which I am reposting again below;

From Dr Mike Yeadon refering to this article on Telegram:
https://t.me/robinmggroup/377545

This information about different safety profiles of different “lots” (batches of finished product of covid19 vaccines) is completely without precedent.
I’m thinking about it & I don’t yet have clear in my mind what the envelope of plausible / possible explanations are.

But the bottom line is that the majority of lots were associated with good short term safety, few hospitalisations & death (true both for Pfizer & Moderna).

But in both cases, a small number of vaccine lots are associated with incredibly high rates of adverse events including deaths.

How can this possibly happen? Drug manufacturing is performed to exacting standards of control. The ‘active’ agent is made in batches (it cannot be guessed how many doses each batch makes, because no one has ever made commercial scale mRNA products before.

But each batch of what’s called “drug substance” is then used to formulate, fill, pack & label various lots of finished drug product.

Testing methods are developed for all of the manufacturing steps, together with standards for the results to be considered acceptable.

Something happened between drug substance & drug product which resulted in a small number of finished lots for distribution which were destined to kill huge numbers of people.

1. Errors made in the final steps of manufacturing which resulted in certain batches bring reasonably benign & others extraordinarily deadly. I just cannot imagine the kind of mistakes which could produce such radically different clinical profiles. For example, poor handling during shipping & storage prior to administration to people. Problem I have with this is that such handling errors (eg allowing temperate to rise way above limits defined in stability testing) usually result in drug product which doesn’t work properly, as it’s degraded, not in drug product that’s incredible dangerous.

2. At some point in manufacturing, someone or some entity actively modified what was being filled into vials, and it was this which resulted in extreme skew of clinical safety profile.

There has been so much truly awful behaviour of “elites” that I’m simply not willing (as I would have historically) to dismiss the possibility that this has been done on purpose.

What I do know, and this is a test of whether there’s the slightest sign of integrity from these companies as well as the regulatory agencies, is that all use of the affected produce must immediately cease, all batches of drug substance & lots of drug product should cease.

The materials should be recalled to a place of stable storage & an intense analytical investigation initiated.

Unless factors are found which adequately explain the huge differences in clinical adverse event profiles, administration to humans must not restart.

If the manufacturers do not exhibit sufficient control of drug product, the authorisation they hold from various regulatory authorities are utterly voided.

Just when you thought this debacle couldn’t possibly get any worse, it gets much worse.

Expect to hear more about this.

Meanwhile, who in their right mind would roll up their sleeve?

Note, I have no information on the other vaccines or other territories not covered by this analysis of VAERS.

A brief look at VAERS data didn’t show any sort of obvious concentration in any given state.  I’ll poke around a bit more.

Dave, I thought the point was that the “bad” batches were widely distributed, whereas the “good” low AE batches were not.  Therefore we would not expect a State-based AE concentration, but rather it’s a batch signature we are looking at, if I understand correctly.

Two key parts of the grand scheme, that were supposed to happen, but didn’t:

1. ApiJect Systems Corp. was supposed to make pre-filled single-dose syringes tagged with RFID chips. We ended up with 10-dose vials instead.

2. ‘Tiberius’, part of HHS Protect, was supposed to assign a different pre-filled single-dose syringe, to each person, based on demographic factors from Palantir’s huge secretive database.

CNBC, reporting on Azar’s comments, noted that Tiberius, a software program developed and managed by Palantir, “will help the federal government allocate the amount of vaccines each state will receive,” and local officials will use Tiberius to “decide where every allocated dose will go—from local doctors’ offices to large medical centers.” According to that report and others, Tiberius would collect data from US government agencies, as well as from local and state governments, pharmaceutical firms, vaccine manufacturers, and companies like McKesson that have been contracted for the coming vaccine distribution.

Palantir’s role in Operation Warp Speed was only announced in late October, with mainstream news outlets such as the Wall Street Journal reporting that the company was creating a new software product that would manage the production and allocation of COVID-19 vaccines in the operation’s campaign. That mass of data will include “a wide range of demographic, employment and public health data sets” that will be used “to identify the location of priority populations” and make related decisions regarding the allocation of vaccine doses. Tiberius will also allow officials to “proactively identify distribution bottlenecks, inventory constraints, and gaps in administration across key populations.”

AFP confirmed the Wall Street Journal’s reporting and noted that Tiberius would provide Palantir with access to sensitive health information so that it could “help identify high-priority populations at highest risk of infection.” The Business Insider website noted that Tiberius would be capable of showing “areas with high proportions of healthcare workers, clinically vulnerable people . . . elderly people” or any other demographic deemed to be a “target population” by Operation Warp Speed. A separate report at Military.com quoted HHS’s deputy chief of staff for policy, Paul Mango, as stating that delivery timetables and vaccine-delivery locations were “being mapped out” by Tiberius, which enables officials to see how many people in a given “target population” are in any US zip code.

Palantir’s Tiberius uses the software that manages HHS Protect, a secretive database that hoards information related to the spread of COVID-19 gathered from “more than 225 data sets, including demographic statistics, community-based tests, and a wide range of state-provided data.”

Had things gone exactly as planned, it would have been possible for Tiberius to micro-target each individual with a shot intended to cause a specific result. E.g. the algorithm determines that a 75 yo, who pre-registered online, would get the formulation that triggers a heart attack within two weeks. A 50 yo may get the one that causes myocarditis, and die in two years.

College students might get the version that impairs fertility. Who gets one from the batch that causes MS, or uterine cancer? A 30 yo woman. Political activists might suddenly develop narcolepsy. If the NP PCR tests were gathering our DNA (BGI Genomics), they could’ve micro-targeted us with “vaccines” based on our genotype (e.g. FunVax). The real purpose of AI, I believe, is to do evil, then hide behind plausible deniability.

How come we almost never hear of wealthy individuals who had bad outcomes?  Maybe the rich zip codes got all the placebos?

TPTB screwed up. They released the SARS-CoV-2 virus in Wuhan before making sure the single-dose syringes would work. That’s why young healthy people are dying of conspicuously unnatural causes. Why are TPTB in such a hurry? Something about Ghislaine? Bob McIlvaine?

The investigation is by us…..not them. Obviously their position is “nothing to see here”. I hope Chris will weigh in on the VAERS batch question.

I remember a recent interview with Dr. Flemming that posted here a few times and then scurried down the armadillo hole of history……He posited that there were no three legged monsters breeding in the vials but he did show a field of floating garbage…And it seemed valid when he showed a slide with a clean picture of a saline solution.  Maybe the simple answer of contamination has some legs, but that still doesn’t explain the pattern of distribution of toxic vials to multiple states.

“Clara
Reply to Clara9 hours ago
It certainly does look very suspicious that the “bad batches” were distributed widely across many states, whereas the “safe batches” went to a far fewer number of states. Did somebody at the company know which batches were good and which batches were bad? Did they send the bad batches to many states in order to spread out the deaths and injuries and call less attention to the specific problematic lot numbers?”

I’ve been posting regular updates of the origins of that contamination story & the clotting issues – even before they were shown on InfoWars: 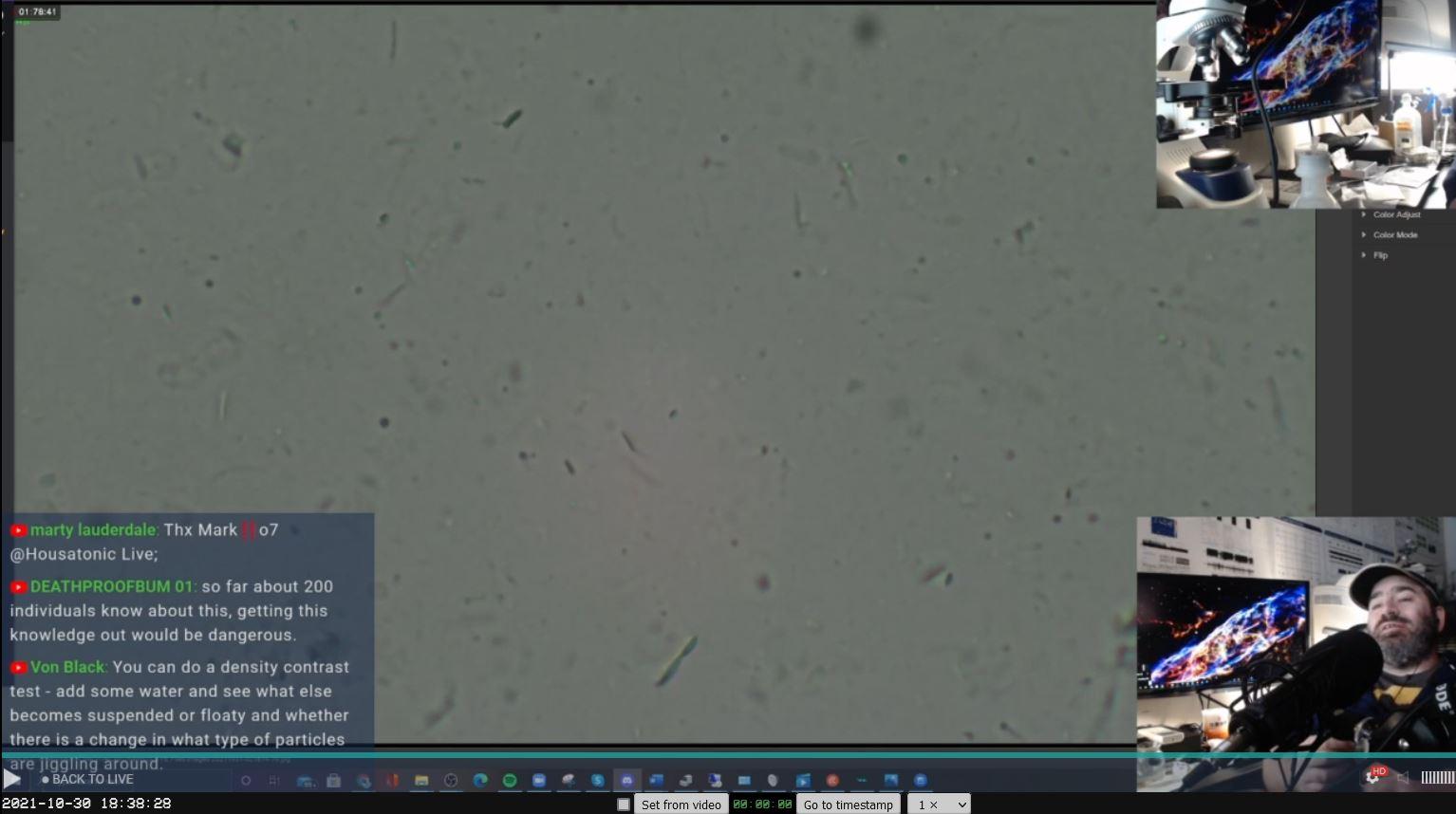 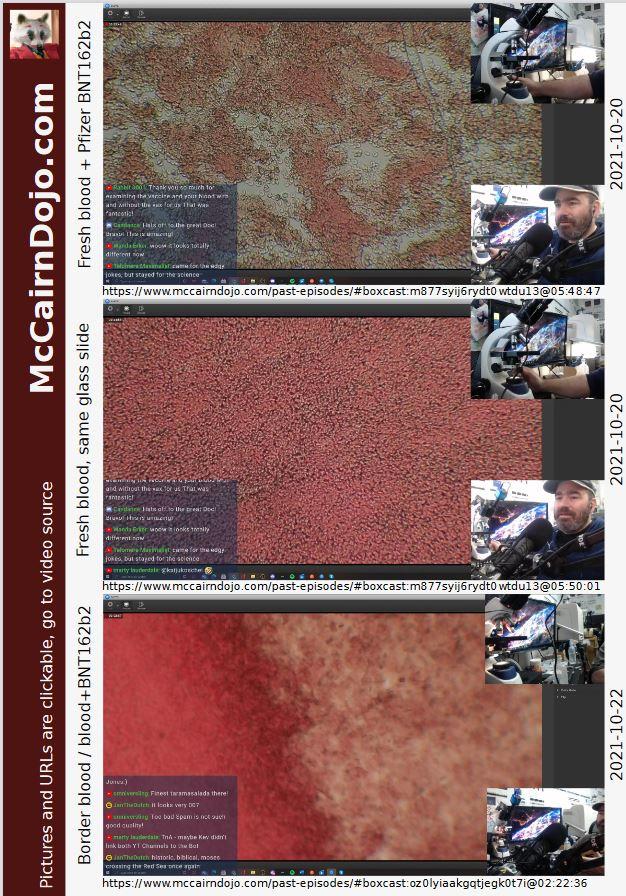