While Chris and I are waiting to present later tonight at the New Orleans Investment Conference, I’m sharing my notes from listening to the other speakers assembled here.

I’ll update this periodically as I can as the presentations continue over the next few days:

Thanks for being such a great notetaker Adam.  While I am at the same conference (as you know) I didnt get to hear some of the speakers you did so this really helps to distill down what the other speakers have been saying.  Its great to also not have to take any notes knowing that you have already done so (and done a much better job than I would have anyway).  Looking forward to your and Chris' talk tonight and again tomorrow.  Its interesting that here again (as with Freedom Fest previously) there are no other speakers really talking about the 3E message so your talk should be quite differentiated from all the other speakers here.  Most are focused mostly on the Economy and a few have talked about Energy (without really linking those 2) and nobody has yet mentioned the Environment that I have heard.

Thanks for the notes Adam,

Always like hearing what Schiff has to say and the metals and most of the real estate notes are of value.

I do have a problem with some of Robert Helm's real estate advice. He suggests buying land for mobile home parks and squeezing every last dime out of residents living in what amounts to stranded assets parked on someone else's land. "Makes them much more reliable renters," is code for.  "You have them where you want them."  This is incredibly mealy mouthed.

He advises that the land owner has the option of flipping the mobile home park to developers when the area starts to gentrify?  How many tenants might that render broke and homeless?

Here's what I picked up from DiMartino this morning:

Fed is not some evil cabal, but a disappointingly normal group of mild academics…and therein lies the problem.

We’ve been trading ‘in the dark’ since 1987.  Greenspan broke the markets by inviting the Big Boyz to front run the Fed.  20th Oct 1987 was the actual date.  The 'put' was born and price discovery has been destroyed ever since, and only gotten worse.

Household wealth stands at a record 7x income, where the long run average is 5x.  This is astounding.

Commercial RE has never been more expensive.  Global credit markets at $226 T dwarfs that of the equity markets.

DB looked back to 1800 and has no example where the bond market is this over-valued.  Ever.

It’s time for central bankers to take a hard look in the mirror.  …and what they’ve done to retirees…$10M in savings to generate enough income to stay above the poverty line.

The citizens of the US will ultimately pay the price for the Fed’s mistakes. (Politicians love the Fed due to enabling deficit spending, of course.)

Price discovery has been destroyed by the Fed.

DiMartino is offering some tweaks to the Fed system, including re-drawing the Fed districts to deconcentrate the power, and change the governance structure to give voting power to regions appropriately, undo the dual mandate so that the Fed is charged only with safeguarding the purchasing power of the dollar, and leave employment to the private sector.  Hire the best regulators ever, and don’t allow the Wall Street sharks to run the system ever again.

The day the Fed crossed the line.  Dec 2008, who spoke up for the cautious investor, the pension funds?  One man only, Richard Fisher.  But the battle was lost to the PhD eggheads.  And here we are.

Chris or anyone esle, do you guys/gals have any recommended books on RE investing – single/multi-family homes?

"Fed Is Not Some Evil cabal"

…..whose ivory tower is more rhino hairy than mere library

"but the battle was lost to Phd eggheads"

….who could be harmless if they didn't work for criminals.

DiMartino is offering some tweaks to the Fed system, including re-drawing the Fed districts to deconcentrate the power, and change the governance structure to give voting power to regions appropriately, undo the dual mandate so that the Fed is charged only with safeguarding the purchasing power of the dollar, and leave employment to the private sector.  Hire the best regulators ever, and don’t allow the Wall Street sharks to run the system ever again.

Half measures, at best.  Money is still created the same way. A private banking cabal is still in control of our money and therefore us, our country and our economy.

Abolish the Fed!  Or, let it compete for us and our money with any other form of money we want to use to pay all our debts public and private.  If having a private central bank is such a good idea for US (as opposed to THEM), then they should be able to induce me to use their FRN's for some or all of my savings and transactions.  I've never seen such a proposal and I'm sure the reason is that the benefits for the owners of the Fed and the Banks in this system is so lopsided in THEIR favor, that once there was some choice most people most of the time would choose to save and transact in something other than FRN's.

Real Estate seems grossly overvalued now.  It's hard to imagine how it's going to maintain current prices when a major recession hits.  Invest with caution. 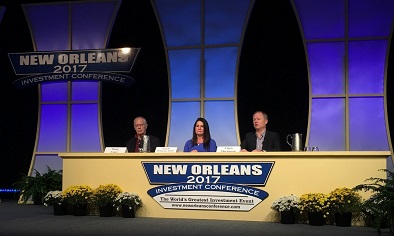 Enjoyed this panel discussion alot.  Took awhile to post due to the small size limitations for photos makes uploading hard to do without access to computer and Paint program.  Glad Danielie DiMartina Booth gave you the softball opportunity to bring Energy (and Primary Wealth) into the money discussion.  Hope you are able to make more conferences like this…it was obvious to me the audience really enjoyed the new angles that you presented at both of your speaking slots.