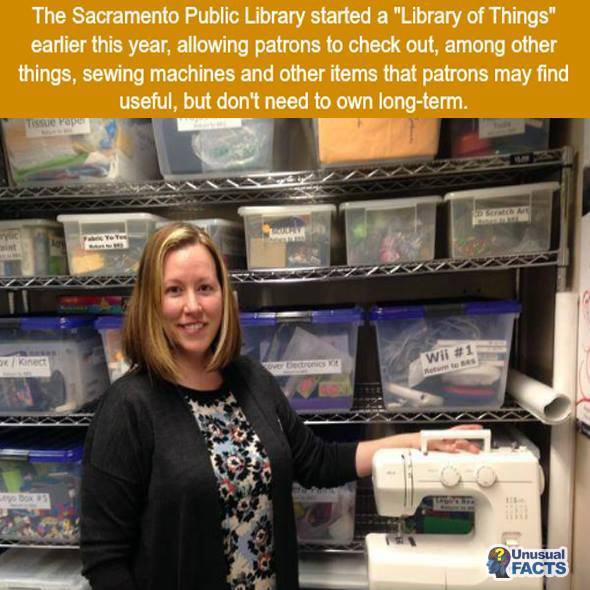 Maybe we can talk out local libraries into doing something like this. http://www.saclibrary.org/Services/Library-of-Things/

My local library has just barely stuck its toe in the water on this too.  I noticed a while ago that they have Kill-A-Watt meters available for people to check out as though they were books.  I did suggest to the head librarian that expanding this to include other things people would find useful but don't really need to own might be a good idea to pursue.  While it would involve more work for them it would also make the library even more relevant and valuable to residents (who vote to support continued funding).

It reminded me too of a presentation I heard by a ceramic artist, whose name I unfortunately do not remember.  This artist is about creating projects that build community.  He tries wherever possible to build off systems already in place.  If I remember correctly, one project he made a large bowl and combined it with a journal or folder of some sort.  Then he got things set up with a library so patrons could check these out with the idea being that they would prepare a meal to serve in the bowl and document it in the book, and return it all to the library for someone else to check out.  Over time a sort of community cook book was being created, as well as a sort of sharing of meals with neighbors.  It was an interesting project idea.  What seems most relevant here though is why he decided to work with the library for this piece.  He took note that libraries already have the infrastructure set up to identify individual items, check them out to people, and check them back in.  It may not sound like much but that is a significant thing.  Being able to piggyback on this infrastructure resource already in place is a major thing.

It seems like it would be a significant public service if more libraries started doing what Sacramento is doing.  I hope my library picks up on it.  I may bring this up again to my local library, noting that it's an idea another library has already implemented.

If you are computer savvy, you could install a “Koha” cataloguing system for check-in and check-out.
If not, you can still do it with notecards and recipe boxes.

Of course, the filing system is only the smallest part of a library: there’s the human traffic, the desire to borrow things, and so on.

but if you wanted to do it at the Y, or the recreation center, or the Apartment Complex center, it could be done with Koha or notecards.

I think the "library of things" idea is wonderful, but I can imagine that there would be significant background cost in maintenance, especially for things like sewing machines.  Even people who know how to use them might not be familiar with the idiocyncrasies of a particular brand and bring the machine back with hidden problems for the next user.  Too much of this could kill the project.  I suppose that a large city library could manage this, but in a tiny community like ours (one of the Gulf lslands in BC), a thriving "free store" serves the same purpose.  Stuff is taken out and brought back when no longer needed.  Not as efficient in some ways but simpler where there are no are no spare community funds and the volunteers are already maxed out.  Btw, is it just my tablet, or is there something in the software behind this site that bites back whole chunks of words after you've typed them?  Having to go back and retype several times.  Frustrating. 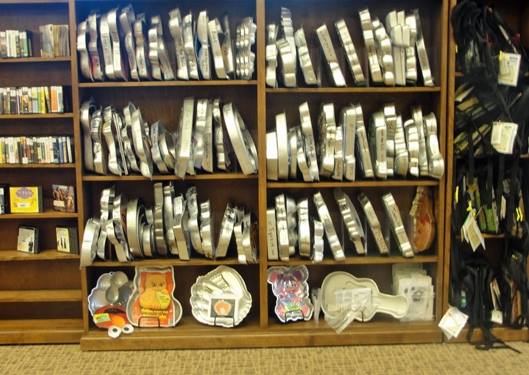 Cake pans. Pretty much a maintenance free item, too.