Isn’t it interesting that ANOTHER anti-malaria drug also shows promise. What’s their mechanism(s) against malaria that also kills SARS-CoV-2?:

Ivermectin is more anti-parasitic than just anti-malaria.    These chemicals have broad based bio-chemical reactions than often interfere with certain cellular functions/   Some of the diseases processes caused by pathogens can be inhibited by the blocking ability of the drugs.   They are not always specific to the pathogen but more the chemistry of the body.

They do  in vitro studies,  and that would show some sort of effect direct on the pathogen.  However, throwing soap, bleach, vinegar, etc can do that as well.     So, its method of action in the body is not always the same.    Invermectin has direct action on parasites, and minimal effect on humans.   Perhaps virus biology ( if such a thing ) seems to share something with parasites.

However,  we are well beyond in vitro,  with Ivermectin.  There are drs using this with success greater than HCQ.  In fact the few studies done show it to be incredibly effective.   Most drugs when studied and approved usually show much less clinical success.  This should be big news.. But since its an off patent drug.. — no one really cares.   But if this were some new drug ,  it would be making huge headlines and touted as miracle cure and the stock would be through the roof.

After writing the above comment it got me thinking that could be used against many viruses included HIV.   So, a quick duck let me to a reddit post that shared some studies regarding the anti-viral effects.

Ivermectin is a specific inhibitor of importin α/β-mediated nuclear import able to inhibit replication of HIV-1 and dengue virus.

Liposomal Systems as Nanocarriers for the Antiviral Agent Ivermectin

Discovery of berberine, abamectin and ivermectin as antivirals against chikungunya and other alphaviruses

^^This paper suggests that ivermectin was only partially successful for MERS or SARS, but it still might be worth trying for ncov-2019.

“The primary screen resulted in the identification of 11 hits that showed at least 50% inhibition of virus-induced CPE in the absence of cytotoxicity (which was defined as >75% viability in compound-treated mock-infected cultures). Next, these drugs, as well as the earlier reported coronavirus inhibitor chloroquine (51–55), were tested over a broader concentration range (2 to 62.5 μM; see Fig. S1 in the supplemental material). In this screen, compounds were considered confirmed hits when they inhibited MERS-CoV-induced CPE by >60% at nontoxic concentrations (defined as >75% remaining viability in compound-treated mock-infected cultures). Following this second round of testing, cilnidipine, fluoxetine HCl, ivermectin, manidipine, oxybutynin, pyrimethamine, rifabutin, and rifapentine were not further retained (see Fig. S1 in the supplemental material).”

After reading the last study I am pretty much beside myself.   It seems very common for the scientific community to look for effective drugs within existing drugs for novel viruses.   It appears that ivermectin  along with HCQ were identified for the potential years ago for mers and sars.     Its not like some studies were not done.  Even Chris showed in one of his videos that they had identified some effectiveness of HCQ for sars and coronavirus long before COVID 19.    So it is rather depressing to see how this effectiveness is being suppressed now.   they are trying to trash the studies we are seeing effectiveness now, when they actually were published without refute decades ago.   Very sad.. fraud happening here.  Meanwhile we see how ineffective redmesdivir is now.   AND Expensive with 2 courses at 3400 each..   as standard of care now.. what  an F,n  joke..  very sad..

since viruses cannot reproduce on their own, but need a host, that should classify them as some kind of parasite

Indeed, the efficacy of these drugs has been known a long time and some of these very studies were  done by coronavirus researchers who now have amnesia and are touting experimental drugs they have worked on instead.

These articles help explain why:

In a study (n=304) done in Egypt of “close contacts”, ivermectin was seen to be incredibly effective (my words, not theirs).  In the non-treatment group, 58.4% developed COVID, while in the treatment group, just 7.4% developed COVID.  This appears to be better-than-vaccine level of effectiveness.  Just give it to all close contacts, and since most people get COVID at home, this will basically stop the epidemic cold.

This is a game-changer.  And, it will also get rid of your parasites too, as a side benefit.  🙂

Note: our society is so horribly corrupt, we must now be led forward in medical advances by trials in the third world.  Peru, Bangladesh, and now Egypt.

One must realize that Game Changes will not be
well-received by those who write the Rules
of the Game.

Game Changing is strictly forbidden.
Too many Quatloos are at stake.

Nothing to see here.
This is not the medicine you’re looking for.
Move along.

I expect each and every one of you on this site to understand
that I will mix satire, sarcasm, and truth as I see it all in one, in a
single, totally undigestible package. It’s just who I am.
I can’t help it.

The simple fact is, we are on our own.
I hope to contribute so long as I am able.

WARNING (applies to apple flavor only):

I have done some research and determined there is a small (but significant) chance that, if you take Ivermectin in the apple paste form, you may become a neigh-sayer regarding conventional COVID-19 treatments.

Iquitos Peru Defeats Covid with Ivermectin
If You Knew of a Cure for Covid, Would You Share? 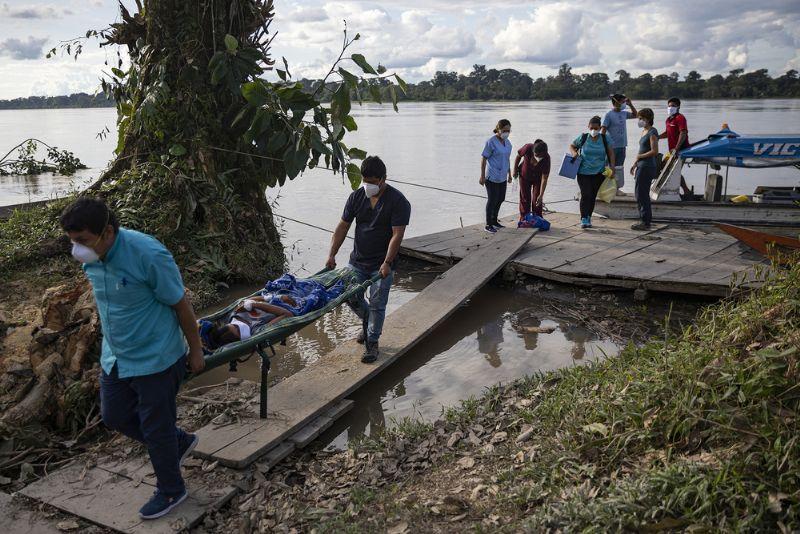 Carrying a Covid-19 patient in a village near Iquitos, Peru

21 years ago, I traveled to Iquitos, Peru. Ever since I’ve had an interest in the people there. I have no medical training. But when my friends in Iquitos told me the story of what had happened in their city, I felt a responsibility to do research and possibly share it. Since then, I’ve spent a lot of time communicating with my contacts in Iquitos.

Yesterday I asked blog readers “If you knew a cure for covid, would you share it?” The answer was overwhelmingly “Yes.” As one doctor, Brett Oliver, said, “The information on a potential treatment should be made available. Waiting for someone to officially approve something often delays things needlessly.” So, here is the story. I did my best to corroborate the details through multiple sources.

“It will be a massacre”

Iquitos didn’t have the luxury of time. A city of 450,000 people deep in the Amazon jungle, its people were dying. Covid was running rampant in the population. Time magazine’s May 29 article asked this about Peru, Why is the Coronavirus outbreak So Bad?

The New Humanitarian filed this report on June 2.

“Within weeks, the corridors of the regional hospital in Iquitos, the country’s largest Amazonian city, were overflowing. Patients lay on mats or slumped in chairs, connected by slender tubes to life-giving tanks of oxygen.

Then the lifeline ran out.

The hospital’s poorly maintained oxygen plant was only partly operational and couldn’t keep pace with a demand of as many as 500 tanks a day. As patients died for lack of oxygen, desperate relatives lined up overnight outside the two private companies that sold refills.”

A local administrator, Miguel Fuertes, said, “This is a disaster, and it will be a massacre, not only because of the virus, but because of [official] incompetence.”

70% of the people in Iquitos had contracted Covid. Elias Valles is pastor of Remanente Church, the church we worked with. He is a man that I have found trustworthy over two decades of relationship. He reported that “At its peak, the virus was killing 100 people a day.” The Guardian’s headline was We are Living in a Catastrophe! Indigenous people along the Amazon without health care were especially vulnerable.

In that desperate place, Valles’ son, Caleb, decided that something had to be done. He created a group to pray and research options to help.

Then a government nurse told him about an amazing discovery. Some of the people who were getting sick were also making extraordinarily quick recoveries. Upon further investigation, they learned that they were taking Ivermectin, a common anti-parasite drug frequently used to help both people and animals fight worms.

Caleb and his friends bought a large supply of Ivermectin. They were able to get it cheaply from veterinarians. They began to distribute it to the poor up and down the river. Their dosage varied according to weight, but averaged about 1.6 mg. Because they didn’t have official approval, they kept their efforts quiet. But as word got out that people were being healed, lines began to form to buy Ivermectin. Prices soared.

Eventually thousands of injections of Ivermectin were given. Caleb estimates 15,000 people were treated with a success rate of nearly 100%. He says that a few people suffering from co-morbidities died, but the vast majority were better within a day or two.

Kan Mendoza Chu, 45, was a typical example (I was given multiple examples). Having contracted Covid-19, he had a fever, hurt all over his body, and had lost his appetite. He was give .8 cc of Ivermectin subcutaneously, and the next day, Chu was 90% better. He made a full recovery subsequently.  [They used injectable veterinary ivermectin.]

Word spread to other clinics and soon, most of those in Iquitos had been given a dosage and the virus was eradicated.

Ciro Maguiña, one of Peru’s top infectious disease doctors, [the vice dean of the medical college of Peru]  was the first to officially acknowledge the role that Ivermectin played in stopping the epidemic. The magazine Pro&Contra, says the people of Iquitos “never strictly adhered to the medical protocols of the Ministry of Health, on the contrary, they supplied Ivermectin to almost their entire population, slowing the advance and impact of the lethal virus by 95%.”

What research is there on Ivermectin?

In April, an Australian group reported success (see this article) in its in vitro tests using Covid. Dr. Kylie Wagstaff, who led the study, says “We found that even a single dose could essentially remove all viral RNA by 48 hours and that even at 24 hours there was a really significant reduction in it.”

She goes on to say that “the mechanism by which Ivermectin works on the virus is still unknown but it seems that the action of this drug is based on its action in other viruses, that it works to stop the virus ‘dampening down’ the ability of the host cell clear it.”

In Bangladesh, a small study of 100 Covid patients showed that “all patients tested negative and their symptoms improved within 72 hours.”

Of course a full understanding of how Ivermectin works and when it can be appropriately used is still a long way off. Governmental agencies like the FDA warn in no uncertain terms that Ivermectin “is not approved for the prevention or treatment of COVID-19.”

Though similar reports of Ivermectin’s efficacy against Covid have surfaced elsewhere, the medical community is cautious.

“Human testing must be done,” they say.

Caleb Valles replies, “We’ve tested Ivermectin on thousands of people here in Iquitos and it stopped Covid dead in its tracks. We just want the rest of the world to see what we’ve seen.”

This article also says the in vivo doses in those studies are likely too low to achieve kill.

2. In this article from June, two researchers write that the original study used cell-culture doses that would be toxic for people. The original study authors counter by saying the drug doesn’t attack the virus per se but rather a protein used in replication and in similar cases you need a much smaller amount to slow the virus down and help the body mount its own immune response.

4. This Japanese trial looks like it will be credible:

5. A 15 min documentary on Ivermectin in Peru:

Video of the Peru experience with Ivermectin is here (15 min):