I have seen several MSM media stating that there is a Second wave of Covid devastating India Currently.    However, I have seen the same photo of “people dying in the streets” on multiple channels around the internet.     However, the reference photo is more than a year old and was actually a “gas leak” cotastrophe and not Covid.   It is reprehensible that the MSM can claim such and use photos to make their substantiations that clearly date to unrelated things.

Additionally, I have seen social media posts by multiple people “from inside India”   that are stating the reports are complete fabrication, while actually showing a normal situation in India.  This includes no mask wearing, commerce as usual, and empty hospitals.

We know they are having great success in India with Ivermectin and HCQ.  And that the country early on half the infections and half the deaths as the US.  being on par with the death rate with the US.  Though infections/capita were much less.    But more lately their death rate is half that of the US to equal about 1/3 total of US deaths, while having half the infections of the US.   So , they have gotten a much better handle on things than the US.    The question is now.  What is the reason for these obviously false claims?  to take out HCQ and ivermectin?  or perhaps , because we are not seeing much in the US , and preparing for more normal lifestyle, that they must instill the fear of how bad this is, when we cannot realize factual in our own circle?   And that we must put back the lockdowns and return to a state of fear and run for never ending updates of vaccines.

Anyone else seeing and hearing what I am?

I have heard similar things but hard to find hard data to support. My suspicions tend to fear mongering and that it is not likely as bad as the MSM makes it out to be. Just my gut instincts.

This is a good read that spells out a lot of the underlying causes of the outbreak, with the usual corruption and players doing what they do best, which is put greed ahead of life.

This is not entirely fake or fabricated.. India is having a significant wave right now.. may just be turning over; 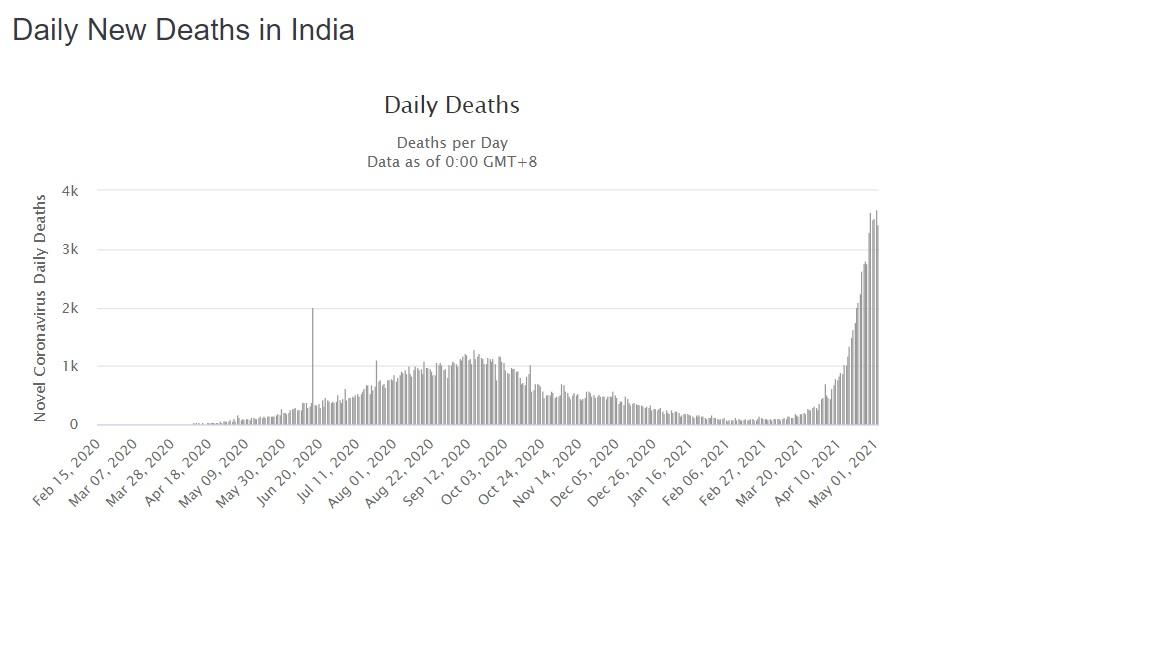 India’s peak may be in at 400K daily cases and maybe 4000 deaths if deaths climb for another week or two.  On a population weighted rate, that’s 40% of the cases and 25% of the deaths of our recent peak here in the USA.  Our wave played out in 5 months with a broad peak and theirs looks like it might be over in 3 months with a sharp peak.  In the end they might be at 20% of the cases and 15% of the deaths on a population weighted basis.

Dr. Kory discusses the situation in India in this video released on April 28, 2021  :

That link jumps past the earlier discussion on changes to the medication protocols and starts at the beginning of the discussion on India.

Some areas in India are getting hard hit by the latest wave of COVID-19, while other areas are not seeing much of an increase.  Ivermectin usage is not uniform in the country.  The video discusses how its use in the state of Uttar Pradesh is helping to keep the impact to a minimum, but other areas which do not rely much on ivermectin, such as the city of Mumbai, the capital city of India with a population of about twenty million, are in a state of panic.

Jim, I have been following worldometers for a year now.   The problem is with what we are seeing is so inconsistent with what we were seeing previously, it is not logical.   For a country that has 1.5 billion people, it doesnt make sense they could keep covid in the box, and then in 1 month balloon.   Especially considering the way they have handled it with HCQ and Ivermectin.  Even with a new strain , that is more infectious , HCQ and Ivermectin would be effective.    My assumption is that this wave is not due to COVID but COVID vaccination.    Though, we do not hear actual evidence reports coming from actual civilians via social media, deaths from vaccine would likely be reported.  At least I have not seen reliable and reputable ones as of yet.

Disco Bear, you make some good points.   The country is certainly not as uniform as the US.   There is a definite class system , where lower class are not offered access to normal health care.  AND my guess is simple medications like Ivermectin and HCQ.  Maybe someone can get some geographical, or demographic information on what is going on.

Talking to a friend at work whose family still lives there it is actually pretty bad in areas. Hearing some of the things he said makes me worried about the new strains and if the vaccine is really what people are hoping it is.

They may actually be ahead of us instead of behind us.   There maybe some related ADE from the vaccinations,  or perhaps that vaxxing has pressed a new strain that is deadly to those who are unvaxxed   We are actually anticipating a so called second wave here based on those two possibilities.

After crunching numbers with my partner I have come to a couple of conclusions and beliefs.   First,  the actual numbers of this HUGE crises in India is nowhere near what we have experienced here when we were at 3500-4500 deaths per day in the US.  They are not even quite at this now with a population of 4x.  So, really their Current DEATH WAVE is only about what we in the US are experiencing now , mind our max.   SO, it is not bad.  THERE certainly is no crisis.  Or this doesnt represent a crises by US standards.  They would have to have about 1600 deaths per day to be where we were at our worst.

Moving on from this.  Why is a country that is using HCQ and Ivermectin seeing so large increases in deaths.  My conclusion is , it is due to vaccination. We have seen a uptick in cases everywhere there were lots of vaccinations.   AND we saw a proportional increase in deaths as well.    So, why are we seeing a more stark increase in India?  than vaccine deaths elsewhere.. Simple  when you start with a lower death-rate of covid than everywhere else , due to HCQ and IVM, your impact of death-rate from the vaccine looks larger in contrast.  That is actually what I am firmly believe.

Other thoughts are welcome. 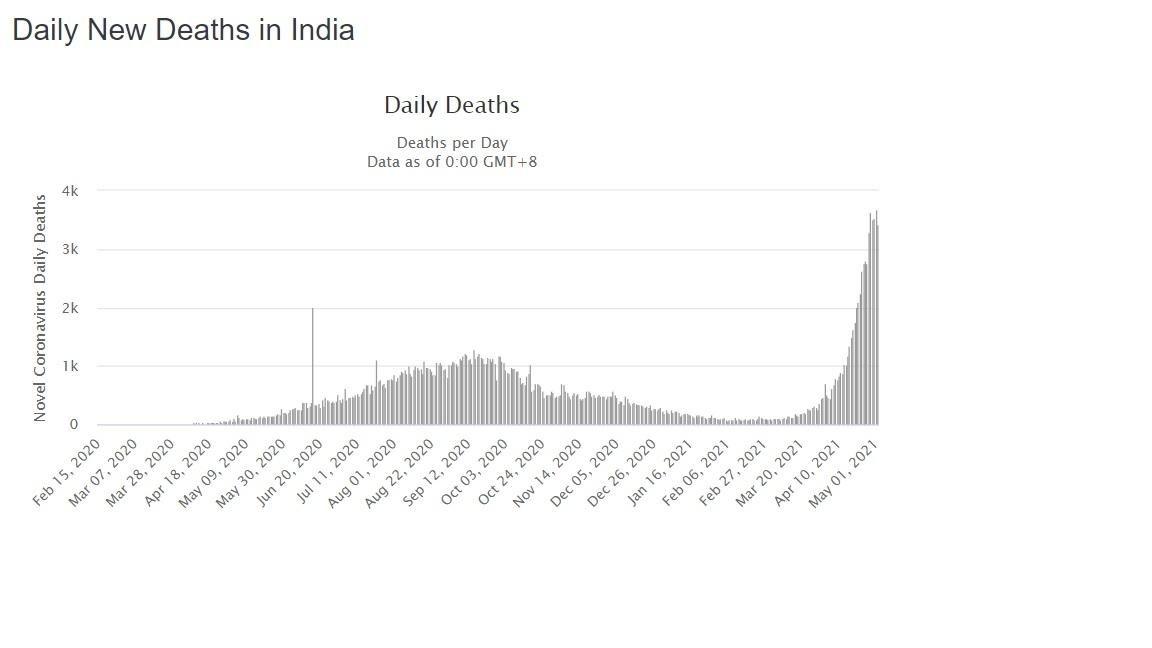 from jim h ^ and nordicjack \/

“The problem is with what we are seeing is so inconsistent with what we were seeing previously, it is not logical.   For a country that has 1.5 billion people, it doesnt make sense they could keep covid in the box, and then in 1 month balloon.”

To me, the huge rise over the past month suggests: a variant that’s multiple x more contagious than Covid-19, hitting a totally naive population (not plausible), or, much more likely, the numbers are being messed with, to scare the holdouts in the UK, US (which includes me, but I’m a lot more annoyed than I am scared.)