In the Path of Destruction of Irma.

Morpheus here, Long time original member, been inactive quite a while here but not inactive in my preps for “whatever is to come’.

I live in Palm Beach Cty Florida and right now both the US and European forecasting models have a Cat-4/Cat-5 eyewall slamming right into my house.

Maybe not as bad a a currency collapse, but it will be worse for me.

Anyways, to make a long story short, we think that we are well prepped, at least we thought so.

But crisis’ of this magnitude get you to think even deeper than you normally would. And boy o’ boy, I wish I had thought deeper.

We’re better prepped than 99% of the population out there but now all that procrastination over the years is grating on me like sandpaper.

Ohh the easy things that I could have done a month ago, 6 months, a year ago.

In fact, I’ve been feeling smug at how well prepped me and Trinity are. Except we never got that portable solar unit. We never prepped for the loss of our structure. We have months of food but that Wise Food shipment, due next week, would’ve helped with energy use reduction.

The point is, if you’re feeling pretty good about your accomplishments then I’m willing to bet that there are a handful of things that you haven’t done yet. Don’t wait. Don’t get smug. We had a week’s notice and did better than everyone else BEFORE that notice. But with a week’s notice the clock’s up. Too much competition. Good luck getting stuff. Most crisis’ are not going to give you that additional “code Red” time.

Get going folks. You do not want that sick feeling that Trinity and I have now, as well prepped as we are.

It's good to hear from you again, but sorry to hear that you are in the projected path of the most intense storm … on record.

I doubt you missed it, but I'll cross-post it here anyways, which is Rector's early observations from being impacted by Harvey.

We live south of Corpus Christi and Harvey just missed our area.  We began the usual fire drill of preparing for the hurricane, but it veered north just in time.  Bizarrely the follow on weather was delightful – sunny, crisp, and breezy – while the rest of the gulf coast became an apocalyptic nightmare.  As I watched the news I was painfully aware of how close we came to being flooded, displaced, and disrupted.

As a card carrying member of the Peak Prosperity Preparer's Club – I came to the realization that Chris articulated – nothing can prepare you for this kind of Black Swan event.  No matter what – losses will occur.  My takeaways after being grazed by the Harvey bullet are (so far):

1.  Be prepared to accept refugees.  Family members are on the way (I think).  At this point they are without resources and fractured.  Dad is a cop and cannot leave Houston.  We are happy to accept them into our home – but it wasn't exactly planned.  In a wider emergency the same might happen and I will say yes then too.  I need to expand my preparations for the likelihood of more people camping out with us.  Turning everyone away outside of a pandemic scenario is not an option (really).  What's the point of all this anyway if you can't help people?

2.  Being 5% prepared is WAY better than zero.  As I watch people in Houston it has occurred to me that I need a boat.  I live on a body of water which has flooded before and will flood again.  I built my home well above the flood plain – but Harvey just made a joke out of that math.  As I watch people wade in chest deep water while others float by in boats; I'm buying a boat.  Today.

3.  Being prepared is great!  I needed to do NOTHING to get ready for the hurricane at my home.  Turns out that was really helpful because my time was spent getting other people and places prepared.  All of my employees (save one) asked for the day off (to get their homes ready) leaving me alone in my preparations.  Thankfully I didn't have to waste time at the gas pump, ATM, or the grocery store.

4.  Evacuation plans are a real priority for me now.  With four kids my mental default position has been to "hunker down".  "We don't evacuate for hurricanes here" has been the attitude because we are prepared and have always done well.  Harvey has demonstrated this is NOT ALWAYS POSSIBLE.

I will now focus my considerable prepping energy to developing a viable evacuation strategy.  Not an overland hike in ghilli suits – but a real strategy to get this group of people somewhere else quickly and safely.  Routes in every direction.  A list of destinations.  Checklists for packing, securing, and evacuating.  Documentation, asset relocation, etc.  I am even going to develop a plan to go into Mexico.  I had a day and a half between threat presentation and expected landfall.  Some events may present even less time.

5.  I need to be able to execute a plan at less than 100%.  As luck would have it, I pulled a muscle at CrossFit a week before and would have needed to do all the above while limping around in pain.  I represent the lion's share of muscle power for the family – but can they execute in my absence or incapacity?  Hmm. . . not ready for that.

6.  It is possible for two bad things to happen at the same time.  The financial crisis could begin, North Korea could strike, or any of the other crap I worry about could commence at any moment.  WHILE LIVING IN A FEMA SHELTER because I hadn't planned on evacuating.  Am I ready to execute trades, etc. while in that shape?  Hmm. . . not ready for that either.

I am thankful that we were spared the apocalypse but it has (again) identified holes in my plan that are the result of false premises.  Challenge yours because you just can't make this stuff up.

Your and Rector's observations have really gotten me thinking…the idea of a catastrophe that results in the loss of my primary structure is not something I have planned for.  Sure, I have plans to be able to cart away a good chunk of my most valuable possessions (water filter, spare food, cash, etc) as we have a van with a tow hitch and a 10' trailer, but that's cold, thin comfort to just how badly my preparations would otherwise be impacted and set back by the loss of what was left behind.

I assume people under fire threat in the west face the same difficult decisions and possible future.

This all leads me to really be reconsidering how to go about being even more resilient.  I keep coming back to the idea of owning a second place, even if it's a small cabin on an acre, somewhere well away from the primary residence.

Best of luck, and for everyone's sake, I wm wishing that Irma loses strength and wobbles east.

When you are able and if you are willing, we'd all love to hear the after report from you.  The good, the bad and the ugly.  That's how we learn.

I'm in Vero Beach, just up the coast from you.  We, too, have food and water for months but no solar and no contingencies for the loss of a primary dwelling, which I have no intention of leaving since that's where all the preps are in the first place, as well as all sorts of things I'm not going to just abandon.  So we'll be armoring up, hunkering down & hoping for the best.

Have you considered evacuating?  Depending on your specific location, the storm surge could be huge and winds ferocious.  How high are you above sea level and how far inland?

I am no veteran of hurricane country like some of you, but I am a big advocate of retreat in the face of overwhelming adversity!  Doug's advice sounds smart to me. 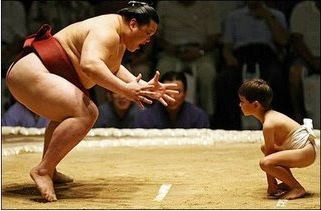 The Hurricane Center has the wind velocity predictions. Pretty nasty in Southern Florida. 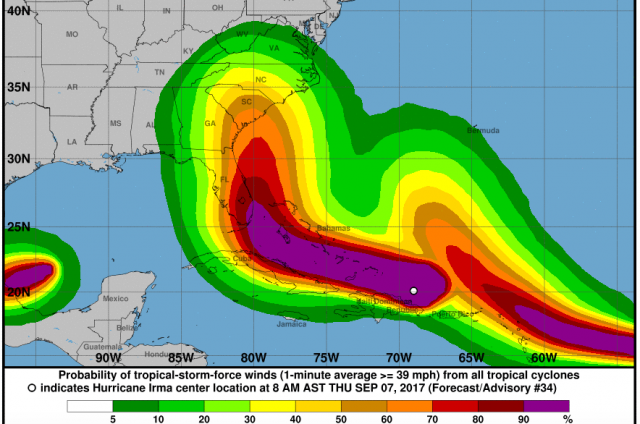 …although not necessarily in the current conditions!

Will have a good thought for you & Trin (and the rest of the E Coast of FL).  Keep us posted on how you go.

FL East coast man-made beaches (i.e. former wetland buffer land) may all be swept away if Irma goes up the coast.   Mommy, where's the beach?   There are nuke plants to consider too.  Man builds cheaply and pays the price.

Have you considered evacuating?  Depending on your specific location, the storm surge could be huge and winds ferocious.  How high are you above sea level and how far inland?

Evacuate to where? A one degree shift in any direction will make anything short of a full blown exit from the state just as risky.

Leave Florida? It's 350 miles to the GA border and gas is no where to be found in the state. Now add gridlock traffic to the mix. VERY risky proposition indeed.

It's the ultimate catch-22.

That's not the impression given by your governor.  As I recall his news conference this morning, traffic is flowing well and he encouraged people to buy no more gas than they need so that those evacuating have enough.  I don't believe he mentioned length of gas lines, but he strongly suggested that people evacuate.  And, there is still 2 1/2 days before Irma is supposed to hit south Fla.  Of course, he may be full of BS.  His stance on climate change suggests he isn't really reality oriented.

You are much closer to the situation than I and you certainly know the terrain better.  Best of luck whatever you choose to do.