I wish there was something like this in my country )-:

I mean I wish there was a website/community like Peak Prosperity in German.

Cause the situation in Germany is a total mess. They already implemented “the lock-down for the unvaxxinated” in Austria and they are about to do the same in Germany and on top of that they are working hard on people who are unvaxxed loosing their jobs. So basically if you wanna keep your job, you now have to get jabbed (2 times for now, but 3 times soon) and yet there is no meaningful resistance and the only resistance there is at all is a bunch of lunatics that believe WWII is still ongoing, the holocaust didn’t happen, the earth is flat and Klaus Schwab is a reptilian *sigh*

And I am NOT exaggerating as ALL of the people I know personally are either genuinely crazy like that or embrace all the jabs and restrictions and hate the unjabbed. There seems to be no middle ground at all – or at least I couldn’t find one and it’s not from lack of trying. Now admittedly some of those total tinfoil heads on the Internet are trolls. But it works quite well as all the anti-vaxxers here in Germany seem to go along with the anti-semitic conspiracy theories these Antifa trolls want them to spread, cause they can then label anyone criticizing the jab and the policies as a Nazi and sadly that tactic works great and has effectively neutralized any resistance towards the increasingly draconian Corona laws.

So I guess my point is to warn you guys about this tactic. Antifa always employs tactics like that. And also if you know of any German website/community that isn’t extremist, let me know. Cause so far I have been kicked out of all the bigger German Telegram groups regarding Corona. The pro-jab ones kick me out cause they label me a Nazi for questioning the effectiveness of the jab and the mandates and anti-jab ones kick me out for questioning if there really was no Holocaust as many of the people on there claim…

Chris mentioned the 10 stages of genocide: 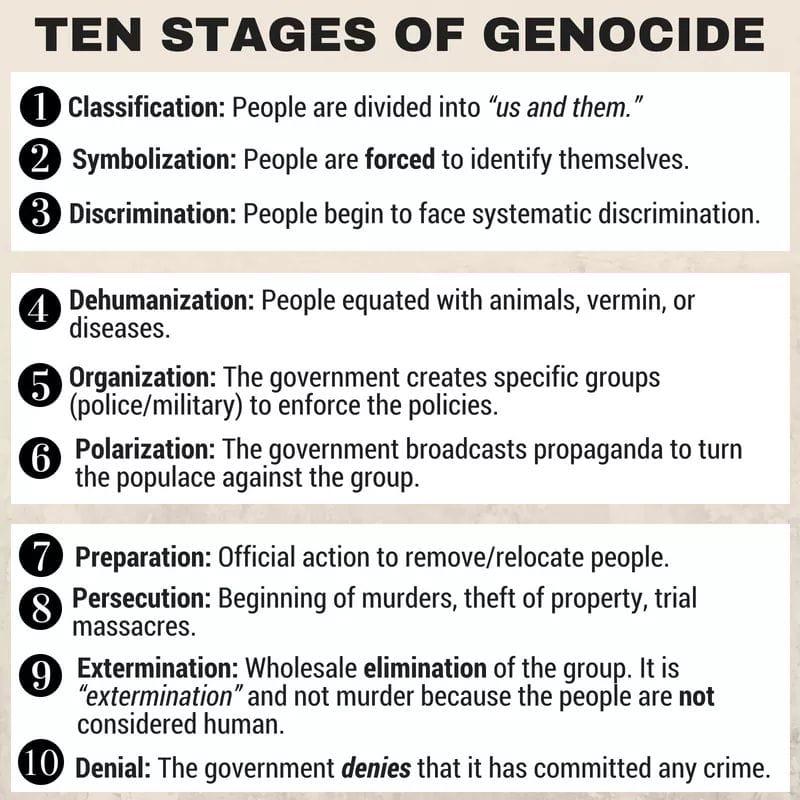 Every day you don’t have some big pharma tech in your bloodstream is a good day.

Just got done spending the past 4 days at a beach house on the gloomy Washington Pacific coast with the fam and some good friends, not one mRNA infected person there. No internet and spotty cell service, hell, we lost power for a while but had a wood stove. It was nice to get off the grid for sure.

I know I’m rambling there, but just trying to say a lot of people know we’re waste deep in bullshit. Just got to keep grinding on these people that have been scared into trading their rights in for privileges. There’s gonna be sacrifice, but like I said, every day without big pharma tech in your bloodstream is a good day.