While I was in a doctor’s office waiting for my appointment, there was a TV on in the waiting room. The show being broadcast was “The View.” They had a featured piece about a woman who had received the vaccine but had gotten Covid 19 anyway. They did a remote interview with the woman who stated that she felt pretty ill with fevers, loss of taste, loss of smell significant fatigue and so on.

Was there any questioning of this woman about the lack of effectiveness of the “vaccine?”

Instead, the infected woman said she was happy she got the vaccine since it provided her with one hundred per cent protection against death.

Well, of course, that is simply not true.

Did the interviewers on “The View” correct that misstatement of fact?

Instead, these airheads on “The View” praised her for her smart decision making.

The woman who had Covid 19 said that she had caught Covid 19 from her son. He son had not been vaccinated. She made it clear that she believed that her own infection would not have happened if her son had been vaccinated.

Did the airhead interviewers on “The View” point out the logical contradiction. This woman herself had been vaccinated and had gotten Covid 19. So obviously it would not have prevented her son from getting Covid 19 either. So was that logical contradiction pointed out?

It gets worse. Much worse.

The son has apparently recovered from Covid 19 but the woman being interviewed said that she is going to work hard on convincing him to now get the injection.

Did the airhead interviewers on “The View” point out that the son now has natural immunity and doesn’t need any vaccine?

I tried to relocate as far away from the TV as possible but I could still hear this inane drivel.

My only consolation is that my own TV at home has been disconnected since last October so there no chance of my being exposed to such stupidity.

“The View” lol. Enough said. Did you complain to the staff about the choice of programming in the lobby? Maybe point out that hosting a show which disseminates covid misinformation in the lobby of a Dr’s office might not be appropriate?

IMO it would be appropriate to call back today, speak with the office manager or owner and request the View not be shown.  Explain your concern about the misinformation being presented and suggest game shows.

My view (see what I did there?) Is that these interviews are planned pretty carefully.

They set out to give the messages you identified:  Vacciated are safe from covid especially if they get covid.   Vaccinated get covid from unvaccnated.   Unvaccnated who recover from covid easily can only be saved by vaccine.

Because they are all sick in the freakin head!!!  I’m actually so sick of stupid people.  I’m sorry but my level of tolerance for the stupid is absolutely at a negative number.  I think besides morale, it’s really my intolerance to live with sheep anymore!  I know that maybe I am a victim of “them vs us” theory but so be it…

Someone wrote something about vaccinated people are actually suffering from an agent they inserted to make them more compliant… something like that.  I BELIEVE IT.  But… I also think it starts with people who don’t have critical thinking skills.  Maybe we really are doomed.

Here’s a fearful leader in Australia warning you not to talk at all, even with a mask: 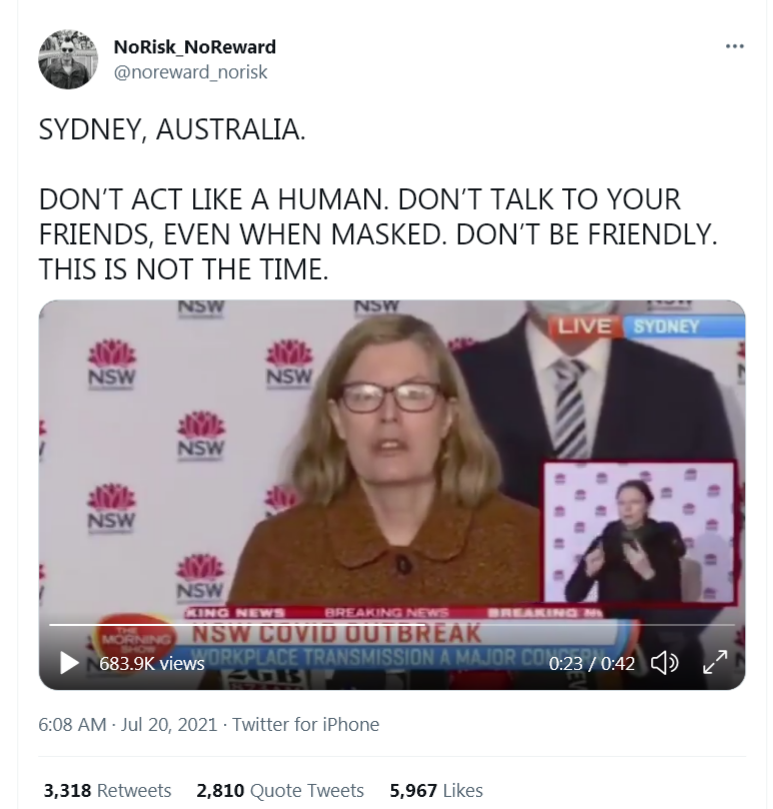 The level of stupidity is pretty close.

Oh, thanks for the gut laugh goldrunner1!!  I needed that!  I’m going to be giggling about that all day!

Mike – I agree with Wothecurtains that this was scripted, as the messages are too obvious, and the interviewee likely jumped at an opportunity to be on TV.  But this thinking seems fairly common, as most people do not think their own thoughts, and the truth is being effectively censored.  In addition to the ubiquitous propaganda campaign about both the virus and the Covid shots, it should be remembered that some weeks after the epidemic was allowed out of China to spread all around the world, we learned that many people were not showing antibodies to the virus after just a few weeks.  Also, some people were reported to be getting it a second time, or a third.  And many people know someone who has died after contracting it.

My sister and her daughter caught Covid during a Christmas trip to Florida, and were gravely ill upon returning home in January 2020 (ie. supposedly before it had arrived in North America and before most people had even heard of it).  As soon as vaccines were available this winter she signed up and she tried very hard to convince me as well, arguing that she had been so sick the previous winter that she thought she was going to die.  Remember the video Chris showed of the beautiful woman who had been so full of life but was lying in a crumpled heap on the floor?

People are afraid of Covid and of dying, and they are believing the hype that only the C-shots will prevent death, and either give them immunity or keep any illness at a mild level.  They also get messages that the ’unvaccinated’ are lepers who may spread disease to those in the ‘vaccinated club’.  They do not (yet) get many messages about vaccine related deaths or serious adverse effects.  In conjunction with the aggressive vaccine campaign, my understanding is that the PCR testing was changed, along with a change in how deaths are counted (concurrently in many countries), so that it would appear the vaccines are working.  Most people I know seem to think it’s perfectly safe to live again and socialize after ‘we all get our vaccines’.  And these are not low IQ people.  It’s frustrating and sad, but it’s how mind control works…..

Edit – to clarify – the lady in the video wasn’t my sister, but she was like her (had hypoxia, among other symptoms, and kept fainting)