Hydroxychloroquine vs The Globalist Deep State

The video is completely negative.. a real joke.  It does though give me hope that the US is actually catching on en-mass.  Just look at the comments.. they are SCATHING!

MY 97 year old uncle was on a respirator having The virus – they made my cousin sign a waver and gave it to him, next day off the ventilator breathing on his own no fever and recovering. I am not suggesting this is a “cure all” maybe it works for some and not others, but it worked for him?…


That WAPO video was remarkable.  It did not mention the randomized trial from China, which China delayed releasing (for reasons unknown), nor did it mention how many nations are already using HCQ in their treatment guidelines.

If this continues, TDS might end up being actually fatal – for some people.

It is generally known that during times of rising stock markets, incumbent presidents tend to get re-elected.  This would favor a Trump re-election.

On the other hand, a pandemic, economic chaos, stock market crash, food insecurity and wide spread civil disruptions would favor the “non-Trump” over Trump.  Especially if blame for all of the above could be attributed to Trump and made to stick in the public perception.  (He failed to respond to early warnings, down played reports, ignored early stages of spread into the USA, failed to activate the public health apparatus to test, isolate and trace the infected.)

But hey, if your group owns much of the news media, social media and writes the search engine algorithms, then making blame “stick” is doable.

I wonder who the MEGA group desires as the next president?

When journalistic “mistakes,” all favor one outcome–letting this pandemic go big, long and devastating–then we must question the actual intentions.

The sad thing is that they would rather see thousands die unnecessarily (they know it works) than allow Trump to be re-elected.

India:  Using HCQ for PREVENTION of CoV infection in healthcare workers and caregivers of those with infections. (source and here and here

Hydroxy-chloroquine has been recommended as the use for preventive treatment of healthcare workers and individuals in close contact of coronavirus patients.

The National Task Force for COVID-19, constituted by Indian Council of Medical Research (ICMR), made this recommendation on Monday, March 25.

… asymptomatic healthcare workers involved in the care of suspected or confirmed cases of coronavirus. Its use in prophylaxis is derived from available evidence of benefit as treatment and supported by pre-clinical data.”
“Secondly, it’s recommended only … for prophylaxis… for prevention.”

According to the drug prescription, for healthcare workers, a dose of 400 mg twice a day on day 1, followed by 400 mg once weekly for next 7 weeks, … take with meals.

In case you have not seen the news today;

Small Chloroquine Study Halted Over Risk of Fatal Heart Complications
A research trial of coronavirus patients in Brazil ended after patients taking a higher dose of chloroquine, one of the drugs President Trump has promoted, developed irregular heart rates.

What could have gone wrong?  Jim H has been telling us stories from Dr. Zelenko and others who say they have not run into any instances of these theoretical side effects.  Hmmmmm.. let’s dig into the Brazil study a bit more then;

About half of the participants were given 450mg of chloroquine twice a day for five days, while the rest received two 600mg doses for 10 days. Doctors started noticing heart arrhythmias in the second group after three days. By the sixth day, 11 patients had died, The New York Times reports. As a result, the researchers stopped the high-dose segment of the trial.

As for the lower dose, the researchers said they did not have enough patients to conclude if chloroquine was effective in patients with a severe case of COVID-19. More research on the matter is required, including the use of the drug earlier in COVID-19 therapy. The study is available here, and still needs to be peer-reviewed.

Knowing what we know, that this drug has a long half life, and that a, “normal” dose of HCQ for arthritis is 400 mg/day (see below) … exactly what did the Brazil doctors think was going to happen in the high dose arm of their study.  Looks like it was designed to fail, to me.

HCQ treats rheumatic conditions as mentioned previously in this article. It also has utility in the treatment or prevention of malaria. For malaria prophylaxis in adults, start 400 mg HCQ once a week from 2 weeks before until 8 weeks after travel to an endemic area.  The adult dose for the treatment of malaria is a total dose of 2000 mg divided over 3 days for patients over 60 kg and for those less than 60 kg, 25 mg/kilogram divided over 3 days.  For rheumatic diseases, the most common dose is 400 mg per day.

Let’s not forget some of the early data as we close this episode of hydroxychloroquine vs. The Deep State.  An oldy but a goody way back from March 18;

Hydroxychloroquine, a less toxic derivative of chloroquine, is effective in inhibiting SARS-CoV-2 infection in vitro

Finally, two excellent hydroxychloroquine-supporters, an MD/MS cardiologist, and  DO/PhD surgeon Ban Truong, talking in depth about this very topic, the cardiac side effects of these (i.e. HCQ + Zithromax) as well as other drugs.  They both downplay the concerns given the alternative of death on a ventilator;

Jim, you missed the punchline.  NYT buried the lead, of course, saving this until the end of the article, which virtually nobody actually gets to:

Dr. Bushra Mina, the section chief of pulmonary medicine at Lenox Hill Hospital in Manhattan, said the study would most likely not change his hospital’s practice of giving a five-day course of hydroxychloroquine and azithromycin to hospitalized patients who were not severely ill. Dr. Mina said patients are monitored daily for heart abnormalities and the drugs are stopped if any are found.

A real doctor, working in Manhattan, wasn’t impressed with the study either.

I can’t wait for the studies to come out.

The fatal cardiac arrhythmia that has a very loose connection with HCQ is called “torsade.”  It also goes by the names of “torsade de pointe,” TdP,  Polymorphic Ventricular Tachycardia and PDT.    Simply torsade identifies the rhythm.

Here is an example of a sudden transition from normal sinus rhythm to torsade.

Chloroquine and hydroxychloroquine (Chlor/HCQ) are known to MILDLY prolong the QT interval.

The QT interval:   Since the EKG paper runs at a constant speed, longer distances on the paper indicate longer time intervals.  The QT interval is the distance (or time) between the Q wave and the end of the T wave which are marked below.  To add one more element of complexity, the QT interval changes with heart rate with faster heart rates having shorter QTs.   So a correction factor for heart rate (the RR interval)  is commonly added giving the “corrected QT” or “QTc.” 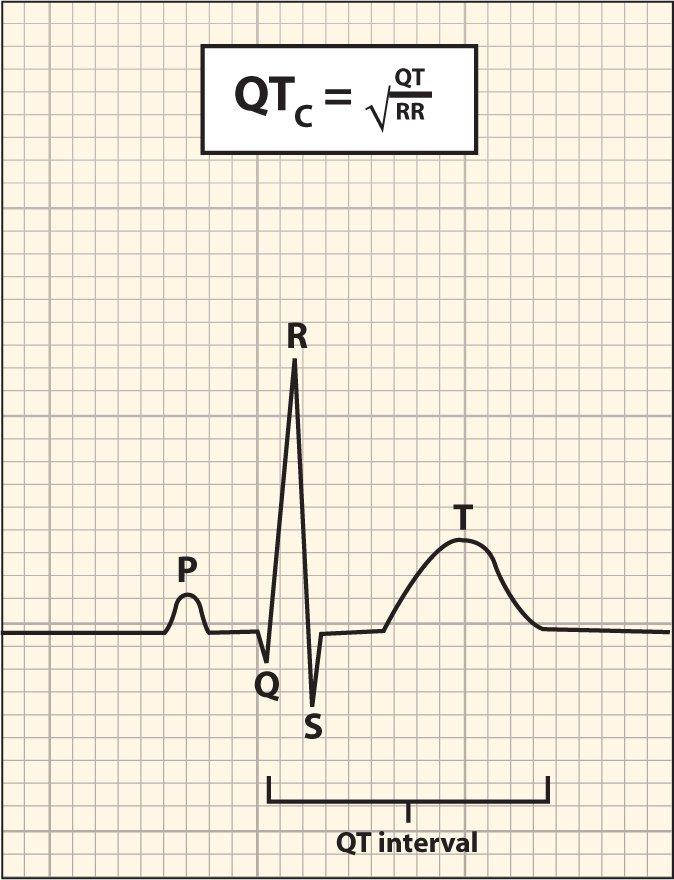 An article in Cardiology Magazine summarizes the thinking about HCQ and the very low risk of the rhythm, torsade.  Quoting from Ventricular Arrhythmia Risk Due to Hydroxychloroquine-Azithromycin Treatment For COVID-19, Mar 29, 2020 Cardiology Magazine

Drug-induced QT prolongation has long served as a surrogate indicator for increased risk of drug-associated torsades de pointes (TdP), a potentially lethal polymorphic ventricular tachycardia. However, the relationship between QT prolongation and risk of TdP is imperfect and complex. The risk of TdP is not a linear function of QT duration nor the extent of change; some drugs which prolong QTc are not associated with increased arrhythmic death.

Although only a small proportion of patients with QTc prolongation suffer TdP, drug-associated QT prolongation is associated with increased arrhythmic and non-arrhythmic mortality and it therefore continues to be an important metric of drug safety.

Chloroquine, and its more contemporary derivative hydroxychloroquine, have remained in clinical use for more than a half-century as an effective therapy for treatment of some malarias, lupus, and rheumatoid arthritis. Data show inhibition of iKr and resultant mild QT prolongation associated with both agents.

The safety of QT prolonging medications may be maximized by close monitoring and optimization of these factors. A risk score has been derived.  [Table in the original article].

Many commonly used medications prolong the QTc.  Yet their value outweighs the danger of the low risk of torsade.  Examples include pepcid, zofran, geodon, haldol, amitryptyline, fluconazole, etc.

I have seen protocols for centers giving HCQ in COVID and they include IV Potassium and Magnesium supplementation. Seriously sick people are low in potassium and magnesium which are themselves risk factors for arrhythmias and torsade.

Why the “Trump-drug,” HCQ has vaulted into such a special danger category does not make a great deal of sense to me from any medical stand point.

I draw your attention to the question asked at the 9min25:

Do you have any new information about the toxicity of the HCQ+ZPAC?

We have seen with our cardiologist friends some cases that they prefered that we not use this treatment – so we did not treat them. That did not represent many people but was not worth the (trouble) to take unnecessary risks and secondly regarding the 2.600 patients that we treated – there was no problem – that starts to be an important number of cases treated.

Here around the 10th minute I particularly like his simple (and efficient) way he treats the subject. I underline that it used to be that way in America – something has gone dramatically wrong with “American know-how”. If you think I’m trying to piss you off (so you spring into action) you are RIGHT!

He starts talking about the way politics crept into the way the virus was treated – he holds up a chart with industrialized countries and their poor results. He then talks about Asia and Africa saying they don’t have any stigmatisation about taking a simple pill which doesn’t cost much.

That which shocks me in the present situation is that the present mortality in the richest countries is much more “important” (higher) than either in the Orient (some of them are rich) or in the poorest countries and one ends by asking ‘are the new types of medication’ – have they become an advantage or an inconvenience (disadvantage). Manner of saying the people in Africa don’t have alot of choice so they don’t ask alot of questions before taking Paquenil and Az – it costs them next to nothing.

Tandis que – While in France there is a struggle, extremely brutal against the usage of these medication simple and non-expensive – which I don’t know if this has consequences on the mortality in France, but it is a good question, nevertheless when you see the level of mortality at Marseille compared with other localities in France with a population and a state of epidimity comparable – one can frankly ask oneself some questions – like whether it is better to take an old medication which works or new medications which we are not sure they work (or not) – and that we know that they have complications and very important secondary effects.

He had been making light of the fact that if he was an advisor to Sanofi – comparing the results in the stock market he was doing a poor job versus Gilead a rival – that he should have been ditched.

UMC has taken an important step to be more like Zelenko and treat high risk patients with hydroxychloroquine BEFORE they are ready to go on a ventilator.  Bravo!  We are making progress here and the results will become more and more apparent.

BTW, in case people didn’t catch it Andrew Cuomo of CNN has been rethinking his role in the propaganda mainstream media… I fully believe that the heat is coming and that he can see the writing on the wall;  Seditionists in the media will either have epiphanies, or go to jail, or worse.

And now, back to our hydroxychloroquine show;