How To Make A Raised Bed From Concrete Blocks

I posted about my sub-urban garden in THIS POST and used concrete partition blocks for the boarders of the raised beds. I had someone ask me if I had pictures of how I built them. Yes, I actually shot pictures as I constructed them, so here is how I did it. Hope it helps anyone looking to do the same.

First, clear away the grass from the area you're going to use. I prefer using a flat blade shovel. It lets me slice under the grass, taking off just the top inch or so of soil. Use the blade to cut the ground into blade size chunks then push the blade under the edge and gentle wiggle it back and forth while pushing with your foot. I then use the grass sections on other areas of my lawn that are bare.

(This was taken a bit later in the process, since you can see the first two blocks are already laid. I just forgot to get a good shot of this, so I took it when I remembered I needed it.)

Second, once you have the beginning area cleared of grass, dig down to the depth you want your blocks planted. I go down about 2 inches. Scrape away the soil until its nearly level. Then take your shovel and lightly break up about 1/4 of an inch of soil where you will be laying the side blocks.

Then, using one of the blocks, tamp the soil down. Try to keep the area level.

Fourth, remove the grass from an area about 24" long and as wide as your ends. Dig down and repeat the step for placing a block on the back side of the bed, in my case the one against the fence.

Fifth, once you have the block in place, begin to break up the ground inside of the bed as deep as you can. in my case it's the depth of the shovel blade, or about 6-8 inches. What you are doing is making the soil loose and easy for the plants' roots to get through and establish themselves. Leave an area in front where the next block will go.

Sixth, continue to remove the grass, this time back about another 18 inches. Once you have, repeat the steps and place the next rear block in the ground, then the first front block. I toss the loosened earth into the space between the blocks. Go ahead and pile it to the top, you'll have a chance to level it out once you finish.

Seventh, just keep doing those steps until you reach the length of bed you want. In this case I'm going seven blocks long and two wide for a bed of approximately 9 1/2 feet by 2.

Eighth, once I reached my length I made sure the bed was loose, then removed a full wheel barrel of dirt from the bed, then placed my final end blocks. At this point I fill in the exterior of the bed edges, and if I have large areas, like at the ends, use some of the earlier grass I removed to patch that.

Ninth, I added in 2 sqft of compost and worked it into the bed, turning the soil over and mixing it well. Some will point out that I made a mess of the bacteria and natural soil composition by turning it over like this, but this is the initial stage of establishing a raised bed. I'd rather accept that for the trade off of loosening the soil and making it more fertile with the soil additions. The beds established last year had the compost added to the surface and worked in to just a few inches, keeping the helpful bacteria alive.

(Note: At this point I added my pvc watering pipes. You may just consider skipping those and continuing on.)

Next, I dumped about half of the wheel barrel load back in and mixed it again. Finally adding another 2 sqft of compost and then the rest of the dirt, working that in as well.

And Finally, once you do all this you get a raised bed ready to be planted.

So this bed ran me $19 for the blocks, $16 for the compost, and about 8-10 hours of my time. (Add another $5 for the pvc watering system) Some people could do it quicker because I spent a lot of time loosening the soil because its a sub-urb and poor soil at that. Then I'd rather spend an hour or two more and give my plants a head start.

If you do one of these, please post pictures to this thread and any hints or problems you have.

Hey DT -Very nice job on the block garden and thanks for the step by step!

Don’t have a yard without pulling out the bricks, so I am going the self-watering container route. Storage tubs; 4″ drip leachlines from Home Depot, covered with flexible leechline netting, and drainage hose at bottom and filler hose (5/8″) at top. 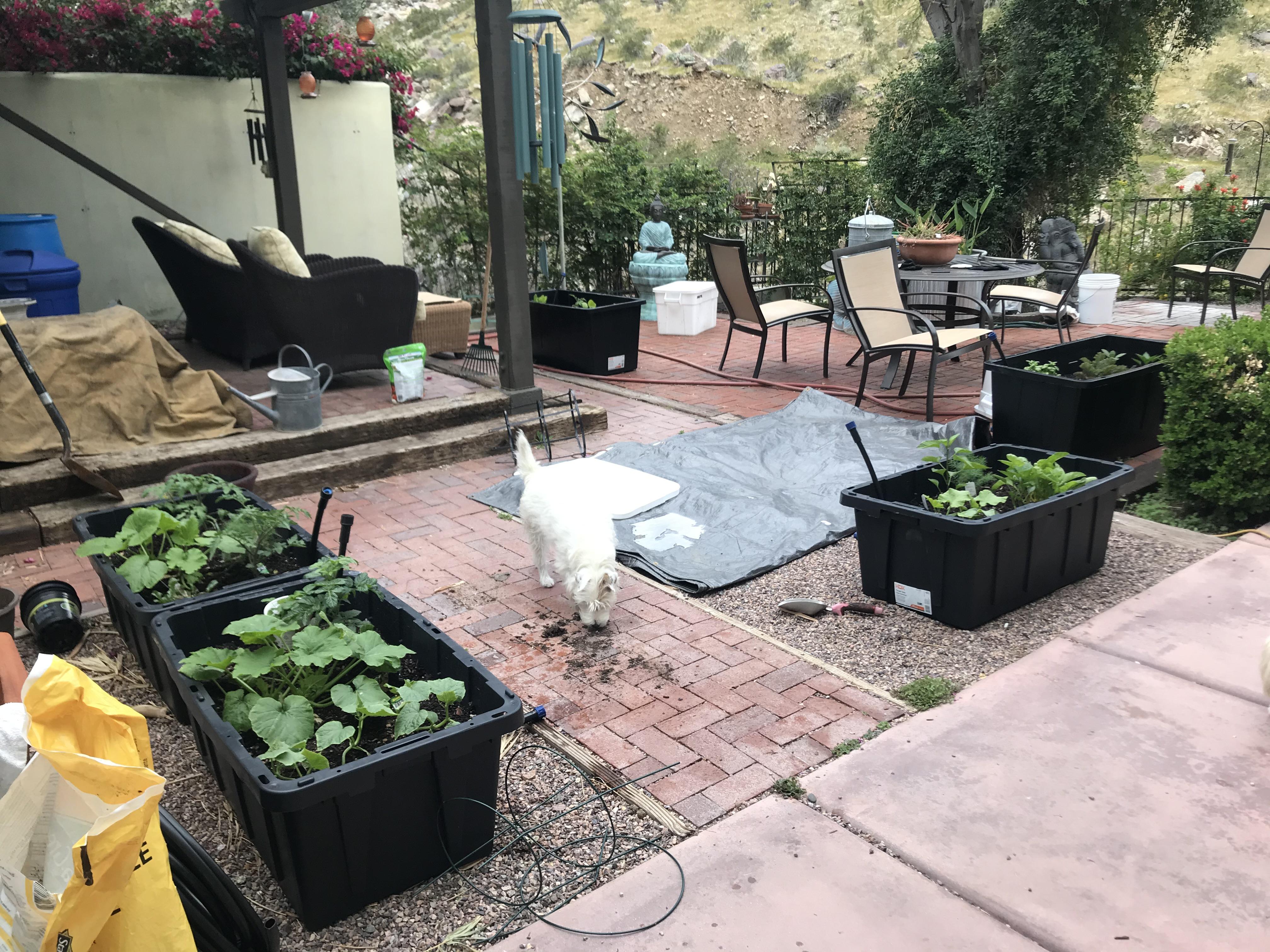 Yes, I love self watering containers for small and even larger gardens. In small ones, or even apartments that just have patios, you can put them anywhere and move them to get the sun.

In larger gardens you can use them for perennials like your herbs, and bring them into the house or garage for winter.

I use 2 and 5 gallon buckets. Here’s a tutorial on them: