How to get a jab, but not

I am not comfortable taking it as prophylaxis in recommended doses.

I am reserving the addition of IVM (at 0.4 mg/kg) to my protocols for onset of ANY symptoms, even the most mild, and ANY known exposure, even the most remote.  I continue otherwise upping my prophylaxis game week-by-week.  This week I invested in higher bioavabilability forms of curcumin.  Today I bought some straight bromelain so that I can make my own high bioavailability (phytosomal) quercetin + bromelain mix.  My gut says this is the way to go…. i.e. broad cocktail daily but reserve the heavy hitter IVM.

Greenlight for Ivermectin in Japan

Article at gnews reports on announcement by Dr. Ozaki, chairman of the Tokyo Metropolitan Medical Association– Greenlight for Ivermectin in Japan.  Excerpts in italics with my bolds.

Since Tokyo summer Olympic Game ended …. the pandemic as Japan is now in its worst surge ..with… new cases were reported at 20,140 on August 14.

Deaths aren’t as high as successive waves of the pandemic from February 2021 to the end of May, but nerves are frayed with record numbers of infections. Dr. Ozaki, The chairman of the Tokyo Metropolitan Medical Association, recently led an emergency press conference on August 13, Dr. Haruo Ozaki shared those 18,000 new infections are reported daily. However, the death count has eased as compared to previous surges.

How to deal with the current dilemma is a huge challenge to Japanese government and medical agencies? Fortunately, India has an excellent testimonial. Since April 28, India medical officials started providing Hydroxychloroquine and ivermectin to its massive population. As India is the major pharmaceutical manufacture in the world, they were ready for this massive drug distribution. Miraculously, COVID cases have plummeted quickly since then thanks to the new rules. 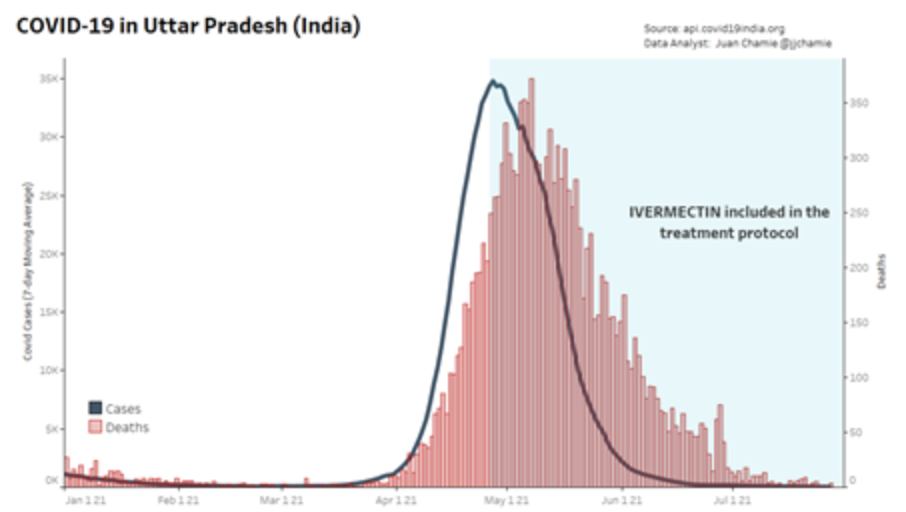 Dr. Ozaki declared that ivermectin has demonstrated significant benefits in reducing infections and deaths where the regimen is prophylactically administered for another indication. With the encouraging medical data from ivermectin clinical trials’ reports worldwide, especially the one from FLCCC of US and BIRD of UK, the head of the Metropolitan Medical Association declared that while clinical trials were important, it was time to greenlight doctors to prescribe ivermectin in association with giving the patient informed consent.

Finally, greenlight for Ivermectin is on in the first developing country since the start of the COVID-19 pandemic, giving hope to all countries and regions. Perhaps this time because Japan did not have the big Pharma entering the COVID vaccine market, the government did not get much pressure.  So the Japanese government’s anti-epidemic policy basically reflects a normal democratic regime should do, that is, to protect the health of the people. Expect the miracle of ivermectin in India to happen again.

Good linky there, Mr Ed was able to order a couple more tubes and checked out with PooPal (back in your face big tech!).  BTW, he like to chase his blob of IVM with a shot of Apple Crown (gives taste to the aroma).

Sandpuppy, thanks for your posting about news of ivermectin in Japan.

1. the guy quoted: Dr. Ozaki, head of Japanese medical association of Tokyo has been publicly making these statements (greenlight for ivermectin in Japan) for more than 6 months now.  I don`t know if his speeches have had an effect. I dont think that ivermectin is approved in Japan.  In contrast, Japan approved remdesivir within 3 days of a request that came from a trusted, big American company that is linked to the banking and diplomatic industries.

2. I had heard that someone had managed to scare non-infected patients for trials away with news stories about the dangers of the dreaded compound ivermectin.  This kind of misuse of the TV media happens often in Japan and even affects McDonalds (worms in hamburger), and the solar industry (solar panels kill, nuclear does not). This might be why the kitasato “clinical trial” only includes doctor recommended sick patients.

3. Kitasato University (within which ivermectin was discovered) has planned a trial CO-MANAGED OR RUN with MERCK for according to news reports for some months now.  Here is what their website posted a few weeks ago in early August:

According to the ivermectin clinical trial approval document cited in the link, 1. only Kitasato University is paying for this and 2. the study protocol only gives a single pill once
“ivermectin group:  Ivermectin approximately 200 microgram per kg administered as a single oral dose on day 1 (fasting state) placebo group placebo without ivermectin as an ingredient, single oral administration on day 1 (fasting state) on day 1 subjects take the study drug (3 mg tablet of ivermectin) or the control drug (ivermectin placebo tablet) at the dose of the study drug taken once per body weight of the subject.

so about 15 milligrams is given once on an empty stomach, not with a meal.

This seems to be about 4-10 times less than what is recommended now over 3 days by the ivermectin community in the US and probably the patients have the Delta variant, which has taken over in Japan.  Also, I wonder how much less is absorbed on the empty stomach. Anyway, unlike the Argentina study, which did not exclude previous ivermectin eaters, no one is allowed who has taken ivermectin 30 days previously.

I would expect that (if Merck Japan stays out of it) they may find a small barely significant effect on the end point (time until negative SARS-2 DNA assay result. This will be followed up with numerous mass media reports on how the dreaded ivermectin causes kidney disease and that the benefits do not outweigh the demerits.

No, I am not optimistic.

Spork: “best would be for them to squirt it in the sink and fill out your paperwork with a fresh Franklin in they pocket.” That is what I want if it comes down to being coerced. But what if they decline the Franklin? I would rather know in advance someone who would squirt it in the trash. There are quite a few healthcare professionals in here. Hoping maybe some would weigh in with their thoughts.

Unfortunately, in the comments section of the rclutz article, I found the following:

“Sorry, but this is a totally wrong interpretation of what Dr. Ozaki’ said. He said: “…IT WAS TIME to greenlight doctors to prescribe ivermectin in association with giving the patient informed consent.”
I.e. he was APPEALING to the Japanese govt to greenlight IVM. FYI, he’s been doing this for at least the last six months. I know, I live in Japan and have been following IVM here very closely. The govt did not approve IVM and unfortunately there’s not much sign that they will. Merck (their brand Stromectol is the only IVM brand authorized in Japan) is actively campaigning against its use as they have been developing their own new novel drug and want that to be approved (way more money).”

Makes me wonder how it managed to get approval in Uttar Pradesh.

I’ve quietly asked around for doctors that don’t push the vax. I had planned on asking for the jab to go down the sink as you all suggest. But, the chances of me actually finding a doctor to do this is very slim. And if I did find one, then I’d have to ask myself if I’m really willing to go against my integrity. The only person I’m helping by faking the jab is myself. But if I say no and refuse to cooperate, will that help others in the long run? I just don’t know at this point.

Does anyone know if doctors are paid for each jab they distribute? I don’t quite understand why I’m being treated like a criminal for saying no. Something tells me there’s an incentive there, but if doctors were being paid, surely we’d have heard about it by now.

I think, if you can afford it, the best way to go about this is to be bold, refuse, and let them make their move. Whatever you do, I wish you all the best.

I think, if you can afford it, the best way to go about this is to be bold, refuse, and let them make their move. Whatever you do, I wish you all the best.