“Honey Laundering”: Most Honey Sold In US Stores is Fake 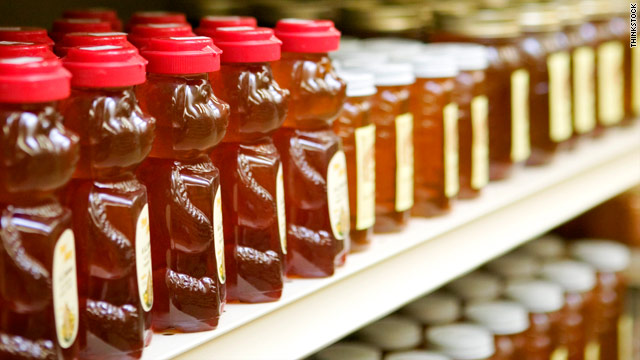 Testing conducted by Food Safety News finds that most honey sold in retail stores in the US isn't "honey".

More than three-fourths of the honey sold in U.S. grocery stores isn’t exactly what the bees produce, according to testing done exclusively for Food Safety News.

The results show that the pollen frequently has been filtered out of products labeled “honey.”

The removal of these microscopic particles from deep within a flower would make the nectar flunk the quality standards set by most of the world’s food safety agencies.

In the U.S., the Food and Drug Administration says that any product that’s been ultra-filtered and no longer contains pollen isn’t honey. However, the FDA isn’t checking honey sold here to see if it contains pollen.

Filtering out the pollen is more costly and reduces the health value and shelf-life of the final product. So why do it? To mask the orgins of where the 'honey' came from:

Ultra filtering is a high-tech procedure where honey is heated, sometimes watered down and then forced at high pressure through extremely small filters to remove pollen, which is the only foolproof sign identifying the source of the honey. It is a spin-off of a technique refined by the Chinese, who have illegally dumped tons of their honey – some containing illegal antibiotics – on the U.S. market for years.

The food safety divisions of the  World Health Organization, the European Commission and dozens of others also have ruled that without pollen there is no way to determine whether the honey came from legitimate and safe sources.

Food Safety News decided to test honey sold in various outlets after its earlier investigation found U.S. groceries flooded with Indian honey banned in Europe as unsafe because of contamination with antibiotics, heavy metal and a total lack of pollen which prevented tracking its origin.

Removal of all pollen from honey “makes no sense” and is completely contrary to marketing the highest quality product possible, Mark Jensen, president of the American Honey Producers Association, told Food Safety News.

“I don’t know of any U.S. producer that would want to do that. Elimination of all pollen can only be achieved by ultra-filtering and this filtration process does nothing but cost money and diminish the quality of the honey,” Jensen said.

“There is only one reason to ultra-filter honey and there’s nothing good about it,” he says.

In addition to using harmful pesiticides and antibiotics, this "laundered" honey is often diluted with corn syrup and other illegal sweeteners.

Food Safety News funded testing of 'honey' from the major sellers. Here are the top-line results:

Food Safety News purchased more than 60 jars, jugs and plastic bears of honey in 10 states and the District of Columbia.

The contents were analyzed for pollen by Vaughn Bryant, a professor at Texas A&M University and one of the nation’s premier melissopalynologists, or investigators of pollen in honey.

Bryant, who is director of the Palynology Research Laboratory, found that among the containers of honey provided by Food Safety News:

Food Saftey News' report is worth reading in full.

Just one more validating reason why keeping bees is important…

Note: If you're reading this and are not yet a member of Peak Prosperity's Beekeeping Group, please consider joining it now. It's where our active community of bee enthusiasts share information, insights and knowledgable daily discussion to help each other support and nuture the pollinators our food supply is so dependent on. Simply go here and click the "Join Today" button.