Here Is What They Are Scared Of

Controversial hypothesis: Ivermectin didn’t stop India’s outbreak – herd immunity did.  I know, I’ve been babbling about herd immunity now for a year.  But like a stopped clock, eventually I’ll be right.  And – “I really do think I’m right this time.”

Citing ICMR’s fourth national COVID-19 serosurvey that was conducted in June and July, the Centre said that the overall seroprevalence was 67.6 per cent. It involved over 28,975 individuals (adults and children), apart from 7,252 healthcare workers, in 70 districts across 21 states where earlier three rounds were also conducted.

The seroprevalence in rural areas was found to be 66.7 per cent and slightly higher in urban at 69.6 per cent.

Almost no difference between the farms and the city.  Delta is just that infectious.

So how does this relate to my title: “what are they scared of?”

The India (Delta) variant is basically a mass airborne natural vaccination event.  It was 12 weeks, start-to-finish.  In the US, I’m guessing in 11 weeks, it will all be over with.  Most everyone will “have the shot” when it is all over, more or less.  That’s just pandemic math, assuming a similar R0.

So what are they terrified about?  I believe our “health authorities” are terrified that this pandemic will really be over once Delta moves through the population.  After Delta, there will be no more waves of this virus.  They know this.  That’s my hypothesis.

So for them – literally – time is running out.  This “emergency” now has a easy-to-calculate end-date.  This is just pandemic math.  It is now-or-never, gun-to-everyone’s-head right freaking now, before the emergency fades away into dust.  The Delta Mass-Natural-Vaccination Event is coming!  They need to give everyone the experimental shot while they still have a motivated bunch of customers.  Once COVID is gone – only the covid-terrified will want the every-six-month booster shots. 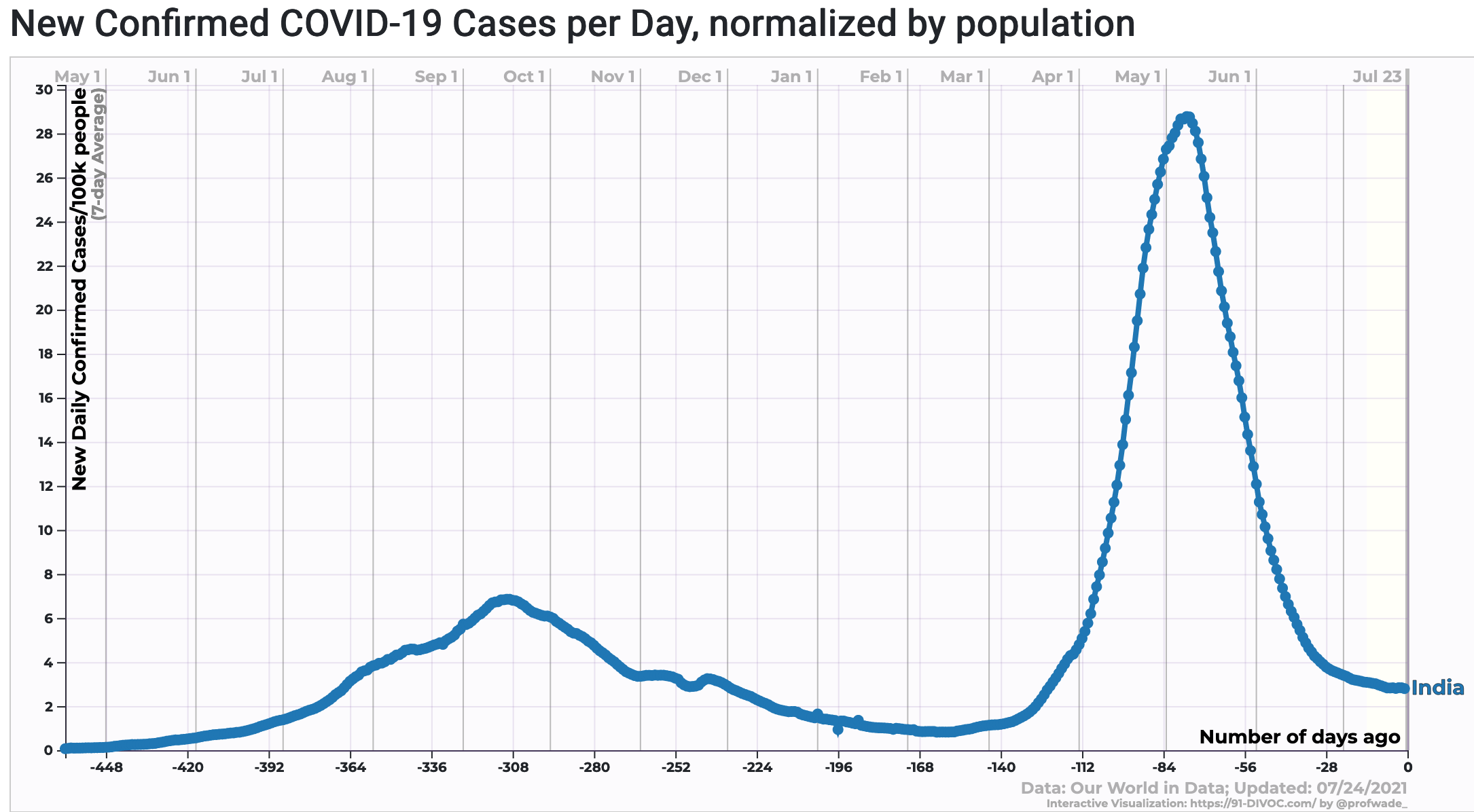 @Canuck21: Exactly my concern here too, a lot of evidence pointing this way already if I’m not mistaken. Though little evidence of ADE so far. I wouldn’t put my money on any scenario for this winter.

How does your theory jib with that one province in India refusing ivermectin (Goa – I think) and having lots of cases. I don’t know if it still is having problems. I found this site but could not make heads or tails of it: https://www.ndtv.com/coronavirus/india-covid-19-tracker

He says it is his final diatribe until he tells the world I Told You So late fall, if what he anticipates develops.  He does go into what he believes is proof of ADE.  Much of it is an explanation for why Warp Speed had to be speedy to get through.

Interesting thoughts. I guess it depends upon how much of literally everything we know, see, and experience is manufactured….and exactly how much manipulation is going on vs organic reality.

So, its pretty much understood now that this is a bioweapon developed in a lab and disseminated intentionally. It is possible that it “escaped” unintentionally due to a “leak”, but that seems far fetched. If it was developed intentionally, then there was deliberate INTENT at some level. You dont develop bioweapons for no reason.

If somebody points a loaded gun at you, and you get shot…its going to be difficult to believe that they pulled the trigger by accident. The fact that they brought a gun, loaded it, and point it at you demonstrates their intent. After you get shot and questions get asked they might say “well I just meant to scare him but my finger slipped”. No reasonable person is going to believe that….even if true, the intent was there from the moment they pointed that loaded gun.

OK so I work with the basic premise that this was developed and disseminated with intent. That seems the most reasonable likelihood to me. If so, dont you think the people who developed this thing already know the course of the disease and have a plan with multiple contingencies? It seems likely to me [ but now I am going further out onto the speculative branch ], that they have another virus waiting in the wings should they need one….which they can characterize as another “variant”.

The other question would be, how much of what we hear is actually true? Is there even a Delta variant at all? You have to consider, as they have been caught in so many lies already, couldnt they just claim there is a new variant and manufacture numbers? Are we at that point?

I guess what I am saying is, once you introduce lies and corruption, we really have no way of knowing anything. Its like money printing and financial manipulation…how do you get to true price discovery?

The Karl Denninger article linked to by Kat 43 (hat tip) says this:

“Even worse is that the data includes some people who recovered and then were stupid enough to take the jab anyway and it increased their risk of symptomatic disease over the other cohort which recovered and did not get vaccinated.  In other words they didn’t get more protection by taking the shot after recovery they destroyed a large part of their existing protection, specifically, existing nucleocapsid recognition. ”

I have no idea if what he says is correct or not.

I guess it depends upon how much of literally everything we know, see, and experience is manufactured….and exactly how much manipulation is going on vs organic reality.

I struggle with this a lot. I know that Chris is going to reorganize the website. It would be nice to have a section dedicated to important Covid 19 related questions.

1) How much protection do the various vaccines actually give against infection, mild symptoms, moderate symptoms, serious symptoms, hospitalization, death?

2) Can asymptomatic people pass the disease? If so, to what extent?

3) Can vaccinated people transmit the disease? If so, to what extent?

4) What are the real adverse events statistics of the various vaccines? How many people really die, are disabled, suffer ongoing effects? What are the most common adverse effects?

5) How serious is the Delta variant? What is the real case fatality ratio? What percentage of infected people are hospitalized, end up with “long haul” syndrome?

If there was one section dedicated  to such issues, PP’ers could post studies, articles, commentary, etc., about important issues. Everyone would be able to use that research base to enable them to make the most informed decisions possible.

Right now, there is a lot of information on these issues here but it is scattered and difficult to put together.

In short, we know that the captive media is simply a propaganda platform. Wouldn’t it be nice to searchable base of information in one place helping to answer crucial questions.

I believe our “health authorities” are terrified that this pandemic will really be over once Delta moves through the population.

I feel the same way.

For the Powers-That-Be the pandemic was greatest thing since 911. It was actually more useful than 911 since it actually moved into every neighborhood. It was not just something on television.

But the pandemic seems to be waning. CNN can scream all they want. But people see that all their neighbors are generally okay.

Whatever it is the PTB is trying to accomplish, they have to move fast.