I had a request to pull this discussion out of my weekly report, and into a forum topic of its own.  So here it is again:

For SC2, the experts say that the Herd Immunity Threshold (HIT) is 60-70%. However, this is only true in the following cases:

a) if vaccines are used to provide immunity, HIT is 60-70%, because vaccines are essentially given to people selected at random.
b) if an epidemic occurs in a population with a uniform susceptibility and exposure profiles to the virus (i.e. if we’re all identically configured biological robots)

In a natural epidemic, with variability in the population, this isn’t the case. Turns out (spoiler alert), herd immunity could be a lot lower than 70%.

How varying estimates of CV drive this key Herd Immunity Threshold level is explored in the following paper:

Susceptibility: how easy is it for someone to get infected. This is driven by all sorts of things; age, vitamin-D levels, blood type, immune system strength, etc, and depends on how the virus interacts with people.

Exposure: how frequently and with what intensity are people exposed to the virus. It is driven by patterns of connectivity among individuals in society; this includes number of social connections, as well as physical enclosures such as subways, buses, and shared air-conditioned spaces.

The higher the differences in the population, both for susceptibility, and exposure, the lower the Herd Immunity Threshold.

Why is this? Well, if variability is high (say, 90% of people have 5 social connections, and 10% have 50 social connections), this means that a relatively smaller group of super-spreaders are responsible for the vast bulk of infections.  Same is true for those who are can easily catch the virus.  They get the virus first, and while they are able, they spread it to others.  But once they recover, or they die, they don’t spread virus any longer.  Herd = largely immune.

If variability is low – i.e. if we are all identical biological robots – if we all have 5 social connections, and we all take the subway, we all have roughly the same-strength immune system, then CV=1, and that gets you an HIT of 60-70%. There are no super-spreaders the virus can take out to save the rest of us.

But in a normal population, there is much more variability in both susceptibility to the virus (obese, unhealthy, diabetic, vit-D deficient, low immune system), as well as variability in exposure (i.e. social connectivity, use of transport, etc). The paper postulates a CV=3 for SC2. With a CV=3, epidemic math spits out a HIT of 10-20%.

Guess what? New York City serology testing in May reported 25% of the population tests positive for SC2.

Based on this, alongside the paper above, along with the fact that cases are not spiking in NYC today regardless of the past month of “a lot of  activity”, I conclude that NYC probably has herd immunity.  3.77 cases/100k, and 0.23 deaths/100k, which is a 20x reduction in cases, and a 40x reduction in deaths vs the peak in early April. 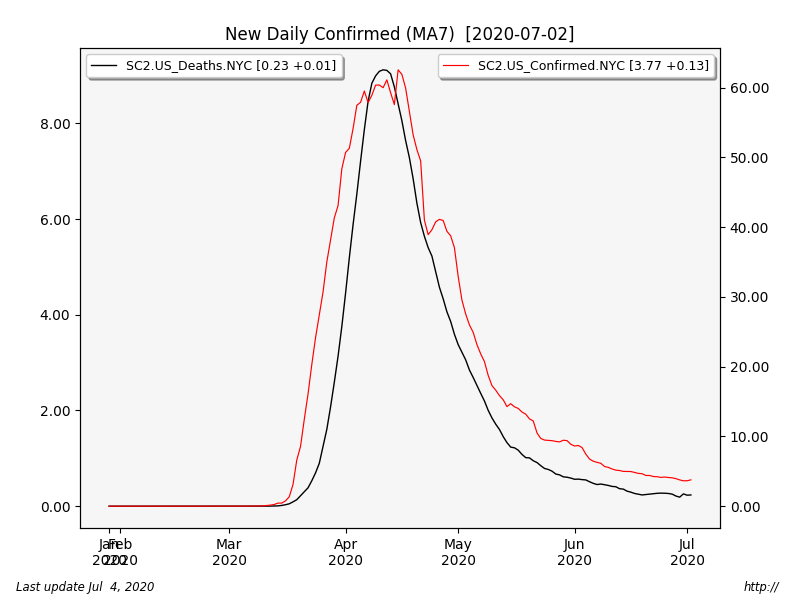 So how do we detect herd immunity in the charts in other regions?

If we use NYC as a template, it appears to be a roughly 8-week process, with the peak coming roughly on week #4.

Of course, each area has its own CV, based on variability of susceptibility and exposure of the population. NYC: subway use, population density, multi-generational family living arrangements, Vit-D deficiency, etc. Other areas will probably have lower CV values, which will probably result in higher HIT levels, and a flatter overall curve.

The takeaway: once the super-spreaders (high exposure + highly susceptible people) become immune (or…die), the pandemic is largely over for that area.

Paradoxically, lockdowns will make this process take longer.  Lockdowns act to flatten social variability.  By design, they reduce CV, but that – unfortunately – increases the effective HIT.  Lock down the super spreaders along with everyone else = they don’t get sick = they are waiting on the sidelines to spread the virus once the lockdowns are over.

I believe we are seeing this process unfolding right now in the US; Florida, Texas, Arizona, etc.

Lockdown unintended consequence: the longer we remain locked down, more people will have to get sick in order to reach Herd Immunity.

An interesting paper from Sweden found T-Cell immunity in people with very mild or asymptomatic COVID infections, (including by exposure to a sick family member with no evidence of personal infection), even when their antibodies were low or absent.

T-Cell Immunity can exist even if a patient has no detectable antibodies to COVID.

A facebook friend who is a ED doc at Mount Sinai Hospital in NYC says that today (July 4, 2020), they do not have ANY COVID patients in their ED.  This is a first.

I am including the above Swedish study and comment in a thread about HIT as the T-Cell immunity may offer an explanation for the discrepancy between the low and fading antibody levels after COVID infection, and, the appearance that some immunity is evident in the population.

Twitter Gummi Bear has a chart of COVID Deaths in Stockholm and Sweden-ex-Stockholm.  It appears that a peak was reached and passed. 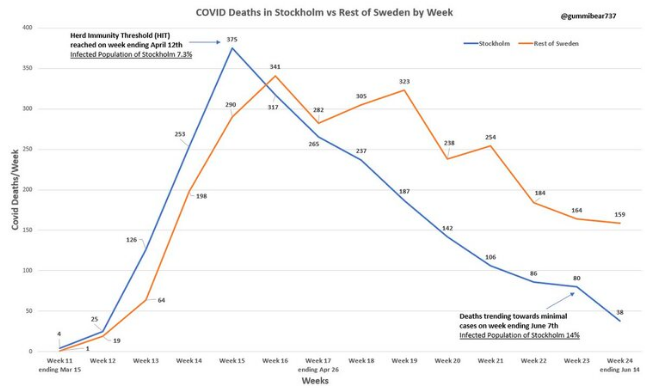 This, and combined with the JB Handley blog post.

Is the math plausible and does it make sense? check

Does it make common sense? check

Good enough for me.